Salve,
some time ago, in this post I showed a sketch of a horseman leading a 'rumak' dariocaballeros. vivat-kielbaa
well,  inspired by  an image of the saddle of one of our Polish-Lithuanian kings I added some detail in that drawing - 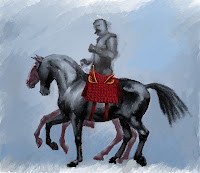 The image of this saddle comes from the Polish Army Museum that  has on its website a photo of king Stanisław Leszczyński's saddle, circa 1704-05 http://www.muzeumwp.pl/emwpaedia/siodlo-koronacyjne-stanislawa-leszczynskiego-z-1704-roku.php 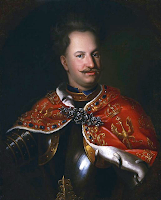 This saddle  is traditionally associated with our king Stanisław 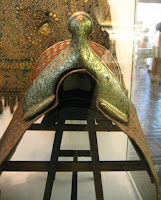 and his first coronation during the Great Northern War. The saddle has a wooden tree (most likely covered with birch-bark for waterproofing and strengthening) covered  with leather underneath and on top with carmine silk velvet,  embroidered with flower motif covering the entire textile cover of the saddle, its embroidery was done with silver thread/yarn.  The saddle was richly ornamented, the pommel, cantle, and saddle tree bars had been covered with silver 'sheet metal' that in turn was gilded with gold. Also a floral ornamental motif was etched into the sheet metal, very precise and carefully executed. 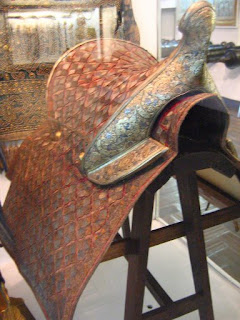 Saddle flaps/skirts were first strengthened with leather dyed red and then covered with the same textile as saddle tree, while the cinch (double) was made out of doubled leather stitched  together and adorned with silver threat. The  stirrups did not survive the winds of time, unfortunately neither did the shabraque, crupper, breastplate and bridle with the bit...
This is not the winged hussar 'kulbaka' (then lancer deeper saddle) yet has characteristics typical to the Polish saddles made during the second half of XVII century made by various manufacturers in the royal city of  Lwów - unfortunately thanks to Stalin, Roosevelt and Churchill not in Poland of today ( for more reading please see Zdzisław Żygulski jr study of Polish saddles of the period written in 1950s).
Posted by Dario T. W. at Wednesday, July 06, 2011

A fine entry as always ! I wonder what study of Żygulski you had in mind that deals with the topic of Polish saddlery (hussar kubalka in particular)? Also are there any scholarly works dealing with period Polish horseflesh as used by hussaria et al.?

Splendid - many thanks for the reply!