Achaemenid horsemen from Troad - Can Sarcophagus

Brave Ukrainians are defending themselves from the Russian invasion, Gods speed - but there must be peace again, the war must stop and Ukraine returned to status quo ante, with reparations and compensation from the Russian government. 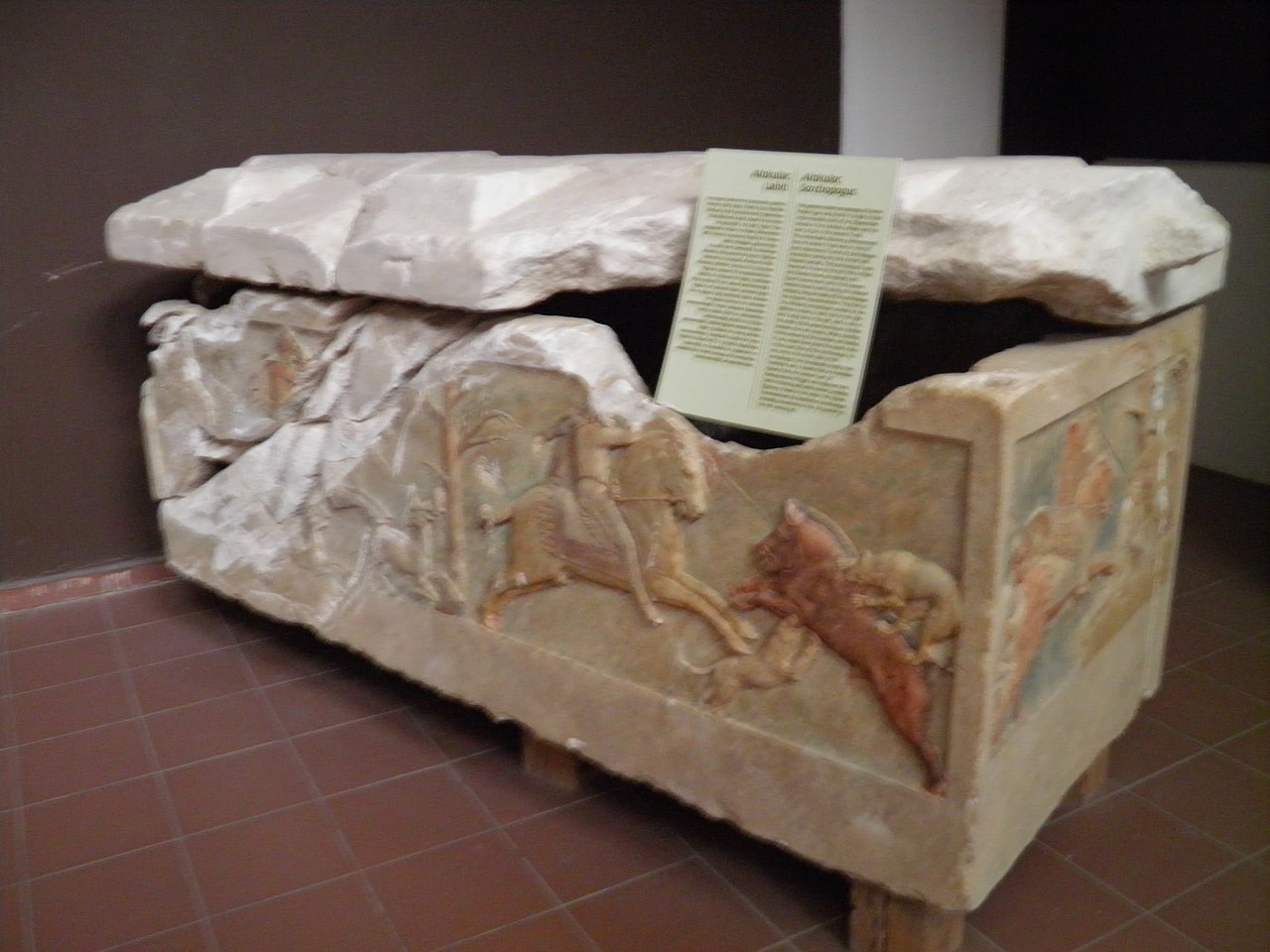 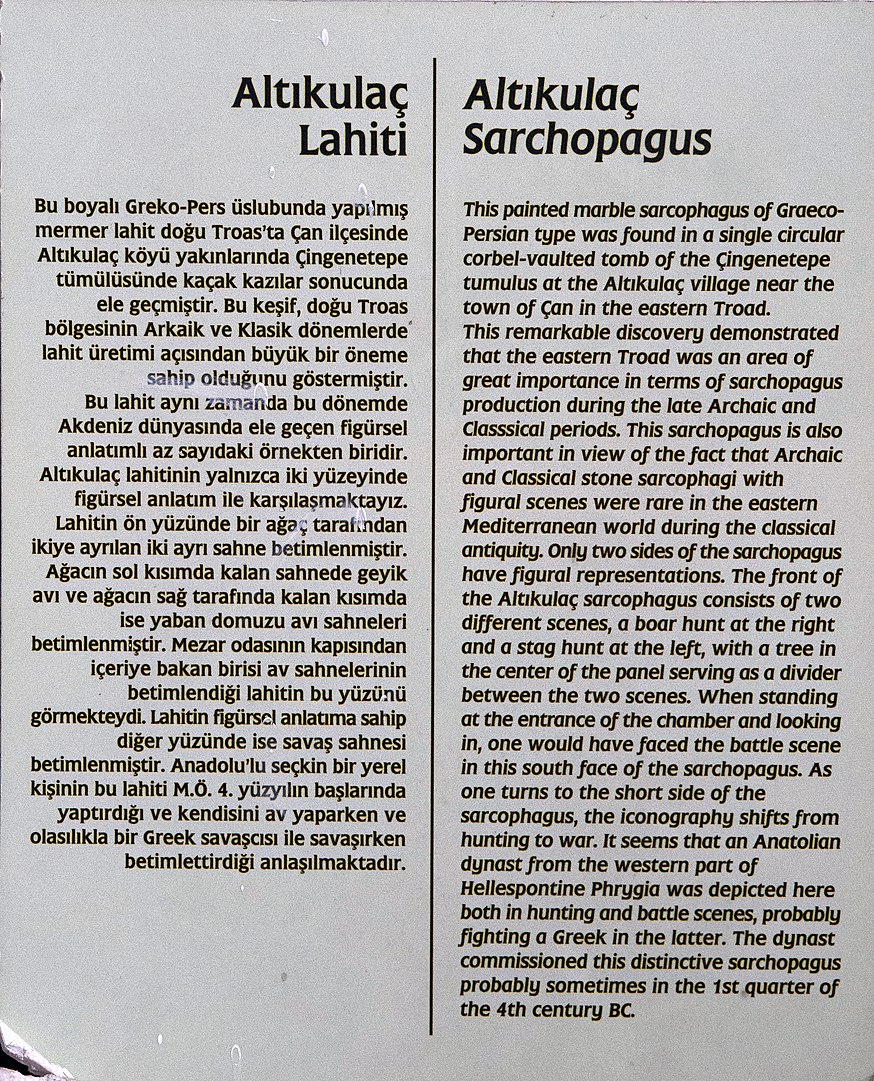 let us canter across the Mediterranean Sea to Anatolia, or Asian part of  Republic of Turkey, where in Troad, near Canakkale, there is a grouping of ancient Persian tombs including surviving sarcophagi from the Achaemenid Imperial era. One of such tombs is  the 'Can Sarcophagus.' It was discovered circa 1998, and is dated the beginning of the IV century B.C. There was a 22-27 years old male buried in the tumulus( based on the osteological analysis). The subject matter is hunt and war - all on horseback, perhaps the most favorite activity of the Achaemenid Empire warrior. 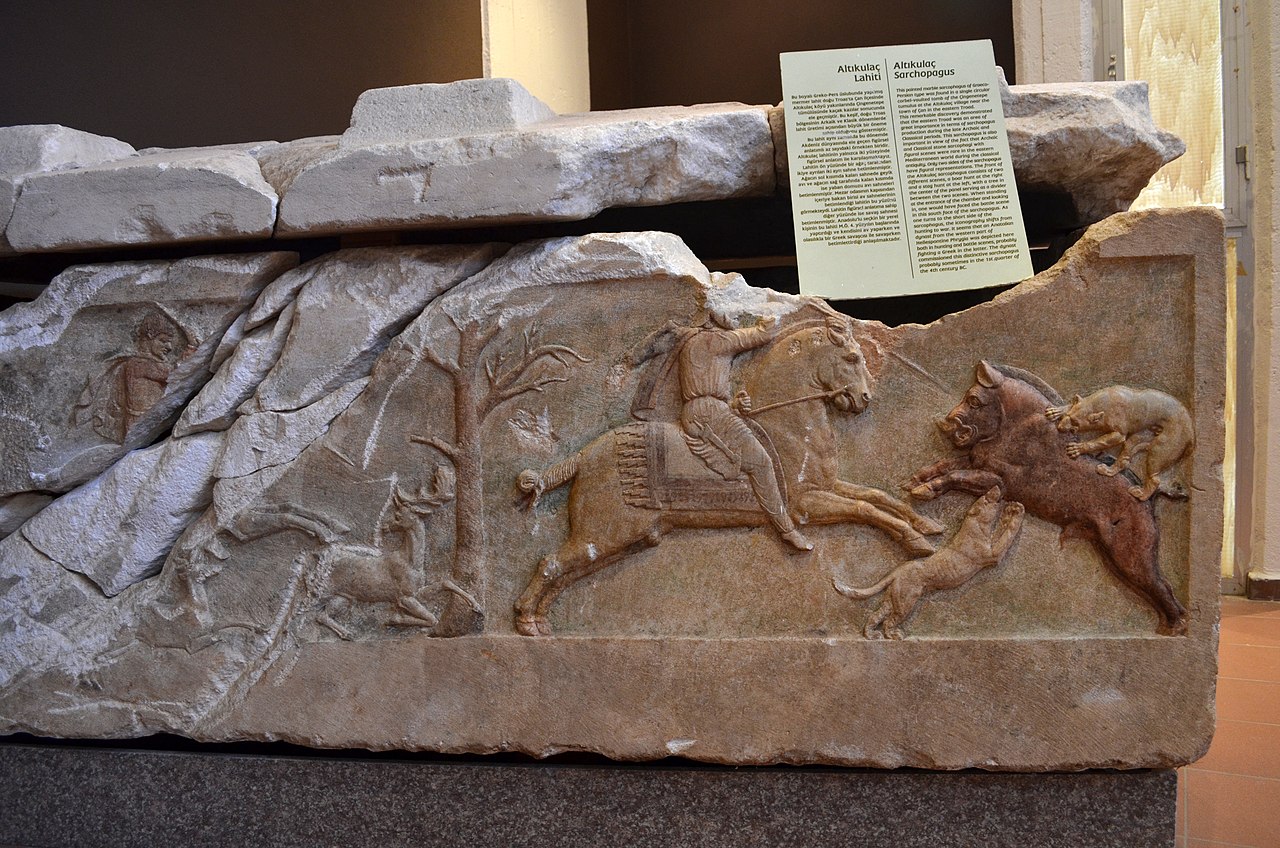 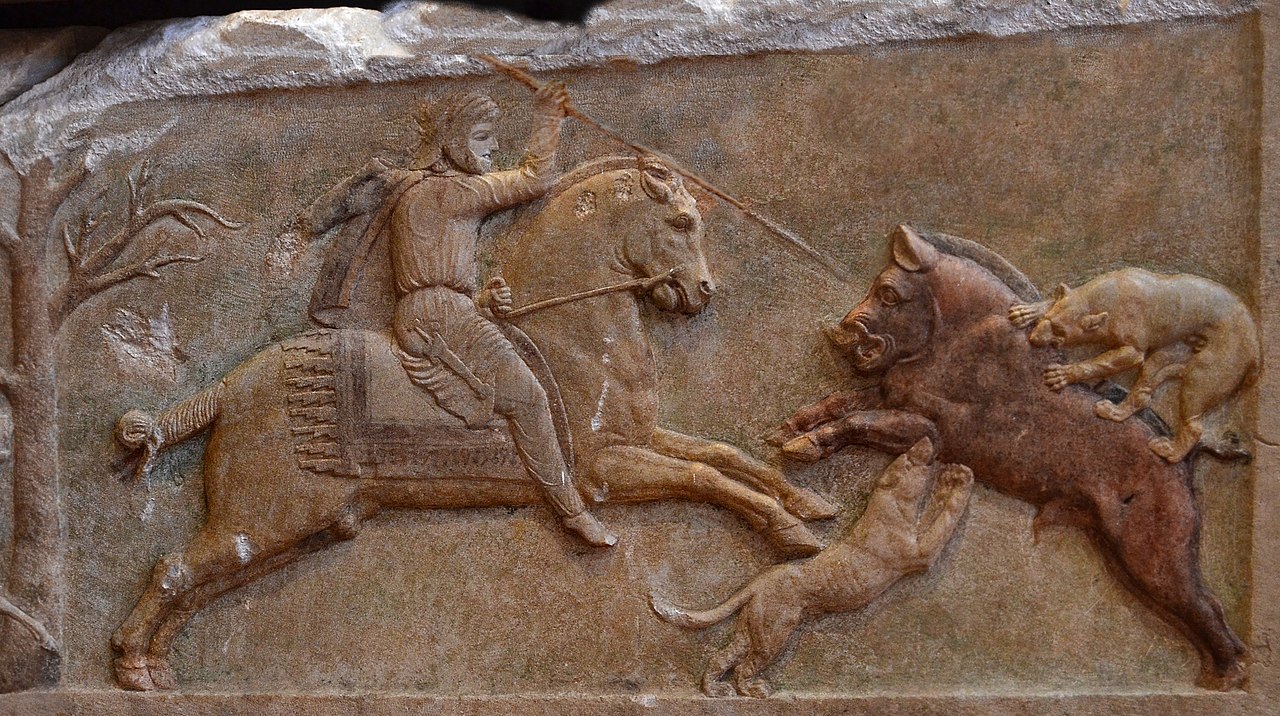 On Academia there are certainly good articles to familiarize oneself with the topic - these Persian horsemen and their adversaries and prey.
eg the discovery,  on the Mysians, or even on the Persian (Achaemenid) armor.  So enjoy the reading while some of the images are attache to the post to whet your appetite for reading more about it. 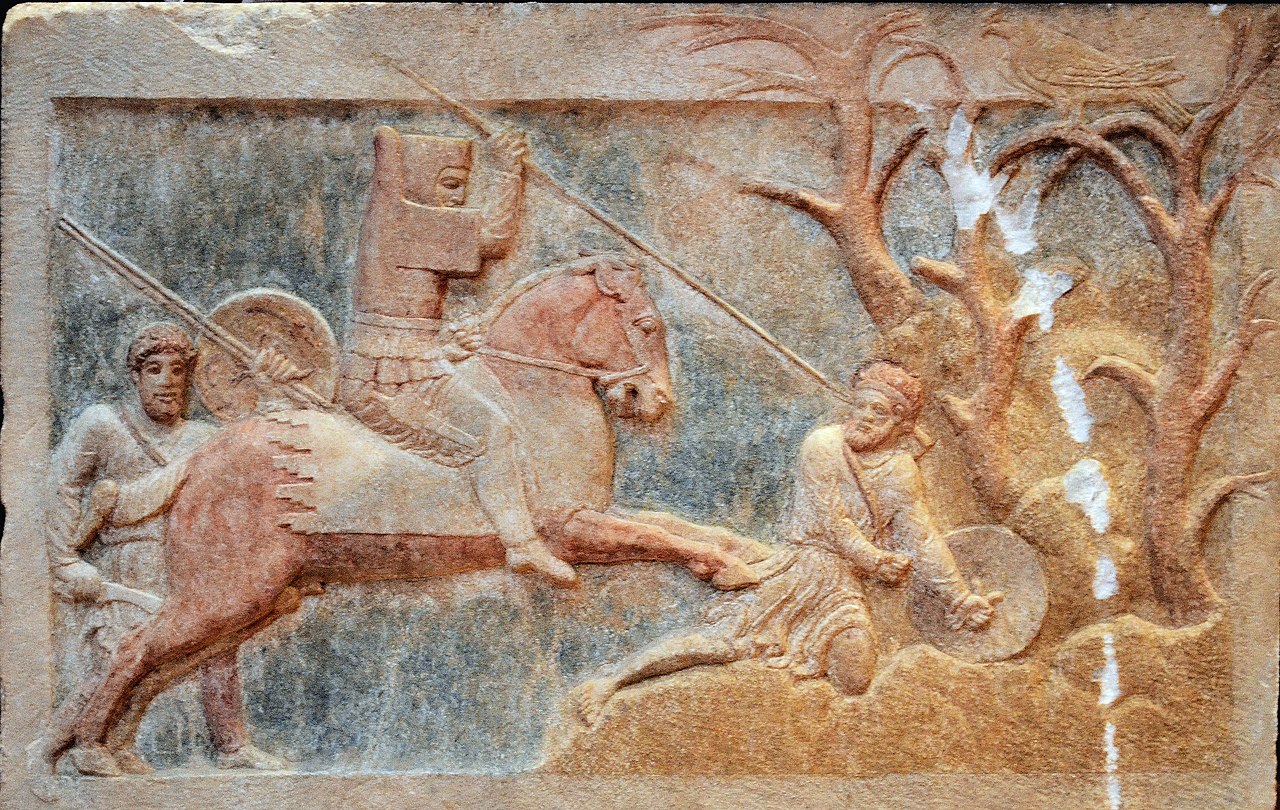 I have read some of Adam Zamoyski's works, and recently I reread his book book - Napoleon. The Man Behind the Myth. - from 2018AD.

here you can listen to the author,  himself the scion of Poland's famous Zamoyski clan, Jelita coat of arms,  presenting his book. Another audio by the author himself.
The debate between two historians, Adam Zamoyski vs Andrew Roberts , on Napoleon (2014).
and perhaps a proper illustration to this post - a painting by Wojciech Kossak 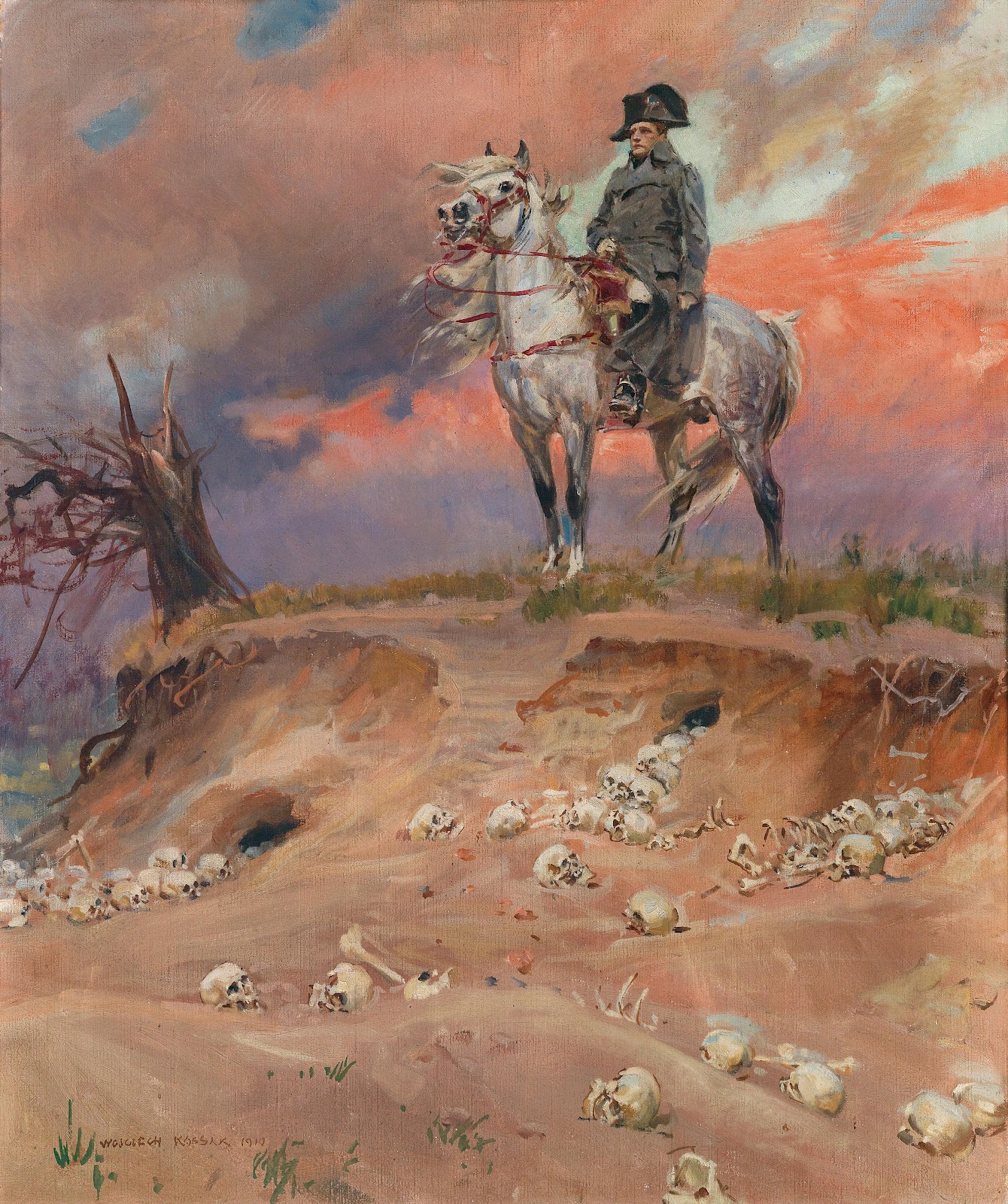 May you be happy, joyful and full of energy.
May peace return to Ukraine .

Below there are some Easter/Resurrection related XVI century works of religious art . 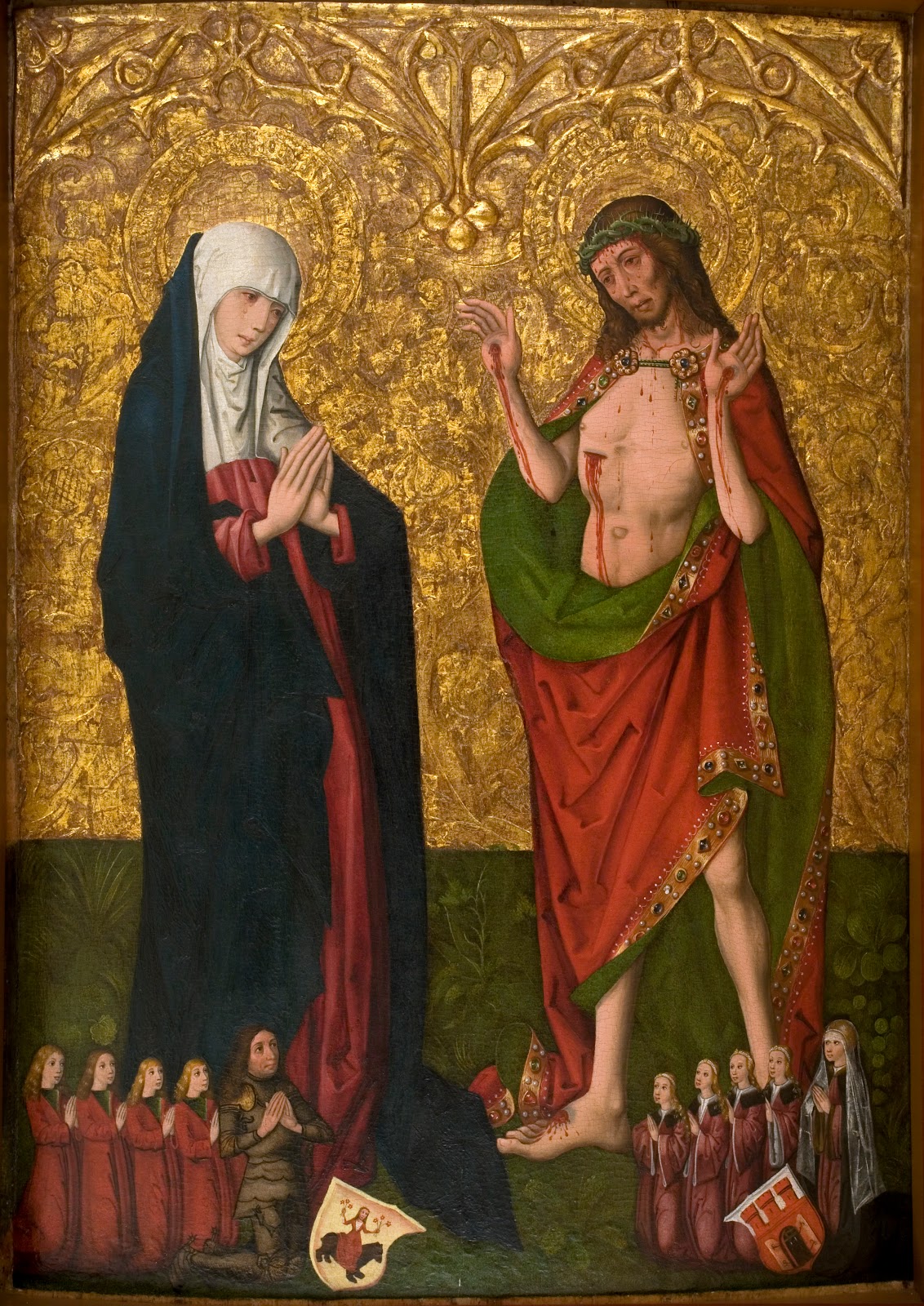 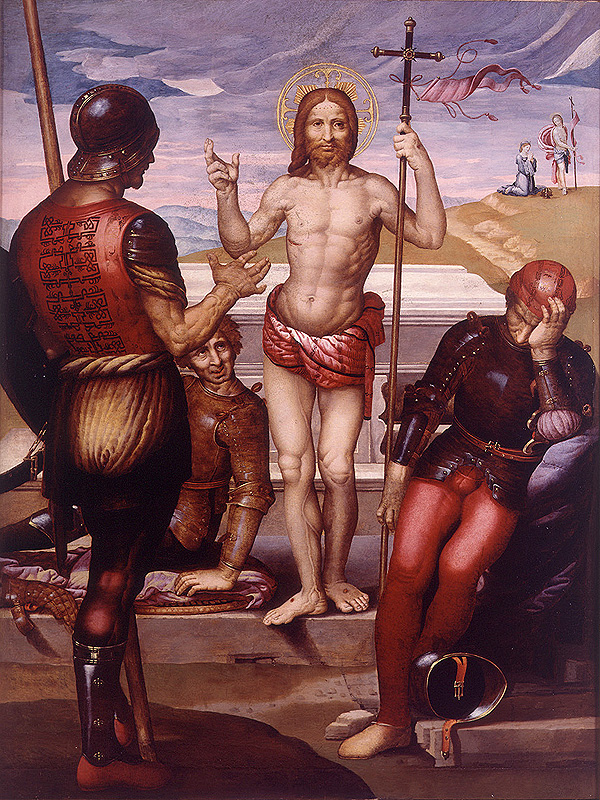 * The follower of Hans Memling 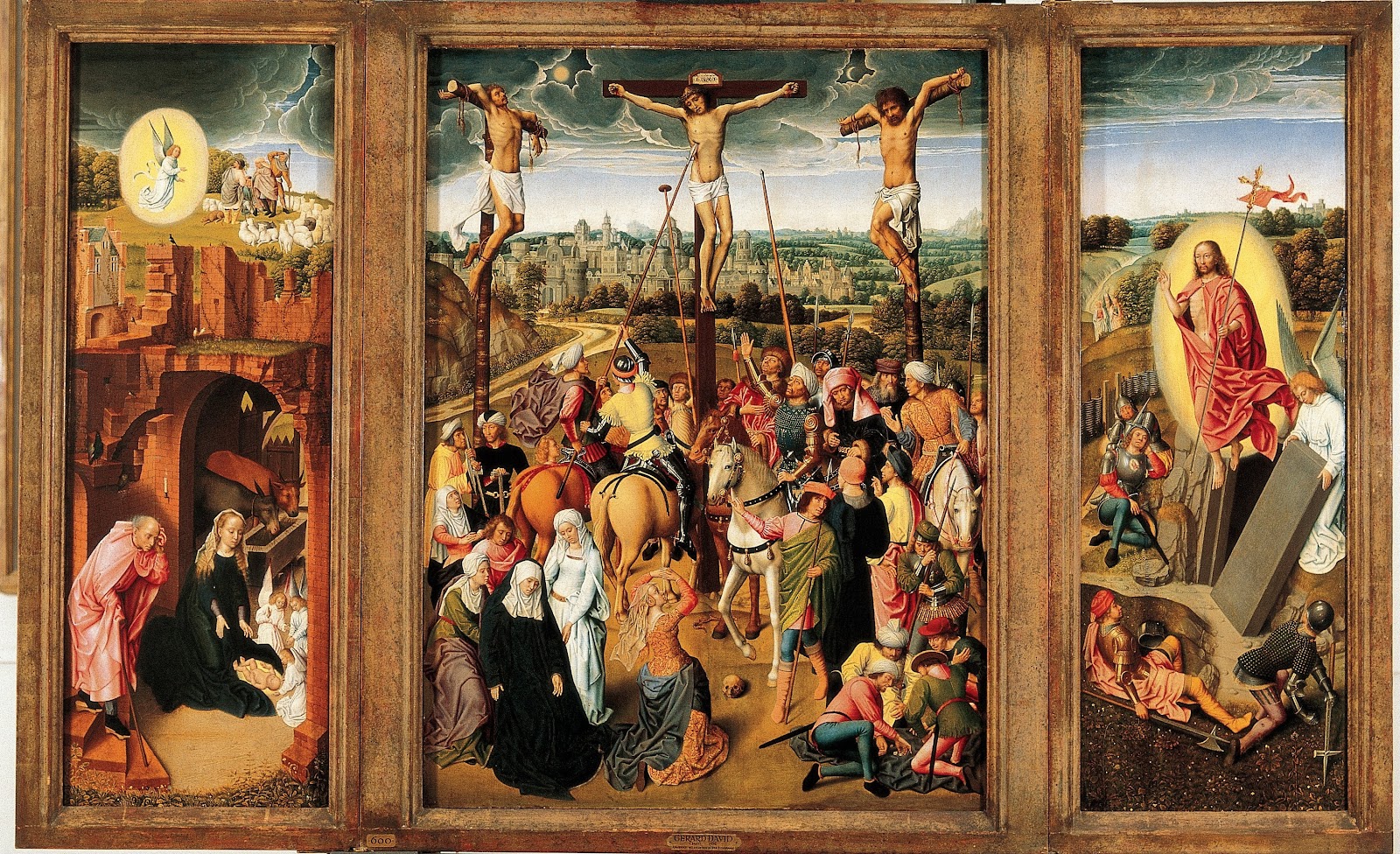 Peace in Ukraine- may health and joy return. Mariupol after more than a month of urban combat is but a skeletal remainder of the vibrant  pre-24th of Feburary 2022 city. Pacem Eaternam to all who have fallen in this invasion.

Good Saturday or Easter Eve is a good day to bring back the other painting by Jozef Chelmonski - Four in Hand or Czworka from Warsaw's National Museum. Very similar to or different in some details from  the one from Krakow National Museum, it is another magnificent canvass by the master of horse foreshortening, furious action, landscape and joy of life

In 1874 Jozef Chelmonski made a trip to or escaped  from the Munich art world to the limitless skies of Ukraine. By what his contemporaries and he considered Ukraine should be explained first. For the XIX century Polish world Ukraine* constituted lands beyond Pinsk Marshes, Podolia and Volhynia, those rich soil steppes and rivers and expanses around the ancient Kijow (Kiiv/Kiev) and beyond the great river  Dniepr   into the expanses of the Pontic Steppes.  According to many contemporary sources and his own letters to friends and associates  Jozef Chelmonski loved his trips to the Ukrainian lands, for he loved the light there, and  painting  people and landscapes of the distant Ukraine gave him pleasure and enjoyment. Tadeusz Matuszczak, author of the 2003 monograph about Chelmonski, wrote that Chelmonski had an exceptional visual memory and ability to record images and action in his mind. Antoni Piotrowski, Polish painter who knew well pan Jozef , studied together under master teacher Wojciech Gerson in Warsaw, and consequently wrote his recollections about Chelmonski in 1918, stated that Chelmonski possessed extraordinary ability to record visual images and could 'arrest' images in his mind, so when he returned from his trip in Ukraine he painted various canvasses recreating impressions recorded in his mind. Hence, his galloping horses and flying horse teams  and other spirited riders and mundane cavalry columns.
Nota bene famous Polish and American actress Helena Modrzejewska was very friendly with Wojciech Gerson's atelier, knew and enjoyed Jozef Chelmonski's brushworks and when she left for USA she took with her one of his paintings -  Return from a ball or night sleigh ride (1873).
***

enjoy your Pisanki painting day, I am about to paint some today. 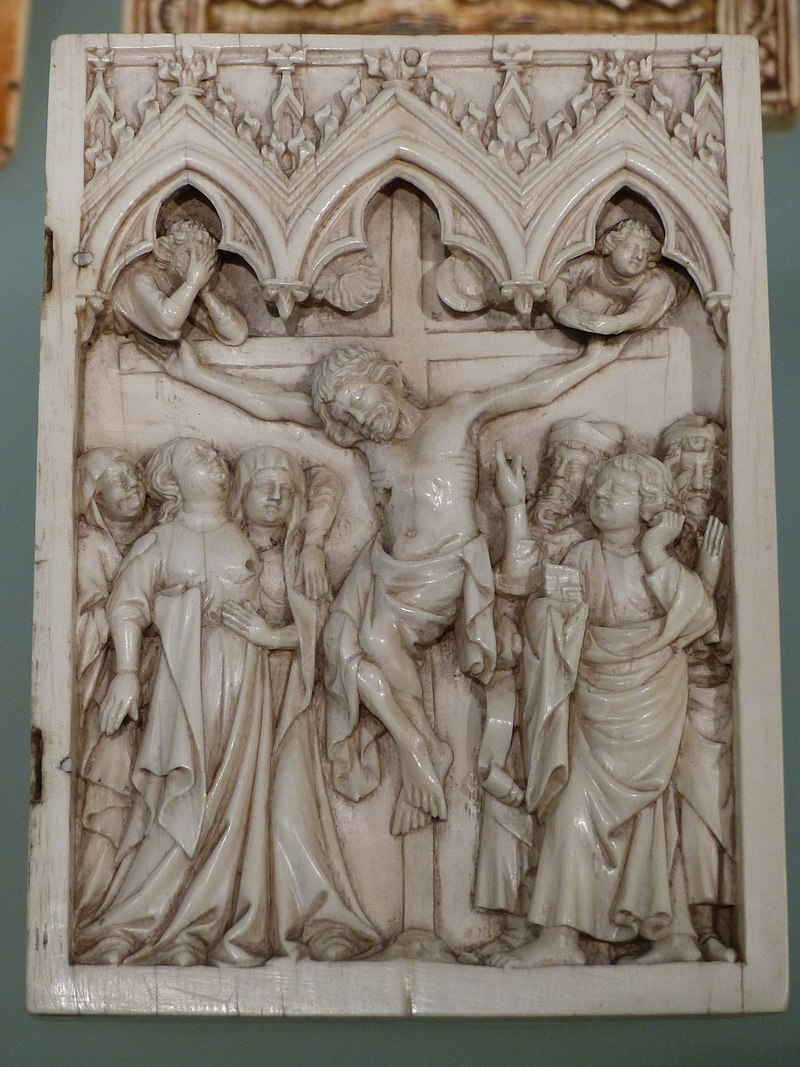 the brutal Russian aggression in Ukraine continues - peace must return.

Good Friday and Crucifixion of our Lord Jesus, who died for our sins.

For today some XVI century art 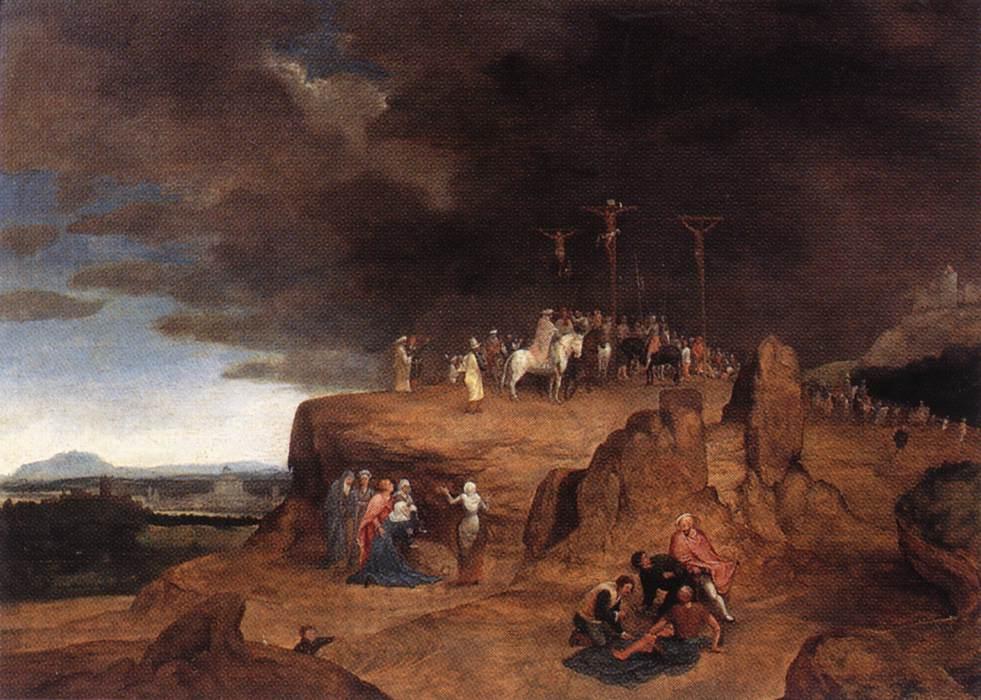 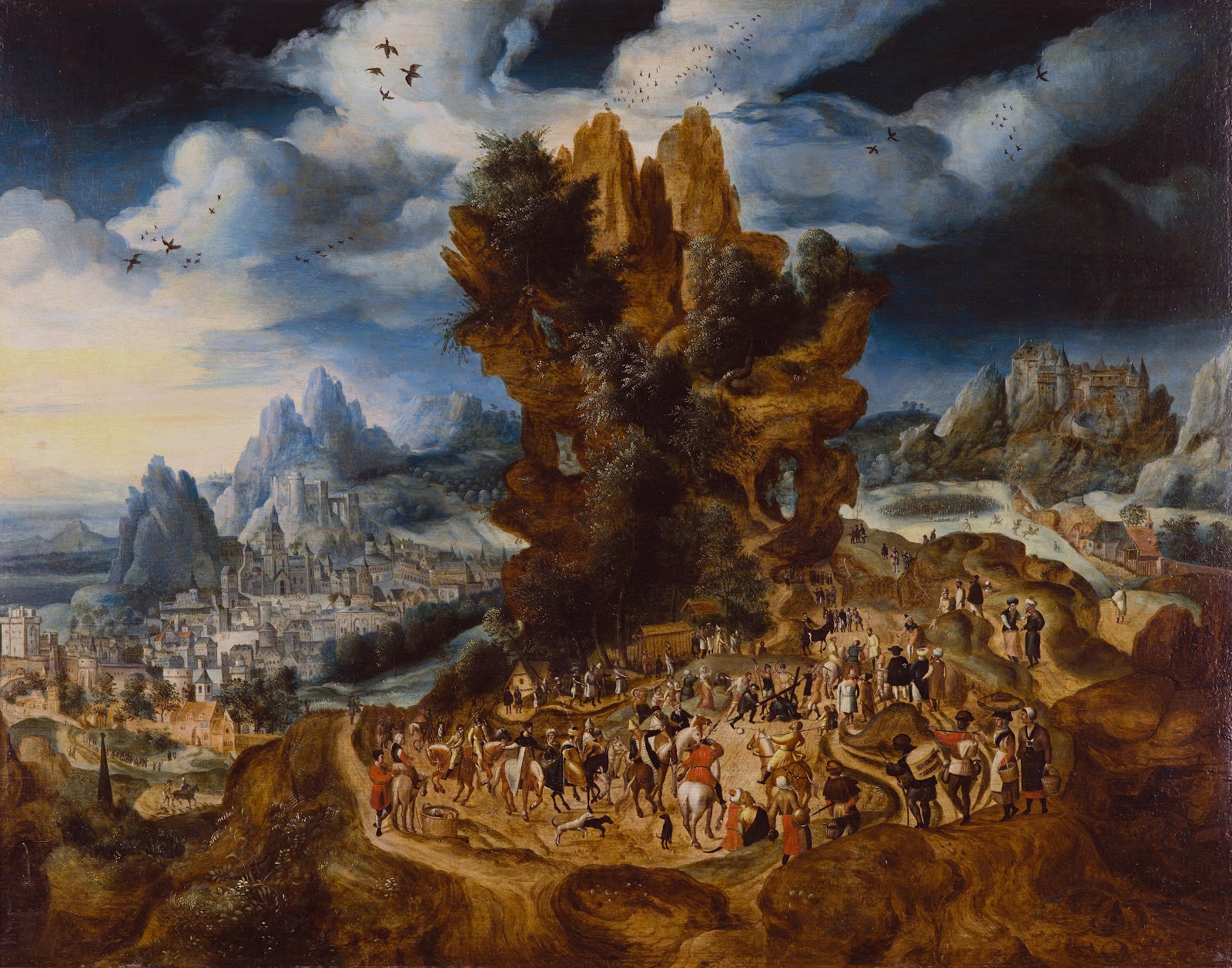 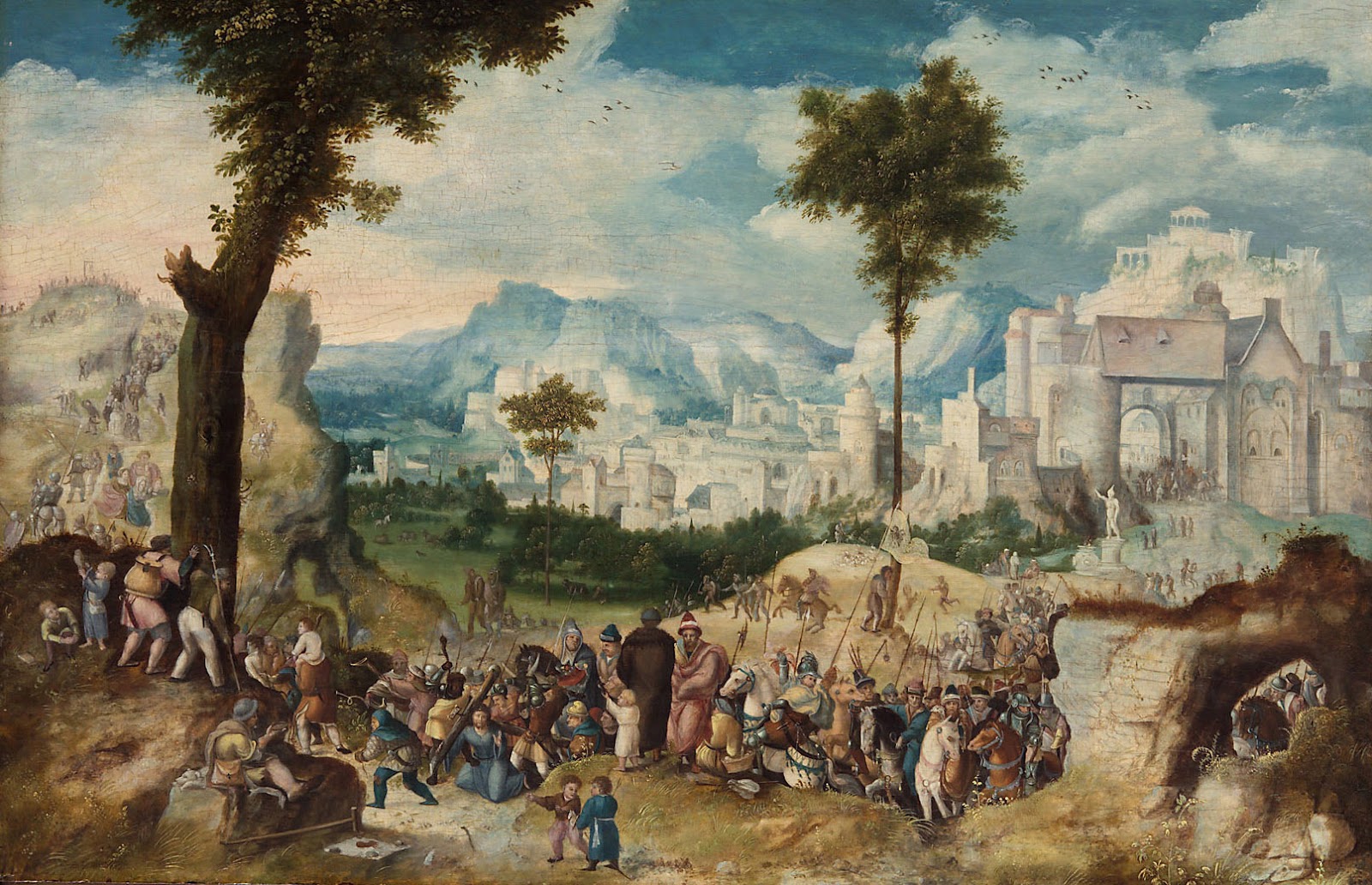 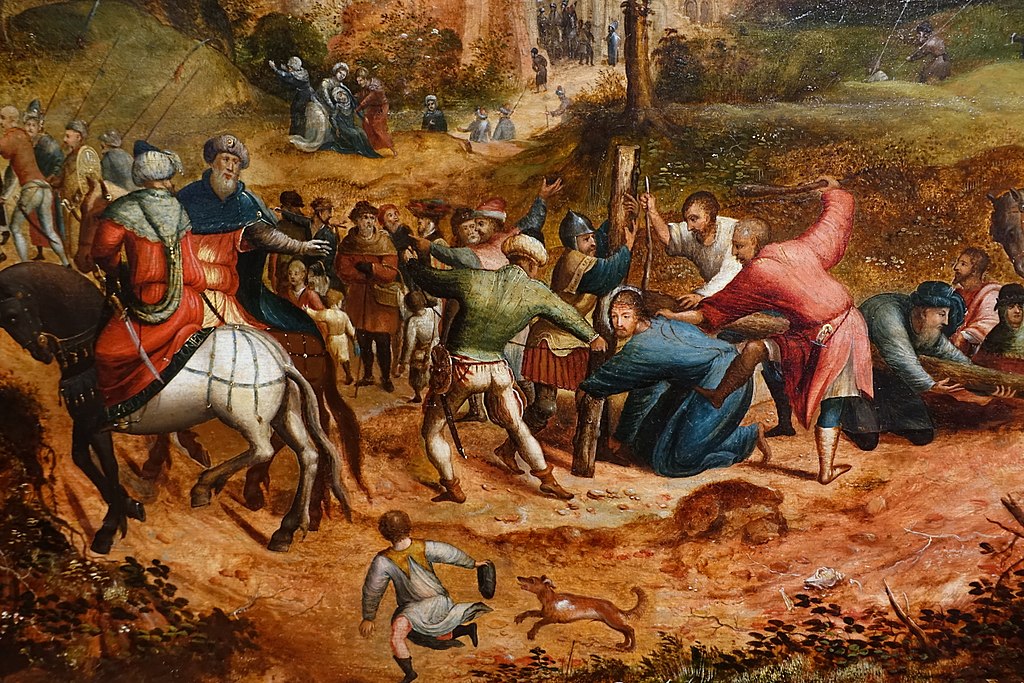 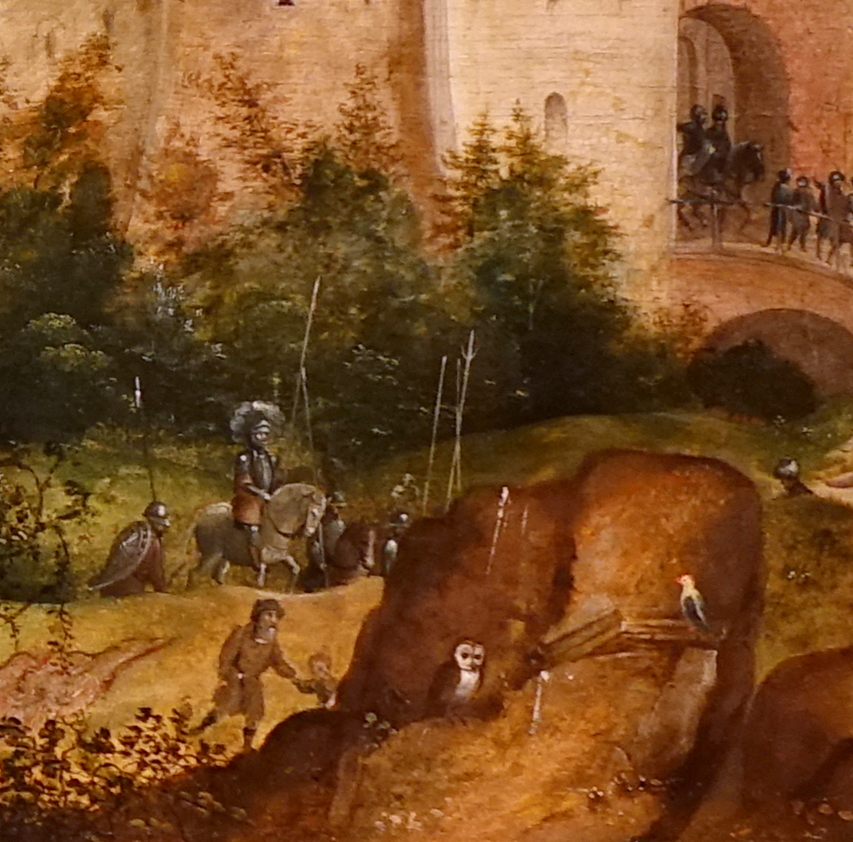 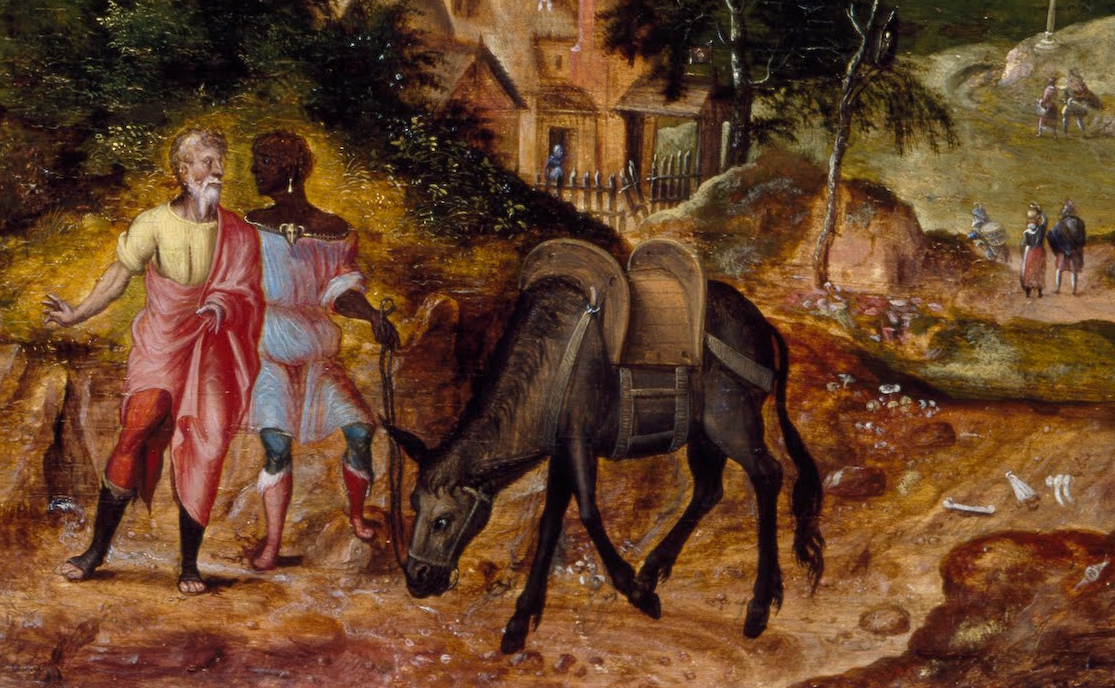 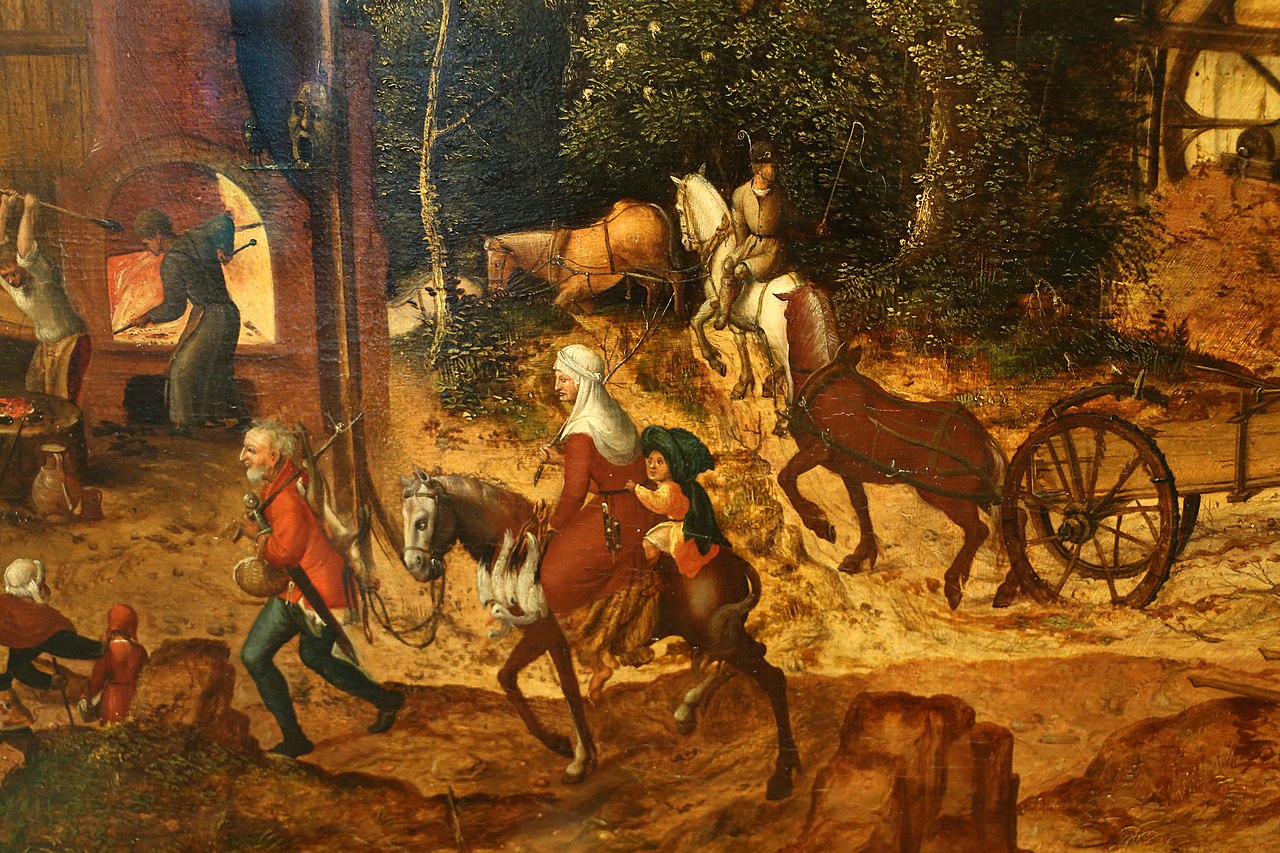 Ukraine is in flames -  outnumbered and outgunned Ukrainian soldiers and militiamen are still defending parts of the city of Mariupol - they are heroes of this Ruso-Ukrainian war.  -  do let the peace return. Ukrainian refugees in Poland are still growing(more than 2,3 million in 47 days!!), and I daresay soon the Poles will become overwhelmed without help from USA and EU. 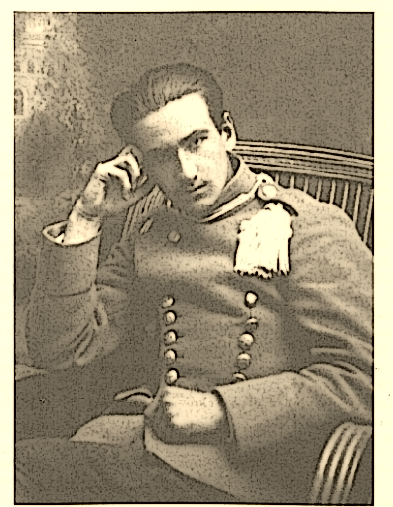 Jozef Mackiewicz, born April 1, 1902AD, was one of the most important Polish writers and publicists during the XX century, but he is rather  unknown in Poland proper.
Mostly because he was a stalwart anti-Communist and Polish Communist through education and  media, prior to 1990 AD, sought to remove Mackiewicz's writings from the popular literary and political discourse.
And in the years from the so called transition of 1989-90AD , in the court of public opinion shaped by a liberal Polish daily paper Gazeta Wyborcza and post-Communist liberal world,  his work was deemed  persona non grata, and consequently many narratives were woven about this Lithuanian Polish patriot and anti-Communist, humanist and libertarian. His writings were and still are marginalized in Poland, and it did not help that his literary works and copyrights  were, rather  strangely, awarded by courts not to his daughter Halina Mackiewicz but to a total stranger Nina Karsov-Schechter.

So this month  we celebrate the 120th anniversary of Mackiewicz's birth, he was born in Sankt Petersburg, Russian Empire, in 1902AD, since Polish-Lithuanian Commonwealth was  partitioned in 1795AD and Poles were widely spread out across Europe and Americas etc.  He is still famous for this reporting on genocide as it occurred- the Katyn Forrest Massacre, and the Ponary Massacre. But he was a prolific writer, continuing his writing all the way to his end, essays and novels, most of them on political issues of his times.

During his late teens he became a volunteer cavalryman, for  in 1919AD, during the Polish-Bolshevik war he volunteered and served, along with his brother Stanislaw and many other relatives, for the remainder of the conflict as a cavalryman under Jerzy Lupaszka Dambrowski,   one of the most  famous 'zagonczyks' (cavalry raider) of that war - nota bene there were two more famous raiders from  Kresy/ Polish Borderlands during this period:   Stanislaw Bulak-Balachowicz (the last 'Kmicic') and Feliks Jaworski. 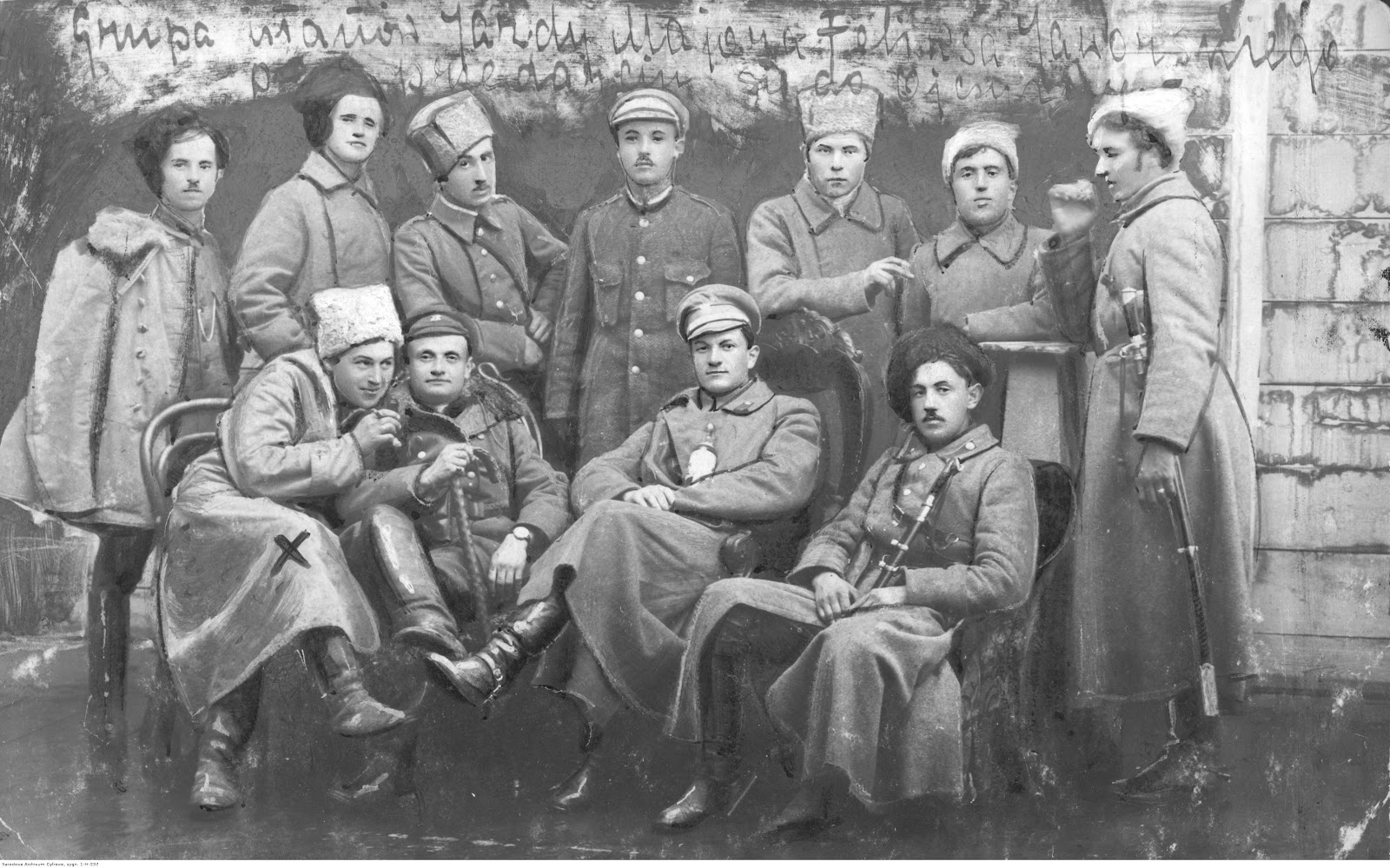 Being a soldier of Dambrowski brother s' unit, Jozef  Mackiewicz took part in the famous and legendary withdrawal/partisan raid of the Vilnius Special Command of the Polish Armed Forces, odyssey of heroic proportions that took them  from the city of Wilno (Vilnus), across Polesie and Lithuania and western Belarus to Grodno & Brest Litovsk, now in Belarus in 1919AD. He took part in the 1919 campaigning and then joined the 211th Uhlan regiment for the 1920AD campaign. 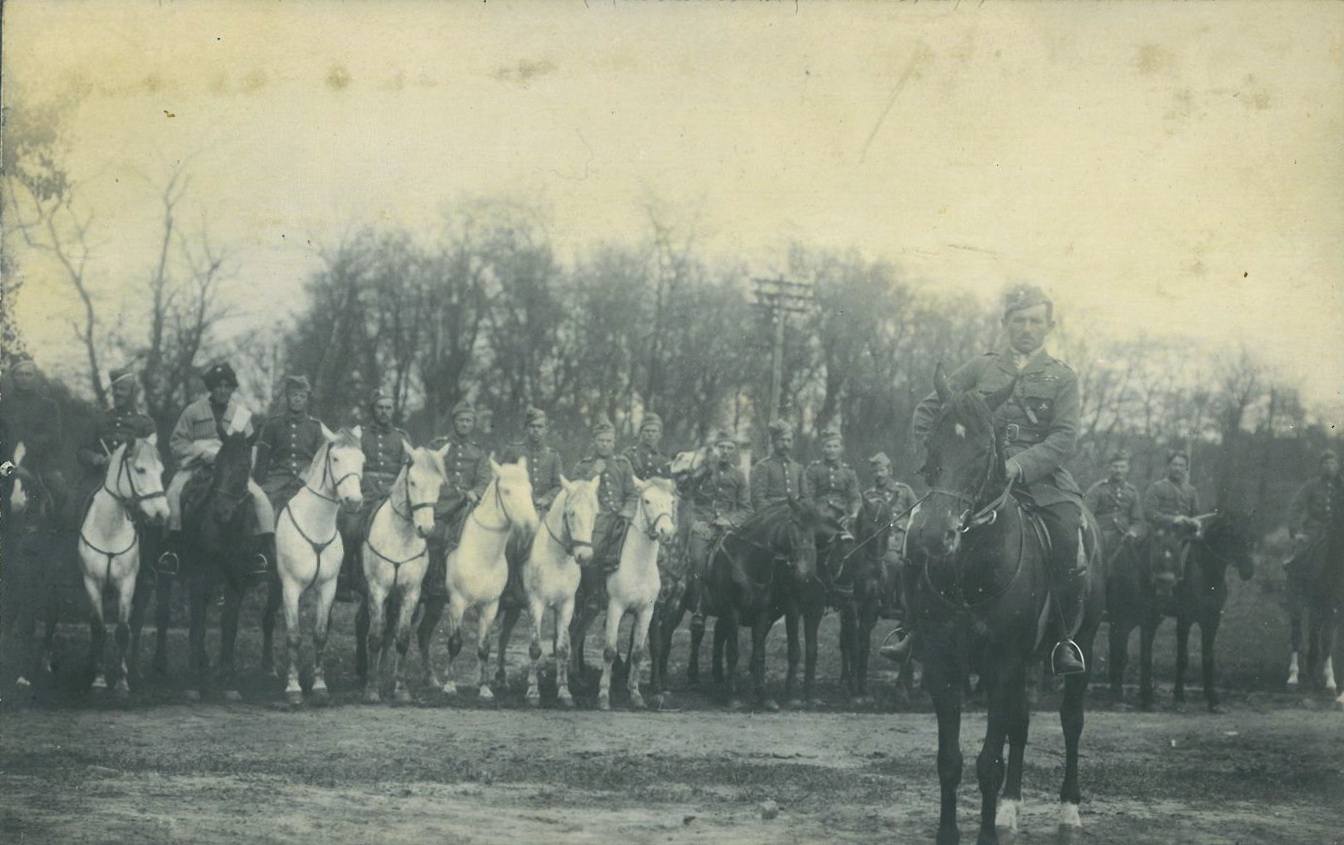 During the hot days of the summer and fall of 1920 he fought in the northern front, against the Bolshevik cavalry of Gai Khan. He wrote about his experiences in his famous and quite autobiographical novel 'Lewa Wolna' (Free Left, 1965 ). In one of his novels he described the odyssey and tragedy of the Pontic Cossack hosts that threw their lot with Nazi Germany, crossed from the Volga-Don steppes into southern Europe as part of the multi-ethnic force supporting Hitler's Wehrmacht, then in 1945 surrendered to the British in Italy and were betrayed into the Stalin's hands by the British gentlemen and officers who had given their word to do otherwise. Nota bene Polish general Anders got  the Allies to exclude the SS Galizien Division Ukrainians accepted as Polish citizens and most of them were able to emigrate to Canada and UK after the war during the 1947-8 or so. 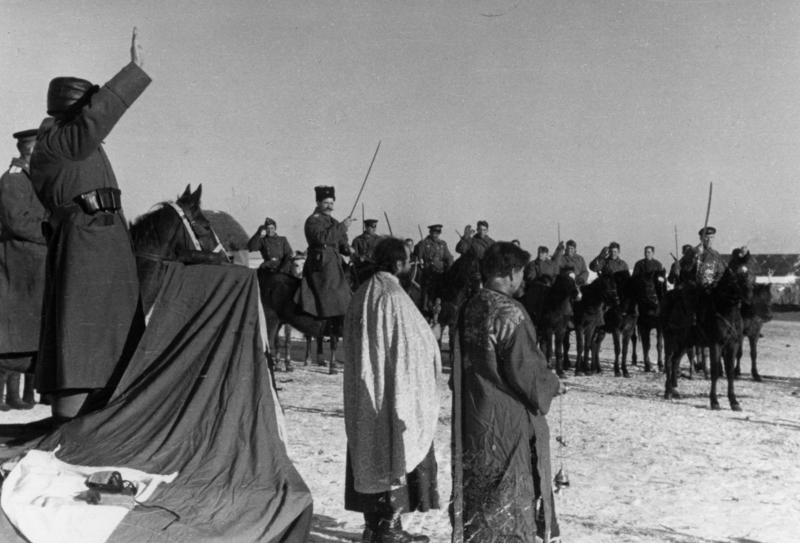 Ad rem, Mackiewicz, along with some uhlans from 211th uhlan regiment still under Dambrowski,  was taken prisoner by the Lithuanians during the October 1920AD - he was released from his captivity due to the intervention of his uncle, who was in the Lithuanian army at that time.
He was released from the army and eventually became a writer  living in Wilno (Vilnius, then in Polish 2nd Republic) after the 1919-22 war, worked for his brother Stanislaw's newspaper, survived the Soviet and German occupation, left Wilno for Warsaw n 1944, and then in 1945AD  made over to the American zone and lived for the remainder of this years in  Germany.

He wrote a lot, and among his writings and statements he coined this phrase-  only the truth is interesting.

War in Ukraine must end - pray for peace.

a bit of hiatus -  so to start the day: Józef  Chełmoński's brushes at work - :)

one of the most famous painting in the history of the XIX century Polish art is the huge canvass by Józef  Chełmoński titled 'Four-in-hand.'

Maestro Józef  Chełmoński painted this canvass in 1881, while he was residing in Paris, then  the capital of fine arts of Europe et al.