Salve,
Wikimedia Commons has this fantastic print from the studio of  Jakob von Sandrart who was one of the best engravers in Nuremberg.
The print is dated to 1664 and shows count Adam Batthyany or Adamus de Betania, Hungarian magnate and one of the chief defenders of Holy Roman Empire's border with the Ottoman Empire during the 1640s and 1650s - of the so called Capitancy of Kaniza.

He was appointed the capital-general in 1640 and his military duties included the security of the entire area south of Lake Balaton.

This Hapsburg Empire border region, de jure secure under the 20 year extension of the treaty of Zsitvatorok of 1606,  was in constant chaos and threat of small scale raiding by the enterprising commanders leading small Turkish forces while both sides pretended there was peace observed, i.e., no large scale war; hence in this state of no-official-war the Turkish commanders exploited Hapsburg inability to conduct war on two fronts (Thirty Years' War)on their side of the border conducted raids across the border into Royal Hungary for plunder, slaves, cattle and glory.

Count Adam must have achieved his goals with enough success since he was called 'a pillar of Fatherland, ' name coined by his friend and Hungarian poet Miklos Zrinyi (Zrinski). He was to have a very large retinue and being the last Batthyany to hold such vast estates in Royal Hungary, had some 1000 courtiers et al., amongst them he hosted young noblemen from Austria, Transylvania,  Croatia and Poland.
On the subject of Croats he was keen to resettle Croatian mercenaries with their families in Royal Hungary, Croats being experienced warriors and Catholics. He was known for using hussars in his border wars with the Ottomans.
On 15 March 1659 count Batthyány died in Güssing, but it is known that during the battle of Székesfehérvár (1654) when his troops defeated the pasha of Kaniza he had suffered a stroke and yet in 1657 he had been leading the troops, along with  Franz III  Nádasdy , against another Turkish incursion into his Royal Hungary..
But enough about count Adam, let us turn to the engraving itself, done about
5 years after count Adam's death.

He is shown here as a war leader and winged hussar commander mounted on a spirited stallion, holding a mace as a sign of captaincy, command and war prowess. 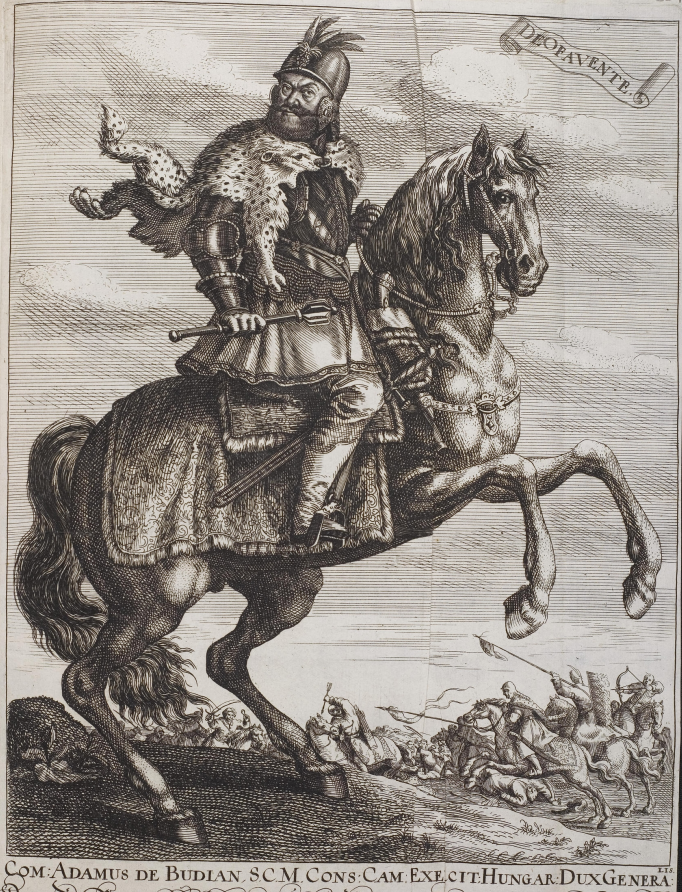 He is protected with a splendid,  apparently gilded, half-armour but instead of wearing thigh & hip plate ( Faulds & Cuisses ) protection he has a coat-of-mail under his cuirass, not unlike the winged hussar on the Tablica Gołuchowska and Stockholm Rolka paintings.  Around his shoulders, covering parts of his armour he is wearing a wild cat pelt, lynx or leopard, although perhaps this pelt looks more like a lynx one with a short tail? 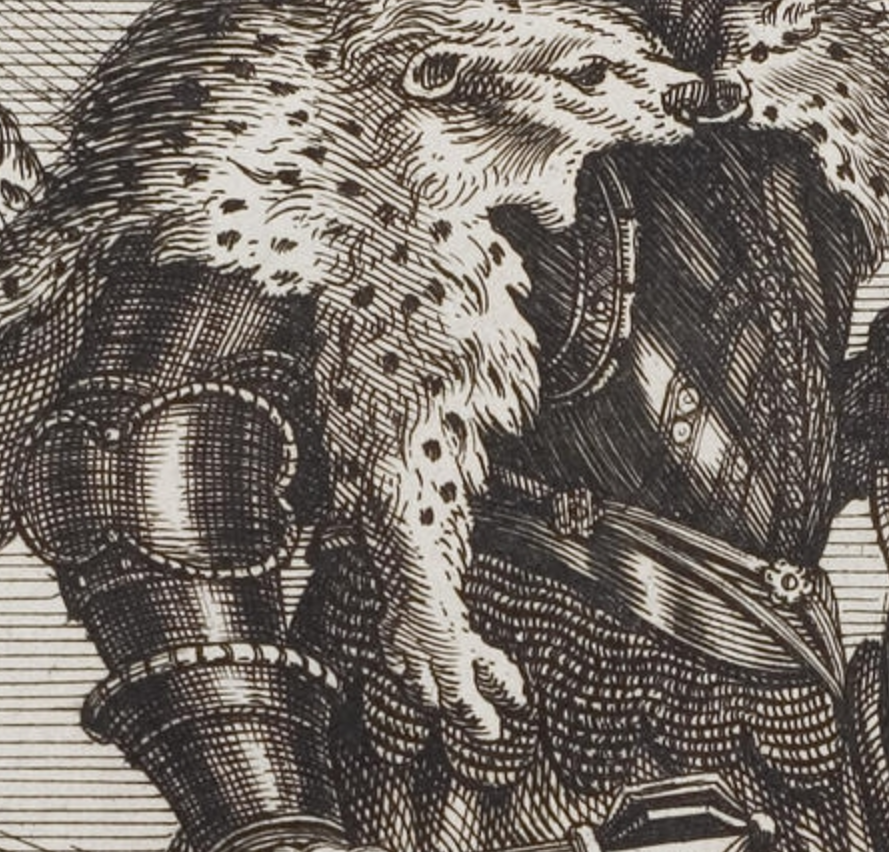 A typical hussar shishak helmet covers his head, with a splendid 'egreta' of precious stones and feathers, perhaps a mix of egret featehs with   falcon or hawk feathers. 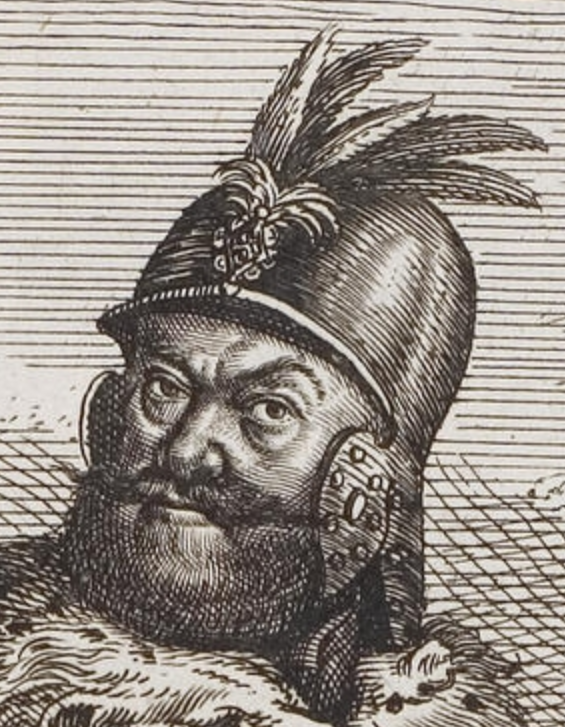 Under his right thigh there is a broadsword, typical arrangement for these shorter weapons, whereas longer 'estocks' were usually carried on the left side. He is wearing a 'dolman' underneath his armour, or at least should have worn one, as it was Hungarian fashion of almost 2 centuries, and would persist well into XIX century. His boots are typical Hungarian of the period, most likely of Moroccan leather. 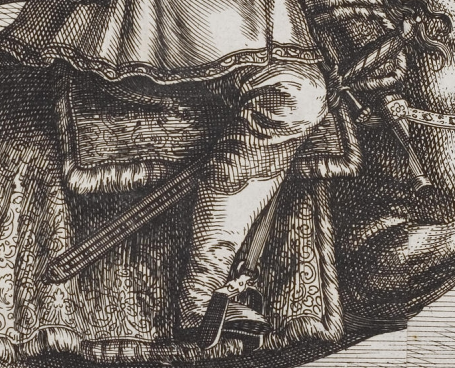 We are offered a closer look at count Adam's horse bridle, with a typical curb-bit with long shanks, while our hero is riding with one hand holding the reins in a military style, not unlike the style the California vaqueros were using some 100 years ago. We see just the lower skirts of his saddle, and perhaps it is a Ottoman Turkish-Hungarian blend, with high pommel and wide cantle.

While this imaginary portrait is splendid in itself,  the background images  shows one spectacular scene, namely they show winged hussars attacking their foe.

We have the entire retinue - the noble towarzysz hussar and his retainer. Behind them there is a mounted archer and another winged hussar charging the pillaging Turkish soldiers.

Both soldiers wield lances, but only the retainer has a wing attached to his back, while the towarzysz is wearing armour and is covered with wild cat, leopard (?) , pelt.
Again, the winged retainer with a wing not unlike the Tatars at the battle of Warszawa 1656, except this Royal Hungarian has a long lance aka kopia (Lat. 'copia')

The wings are also little similar to the wings from Certmen Equestre and wings drawn by Dollabella in his prints showing entry of Polish ambassador  Jerzy Ossoliński entry into Rome.