Salve,
I have been adding more figures to my sketches and drawings, slowly but surely the body of work will  grow... below some sample sketches.

By the way - some very intesresting articles by prof. Sergey A. Yatsenko on the Central Asian costumes during the ancient and 'early medieval' periods, especially the Tokwar/Yuezhi one is interesting to me as it covers this very interesting discovery in ancient Mongolia and her inhabitants:

Foreigners and inhabitants of Samarkand - Afrasiab

I have been asked about the riding outfit of the Achaemenid Great King Cyrus the Great , hence I decided to do a little entry on the so called Median Cloak - kandys or kantuš, that essentially it was a riding coat of the Persians and ... the Eurasian steppe horsemen. 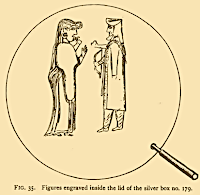 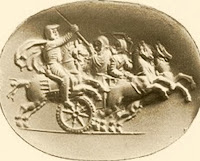 But first about Cyrus or rather his tomb, for it is a list of garments and weapons found there when Alexander entered the tomb, some 200 years after Cyrus' death (Persian clothing in general ), according to the Arrian's depiction of the Cyrus tomb (Anabasis, 6.29.6) - which in my opinion is the closest depiction on the Great King riding costume (via one of the best books on the reconstructed Achaemenid Persian army by prof. Sekunda and illustrator Simon Chew) : 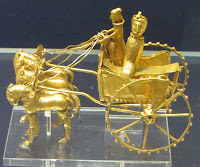 there we have: a kandys (Median cloak), tunics of Babylonian workmanship and some other tunics,  Median anaxyrides (pants); colors of these garments - hyacinth(dark blue) and purple, and perhaps yellow (from saffron); neck torques (gold), akinaka (short swords), earrings of gold. Therefore, I daresay he would not wear the Elamite/Persian robe when mounted. On his head he would wear a form of a Persian hood (tiara or kyrbasia)  or  kitaris,  perhaps bound with a blue diadem with a white decoration (from Curtius' description in Historiae Alexandri Magni)
Kandyses from Persepolis

Sergey Yatsenko, in his work  ''Costume of the Ancient Eurasia (the Iranian-Speaking Peoples)''  Moscow 2006, writes that kandys was a long garment with sleeves longer than one's arms (sleeves like the Hungarian hussar jacket), that it had a turn down collar, and it had a pair or ribbons or strings at the neck/collar to tie it up on one's chest or shoulders. Sleeves of the Persians seemed to have been narrow whereas the sleeves of the Saka/Scythian kandys/riding coat were wide (vide UkokPlateau)

Furthermore dr Yatsenko writes that kandys was an ancient Indo-Iranian garment, and the ancestors of the Persians already had a special, thicker, parade-like fur coat. Persian riding coat seemed to have been a thinner one, a cloak with sleeves. But is was a garment worn by the Persian kings and warriors/nobility at hunt and at war (as described by Xenophon ).

Polish scholar of garments and costumes, Maria Gutkowska-Rychlewska, ventures to say (page 44-5), in her book the ''History of Costumes  '' Ossolineum  1968, that kandys, shown on the silver figurine (below in a line drawing), looks as if it was sewn from leather or even tanned skins, with the fur inside the garment. She adds that the garment was always shown with long narrow sleeves, and in some heavier kandyses, eg from Oxus treasure, they had the entire front lapels decorated with fur, while around the neck there was a hood or a collar. They wore kandys hanging it off the shoulders, with ribbons or strings tied in front, holding it on one's trunk. Light purple kandys might have been the particular king's coat. 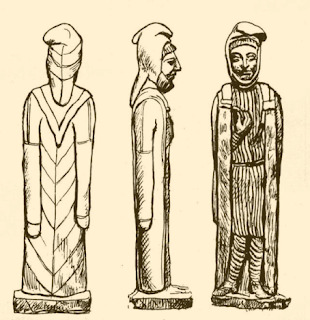 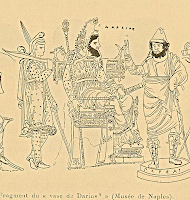 Famous satrap Datames who is thought to have reformed the Persian army in IV BC century. 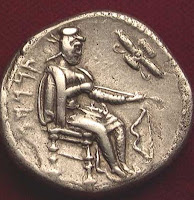 So called Alexander Sarcophagus of Sidon:
.. 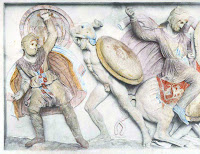 Kandys is visible in the Partian art eg coins of various Parthian kings, we know from the description of Carrhae battle that  the eventually victorious Parthians and Sarmatians fighting for Rustam Suren that they had coats (perhaps leather ones) to cover their armor. 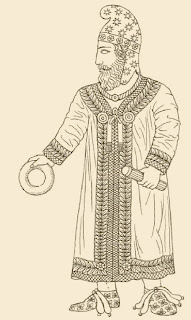 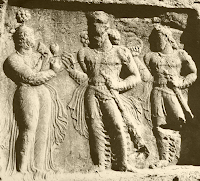 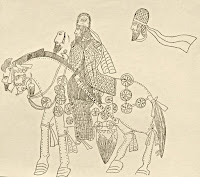 some primary sources (websites in the links) for the Achaemenid era:


Xenophon's Cyropaedia
[1.3.2] [...]Cyrus had recognized in Astyages his mother's father, being naturally an affectionate boy he at once kissed him, just as a person who had long lived with another and long loved him would do. Then he noticed that his grandfather was adorned with pencillings beneath his eyes, with rouge rubbed on his face, and with a wig of false hair--the common Median fashion. For all this is Median, and so are their purple tunics, and their mantles, the necklaces about their necks, and the bracelets on their wrists,
[8.1.40] We think, furthermore, that we have observed in Cyrus that he held the opinion that a ruler ought to excel his subjects not only in point of being actually better than they, but that he ought also to cast a sort of spell upon them. At any rate, he chose to wear the Median dress himself and persuaded his associates also to adopt it; for he thought that if any one had any personal defect, that dress would help to conceal it, and that it made the wearer look very tall and very handsome.
[8.3.13] Next after these Cyrus himself upon a chariot appeared in the gates wearing his tiara upright, a purple tunic shot with white (no one but the king may wear such a one), trousers of scarlet dye about his legs, and a mantle all of purple. He had also a fillet about his tiara, and his kinsmen also had the same mark of distinction, and they retain it even now.
[8.3.14] His hands he kept outside his sleeves.1 With him rode a charioteer, who was tall, but neither in reality nor in appearance so tall as he; at all events, Cyrus looked much taller.
[8.3.10] And all the cavalry-men had alighted and stood there beside their horses, and they all had their hands thrust through the sleeves of their doublets, just as they do even to this day when the king sees them. The Persians stood on the right side of the street, the others, the allies, on the left, and the chariots were arranged in the same way, half on either side.
Xenophon's Anabasis
[8] But it seemed to him that they took their time with the work; accordingly, as if in anger, he directed the Persian nobles who accompanied him to take a hand in hurrying on the wagons. And then one might have beheld a sample of good discipline: they each threw off their purple cloaks where they chanced to be standing, and rushed, as a man would run to win a victory, down a most exceedingly steep hill, wearing their costly tunics and coloured trousers, some of them, indeed, with necklaces around their necks and bracelets on their arms; and leaping at once, with all this finery, into the mud, they lifted the wagons high and dry and brought them out more quickly than one would have thought possible.
Plutarch's Artaxerxes
V. Again, when he was hunting once and Teribazus pointed out that the king's coat was rent, he asked him what was to be done. And when Teribazus replied, "Put on another for thyself, but give this one to me," the king did so, saying, "I give this to thee, Teribazus, but I forbid thee to wear it." Teribazus gave no heed to this command (being not a bad man, but rather light-headed and witless), and at once put on the king's coat, and decked himself with golden necklaces and women's ornaments of royal splendour. Everybody was indignant at this (for it was a forbidden thing); but the king merely laughed, and said: "I permit thee to wear the trinkets as a woman, and the robe as a madman.''

Some examples from the early modern era, they give a feel of how these riding coats hung on or off the shoulders:
Polish- Hungarian noblemen in their beautiful garments, 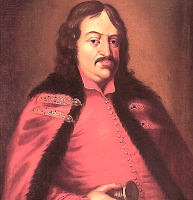 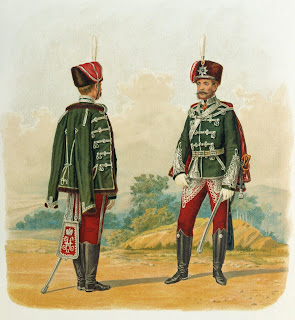 *Images from Wikipedia Commons, Archive.org, Gallica and other digital sources, and my little sketch of a Roman riding coat from Egypt.
Posted by Dario T. W. at Sunday, July 28, 2013 No comments: 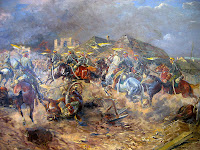 Salve,
continuing with the Sassanian rock carvings and their portrayal in various media,   I will turn to the drawings of  Jean-Baptiste Eugène Napoléon Flandin, who together with architect Pascal Coste trekked across Persia during 1839-41  drawing and sketching and painting along the perilous journey.
These are some  of the fantastic archaeological drawings published in multi-volume edition (one volume of the text and 5 volumes of plates) titled ''Voyage en Perse'' in France in 1851.

The drawings and engraving that were made after the drawings to have been reproduced in the books are precise, archival quality, a swan song of such drawings, soon to be replaced by the photography
... 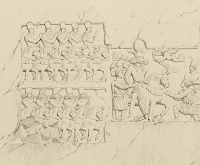 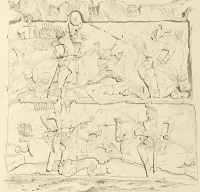 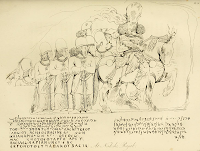 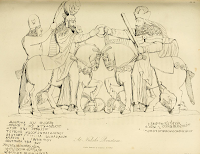 ..
On Livius.org  you can quietly pass the time exploring the Sassanian rock carvings, as the kindly scholar Jona Lendering organized them according the Sassanian kings' chronology.
Do enjoy
Posted by Dario T. W. at Tuesday, July 02, 2013 No comments: