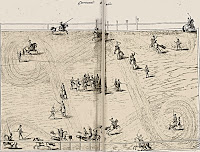 Salve,
I have been perusing the google books search for the XIX century and earlier books and voila! old book on the art of horsemanship is available for reading and download (at least in US & Canada).
The author of this XVIII century 'hornbook' for riders is Monsieur Gaspar de Saunier (1663-1748), one of the many master of equitation that France produced during XVI-XX centuries. He was a soldiers, horse stud manager, master horseman (ecuyer) and a gentleman - having to defend his honor in a duel killing the opponent, emigrant in Netherlands, and horse school master .
His book -  L'Art de la cavalerie was not translated into English, hence he is not as popular as François Robichon de La Guérinière, le petit ecuyer of l'ecole de Tuileries (the 1st or le grand ecuyer of France was prince Charles de Lorraine, comte d’Armagnac), whose fabulous book 'École de cavalerie' was  beautifully illustrated by French court painter Parrocel. Both authors' works became some of the  most important 'ecole de manege' treatises until mid XIX century when another Frenchman's book appeared.
There are some English sites that talk a bit about de Saunier eg voltes quotes of de Saunier  this is very interesting site of Thomas Ritter, a quote from the site ''His seat closely resembles De La Guérinière's. He was familiar with the shoulder-in, the invention of which is usually attributed to De La Guérinière or to his teacher, M. de Vendeuil, who had the same teachers as Gaspard de Saunier'')
a blog by mr Ritter ,
Some engravings from his book(I am not sure who the artist was, but the top image shows that while already in XVIII century the French riding masters did not abandon a lance when training in the manege), and I must add that I myself appreciate them a lot, since I have been training myself and a barn-sour mare for last 4 weeks, from the ground work up to the hackamore and sitrrupless riding, and these images of riders show some hearty and telling suggestions.

1.here we have two images of cavesson (kawecan in Polish) amongst tje samples of various parts of snaffle, curbbit etc

2.here we have curbbits, a bridle with reins and manner of holding them, a whip (in old good steppe fashion) etc 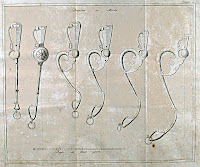 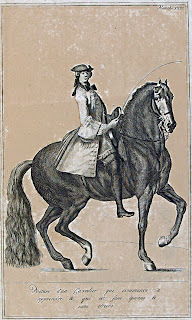 6. the last description states - A posture of a cavalier who begins his learning and who is without spurs and stirrups.
Here are some French cavalry images of the period: