Salve,
I  have several more Achaemenid Persian horsemen to show, so bear with me :) pretty please... 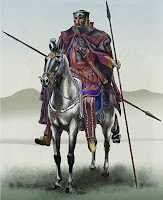 This one may be a later Achaemenid horseman - influenced by the Alexander Mosaic weygaert/alexandermosaic , thus no bow and arrows in a ''gorytos,'' but just a sword and two javelins called ''palta'' (wooden shaft  of cornel wood).
In the fashion of his Median ancestors he wears a kantuš over his ''thorax'' armor, that is a mix of Greek and north Iranian (steppe influence), and a scaled neck-guard eg Achaemenid throat guard .
Perhaps he would carry a shield (''pelta'') in a Saka/Scythian fashion, with or without a metal ''umbo.''
In order to dress himself up and become even more armored he would need to acquire armored  'leggings' and perhaps arms' leather tubular  sleeve-like protection (''cheir''), while his horse could have to acquire a chanfron (metal head armor aka ''prometopidia'') and chest armor - scale or leather peytral (''prosternidia''). It is possible that he also carried a mace or war ax (klevetz) known as ''sagaris'' popular with the nomadic subjects and mercenaries of the Great King. Here is Xenophon on the subject - dariocaballeros.blogspot. xenophon-peri-hippikes-arms-and-armor
Professor Tuplin in '' All the King's Horse '' presents in a very challenging article the idea of apparent poverty of cavalry in the Achaemenid Persian iconography. and where he discusses the Persian cavalry or rather its absence in the archaeological and iconographic materials drawn from the Achaemenid empire territories - eg the researcher states that in the monumental and public iconography of the Achaemenids there is no mounted rider, there are no cavalrymen overtly shown, nor there is a horse as a weapon of war in cavalry context (eg official seals out of 77 images in Persepolis treasury tablets have only three equines ). The Great King is a spearman or archer, but a pedestrian one when fighting or at times using a chariot to strike the foe.  This is such a undeniably a very great change from the New Assyrian kingdom ( to which ancient Media and Persia were heirs) iconography and documents where riders mounted on horses in context of war dominate. More on this research paper by professor  Tuplin in the future...
ps
Jan, thanks for you comments :) ,  asked a question about the helmet here - well, it is a conversion of this helmet:

If you don't mind me asking - what is the helmet based on?

Salve Jan,
I added a drawing which will explain the helmet, I hope
Thank you for your comments and supports :)

O_O I've never seen that one before!

is that a Persian piece then?

A very atypical shape I'd say. Interesting how the cheekguards remind me of a chacidian officer helmet. (the image of a ram's head) Even the "brows" are similar.

Would you say it's a Persian imitation of a Greek design?

I think the helmet is described as Scythian/Saka (was found at the Poseidon Sanctuary on the Corinthian Isthmus), and you are right, it is very unusual - it is was proposed to me by mr Marek Wozniak. The image of a ram on the cheekpieces is well within the Iranian mythology and sacred imagery. So perhaps it was made for a Saka?Persian warrior after a Greek example and modified a bit etc.

I'm a bit late to this party but I'm very keen on the source for the reconstruction of the helmet, any chance you can share? I'm a sculptor, mainly 28mm but I have done a large portion of the Xyston 15mm range, in particular the early Persians. All the best.

Hello John,
thanks for visiting my blog.
I think we can talk via email - cheers