Salvete Omnes,
the Old Year is almost done - it was not the easiest one for many, for me the biggest loss was the death of my beloved German Shepherd dog Inka.
Anyway, perusing great Archive.org I came across several articles and books on the world library site, including  famous professor M. I. Rostovtzeff Report on 1931-32 excavations at Dura-Europos (captured and destroyed  by the Sassanians in AD 256) site in Syria. - curiously the Yale publication was printed in Praha, Czechoslovakia in 1934.

I would like to remind you that one of the best images, attached above, ancient images of the armoured horseman aka clibanarius/cataphractus comes from Dura-Europos (in graffito form) - you can read about the Parthian and Sassanian armor from Dura-Europos in the article by H. Wójcikowski (University of Rzeszow magazine Anabasis 4/2013 - available via academia) or Patryk Skupniewicz, or recent publication from Siedlce University & Azad Univeristy- on the Persian helmets.

Horse graffito from Dura Europos - the entire page from the Report - great horse tack and horse conformation information in there.

also professor Simon T. James article on the siege warfare during the siege of Dura-Europos by the Sassanians ( two vplatforms - academia & archive).
Valete!

I am awaiting a book from D'Amato and Negin team on the Roman Heavy Cavalry, recommended to me by Patryk Skupniewicz. I have seen the plates already, 'published' on Facebook ( nota bene I am somewhat skeptical about the  reconstructions and horses etc), but I am quite curious about the text - I enjoyed their work, separate and joint,  in the past. None of these two authors has some serious knowledge (evident in the images and text made available) about the horses and horse tack, but they are solid on sources and excavated materials - nota bene the plates have some amazing artwork by Negin showing armour, weaponry and Roman emblems etc - now, how they have gone on interpreting them it remains to be seen until I read it.
Posted by Dario T. W. at Monday, December 31, 2018 No comments:

Salvete Omnes,
and so it was Christmas AD 2018, sadly it is gone ,  now we shall await  the New Year's coming in less than a week time.

Just I would like to share with you these three paintings by a Flemish painter Justus Sustermans, showing Ferdinando and Leopoldo de Medici  - their father the ruler of Tuscany died in 1621 AD and brave mother became the regent for oldest son, Ferdinando.


Boys are painted in a contemporary Polish costume, circa 1622.
Here you'll find the story behind the costumes in the paintings.

The horse tack is very interesting - it reminds me quite a bit of  the  Stockholm Roll winged hussars horse trappings,  while the saddle has some characteristics of the Polish winged hussar saddles, royal gifts to the Tzar,  the collection of the Imperial Moscow Armory (Oruzhennaya Palata).

Salvete Omnes,
It is Christmas today, and away from eating and merriment I have been perusing the images on the Wiki commons related to the ancient Roman art and horses.
There is a book I have not bought yet - Roman Heavy Cavalry (1): Cataphractarii & Clibanarii 1st Century BC - 5th Century AD" (Elite 225) by Raffaele D'Amato and Andrey Negin.  My friend Patryk Skupniewicz says the book is good, so I will have to add it to my collection. It has some intersting and some very new imags of Roman cavalrymen and their mounts and equipment.
Why I mention this book, well, in other books by D'Amato & Negin  there are many images, often for the first time seen outside the academic works,  of the original Roman artwork, iconography and archaeological findings as well as many reconstructed horsemen and their horse tack.

I enjoy studying these books for the images and text , and more often than not I find myself looking for the places and objects mentioned in the books, seeking if there are more images an/or texts available on Wiki.
This led me to Palestrina - the ancient Praeneste - where the spectacular monumental temple to Fortuna Primigenia, probably the largest sanctuary in Latium or even the whole Italy. 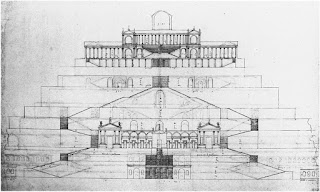 and some amazing relieves from there, showing horses and horse tack. 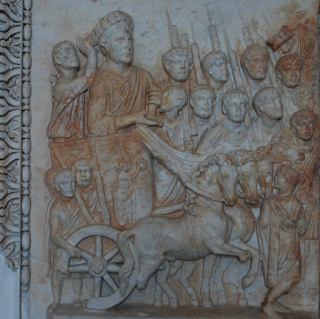 My Good Fortune always be with you all.
valete

*
Merry Christmas to you all, my friends and fellow travellers.
*

Polonia Victrix (we, Polish Americans) won the fight against Jersey City mayor and his corporate real estate developers (and some other shadowy figures)
City Council voted unanimously on Thursday - Katyn Forest Massacre Memorial is to stay.


Vivat! What a great gift to the Polonia all around the world! In spite of the actions of the current Polish goverment and its envoy in the US the New York City Consul.
Katyn Forest Massacre on Twitter [English]
Katyn Forest Massacre Monument of twitter [Polish]
Polish state radio on the subject  - po polsku. Salvete Omnes,
just doing some digital sketching - I have bought a new computer so now I will have to buy a new tablet, or a pen display, my  tablet needs a replacement for sure

[English]
today my friend Radek (Radoslaw) Sikora, Ph.D.,  announced on his Facebook page that next January 2019 his Polish publisher,  Znak, will release his new book on the winged hussars.

The book, apart from its very interesting, rich and exceptional text entirely based in primary sources and research, is profusely illustrated with period images, drawings, photos of winged husaria reenactors and historical objects related to husaria  - thses are  fine photos by Marek Kalisinski and Radek Szleszynski.
There will be 5 drawings of mine in this book, including perhaps the first ever reconstruction showing the entire winged hussar retinue from the early XVII century:   mounted winged hussar comrade, his two retainers also mounted, multiple servants both mounted and riding carts and wagons, war steeds, spare horses and draft horses,  wagons, carts, oxen and tents.

The explosive cover was done by Mariusz Kozik, well known by his Total War games artwork. My objection to this cover is that we see our winged hussar as a cuirassier with a sword (and in fact they did fight as cuirassiers at times) and not a heavy lancer with his long painted kopia (lance) who put fear in the hearts of our foes and today lance-armed winged hussar dominates our imagination.

Perhaps this new book, based in the doctoral and post-doctoral research done by the author, might get translated into English and other languages one day.
Valete
Posted by Dario T. W. at Tuesday, December 11, 2018 No comments:

Salvete Omnes,
a quick photo of a ball pen & Antique White acrylic paint drawing done in the spirit of the Old Poland horse and tack (the wire retained for the purposes of seeing the size of the artwork - 9X12 wired sketchbook)

Salvete Omnes,
some sketches, perhaps it will be mostly sketches this month -  Christmas and holiday season coming fast this month of December 2018.
so here are some ballpen digitally-manipulated sketched of horses of Old Poland


I may, time permitting, add some daily sketches

Valete!
ps
Novelist Helena Schrader wrote this very interesting article about Spartan sexuality before the Persian Wars. - I enjoyed and perhaps could suggest it as a must read  if you are into the ancient history, especially the ancient Greek state.
Posted by Dario T. W. at Friday, December 07, 2018 No comments: