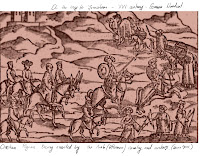 salve,
this time a German woodcut from the second half of XVI century shows a caravan - consisting of a group of Christian pilgrims, riding mules, with an escort made out of 2 Arab Ottoman sipahis and infantry Arab archers along with a mule, camel and donkey train etc.
In my humble opinion this is another very interesting iconographic material related to Ottoman empire, its ethnically diverse warriors and their equestrian traditions, as well as peaceful interactions between the Muslims and Christians, when the latter traveled on a pilgrimage to the Holy Land.
In my next post I will expand a bit on the cavalrymen and their mounts (appearing to be an Arabian horse type) in this woodcut.
Posted by Dario T. W. at Monday, February 28, 2011 No comments:

Salve,
again scouting the Net I came across this interesting later XVI century German woodcut showing 4 Ottoman horsemen escorting a very strange but triumphal procession. We have captured Hapsburg soldiers, identified by two headed black eagle on a first flag, showing to the observing, presumably, Turks their colors, weapons (one weapon looks like a long sword of the landsknechts) and finally comrades' severed  heads stuck on pikes and swords.
Head cutting is nothing new within the warrior cultures of the Eurasia, Africa, Oceania and Americas.
This particular processions resembles reported parades of cut heads and scalps on sticks and spears  within the American Indian warfare ceremonial and ritual during XVI-IX centuries.
Posted by Dario T. W. at Wednesday, February 23, 2011 1 comment: 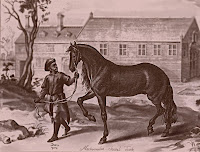 Salve,
A Turkish horse - engraving by Lucas Vostermans Jr. after Abraham Van Diepenbeeck for William Cavendish, Duke of Newcastle author of  A New Method and Invention to Dress Horses published 1657 (see here the color image of the  1659 version Mackomilia   ), English edition 1667.
I changed (by drawing over) the African groom's costume - from fancy to more Eastern looking, but not quite Turkish yet.
Author Dona Landry (  her book Noble brutes: how Eastern horses transformed English culture ) says about Mackomilia's image in this print that this 'horse displays natural impulsion and proud self-carriage' and that black groom depicted here is a 'symbol of social status' in England (page 46) and I would add whole Christian Europe of  XVII century.


Cavendish stated about a Turkish horse of his times (1650s)  that it was a tall horse, "but of unequal shape," and that though "remarkably beautiful, very active, with plenty of bone and excellent wind," ''fine animals' with ''beautiful eyes'',  it rarely had a good mouth. He advocated Eastern and Iberian horses to improve English stock.

It may be interesting to note that he was not alone for other early modern English writers, when advocating stallions,  proposed use of Arab, Barb and Turkish stallions to improve English horses (Markham,  Michael Barret etc) Nota bene prolific writer Markham, who wrote a book on training war horses, named those 'charging' or 'trotting' horses.
Finally in an letter dated January 22, 1690 from  one English gentleman to another we find a description of a Turkish horse:
Sir Christopher Musgrave to Rouert Harley.
''The Turkish horse is valued at 130 luidores. Ten years old, unstrained, his limbs very clean and in a fine condition. His height is fifteen hands wanting one inch.''

Some thoughts on horse and horse breeds by William Cavendish:


“.if a horse is fit to go a travelling pace, let him do it; if he is naturally inclined to make curvets, he must be put to it; and so of the demi-airs, passadoes, terre-a-terre, croupades, balotades, and caprioles. If he be not fit for any of these, put him to run the ring; if he be not cut out for that, use him as a drudge, or to go of errands. If none of these suit him, he will perhaps be good for running, hunting, or travelling, or for the portmanteau, or for the burdens, or for coach or cart; for really there is no horse but what is fit for some use or other.”

What nation produces the most beautiful horse?' To which I answered that I could not decide till I knew for what the horse was intended.... have heard Neapolitan horses commended, but these were ill-shaped, though strong and vigorous. I have seen Spanish horses, and have had them in my own possession, which were proper to be painted, or fit for a king to mount on a public occasion; for they are not so tender as the Barbs, nor so ill-shaped as the Neapolitans, but between both. Genets have a lofty, fine air, -trot and gallop well, but are seldom strong, though when well chosen they bear a good character. The best breed of horses is in Andalusia, especially that of the King of Spain's, at Cordova.
With regard to the Barbary horses, I freely confess they are my favourites, and I allow them the preference as to shape, strength, natural genteel air, and docility. I confess they have not so genteel a trot or gallop as the genets, but no horses in the world have a better movement in general, when they are well chosen and well instructed; though I have been informed in France, by an old officer of the army in Henry IV.'s time, that he had often seen a Barb beat down by the superior strength of a Flemish horse. I have experienced this difference between the bone of the leg of a Barbary horse and one from Flanders, viz., that the cavity of the bone of the former shall scarcely admit a straw, whilst you may thrust your finger in that of the latter. The generality of Barbs are sinewy, strong, swift, and good-winded. Mountain Barbs are horses of the best courage; many of them bear the marks of wounds they have received from lions.
With respect to the Northern horses, I have seen some beautiful in their kind, genteel in all sorts of paces, and which have excelled all others in leaping. Moreover, they have a peculiar excellency' in the motion of their fore-legs, which is the principal grace in the action of a horse; but they sooner come to decay than a Barb, and you will always find among them more horses fit for the cart than the manage.
The best stallion is a well-chosen Barb or a beautiful Spanish horse. Some people pretend that a Barb or genet produces too small a breed. There is no fear of having too small horses in England, since the moisture of the climate and the fatness of the land rather produce horses too large. In the choice of breeding mares, I would advise you to take either a well-shaped Spanish one, or a Neapolitan. When these are not easily obtained, then a beautiful English mare, of a good colour and well marked."

Salve,
Scouting the net and libraries I found this little woodcut done sometimes during the second half of XVI century, showing the Ottoman Spahis aka Sipahi mounted on a caparisoned steed and a priest (imam) on a mule. There are quite a few images of religious men riding mules as they were much more seemly mounts for the clergy, I suppose.

Our knight is rather dressed for outing on the caravan trail and not expressly for war - notwithstanding his bow and arrows, his noble and ancestral steppe prerogative - and he might be mounted on his parade gelding or stallion (being an owner of an estate he owned a few good gelding and stallions, fillies, colts, mules, donkeys and broodmares), bitted with a long-shanked curb-bit and a tide-down or martingale (but curiously on bridle without a noseband - an error of the printmaker?).

I daresay this splendid little beauty is a pacing horse and might be  actually doing a Turkish version of a Spanish walk.
...
Posted by Dario T. W. at Monday, February 21, 2011 No comments: 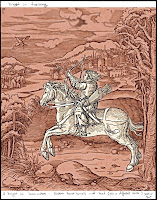 Salve,
effigies of horses in nomadic and ancient art are always wonderful to behold. My favorites are the remains of the  Eurasian steppes art from I millennium  BCE (from the steppe kurgans), artifacts belonging to the so called Animal Style, especially from the first part of that millennium when it was relatively free from Greek art  influence in the West, and influencing Chinese art in the East.

But as I am preparing some Hallstatt culture warriors on horseback  I came across this image of  iron war hammer head,  a horse head with its neck worked into a war-hammer head, and I think this artifact is simply beautiful (I have several other drawings of similar artifacts - axes and war-hammers). I decided to do a quick sketch.
ps
Could someone point me to a good book on the Iberian and  Celtiberian warriors and their horses, and the ancient horse tack in the Iberian Peninsula - Spanish or English? I have several drawings of Iberian warriors but I want to learn more, and I downloaded some articles from la revista  Gladius  http://gladius.revistas.csic.es/index.php/gladius
Posted by Dario T. W. at Friday, February 11, 2011 2 comments:

Salve,
we had some cold days and nights in Colorado - and lovely views of Pike's Peak snowed-in.
I am attaching here some sketches that I have been working on, in different stages of 'undress' :) - common theme - Polish-Lithuanian Commonwealth
hasta la vista 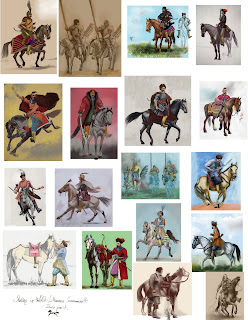