Salve,
in 1736 one of the great XVIII century  treatises on horsemanship was published  - ''Ecole de cavalerie . '' Author none other than French ecuyer Robichon de la Gueriniere and this book was illustrated with the drawings by one of the best artists of the era - Charles Parrocel.
I 'corralled'  some images from this great work so devoted to horses, riders & equitation, I hope to all enjoyment, courtesy of great Gallica :) - merci!
You may note the training for the cavaliers - not only with sword and pistol (fire arms) but also a javelin and a lance...
. 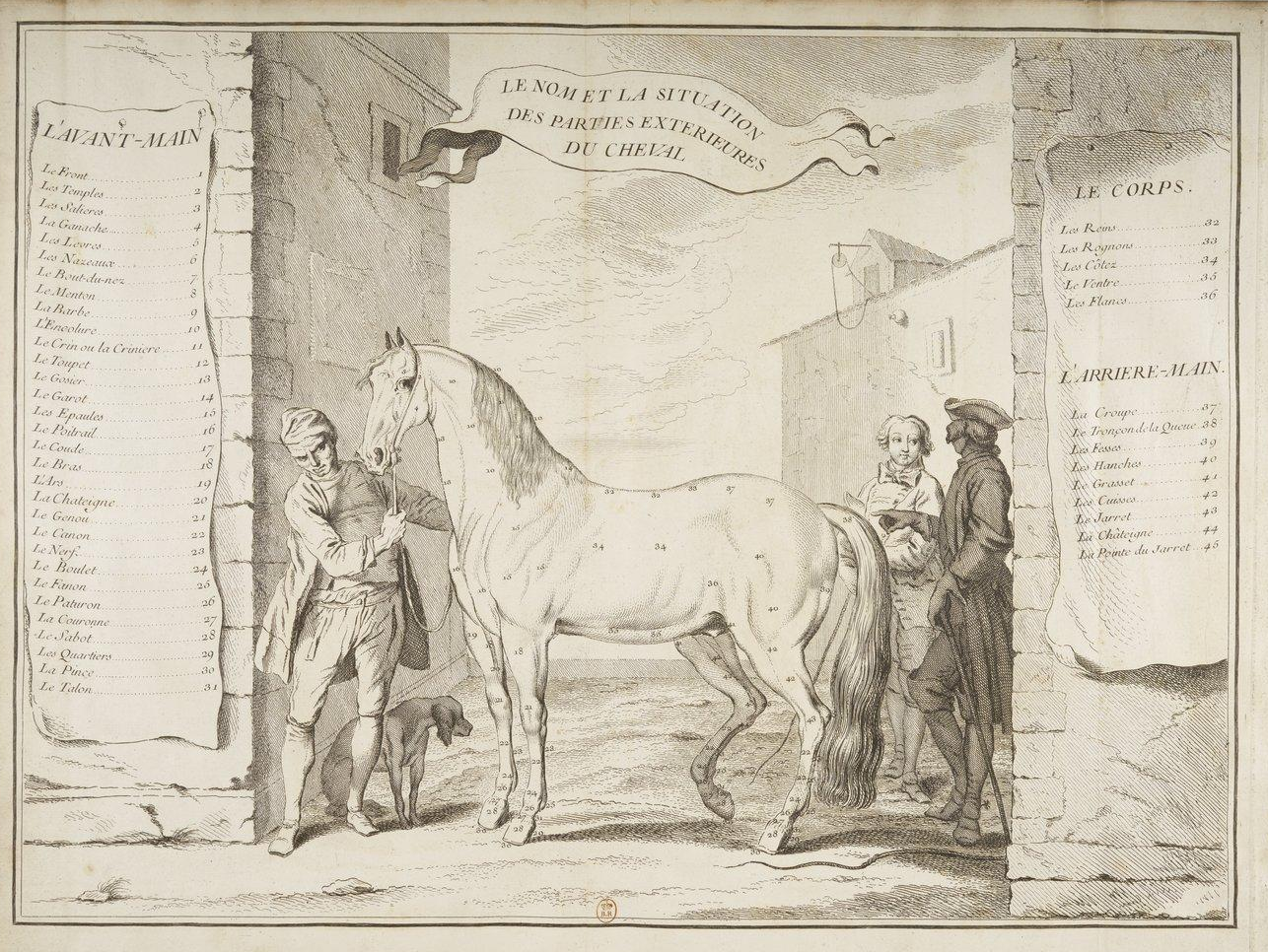 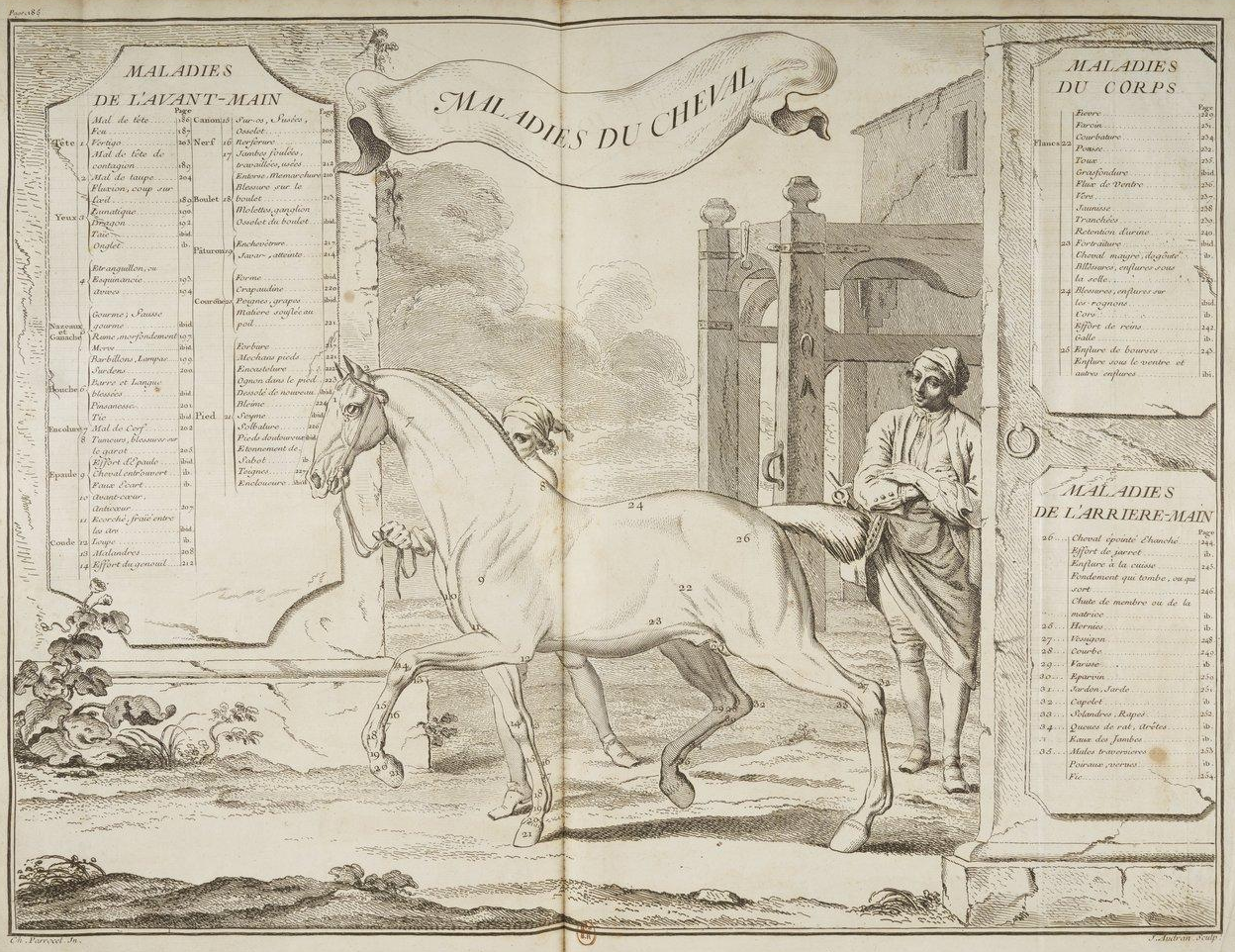 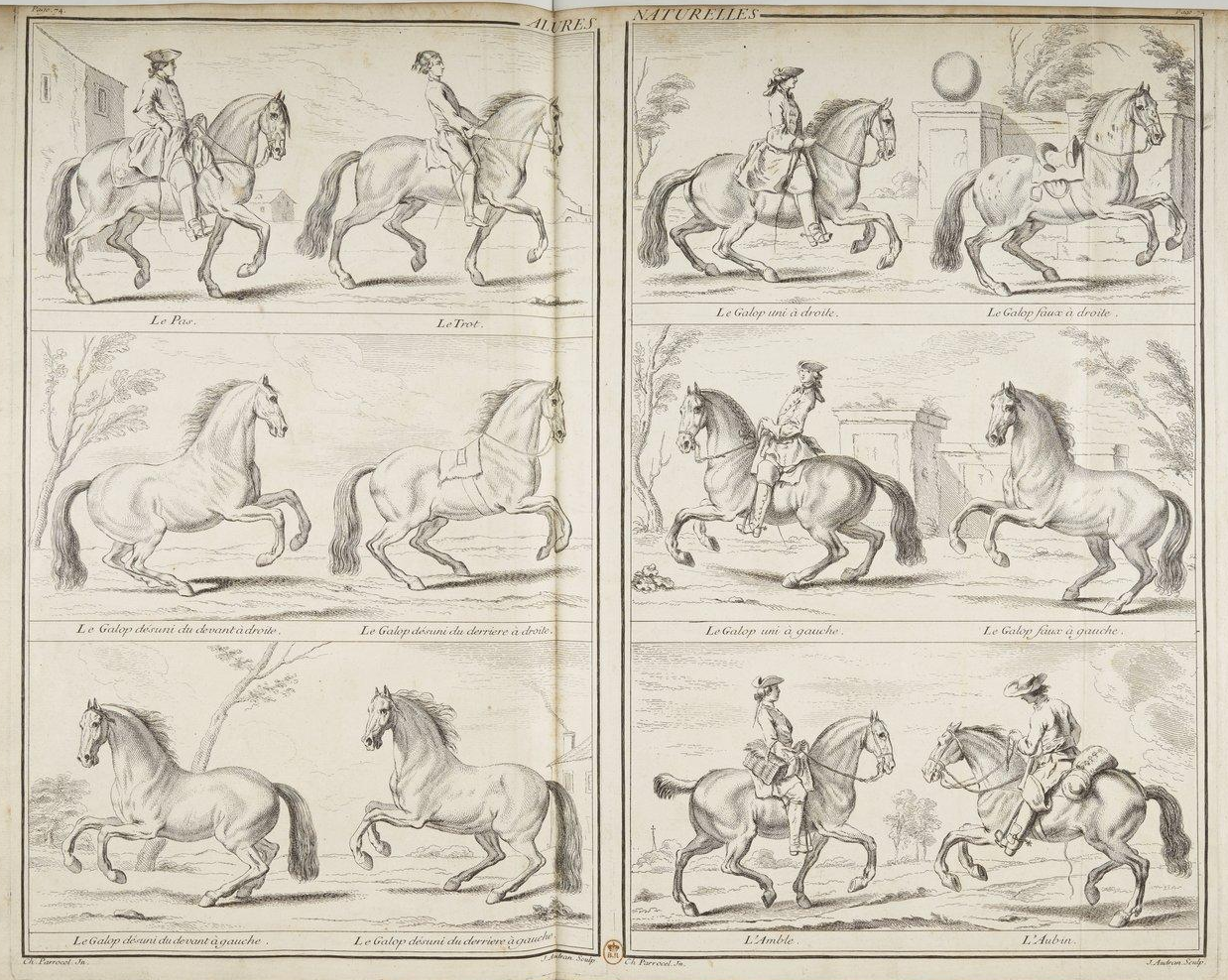 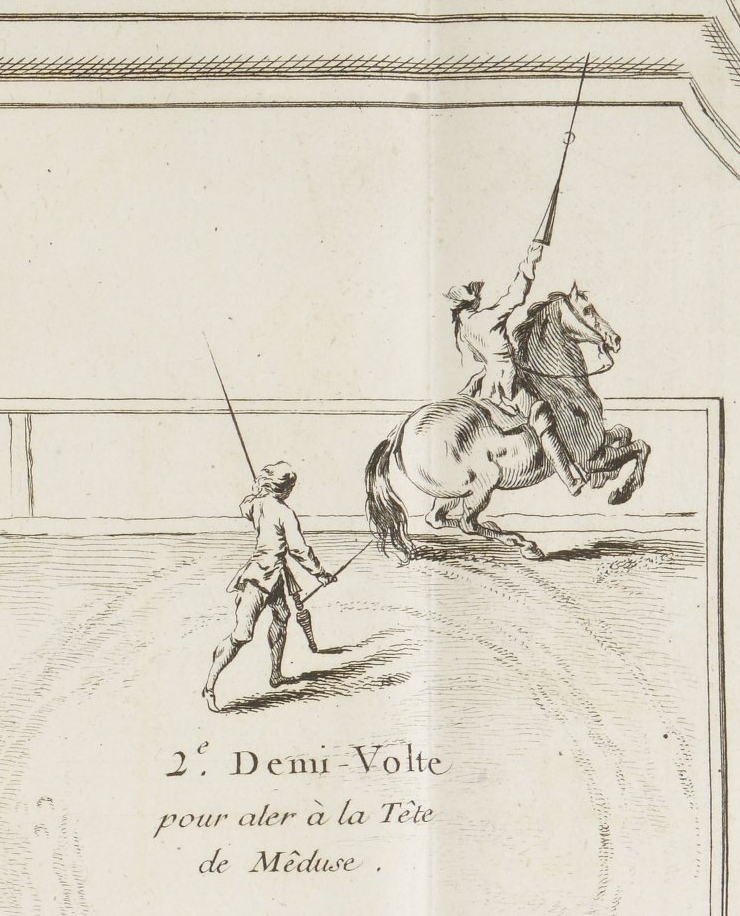 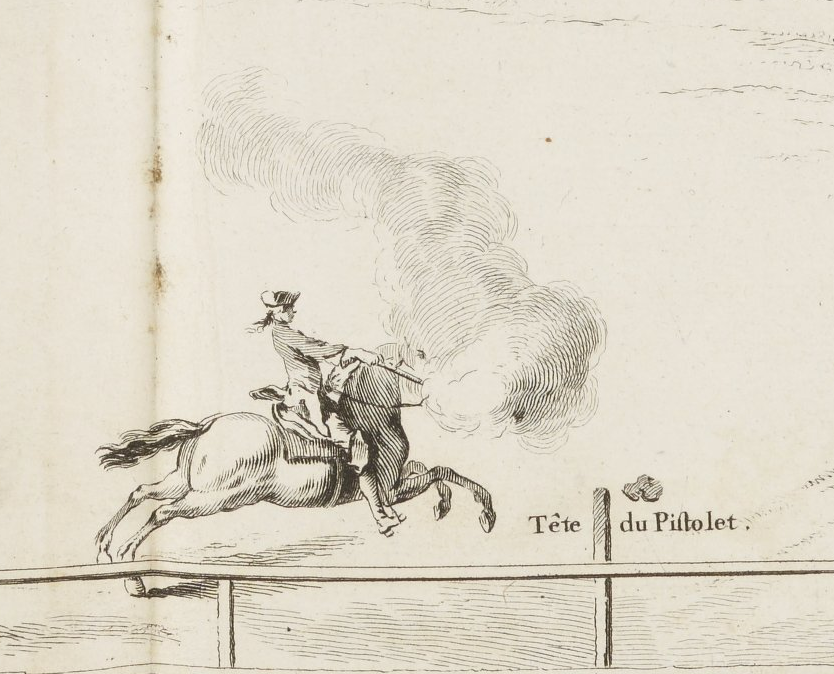 .
enjoy
ps
you can compare these with images taken from the work of Gaspar de Saunier
Posted by Dario T. W. at Monday, June 30, 2014 No comments: 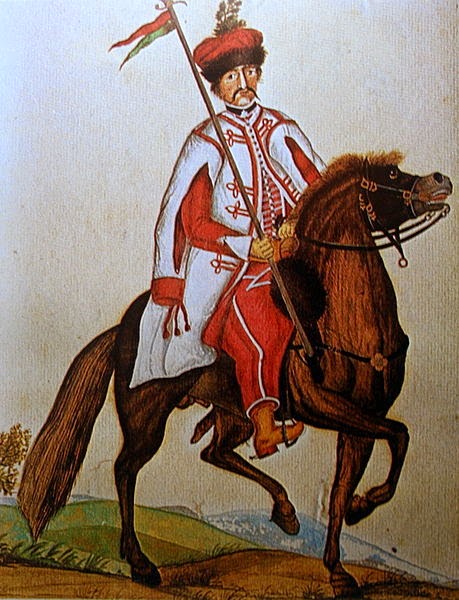 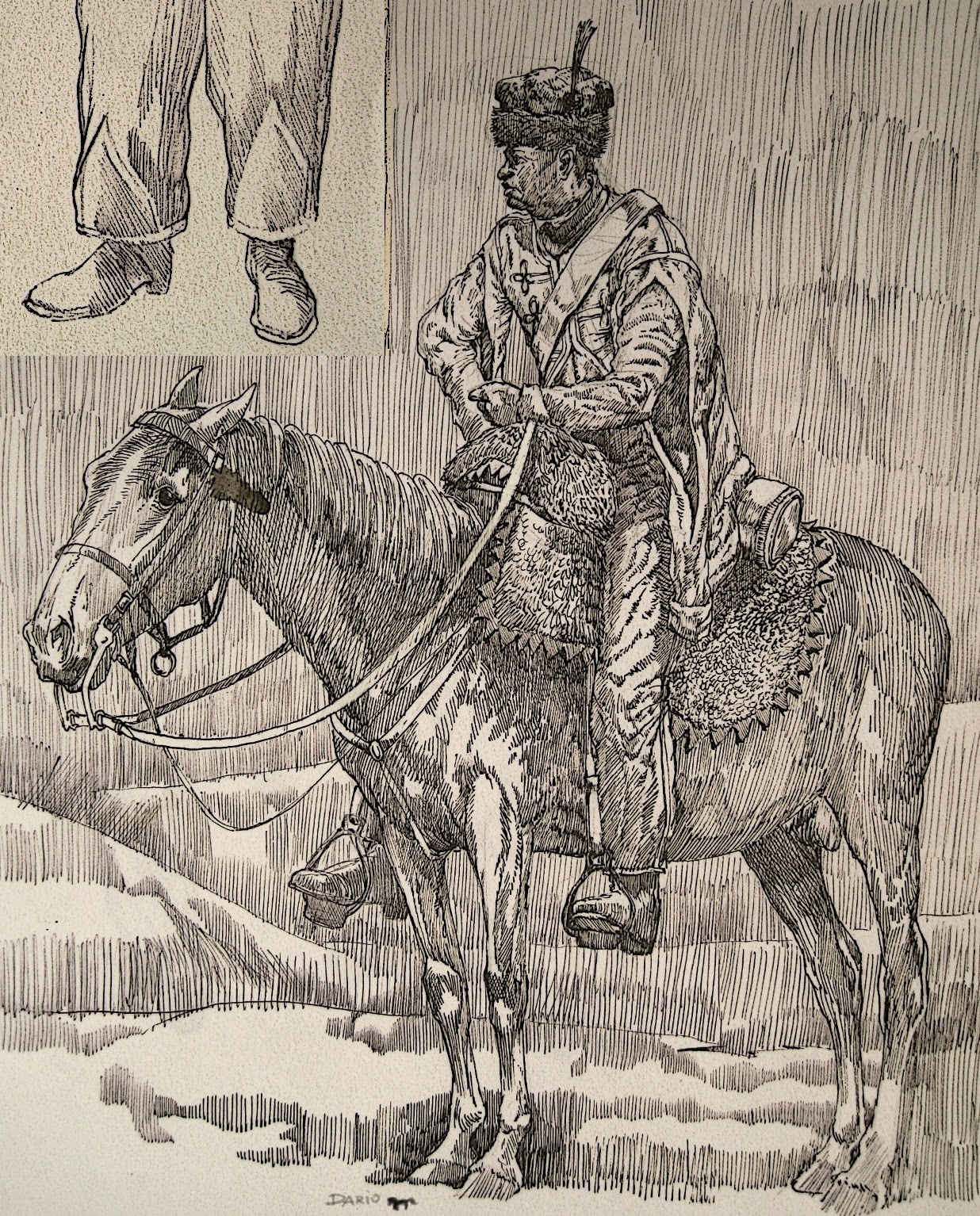 Salve,
yesterday, June 25, it passed another anniversary of the battle of Little Bighorn. I have been renewing my interest in all things American cavalry, and hence I am bringing up the subject of this famous clash on the Great Plains.

For many years I did not care about chief American protagonist of this battle, but lately for some reasons (including the reading of the book on Custer's years during the Civil War) I have been  warming up to the great horseman from Michigan. My Life on the Plains - in audio form - is helping too.
Below a photo of dashing Custer when still a captain during the Civil war (1862). 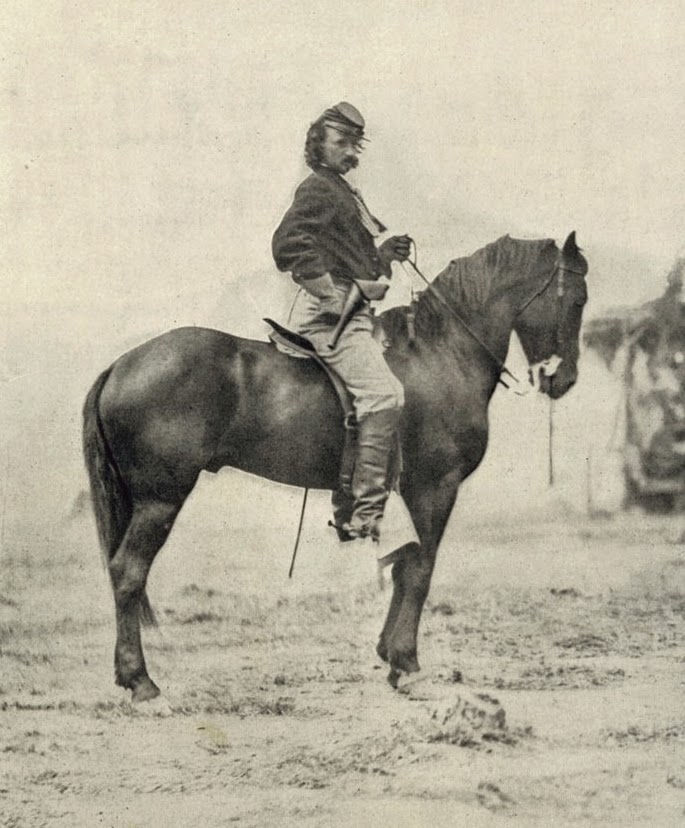 As the Lakota warrior saw the fighting in his ledger art:

On this webpage you can view some of  the ledger art drawn by one of the victorious warrior participants, Red Horse (Miniconjou Lakota), while here another victorious warrior Elk Head, Brule Lakota, tells his story of the very battle.
Custer, along with C, E, F, I, and L companies of  his 7th cavalry regiment (plus men from Major Reno and captain Benteen battalions), died fighting bravely on the Greasy Grass River (the other name for the battle). Some agree that  perhaps his victor can be identified as White Bull of the Miniconjous and author of White Bull Manuscript (nota bene the subject of one very entertaining biography written by Stanley Vestal titled ).

Short article on the battle by Charles King, another famous soldier of US Cavalry and fine writer ( this particular article wrongly attributed on archive.org) .

The battle had many famous native participants - 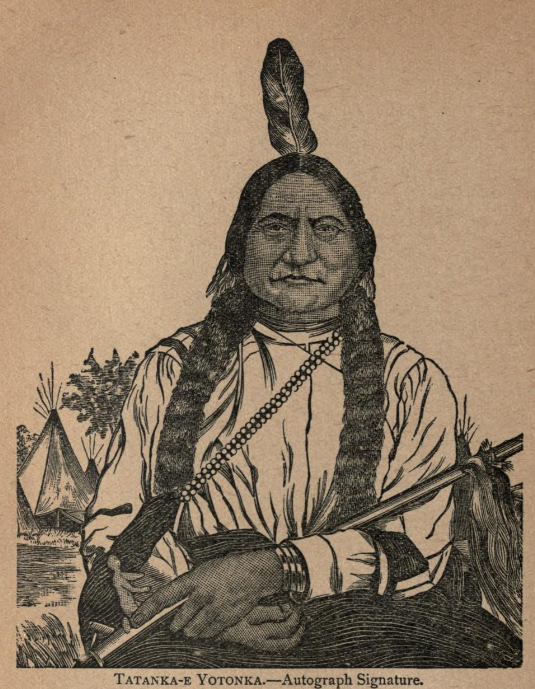 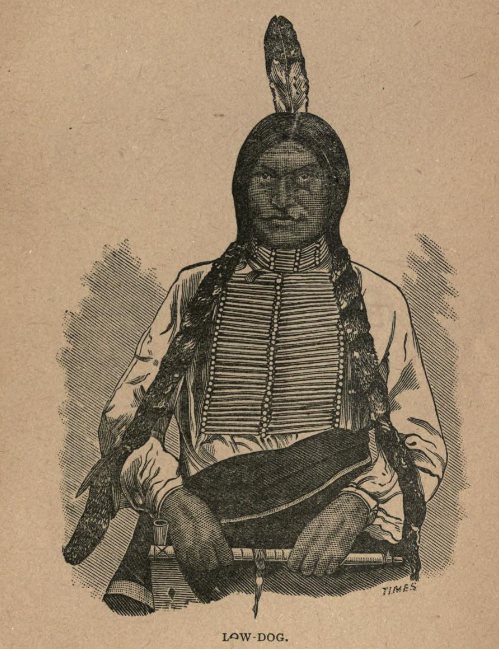 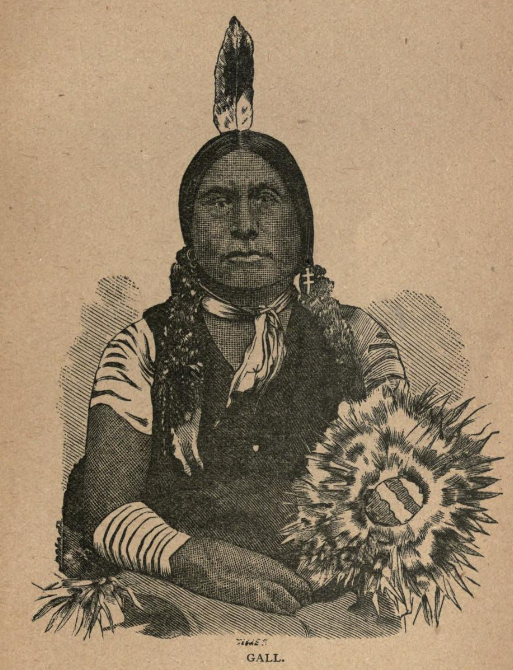 Rain in the Face 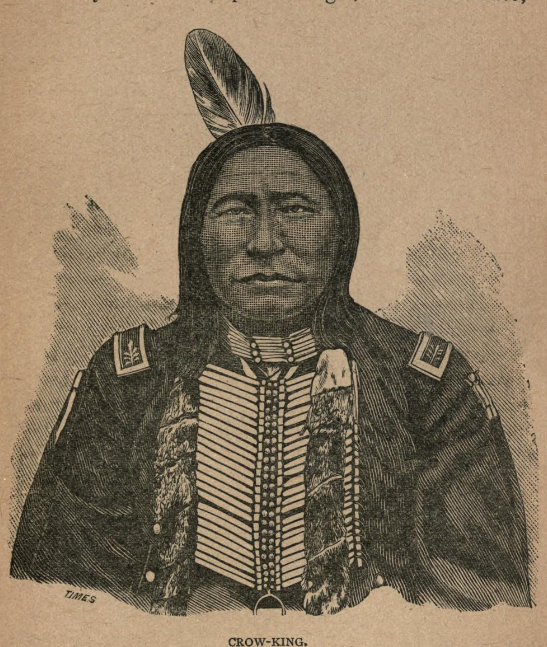 and so on, and others on the government's side, including some associated with its aftermath, like Buffalo Bill Cody.

I will hoover, from time to time in the foreseeable future, over the Great Plains and the various horse cultures that developed, coexisted and finally clashed on the wide expanses of these harsh steppes and hillsides.

Photos and art are mostly from Wiki Commons, American master Russell painted the most native participants oriented piece, in watercolor.

I could not omit the famous horse participant and the survivor of the battle, Captain Keogh's mustang Comanche 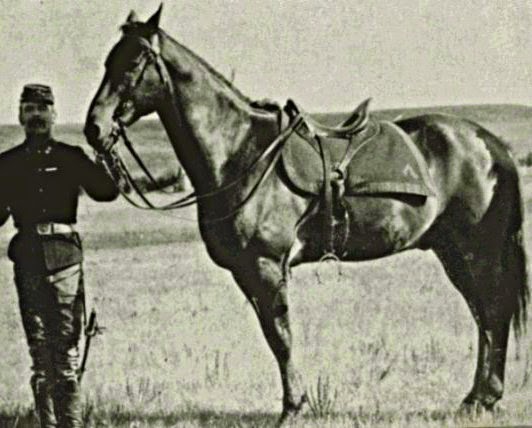 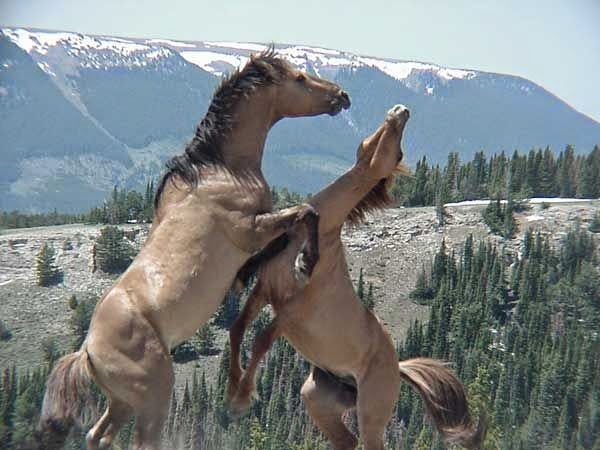 Salve,
some time ago I sketched a head of a wild horse from Sand Wash Basin in Colorado.

What can I say, I like the wild horses aka mustangs, are subscribe to the idea of their strong importance in preserving equine genetic material and also I support their existence in the wilds of the West as the living embodiment of the American West history and legend.

Yesterday I read that the wild horses in sand Wash area will be subjects of chemical sterilization due to alleged range overpopulation. 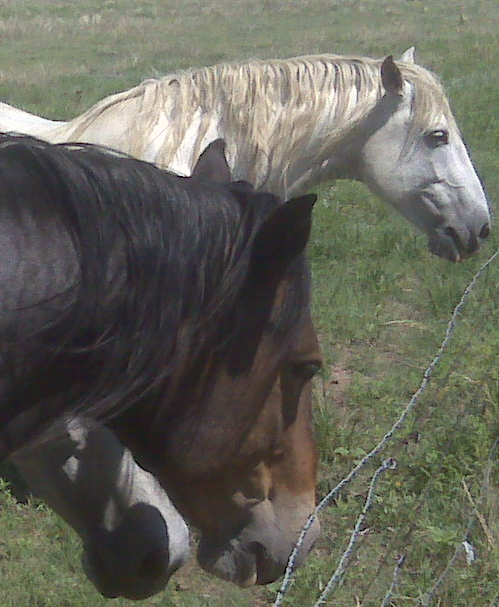 1990 BLM document , national Academy of Science (US) 2013 report, finding & proposal    By the way I found this article on actual wild horses sterilization from the Danube Delta in Romania, Europe. The Danube River Delta horse as per  Four Paws and Equinest, some photos,   some updates etc 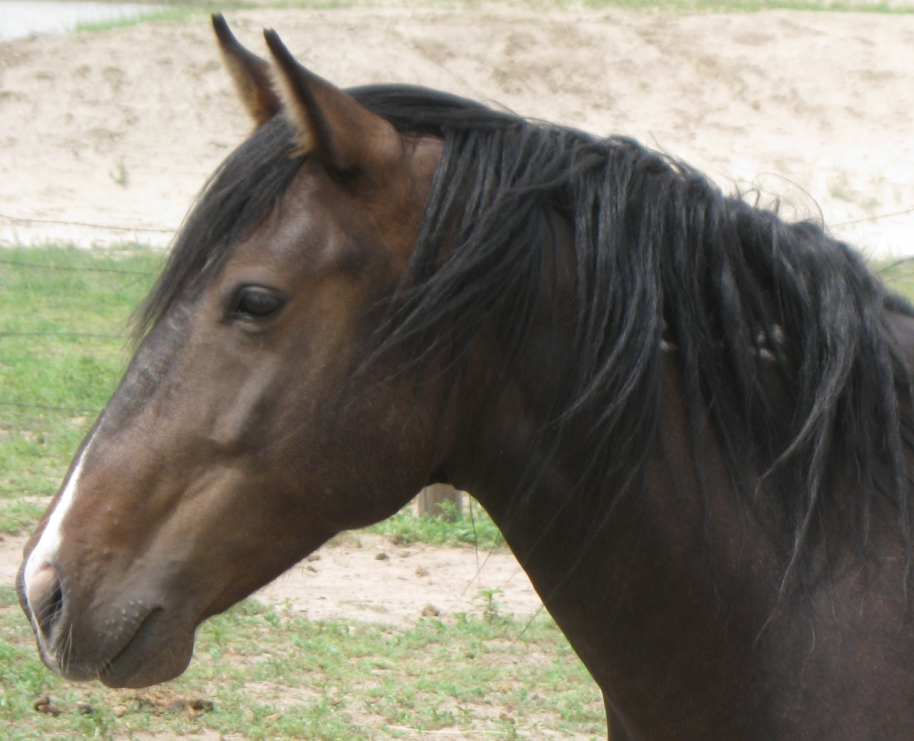 Scientific critique (and here & here here blog articles ) of chemical sterilization in the field .
A sound proposition - 10 year moratorium on roundups in order to scientifically study the herds 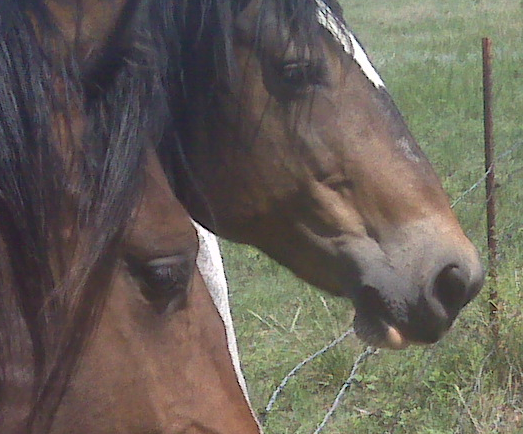 I hope the best for the wild horses of American west.
Posted by Dario T. W. at Wednesday, June 25, 2014 No comments: 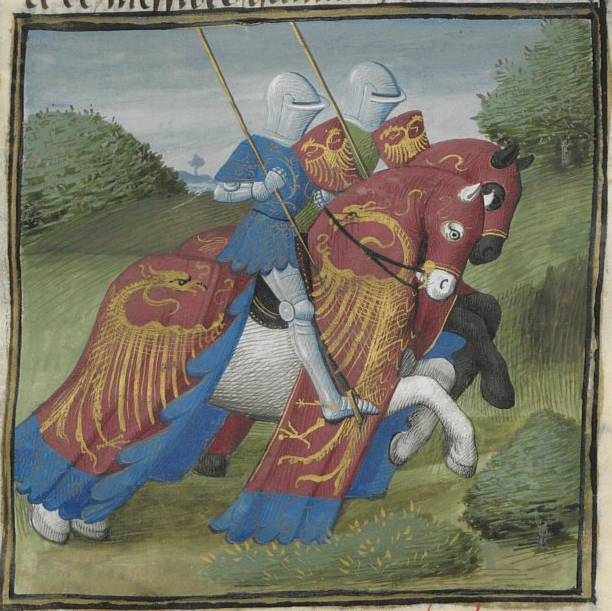 Salve,
French National Library gallica has wonderful collection of manuscripts available on the net in very high resolution - many thanks!
Today I was perusing some of the manuscripts from the XV century and found several images that caused awe and wonderment, and aroused my interest so decided to bring some of them here. This is the manuscript - direct link 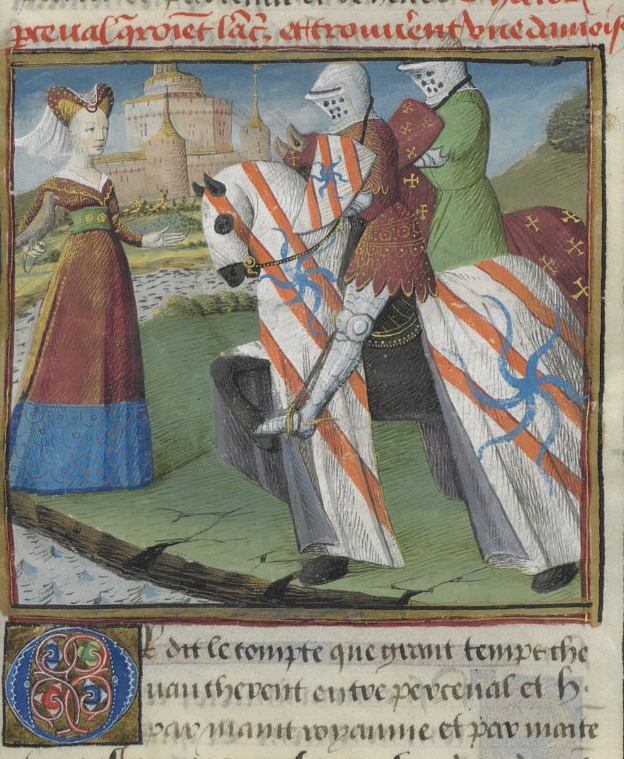 The subject matter is the famous knight of the European medieval romance - Lancelot du Lac (sir Lancelot ) , one of the most important personages of the Arthurian Legends, and a Knight of the Round Table (eg a book by Howard Pyle from archive.org, with some wonderful American Golden Age of Illustration images). By the way, if you like figurines and/or little soldiers this production is splendid. 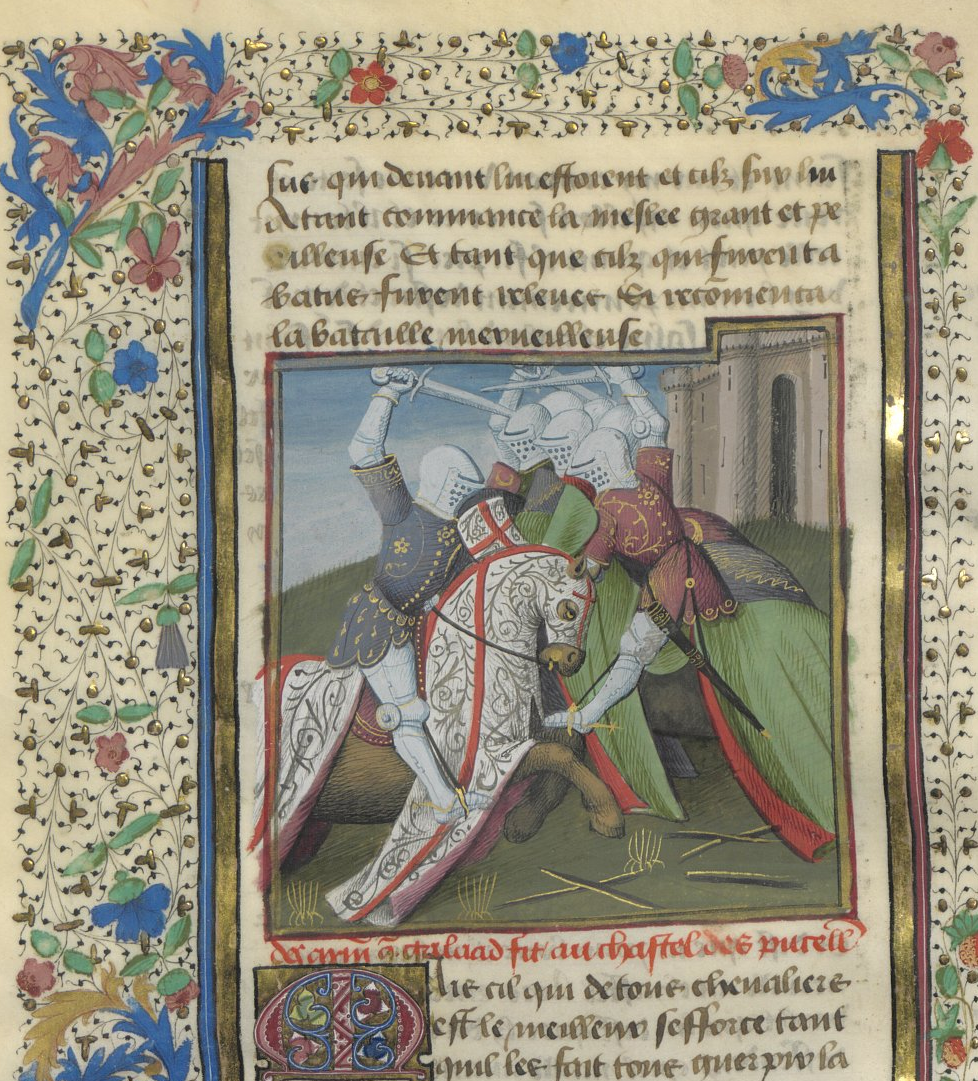 Apart from the paintings and interesting information they provide, I immensely enjoy the borders and all the arrangements surrounding the miniature paintings. 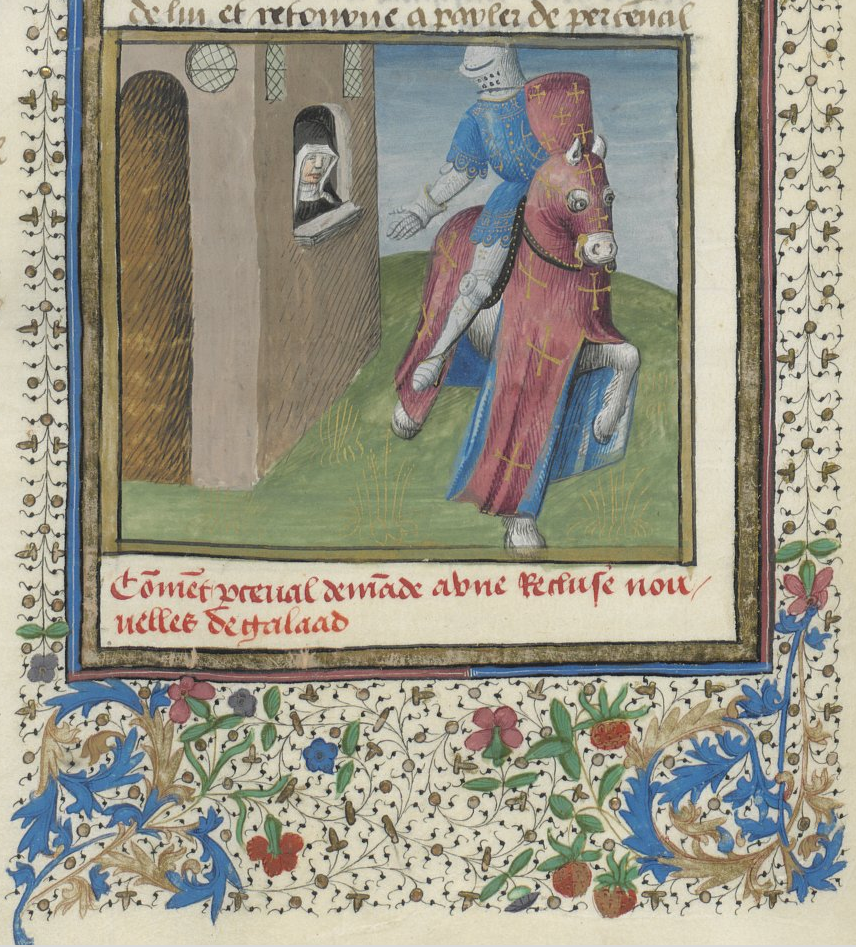 Gallica has a presentation on how the illuminated manuscripts were produced, and FitzWilliam Museum has a similar presentation, so your choice :) .  If you still hungry, there is quite a lecture to be watched:  The Making Of Medieval Illuminated Manuscripts by Dr Sally Dormer.
. 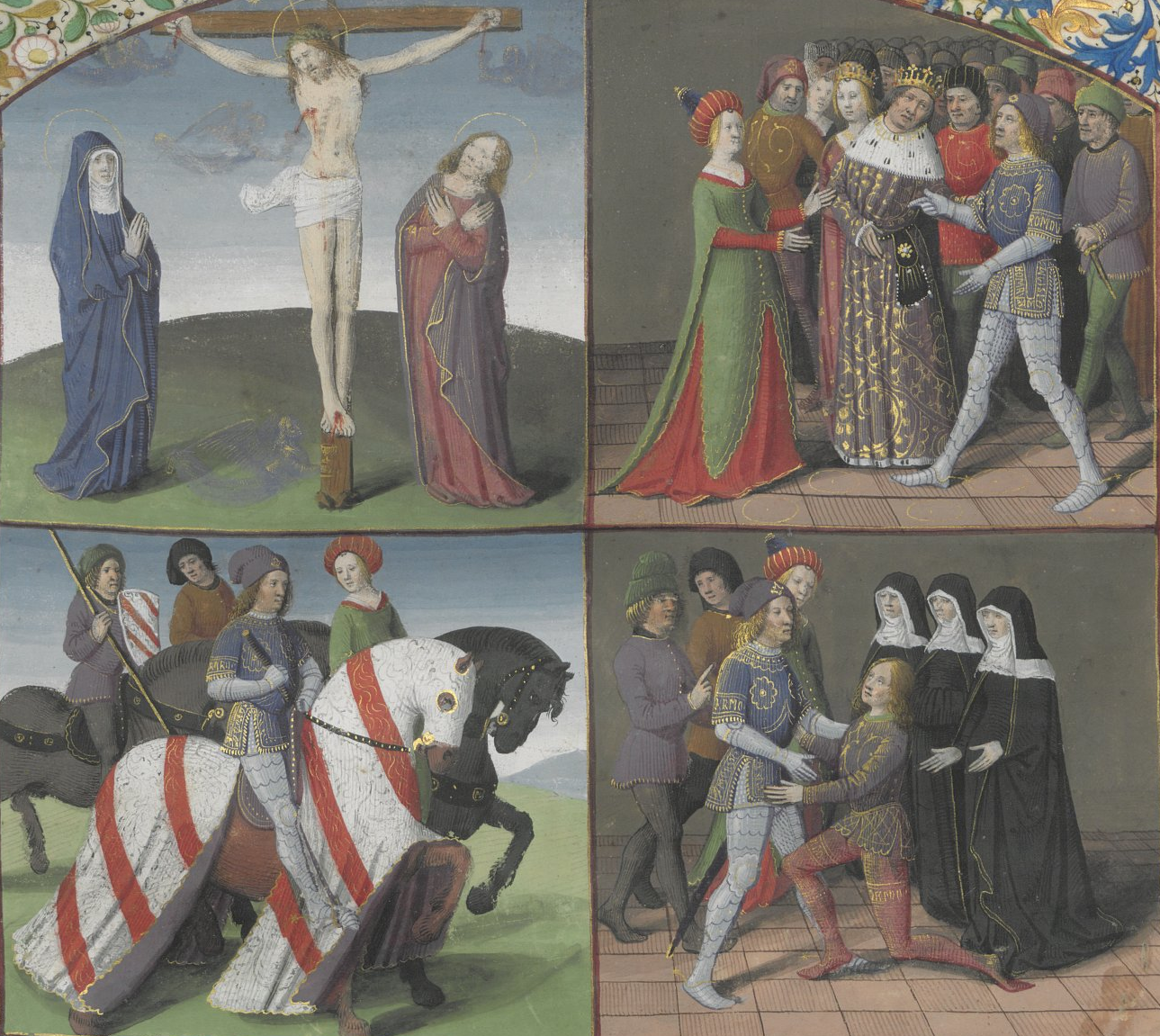 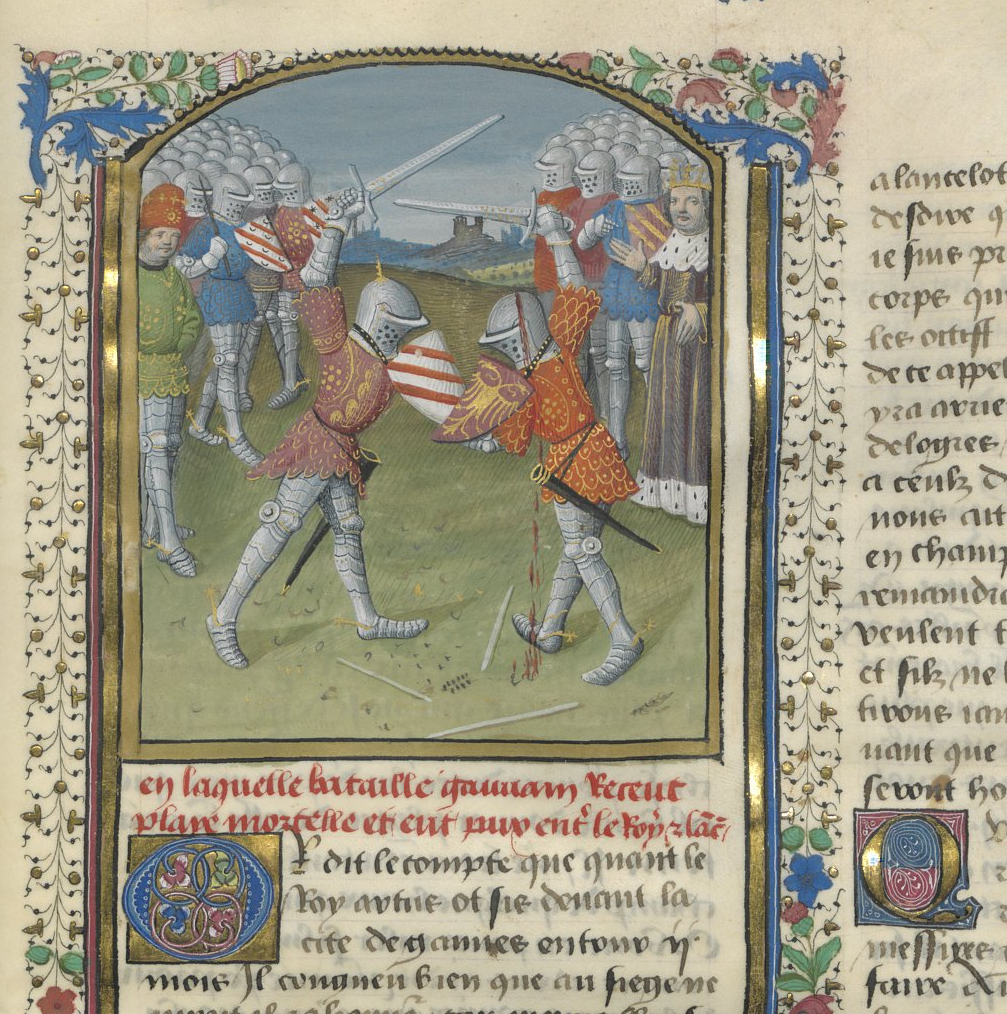 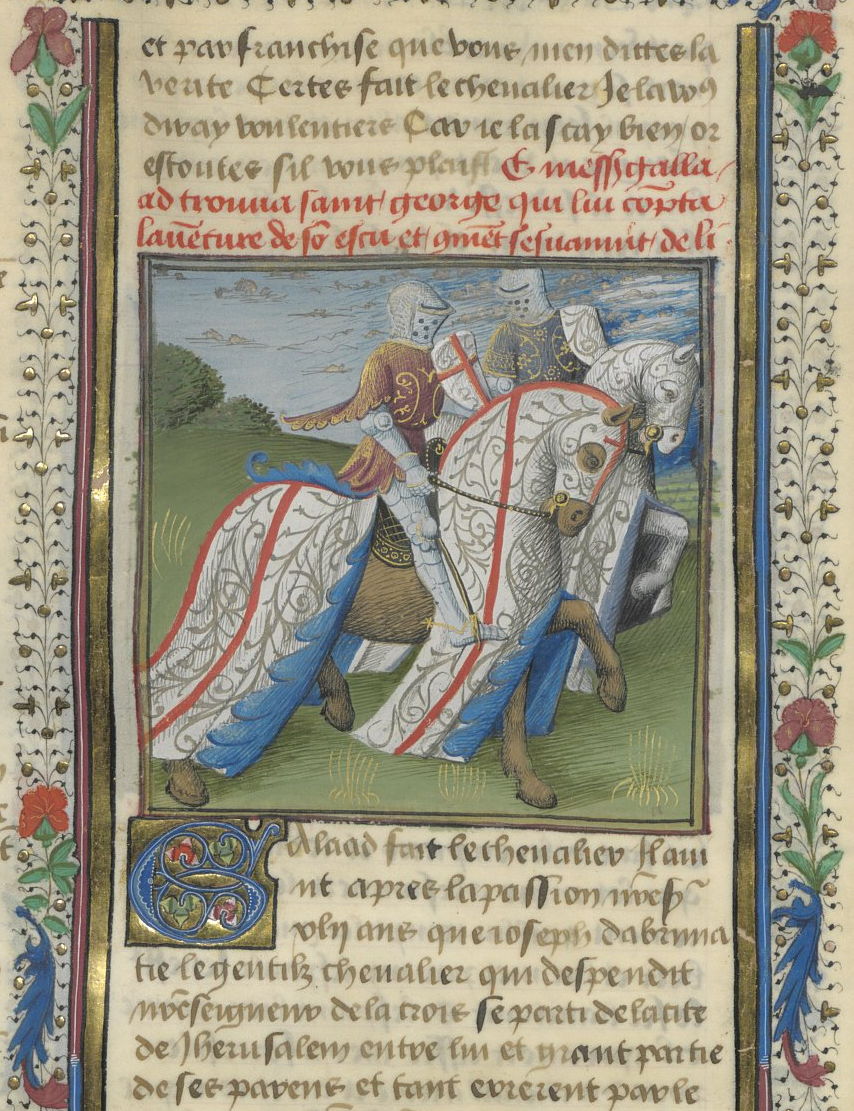 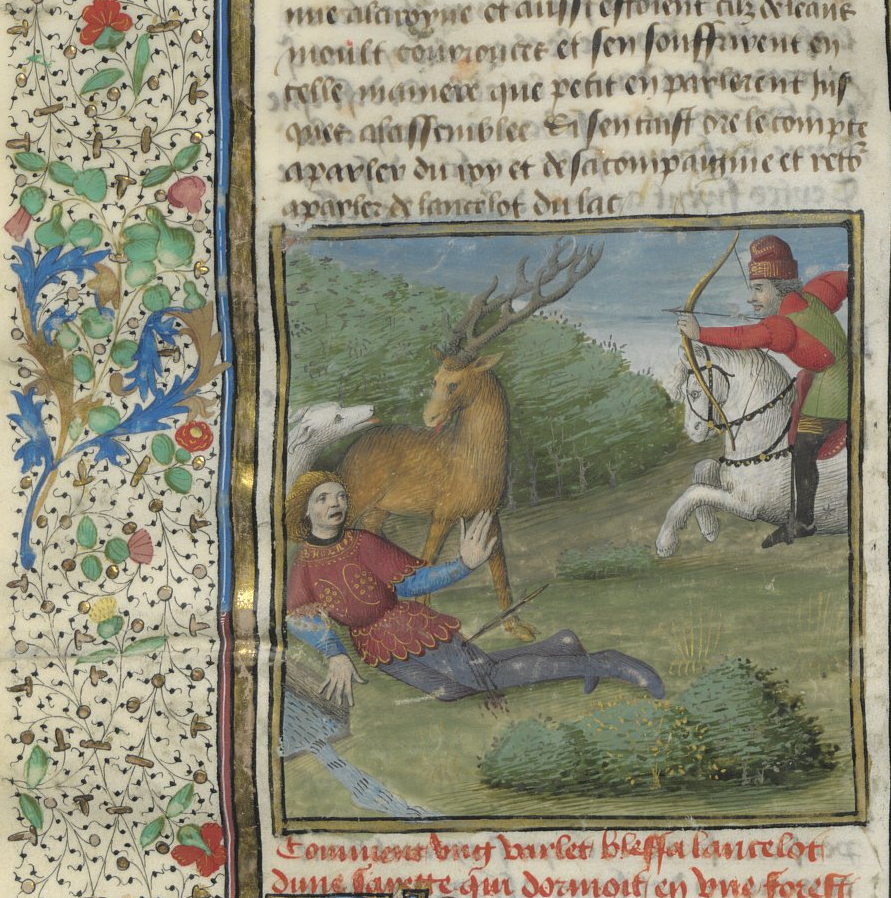 a horse mounted archer in the above image  is seemingly unusual but taking into account the context, XV century, quite typical in the French and English milieu.

Wikipedia Commons has some media category related to sir Lancelot for us to peruse and enjoy.
Archive.org has a book, The legend of Sir Lancelot du Lac; studies upon its origin, development, and position in the Arthurian romantic cycle (1901), by Jessie Weston, author of numerous books on the Arthurian legends
Also, archive.org has the British TV series The Adventures of Sir Lancelot - 10 episodes, all in public domain.
I will return to sir Lancelot du Lac and Arthurian Legends, and our medieval chivalry in general in the future.
enjoy

Ps
Recently, I was privileged, thanks to one of the authors Zbyszek Hundert, to read a very nice piece of research on the identity of the Polish winged hussar who attacked the Swedish king Karl Gustav during the battle of Warsaw 1656 AD, so in the near future I will expand on the subject, I hope.
Posted by Dario T. W. at Sunday, June 08, 2014 No comments: