a sketch in progress - Lisowczyk

Salve,
a sketch in progress - working over an old watercolor -  I am using GIMP and MyPaint 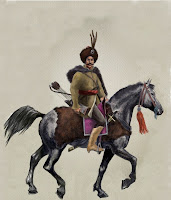 This time the subject is loosely based on the Lisowczyk - lisowczycy (plural) or Liswoski kozaks theme -
wiki/Lisowczycy
Juliusz Kossak's Lisowczyk
Kossak's lisowczyk2
Michalowsk Jezdziec Lisowczyk
Brandt Pochod_Lisowczykow.jpg
Brandt Lisowczycy_przed_gospoda
Brandt Lisowczycy Strzelanie z luku
in the last painting please note the Moldavian border fortress of Khotin (Chocim) in the background  wiki/Khotyn  .
The Polish-Lithuanian  Commonwealth army is pictured in the foreground, the gathered banners and regiments and Cossacks are already getting a horsearchery show by the lisowczycy while the Polish forces have been preparing to fight to death at  this southwestern border of Commonwealth, being entrenched within their much fortified camps around the Khotyn fortress, they know the Ottoman Turkish army augmented by the Tatars would come soon, it is AD 1621.

I will post progress of this one too, later next month, I hope..

ps
interesting blog (in Polish)  by painter Jarek Glod who is copying/painting great Kossak and other masters' works and showing his own works' progress  http://nabial.blogspot.com/2008_11_01_archive.html
Posted by Dario T. W. at Sunday, November 28, 2010 3 comments: 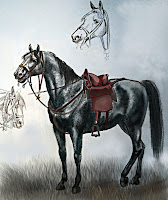 ps
a little sketch after drawing by Juliusz Kossak
Posted by Dario T. W. at Thursday, November 25, 2010 No comments:

Salve,
Last month I visited the Rocky Mountains of Colorado and came across some Mustangs (aka wild horses) that had been captured by the BLM (Bureau of Land management) and sold of at a public auction. 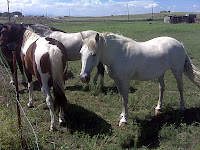 Horses in these pictures come from Nevada and Wyoming, captured at a tender age of 1 year (yearlings), and since then have been living in a green pasture close to Elicot, Co. Note that until the summer the gray gelding had been a stallion. 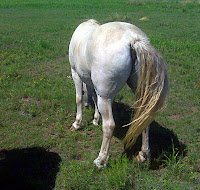 In these pictures you can not see clearly but they do have the BLM freeze markings and I will add some more where they are visible. 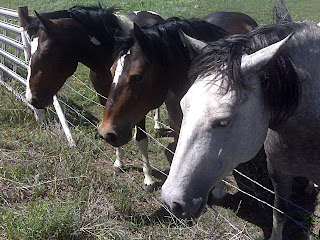 Salve,
a bit of an update on my Muscovite Reitar started here muscovite-reitar-1660s 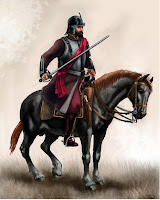 I added double reins and a curb-bit (Polish. munsztunk) on a horse, made horse's neck a bit longer;  on the officer - a longer beard (hope you like it better, Kadrinazi),  and then some other little equipment parts that make this soldier appear more 'historic'
pa ka
Posted by Dario T. W. at Tuesday, November 23, 2010 5 comments: 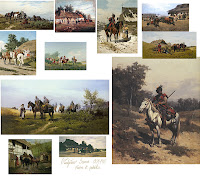 Salve,
today a little too forgotten painter of the Munich School of Polish painting:
Władysław Szerner  agraart.pl szerner  , born in 1839, studied art at the Warsaw School of Fine Arts  beginning in 1862.  Unfortunately for his studies one year later,  when Motherland called, he, a very promising artist, joined the Polish army during the 1863 January Uprising http://en.wikipedia.org/wiki/January_Uprising . As we know the January uprising ended in defeat and pan (Mr.) Szerner was forced to emigrate after the defeat to France and eventually settled in Bavaria.
After studies at the Munich Art Academy - with various German masters, Alexander  Wagner, Hermann Anschütz and Alexander Strähuber,  he became an independent artist, and his atellier was next to the famous one of  Jozef Brandt, and these two Polish artist became fast friends, especially because they shared similar interest in Polish history and genre paintings. Their freindship lasted for life and Pan Szerner often traveled with Brandt to his estate in Oronsko, near Radom, and partook in Brandt's excursions to the Old Polish Borderland aka Kresy (Ukraine). Being a member of Munich Kunstverein  kunstverein-muenchen.de , he exhibited there from 1874 until 1909, as well as in Lwow(Lviv), Cracow and Warsaw. He was admired by many literary personages of the XIX century Poland, eg J.I. Kraszewski en.wikipedia.org Kraszewski prized him for being able to capture scenes of Poland's countryside au naturel, with believable detail and with joyful flavour so characteristic of these picturesque sites .
He not only painted horses and the images of Old Poland, but also was a skilled graphic artist and draughtsman,  and was able to copy in pencil many famous paintings by his friend Brandt so they could be engraved and printed in various contemporary periodicals, eg 'Kłosy' and 'Tygodnik Ilustrowany' of Warsaw, to the delight of many a reader.
Later on he started painting the 'exotique' and wonderfully colorful inhabitants of the eastern Carpathian Mountians - the Huculs (Hutzuls).
His art is in many private collections, and his works fetch reasonable prices at auctions. He had a son, also a painter, and their quite similar works can be subject to forgeries, as father's works are more expensive nowadays.
Posted by Dario T. W. at Sunday, November 21, 2010 No comments: 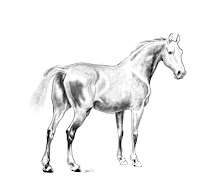 salve,
todays image came about when I was looking at the paintings of the Polish XIX century painter (and the XIX century Munich School of Polish painting  main persona) : Jozef Brandt, whose horses, from the Old noble Polish Ukraine, were splendid creatures  of  legend and reality, both at the same time :)
a nice display of 'mosci' Jozef Brandt's art - pinakoteka.zascianek.pl/Brandt

This the effect of my 2 hour afternoon study in digital brushwork - Mypaint and Gimp PS, great open source software for Linux Ubuntu. 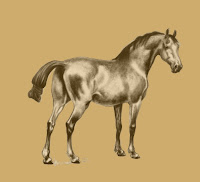 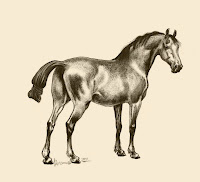 
ps
a little peek at the horse and military art on the Internet:
by chance I found this fine artwork of Spanish military history painter (uses acrylics and watercolor) Angel Garcia Pinto and his blog. I must say that Señor Pinto's blog is a splendid display of his gorgeous historical illustration - angelgpinto.blogspot

the next artist's brushwork is fantastic:  he hauls from Catalunia (province of Spain) and he is the most exceptional painter of horses and Spanish XIX century  military history - don Augusto Ferrer Dalmau  -   arteclasic.com

a horse -playing with MyPaint 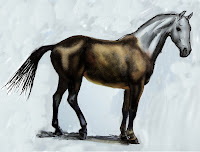 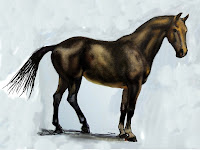 Salve,
this past July there was 600 anniversary of the battle of Grunwald (Tannenberg) and Polish-Lithuanian-Ruthenian victory over the Western European knights and Teutonic Kinghts.
I started working on this piece a while ago - it is far from finished, perhaps too far. It purports to show a Lwow banner 'ensign' mounted on his faithful 'dextrarius' aka English language  'destrier' - I am not going to refer here to the Wikipedia page on the subject as it is not a good entry.

Salve,
some native Amerindian themes, I hope to do many more in the future, especially Cheyennes (I admit I have been looking at the XIX century Cheyenne Ledger art) and Comanches and Utes (been lately to a old battlefield place where more than 160 years ago Comanches and Utes fought, and 240 years ago Spanish-Apache-Pueblo expedition  was crossing the Continental Divide searching for the Cuerno Verde's Comanches) 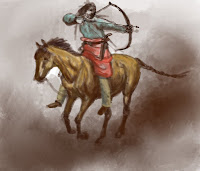 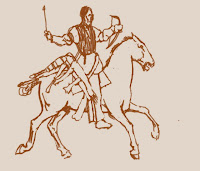 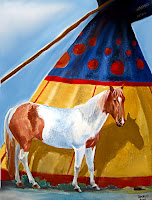 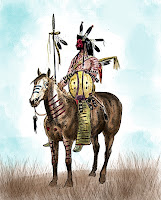 Salve,
this one is reworking of an old sketch into a new image, this time he is going to be a Ottoman Turkish cavalryman  or .. well, whether an akinci, delier or sipahi I do not know yet. Time period XVI century CE. 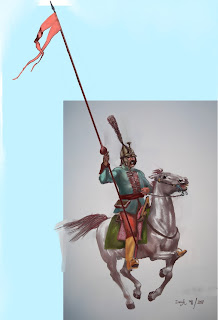 Salve,
I am working on this little animated one, this time i cannot decide what kind of weapons to give to this fellow - a kozak cavalryman (not a Cossack) or Polish-Lithuanian light rider. Wearing a zupan, bare-headed, with his bow and arrow, and faithful sabre... the rest it is still to be seen 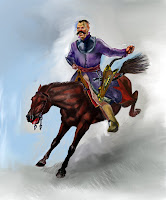 Salve,
a bit of improvement work on this old painting that has never been finished - purports to show Gallic horsemen of the second half of I century BC.
Hopefully I will finish this one and another that shows a horseman hunting a wild boar 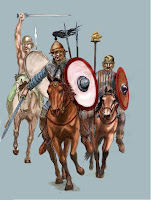