Salvete Omnes,
April is winding down fast, the lovely Primavera has  finally arrived to stay, so perhaps the time has come to do some work outside, weather permitting - :)

I have endorsed some writers of historical fiction on this blog - like Christian Cameron, Jacek Komuda or Harry Sidebottom, and I have already mentioned dr Helena Schrader.
Since 2015 I have been following her blogs etc  and I strongly urge you,  if you like historical fiction and learning about ancient and medieval history while surfing the net, to visit her sites and read some of the articles and fragments of her novels. I purchased all three of her novels on Balian of Ibelin and one titled St. Louis Knight, enjoyed them immensely
Recently I have enjoyed the series titled Women in the Middle Ages (4 articles)   and Myths of the Middle Ages (6 articles), as well as the ones about the Crusader Kingdom and its society etc.
I have not read any on Sparta and Leonidas but I will get to that part, God willing .
today dr Schrader published this entry- Physical Factors in Historical Fiction: Distance by Land - it is brief enough to occupy many a short-tempered reader of history, and very informative. 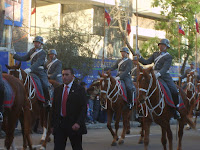 Salvete Omnes,
I just discovered this equestrian sport named Working Equitation- looking at some videos on Facebook showing Hungarian competitors. It looks like it is a mix of various horse riding traditions from Europe - Portuguese, Spanish doma vaquera, Camargue, Italian with admixture of American (from Brazil, Colombia, Mexico and US) elements (and perhaps Australian as it is practiced in Australia).
It consists of four elements (videos explaining each step in the link)- Dressage Trail, Ease of Handling Trial, Speed Trail, Cow Trail (team only)
It promotes strong riding skills as in classical horsemanship of Xenophon, courage and what is more important a rather close and friendly partnership between a rider and a horse.
Some photos from Wiki 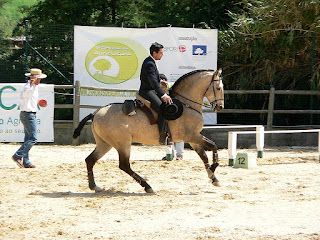 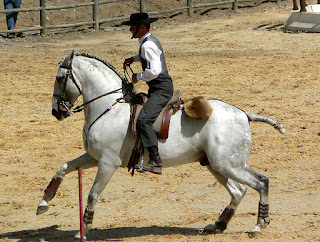 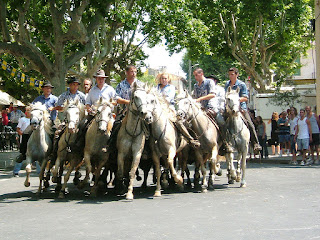 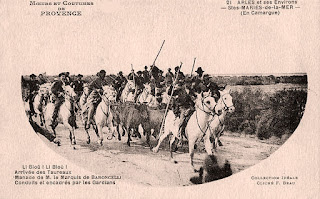 There is also a US chapter of this equestrian sport.
There is no Working Equitation in Polish Republic at this moment, at least to my knowledge.
Valete
ps
all images are from Wikimedia Commons
Posted by Dario T. W. at Wednesday, April 25, 2018 No comments:

A couple thoughts on history and remembrance

Salvete Omnes,
on April 19 several anniversaries meet -
today is the 75th anniversary of the Warsaw Ghetto Uprising, one of the final chapters of the Polish Jewry and their perhaps 800 years long history in Poland.
It was a desperate struggle of a tiny minority of the Polish Warsaw  Jews who took up arms against the Germans, not unlike the zealots and sicarii (the last name, plural Latin, is a bit weird but what do we know - dagger men might have been their name, since it was later used by the Romans to denote an assassin/murderer or sicarius) who defended Masada against the Roman Empire - whether the story told by Josephus the traitor/turncoat Flavius is true or myth is another matter.
One thing that always returns with each anniversary of the Warsaw Ghetto Uprising is the issue of falsifying history for idealogical propaganda and short-time goals.
Namely, the Jewish fighters who fought as the main and most significant group of resistance in the Warsaw Ghetto -in terms of numbers, equipment and military potential & achievements - was the Zydowski Zwiazek Wojskowy (Jewish Military Union) or ZZW .  Zionist and  Polish Underground State-affiliated it was strong and numerous, led by experienced former (pre-1939) Polish military officers and soldiers, it could offered leadership and means of resistance. The ZZW fighters mostly perished during the war and very few remained to tell their story.
- here one of ZZW fighters, heroic Pawel Frenkel,  is celebrated on this stamp.


However, in the post-World War Two research and publications the other organization received the honor of being the leading resistance group during the Ghetto Uprising, the Zydowska Organizacja Bojowa ( Jewish  Combat Organization), and ZZW was forgotten almost completely .
ZOB was a Communist organization and since the Soviet Union took over the Polish Republic after Jalta at al - thank you President D. Roosevelt, then they put the heavy hand on the narrative and suppressed the facts in their fine way and fashion.
Since 1945 the Communist Poland, home to a ZOB survivor Marek Edelman,  had started  perpetrating the myth of the exclusively communist resistance to the Nazi Germany and its allies during the war. Right-wing groups like ZZW were discarded to the history wastelands and ought to have been forgotten.
Since 1990s both in Poland (about Betar & ZZW) and Israel the idea of ZZW being the primary resistance group have been slowly breaking the wall of silence and resistance to the official Communist narrative.
One of the ZZW fighters dr Dawid Wdowinski survived the Ghetto Uprising and while living in NYC wrote a book about this experiences during the terrible times of Holocaust that can be had from Amazon.
One may say that in historical research in the end the truth will always win... or so it is hoped.

Today is also the 209th anniversary of the battle of Raszyn 1809, fought by the young army of Duchy of Warsaw under prince Jozef Poniatowski against the Austrian invading army. The battle marked the beginning of reconquest of parts of the partitioned Poland (including Krakow but they were denied already liberated Lwow by the Russians) by the Polish army during the 1809 campaign. Polish writer Waclaw Gasiorowski immortalized this battle in his novel aptly named '1809' (part of his Trilogy).
In English you can read Roman Soltyk account, translated by Nafziger, from Winged Hussar Publishing (on Amazon).

Pacem Aeternam to all heroes!

Salvete Omnes,
today we are back on the Great Plains - so to speak - and a rare glimpse into the world of Plains Indians
Smithsonian Institution has had many images from their collections digitalized.
One of them is a set of 16 ledger drawings  by a rather unknown artist Charles Murphy  - Cheyenne - on the tipi covers and social customs of the Cheyenne, but there are more ledger drawings drawn by Charles Murphy.
They come from the James Mooney collection, and it was Mr. Mooney, author of many books eg Kiowa calendar history,  who commissioned them
Full Record from the Smithsonian [terms of use]:
Mooney, James 1861-1921
Physical description:   1 volume of 16 drawings : graphite, colored pencil, and ink ; 23 x 29 cm
Culture:   Cheyenne Indians, Indians of North America Great Plains
Type: Ledger drawings
Date: 1904 1904-1906
Notes:    The drawings were commissioned by James Mooney of the Bureau of American Ethnology. A typed label in the book explains the purpose of the first drawing: "Design for a full size group, for the Field Museum, where the tipi and other equipments are now deposited. Tipi, travois, costumes, tipi furnishings, etc. made by Cheyenne Indians. Drawing also by a Cheyenne Indian from suggestion and dictation of owner of original tipi. James Mooney."
Summary:  Tablet containing 16 drawings including pictures of tipi designs, camp scenes, games, and Sun Dance ceremony. Inscribed, "Cheyenne Indian Sketches, Tipis No. 2" and "Drawn by Nakoimens = Bear Wings, alias Charles Murphy. Cheyenne, Cantonment, Okla"
Cite as:  Manuscript 2531, Volume 10, National Anthropological Archives, Smithsonian Institution
Repository Loc.:  National Anthropological Archives, Smithsonian Museum Support Center, Suitland, Maryland

nota bene I have got this book In Sun's Likeness and Power, 2-volume set: Cheyenne Accounts of Shield and Tipi Heraldry, authored 'jointly' by James Mooney and father Powell )  and what a study it is.
Valete!
Posted by Dario T. W. at Monday, April 16, 2018 4 comments:

Salvete Omnes,
Waclaw Rzewuski sketches from Arabia continued, from his manuscripts at the Polish National Library -

Salvete Omnes,
nota bene there is a book coming soon and with my illustration on its cover - by Polish historian and writer Witold Biernacki titled  Pressburg 1620. Jesienna kampania ksiecia Gabora Bethlena. (PRessburg 1620, The Autumn Campaign of prince Gabor Bethlen -  from Infort Editions publishing house.
This book, which I haven't read yet, is part of the Pola Bitew (Battlefields) series, and is devoted to the miltiary struggle of the Hungarian prince Gabor Bethlen against the Hapsburg Empire during the initial state of the 30 Years War.
Inside apart from the very interesting narrative of this campaign there are illustrations - 8 in number - by Mr. Gyozo Somogyi, Hungarian master illustrator (I wrote about his work already).
Mr. Somogyi and Zrinyi Publishing House from Budapest, Hungary kindly provided this set of illustrations showing Hungarian soldiers of the 30 Years War.

Valete!
ps
my other set of illustrations  that were to appear along the new edition of Radek Sikora's Lubieszow 1577  has been missing in action. In fact it is the publisher - Wydawnictwo Erica - who has delayed or abandoned this publication, and it has been almost a year since it was supposed to go into print, which is really a pity since I think I painted a very nice set of illustrations  -  some 27 plates, with coats of arms and other goodies... c'est la vie.
Posted by Dario T. W. at Saturday, April 07, 2018 No comments:

Sketching or a daily sketch

Salvete Omnes,
Spring is coming fast to the Northern Hemisphere and perhaps with more sunshine will come more outdoor activity, but on my mind there is this idea of reviving my daily sketch posting.
well, perhaps not daily, but frequent or at least more than lately - :)
so to start with this idea a sketch - the source of this attempted illustration may be going back to the Polish Pancerny  in Certamen Equestre from 1670s.

A Kurdish horseman and a Turkoman

Salvete Omnes,
emir Waclaw Rzewuski and his manuscripts - hopefully soon will be published for all to enjoy -
Meantime, some sketches from these manuscripts - 3 volumes, including two self-depictions in two different costumes

Salvete Omnes,
happy Easter - wesolego Aleluja  Χριστὸς ἀνέστη! Ἀληθῶς ἀνέστη!
I hope your pisanki and swieconka are blessed and you all had a great Easter brunch -
some of my favorite Crucifixion and Resurrection paintings
and one from Poland - circa 1509 AD