I have been reading some books by a British historian Charles John Ffoulkes, and thus I came across a XVII century work by a French soldier[1],  and writer Louis de  Gaya,  titled Traite des Armes, published during the reign of Louis XIV in 1678.

Ffoulkes edited the 1911 publication of the historic treatise, and provided quite interesting introduction and overview of this Louis XIV's era work.
The book has some charming and quite interesting illustrations by a French engraver Nicolas Guerard and thus I am sharing them with you.

Also, I find these depictions of the period militaries interesting, albeit strangely our Polish military is curiously unhorsed and lance-less...
Polish, Hungarian and Turkish troops according to de Gaya 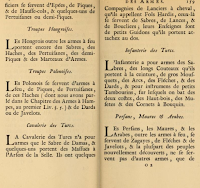 French, Spanish, English and of the 'Germanies' 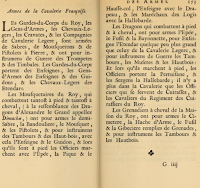 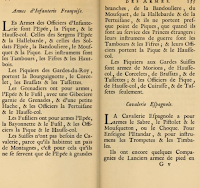 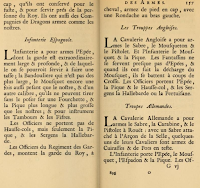 Salve,
so it is Christmas and soon will be New Year 2016.
I wish you all Merry Christmas, especially if you are celebrating the Christmas' Eve then wonderful feast and plenty of fine gifts and joyful time with your Family and Friends.
This year let us celebrate Christmas with a Flemish Renaissance master Pieter Bruegel - or rather with his wonderful paintings, where our Christian Gospels are most skillfully mixed with the master's worldly affairs, everyday life and little humor. 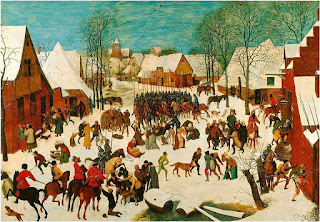 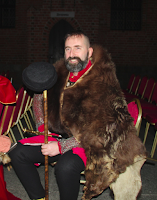 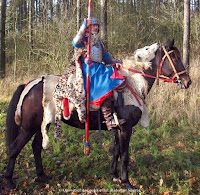 Messers Leszek Struczynski et Radoslaw Sikora  started a new channel on youtube and a page on Facebook. Both web-places bear the same title - The Tales of Old Poland.
We should probably expect storytelling [In Polish] that will be grounded in historical context and research, and plenty of reencting and field experiments, done by and with assistance of trained horses and husaria reenactors, and perhaps other reenactors of the Old Poland's military.  Ser Radek Sikora promises to have storytelling full of history with some jest and joke .. . horror - :)
What could I add -  perhaps that I applaud this splendid idea, that I strongly support their effort and recommend this work that will be carried out by our leading husaria historian and one of the most experienced husaria reenactors.
Enjoy
ps
images from the Facebook page - with all the copyrights limitations
Posted by Dario T. W. at Tuesday, December 15, 2015 No comments:

Salve,
my friend Patryk Skupniewicz 'published' his paper on the Tabriz Museum Battle Dish, allegedly a Sassanian workmanship.
I am giving this link here, aside from  my own obvious interest and fine merits of this work, because of a recent publication on the arts of Hellenized East where plenty of published artwork allegedly from the Parthian and Sassanian periods of Persian history can be seen that is very much unlike the Persian art we have been used to see  etc. Are those objects most amazing lost arts of the ancient Persians or very beautifully made 'fakes'?
The paper can be read and /or downloaded here.
The plate in question - with some detail 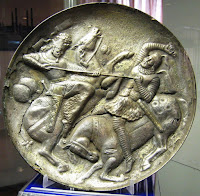 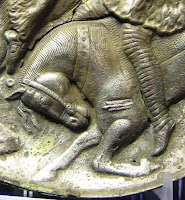 The photos above come from the Persian Horseback Archery Association.
Enjoy
Posted by Dario T. W. at Monday, December 14, 2015 1 comment: 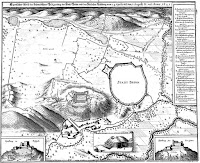 Salve,
I really like Wikimedia Commons - you can find amazing images of great size, allowing one to study the image.
So, I was looking for some period - AD 1600-1650 - images of cuirassiers (heavy cavalry) and other Western European cavalry, especially during the 30th Years War.
To my surprise and delight I came across this large canvass  from the Brno City Museum.

The painting shows the 2nd siege of the Moravian capital by the huge Swedish army augmented by the Transylvanian soldiers of Prince George I Rakoczi that took place during the four months of AD 1645 . 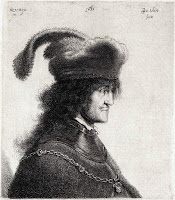 The besieged city was heroically defended by the small contingent of professional soldiers and by the town burghers under the command of  Louis Raduit de Souches , a son of the French Huguenot emigre, who was to have a very distinguished career within the Imperial army. 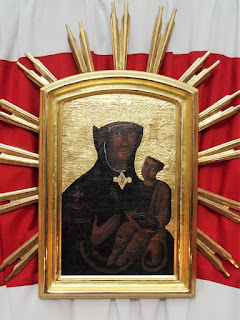 The defenders were helped by their faith, this being Roman Catholic creed, and we cna be certain that in the hearts and minds of the defenders not a small trust was placed in the holy Madonna from the Saint Thomas Church in Brno, one of the 'Black' Madonnas venerated in Polish (eg Black Madonna of Czestochowa) and Czech lands. 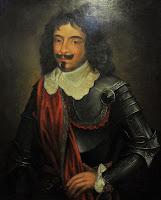 At the moment I do not know much about the contents, i.e., the troops shown in this painting, but nevertheless I want to share it with you.
Slowly and with some difficulty I will read the Czech accounts (nota bene there is more of the painting in the article showing a Transylvanian cavalry unit with a banner) of this siege and perhaps learn more about the contents of the painting. 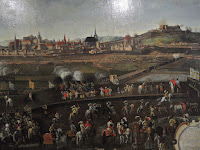 I think we are seeing the meeting of the Swedish commander, Lennart Torstenson, with a commander of the Transylvanian auxiliary contingent.
Until the next time...
Enjoy  -:)

Salve,
while researching  the equestrian statues from the Medieval period, mostly from the Italian states, I came across this very unusual article(in pdf) authored by Gino Fornaciari et al.  A different version of this study via academia.edu.
The article is a step by step presentation of the autopsy of the preserved 'mummy' of  the XIV century Veronese prince and knight Cangrande della Scala, who was a very active warrior , statesman and the Ghibeline League supporter - his last deed was to take Treviso, in Veneto, and if you traveling in Italy do visit, it is a lovely small city with good cuisine and nice people (visited last year).

Cangrande was immortalized in the Decamoron and the Divina Comedia, and in this funerary equestrian monument. 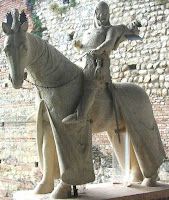 The authors of this multidisciplinary study conclude that this warrior-prince (1,73 m tall, healthy and robust otherwise) was cut short (he was only 38 years old) as he was poisoned with foxglove aka digitalis plant ('naparstnica' in Polish), present in his system. 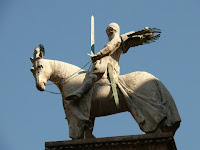 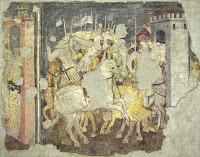 There are some figurines of Cangrande I della Scala done by the militrary modelists - [1] , [2]
giving a sens of the richness and beauty of his chivalrous appearance.
Enjoy
ps
all images are from Wikimedia Commons
Posted by Dario T. W. at Tuesday, December 08, 2015 2 comments:

'El hombre hace al caballo y el caballo al caballero.'
Salve,
I am an admirer of the Iberian equestrian arts, including the art of el rejoneo or 'toreo a caballo' (bullfighting from horseback).

I came across this short but stunning video showing one of the modern masters of this equestrian martial art Diego Ventura and his partners, those being his brave Iberian horses.

The video is official and free to all via youtube.

Wikimedia Commons library  of el rejoneo - what a great display of unity of horse and rider, brave bulls and splendid horsemanship.

Caution, it is about killing per se and therefore it is graphic, violent and  very real, and perhaps disturbing to many of you, hence make your own decision if you want to watch it.
enjoy
Posted by Dario T. W. at Tuesday, December 08, 2015 1 comment: 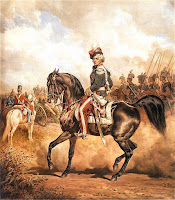 Salve,
a very important article on the use of a bit within the sport of dressage, especially the Anglo-American one... it is obviously not a recent one, but still very important and interesting 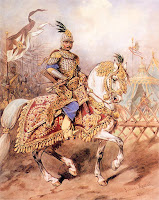 The Definition of "On the Bit" by Dr. Max Gahwyler and Bettina Drummond - via The Eclectic Horseman. 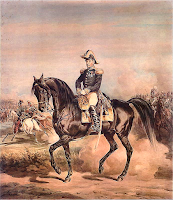 It behooves one to read it and ponder the implications, 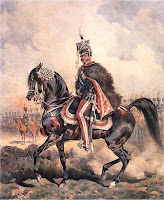 ps
I decided to illustrate this short entry with some XIX century paintings by great Juliusz Kossak
Posted by Dario T. W. at Friday, December 04, 2015 1 comment: