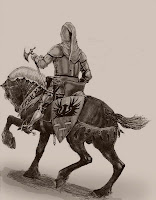 This July 15 is the 599 anniversary of the victorious battle of Grunwald .
The Battle of Grunwald (or 1st Battle of Tannenberg) was fought on July 15, 1410 between unified armies of the Kingdom of Poland and the Grand Dutchy of Lithuania, under the command of His Royal Majesty Władysław II Jagiełło (with his trusted councilor bishop Mikolaj Traba having had most likely developed this war's strategy and summer campaign), against the army of the knights of the Teutonic Order and their Western (English, German, French etc) knights-guests, led by the Grand Master of the Order, Ulrich von Jungingen.
This was one of the most important battles of the late Medieval Europe, and the probably one of the largest battles to involve mounted knights fighting one another with lances, tucks, maces, warhammers, axes, swords and daggers.
Notwithstanding the knights there were plenty many of commoners that took part in this herculean struggle, including mercenary infantry from as far away as Italy (Genoa), Tatars, Hungarians, Ruthenians (today's Russians, Belorussians, Ukrainians) , Czechs, and perhaps Slovaks. As usual you may read the depiction of the battle described in many websites on this glorious net, e.g. Wikipedia.
Every year there is a great reenactment of this battle in the same fields where the final mortal struggle took place six centuries ago, I think I will attend the next year 600 anniversary, it should be fun.

Well, I just want to commemorate this anniversary with my 3-penny post, also remembering one of the most fascinating knights ever to have been born in the Polish realms – Sir Zawisza Czarny z Garbowa, of the Sulima Coat of Arms ( a great specialist on the subject of the Polish nobility coats of arms but unfortunately passed away friend Mr. Suligowski would have appreciated this post a lot :) - rest in peace, Panie Suligowski).
Sir Zawisza is very special in our Polish history ans psyche, as to this day he symbolizes the virtues of honor, duty, and courage; and his spirit is still carried in the hearts of Polish scouts (harcerze) and perhaps soldiers of the Polish Armed Forces. His life story does merit at least one Hollywood film, perhaps one day...

So I decided to show two old drawings of a knight with his coat of arms -Sulima. I really never draw knights, and these two are rather old, from the time when his majesty 'read my lips' Bush Sr. was el 'presidente' of the US or slightly little after when the great cigar smoker and truth seeker Billy Clinton assumed the post of the Commander-in-Chief (still pissed at him for having bombed into the stone age the most faithful US ally in the Balkans, Serbia ). Nolens volens I cannot vouch for any arms and armor correctness, this is for a pure enjoyment.
Could not resist to include in this post the most emotionally charged (it is an allegory and not a historical reconstruction) painting of the Polish historical genre of the XIX century – Jan Matejko's Battle of Grunwald. This artwork survived the World War Two, its survival aggravated by the numerous Nazi Germans attempts to locate and annihilate the masterpiece, and now can be admired in the National Museum in Warsaw – if you in Warsaw, Poland, do see it, it is breathtaking.
Funny thing is that pan Jan Matejko was a Czech by origin yet being born in Cracow he became more Polish than the ethnically pure (whatever that may be) Poles, and as history has it Pan Jan has become the most important Polish painter ever, no matter what all his jealous critics say - na pohybel a los criticos.

Hello,
July is a good month in my Polish military history - on July 4 1610 small Polish army defeated 6 times its size Muscovite-Western army at Klushino. On July 15, 1410 Polish -Lithuanian armies under king Wladyslaw Jagiello dealt crushing and overwhelming blow to the mighty Teutonic Order army, thus securing the most magnificent victory over the Teutonic Order and their Western 'guest' knights (from France, England, Reich, Italy etc) on the fields of Grunwald (Tannenberg).

Returning to hussars - today perhaps it may be desirable to talk a bit about the appearance of the winged hussars in the XVI (16th) century.
Hussars started as Serbian cavalry back in the early XV (15th) century, and became known to the West during the reign of the famous Hungarian king Matthias Corvinus, who came close to become the Holy German emperor himself, and was many times a victor of the Hapsburg armies - amongst other his 'Black Army' took Vienna from them and made her his capital. Polish military commanders met with the Serbian hussars of king Corvinus during the Silesian campaigns of 1470ties. They learned and by 1500 AD we find first units of Serbian hussars in the Polish Army. By 1505 first Polish knights joined these newly appearing type of cavalry, thus our Polish hussars had been born :)
Here you can find two images of future winged hussars from the beginning of the century and more typical image of a parade-attired hussar from the second half of the same century. As you can see they started as a very light, estradiota type cavalry, and by the second half they were already moving towards more medium or even heavier cavalry, with Turkish helmet known as shiszak, curved sabre, Balkan (Serbian) shield, long lance painted and gilded ( Renaissance fashion) but yet empty inside to compensate for the tremendous length of this weapon - up to 6,3m (21 feet).
Horses, stallions or geldings, are bitted with curb-bits, ridden in rather shorter Turkish or even Eurasian steppe fashion - very similar to the Spanish la gineta - with long spurs and wider stirrups. Ornate horse harness is a must and a long Oriental carpet like shabraque or czaprak (from Turkish language) covers horse's back. The pennon seen here -of the early Serbian hussar - is small, the later hussar has quite a large pennon but soon their pennons would grow up to 2,7 m ( 9 feet) in length... The second rider has a large peacock feathers bunch on top of his shishak but our and Hungarian future hussars will be covered with eagle wings, ostrich feathers, wild animal skins and other wild beast symbolic imagery going back to the ancient Eurasian steppe traditions. Then add tuck ( koncerz, panzersrecher, estock), mace, pair of pistols, war-hammer or war-ax (in the ancient Eurasian steppe tradition going back to the Scythians-Saka) and armour, and we will see fully developed winged hussar.
tbc
Posted by Dario T. W. at Wednesday, July 01, 2009 6 comments: