Salve,
today it is the feast of Saint George or Saint George's Day -  and let us celebrate with some illustrious paintings from the XIV through XVI centuries, when chivalry was beautifully depicted by period artists. 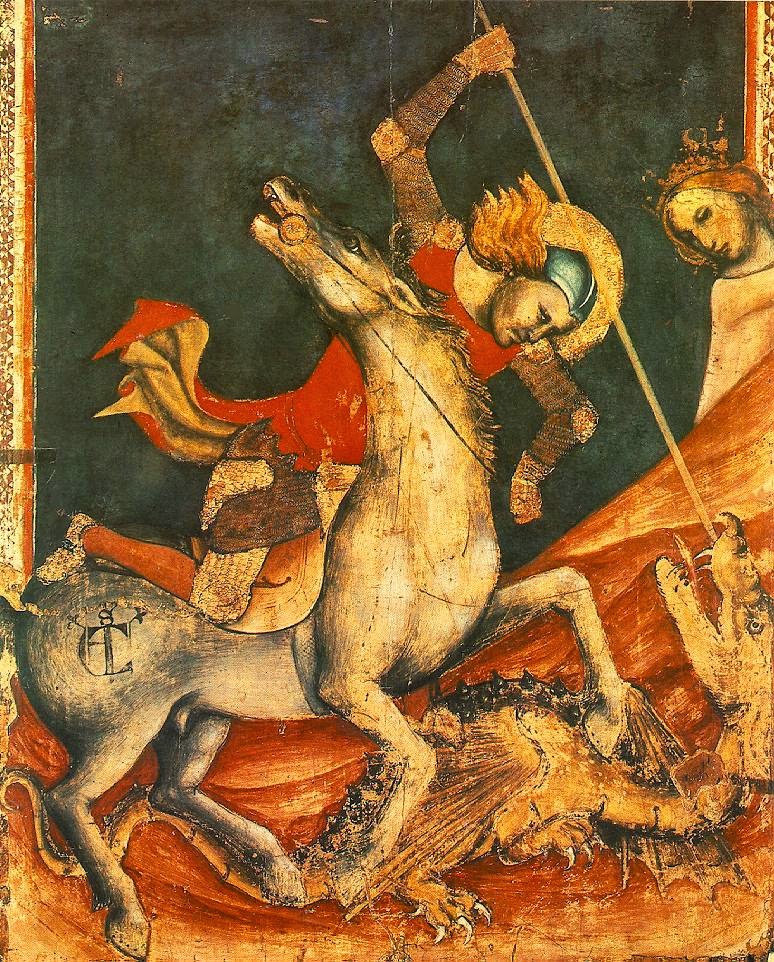 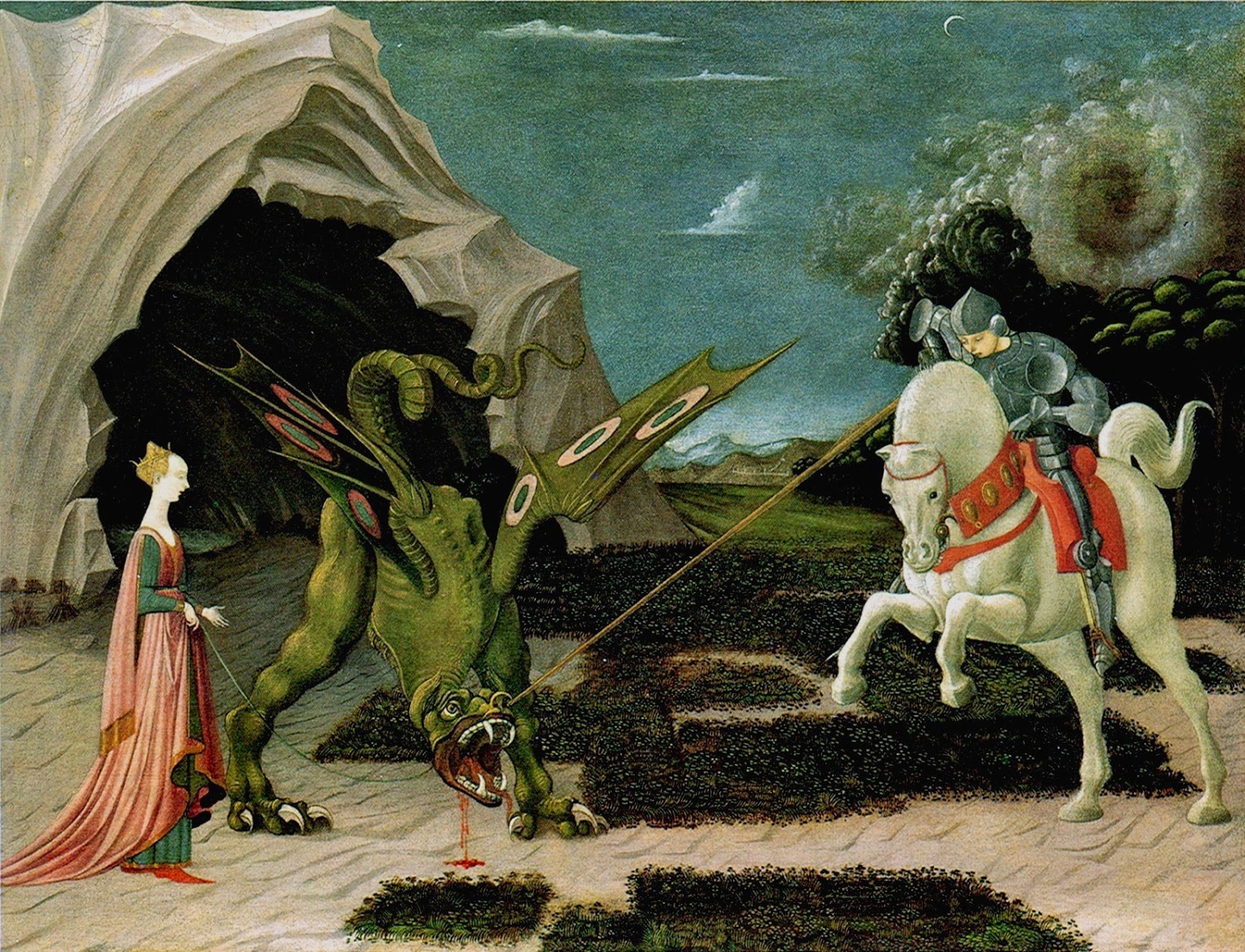 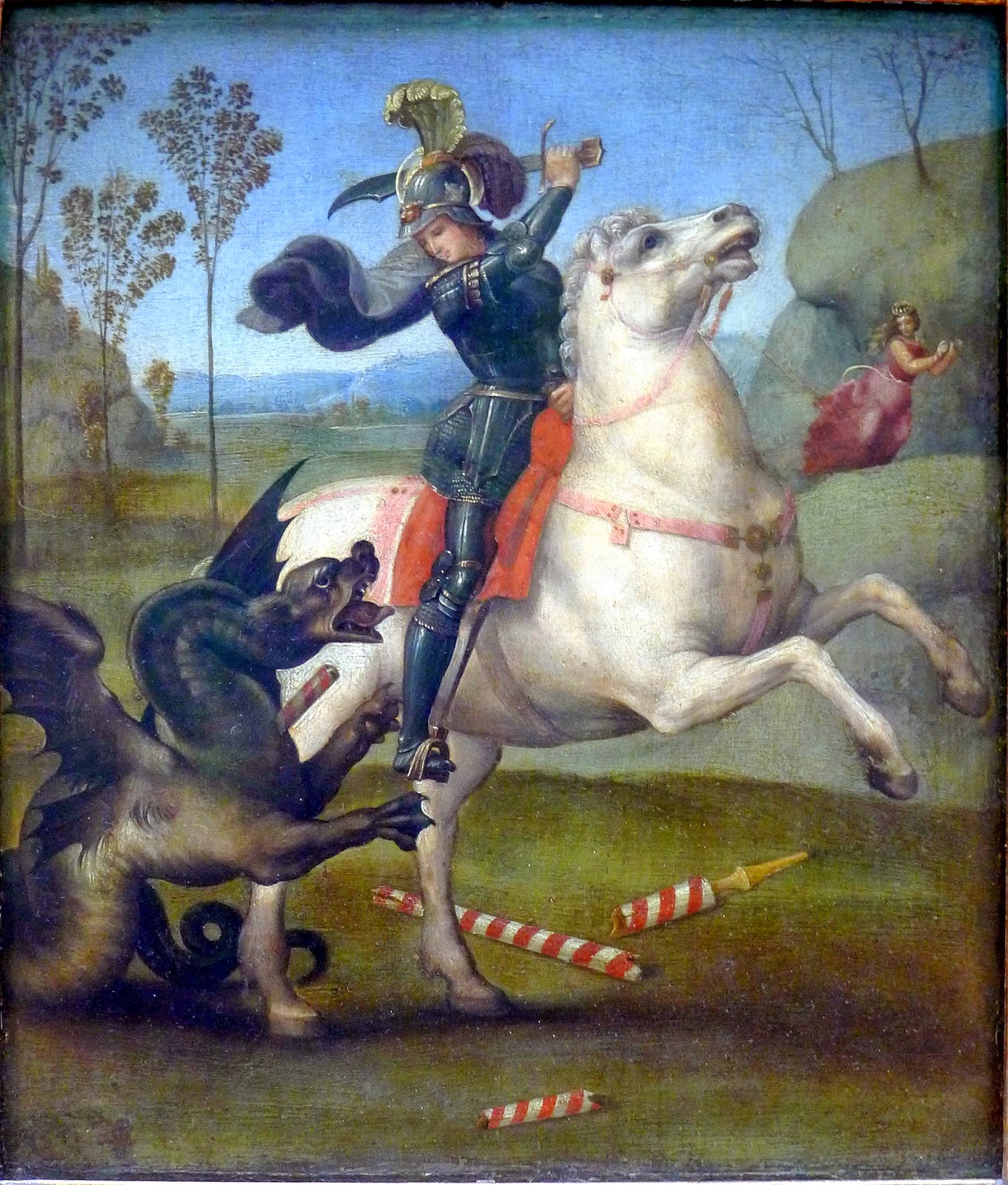 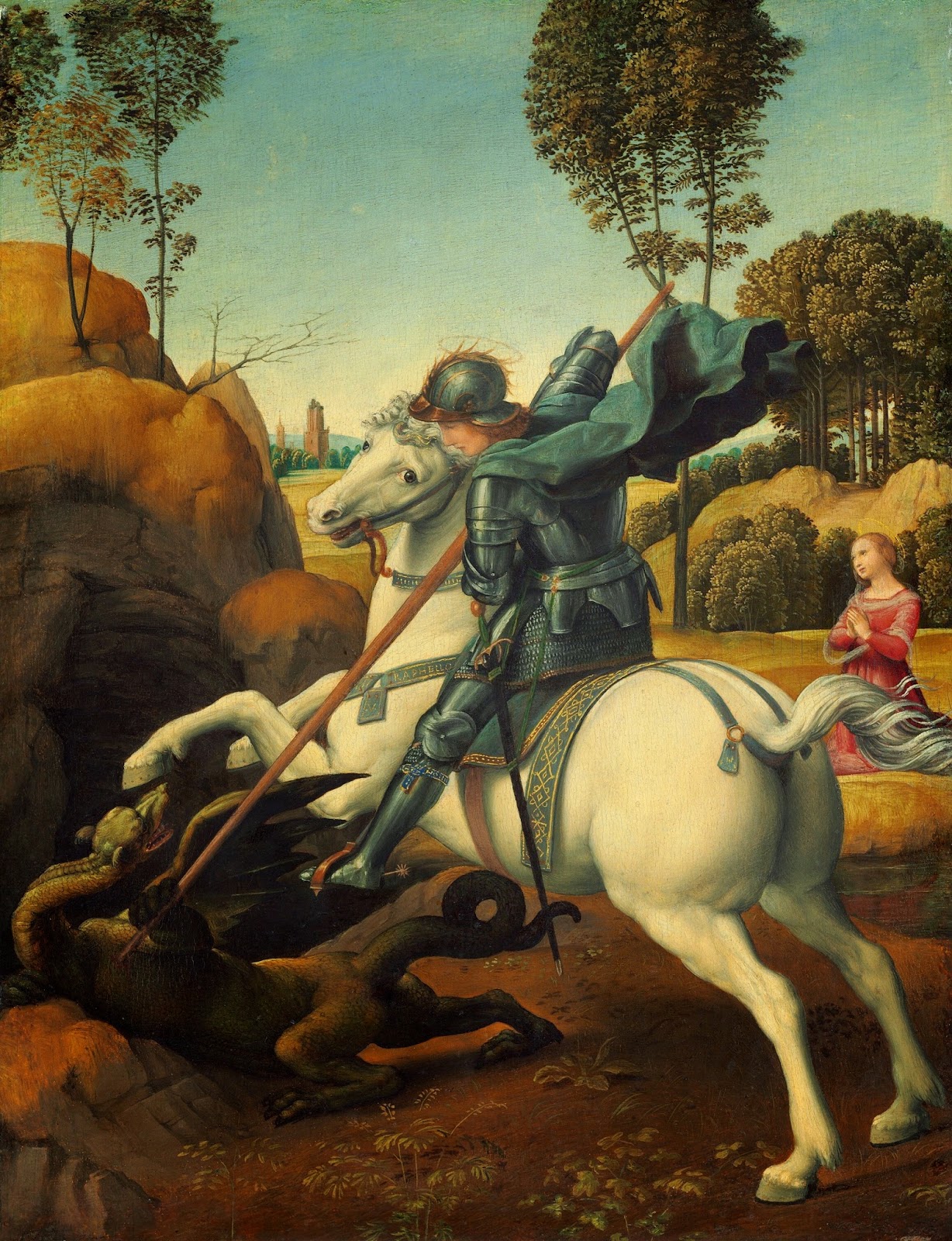 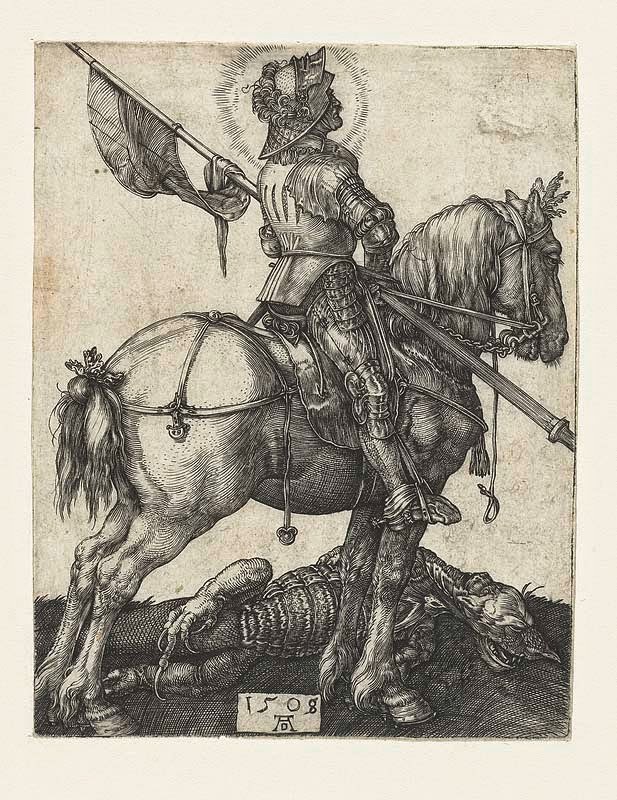 These images, apart from their message and attachment to the story of Saint George and the dragon, offer us a glimpse into the world of the Medieval knight and his steed. Each painting offers something akin to a gold mine, for us to study and ponder.
By the way , the XV century monument to Saint George from Prague Castle, standing in front of the Saint Vitus Cathedral. 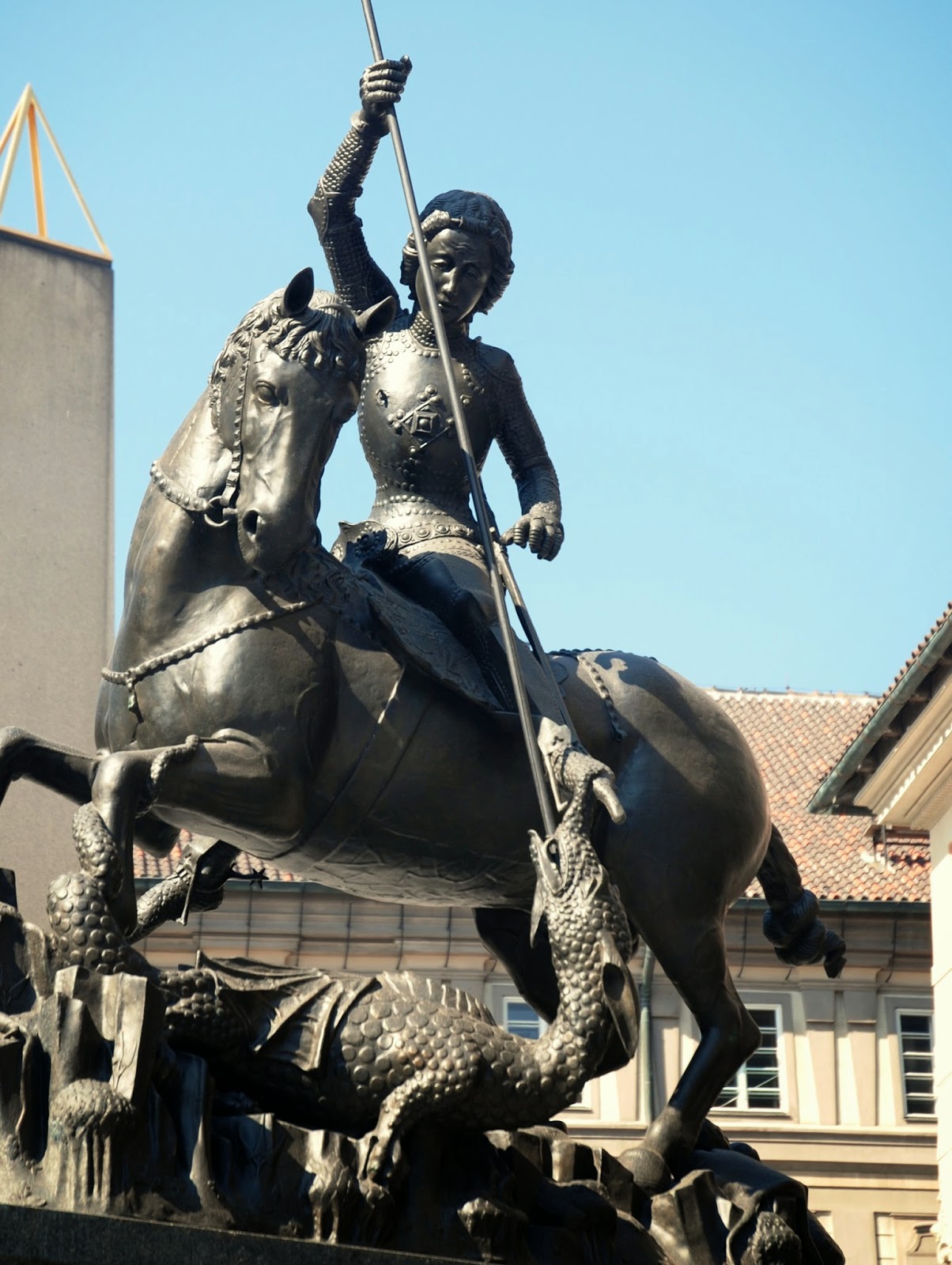 Ps
Since we Poles have a special relationship with our Wawel dragon, hence a small watercolour of Saint George painted by Juliusz Kossak, one of my  favourite Polish painters 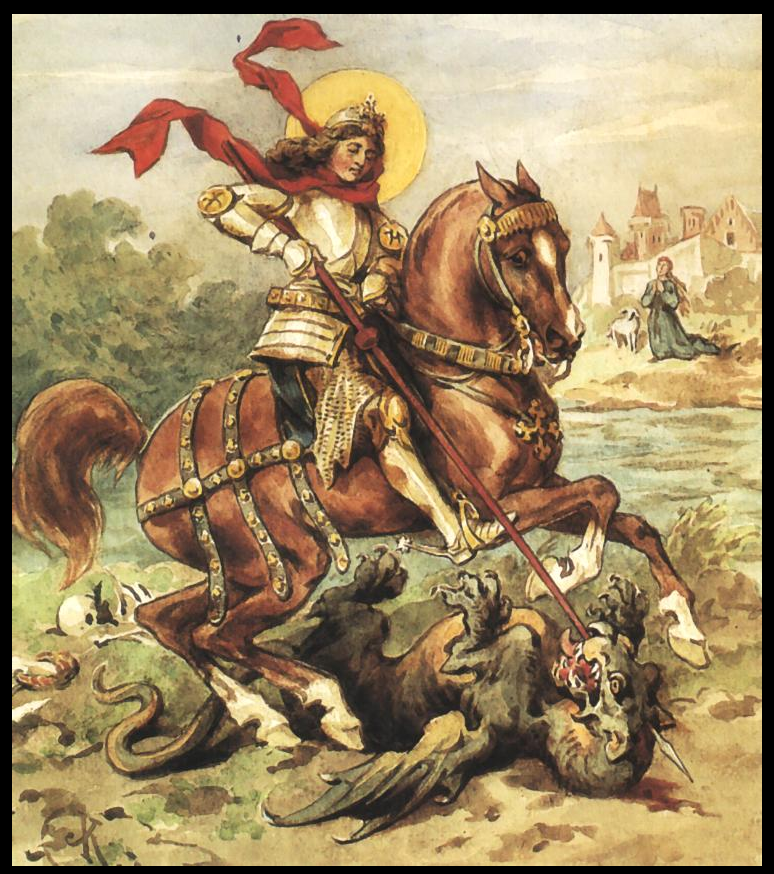 Bonanaza of articles - horse in the ancient Baltics

Salve,
very interesting collection of articles on horse domestication, horse in the ancient and medieval warfare and rites, horse related belief and everyday life within the cultural milieu of the Baltic Region. It is perhaps worth noting that the Klaipeda University Institute of Baltic History and Archaeology offers free download of many volumes of the Baltics studies, so do peruse if you are interested prehistoric and ancient Baltics.

The Horse and Man in European Antiquity

enjoy
ps
I have been listening to a novel  by Donna Leon, American writer from Venice, Italy, and while listening yesterday I sketched with a ball pen this quick sketch - mostly based in the old photo of a Nez Perce warrior Looking Glass or Allalimya Takanin

Nota bene in Poland there is a pretty active re-enactment movement reconstructing the history, belief and material culture of the Amerindians. The Polish Amerindian movement started mostly with Sat-Okh or Stanisław Supłatowicz, writer and a living legend. I visited a museum dedicated to his works and achievements last year while in Poland.
One ought to add that the Europeans, especially the Germans and French, have huge reenactment gatherings each year, reconstructing Amerindian culture and history. Indian Country Today wrote an article on the German interest in the Amerindians and their history, culture and traditions.
Ciao
Posted by Dario T. W. at Tuesday, April 22, 2014 No comments:

Salve,
I like the so called Northern Renaissance art so in the spirit of Easter let me share with you the beautiful painting by Dieric Bouts aptly titled 'Resurrection' 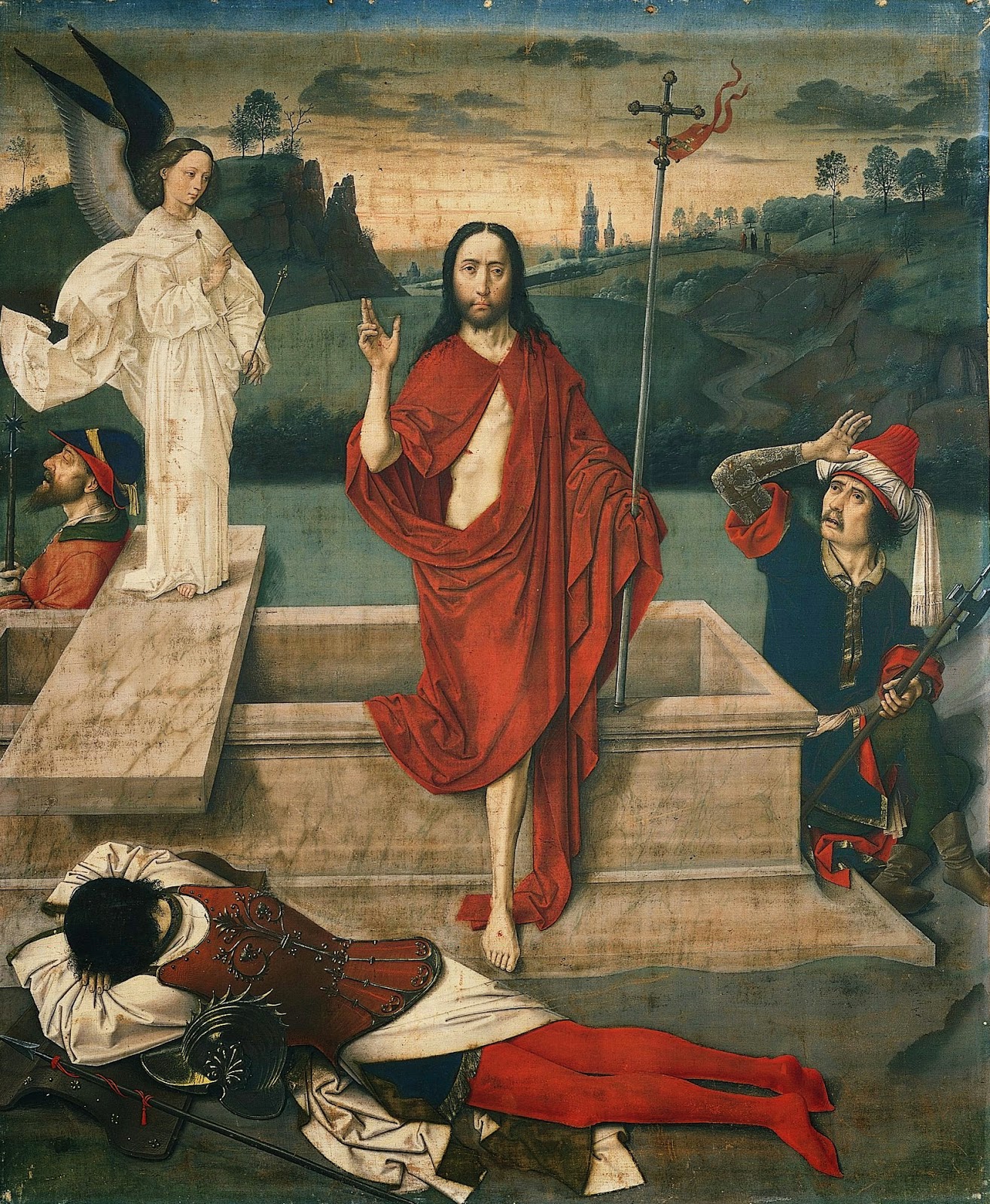 Salve
Good Saturday - so a few concept sketches from my stables 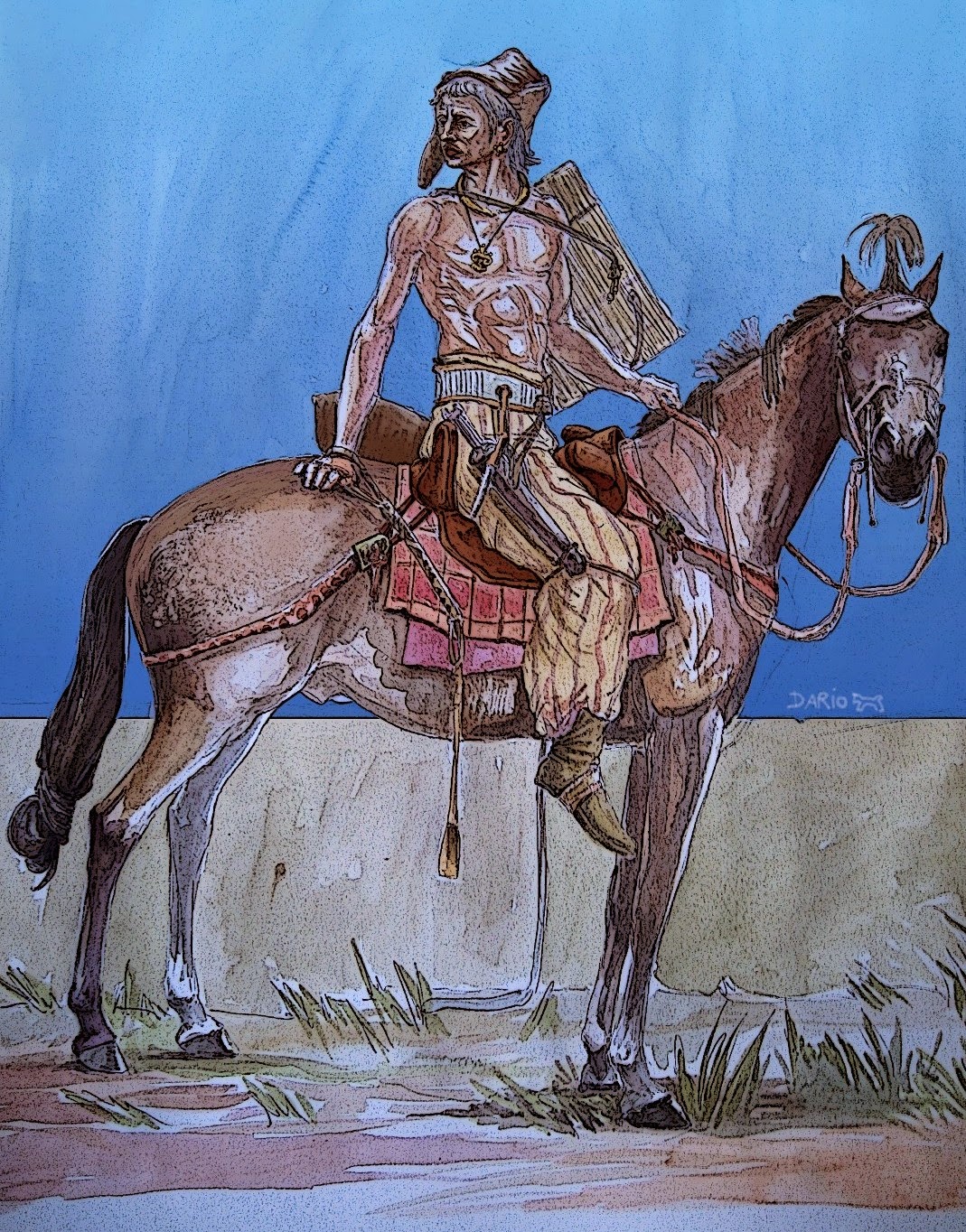 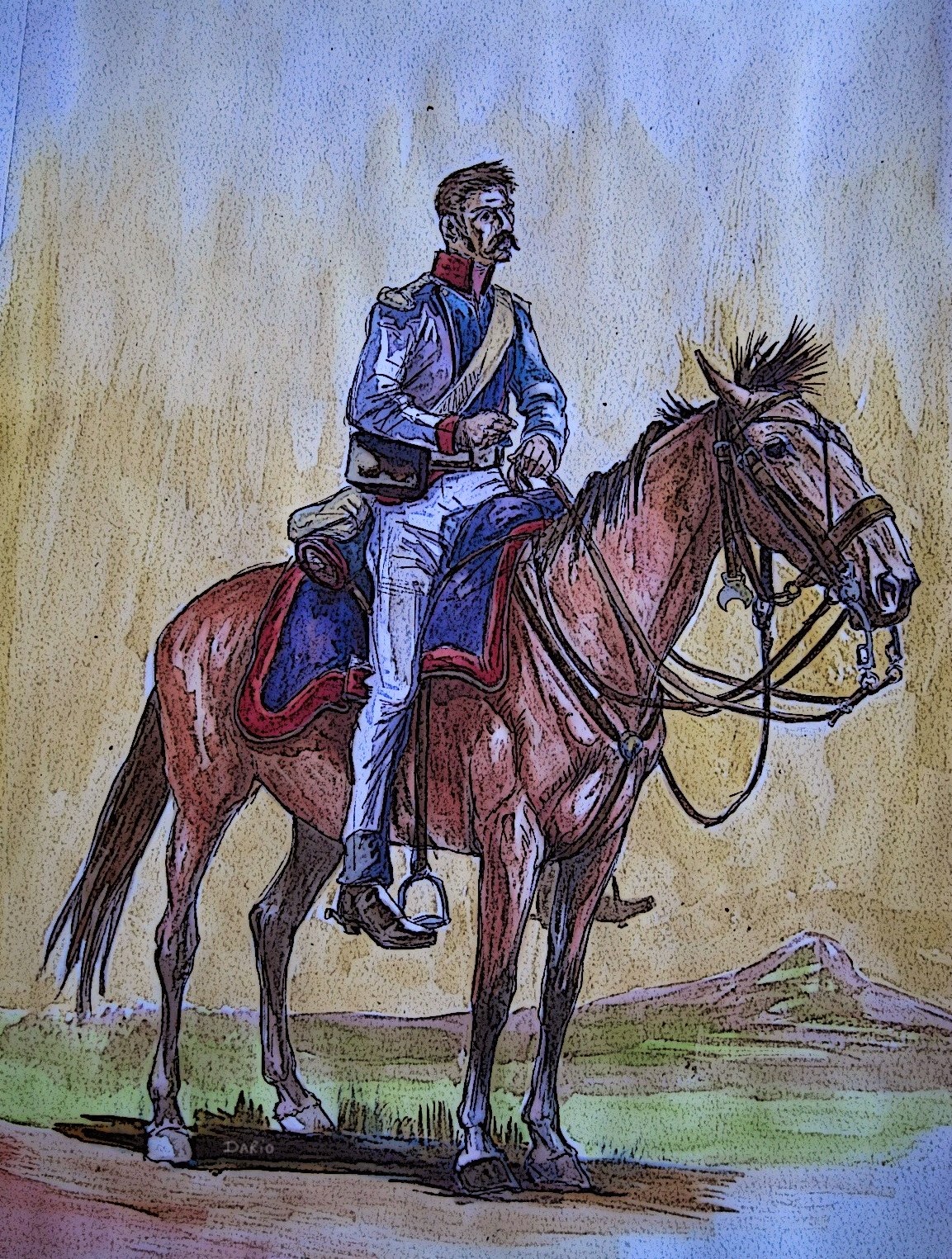 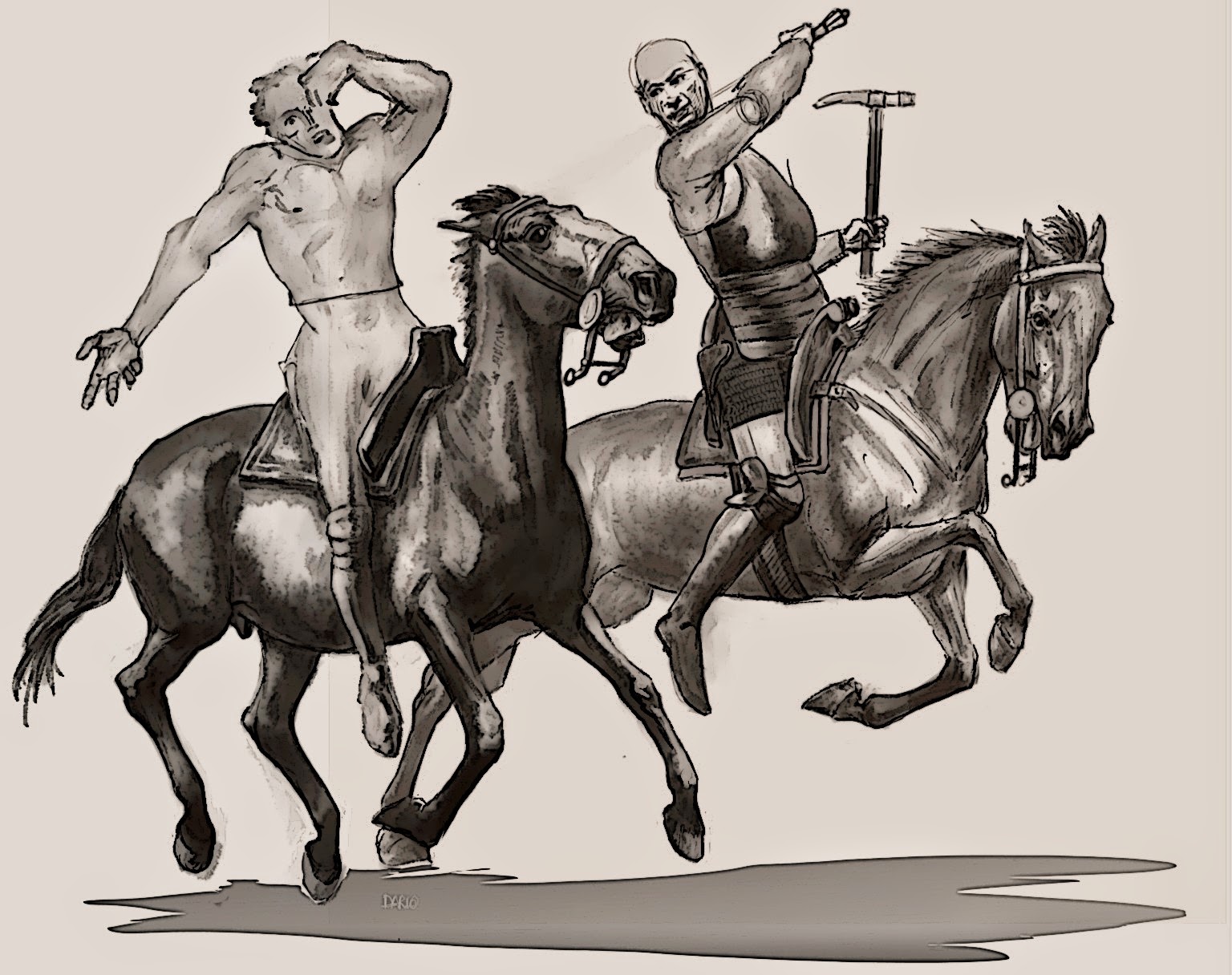 Salve,
some ideas for 'pisanki' straight from ethnographic notebooks copied from the original peasant designs by Polish XIX century pre-eminent ethnographers and folklorists- nota bene there is still time to paint some eggs 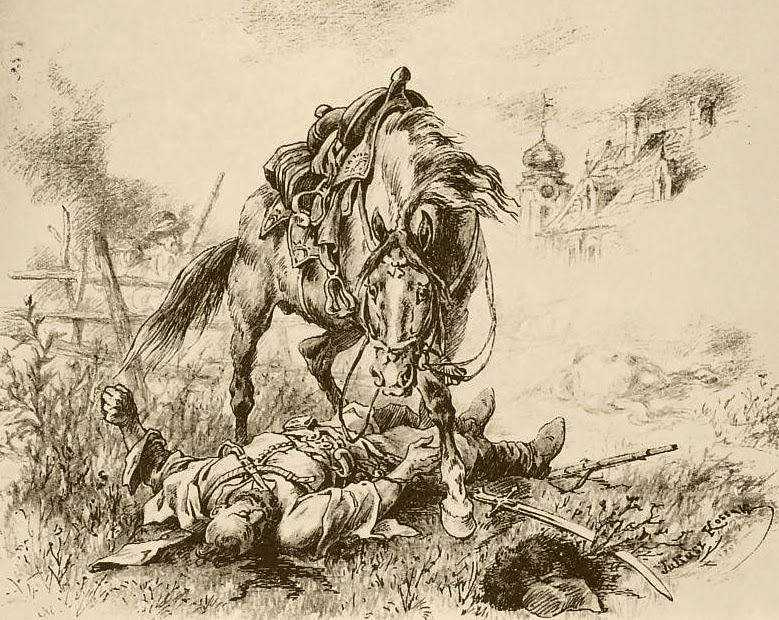 Salve,
today is the Good Thursday (part of Holy Week) ,  so couple more days and we will paint pisanki and celebrate Easter and Smigus Dyngus - :)
But keeping in rather sombre mood, I have been reading and thinking about the presently growing civil war in Ukraine, so inadvertently I started reading about the other civil war that turned into  Volhynia genocide and I came across a gem: the poetry of Zygmunt Jan Rumel - Polish poet and soldier in Polish Ruthenia who was cruelly murdered by the UPA (УПА), along with his two soldiers, when came to negotiate with them the fate of Poles of Volhynia.
Sadly, present day Ukrainian leaders and elites have not been willing to admit  the genocide of Polish families perpetrated by their grandfathers and grandmothers on their Polish neighbours and often family members, while the occupying German troops stood by.

Salve,
just a quick sketch - loosely based on the Persian (Parthian & Sassanian) iconography. Done with watercolour and ball pen, then the second one was  desaturated and worked over (the second image) with GIMP 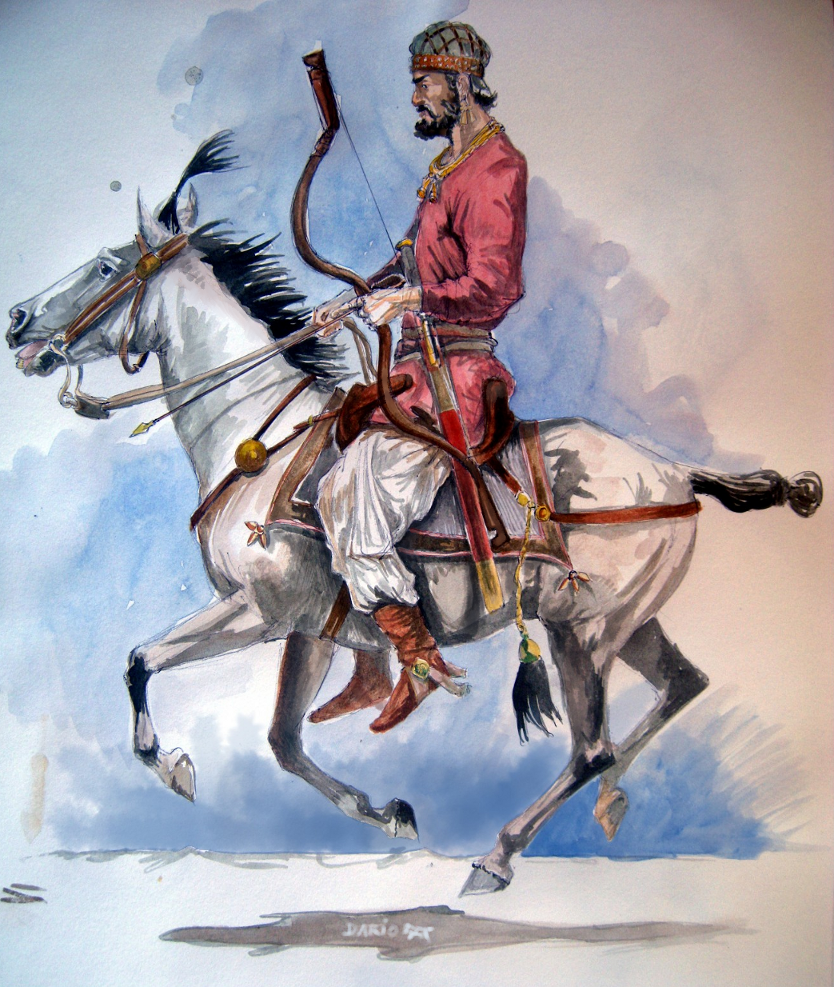 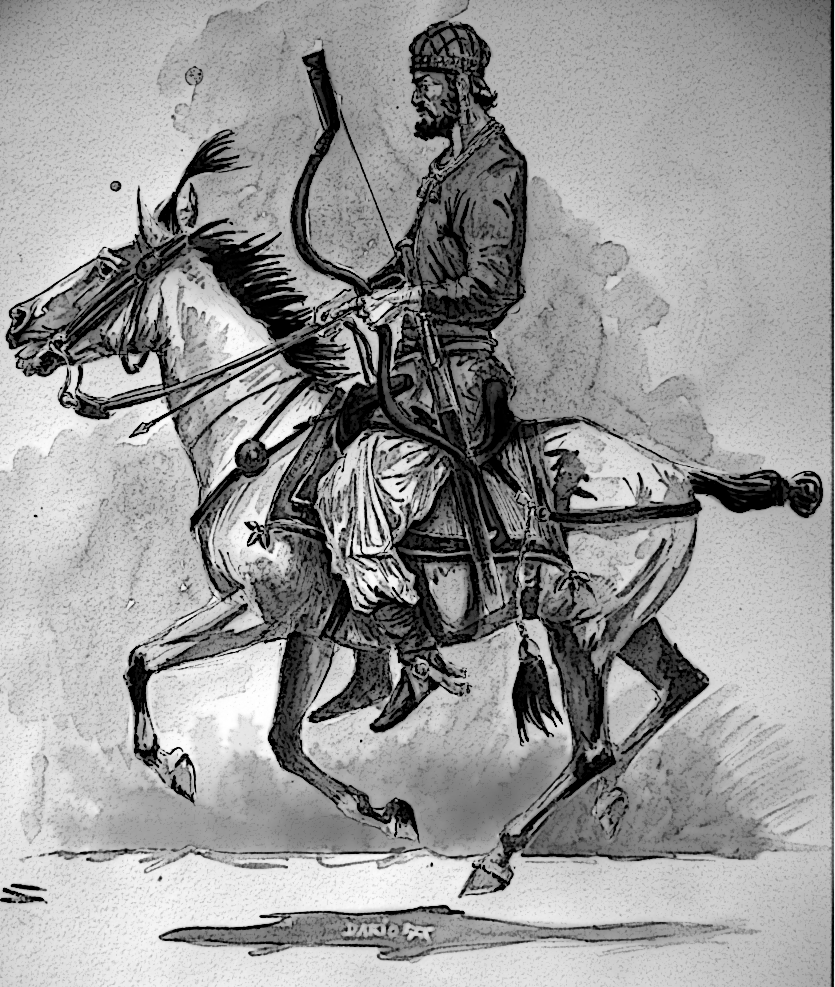 Salve,
I came across the website of master of martial arts and historical riding Arne Koets, and from there I found this documentary  - The Grand Tournament at St. Wendel - that I would like to share with you.

Sankt Wendel Tournament site
Program of tournaments in Europe, Canada, Australia, and US this year, via the Jousting Life
Interesting event this summer in Germany
Nice video from Denmark
Free lecture from  Dirk H. Breiding, Assitant Curator, Department of Arms and Armor, The Metropolitan Museum of Art (my most favourite museum in North America :) )on how to mount a horse in armour etc
Die grossen Ritterspiele zu Schaffhausen

Salve,
a while back I brought to your attention the works of Louis E.  Nolan.
In 1862 an American, Kenner Garrard (1828-1879), had a different version of Nolan's work published,  with new set of illustration plates(reflection US cavalry) and some more text, including Rarey's method of taming horses, and one on horse shoeing.
Mr Garrard was a Kentuckian by birth and a West Point graduate, who was a cavalry officer of the 2nd US Cavalry Regiment before the Civil War and fought the Amerindian raiders during the campaigns of the 1850s (almost died there bitten by a snake), and was part of the military command fighting the Kiowas and Comanches in Texas; then once the Civil War erupted he continued as a cavalry officer and commander in the Union Army, gloriously distinguished himself at Gettysburg and went on to lead various cavalry divisions, took part in the Atlanta campaign, amongst others being awarded for his gallantry on the filed of battle (Nashville 1864)
The text is available at archive.org
Below please find some of the 'American' plates 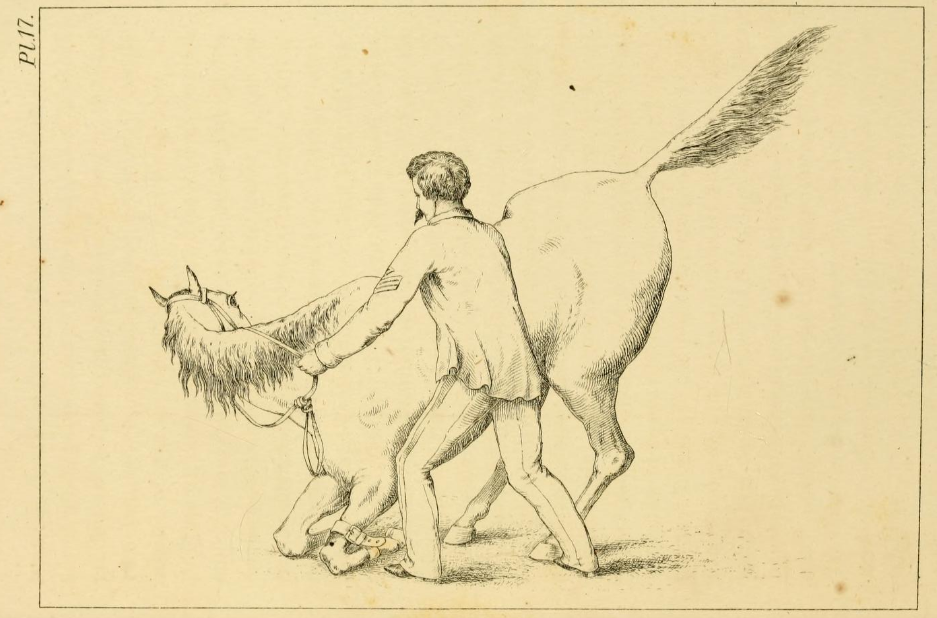