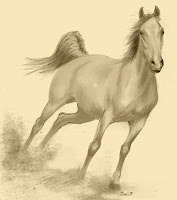 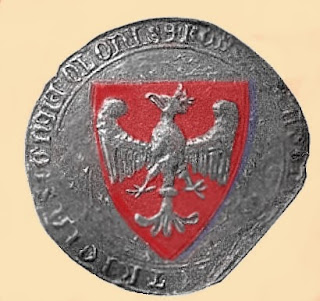 Salve,
summer upon us, and I have been travelling and found no way to post  anything; all right, perhaps it is the sun and rain duo that has been fiercely lashing us... and strawberries season, straight from the strawberry bushes :)
Ad rem, there is a very nice article at the Karagandy Oblast Museum website on the Saka;
and could not stop myself from copying the picture of the reconstructed Saka and his horse onto my blog. Obviously all copyrights to this image lay with the Museum etc

All of us who are interested in the history of horsemanship and horse tack, the reconstruction of the Saka King horse's bridle and reins should be most interesting , because it shows the third rein and its attachment (naturally leather, since the Saka were cattle herders and horse breeders and tanned leather as well as rawhide were most likely plentiful ). Also note the way the throatlatch is arranged in a similar fashion to the  the way we saw it portrayed in the Achaemenid stone reliefs of Persepolis Apadana - 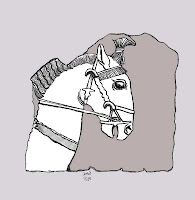 Also this photo shows a little bit of the saddle. Looking at the horse: it is a very fine specimen, similar to the tall ones discovered in the Saka Kurgans of Pazyryk in the Ukok Plateau, Altai Mountains, and portrayed in the felt carpet discovered by S. I. Rudenko's team  in the Pazyryk Kurgan. 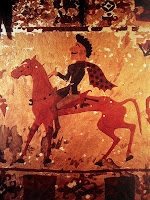 Hippotoxotai from Dura Europos' Mithraeum I

Salve,
I have this weakness for the eastern neighbours of the Greeks and Romans, the Persians, Medes and Sakas.
Well, for a long while I have been looking at the images from the Syrian desert found at the fortress city of Dura Europos, that was a frontier outpost under the Parthians and in  AD165  Dura was captured permanently by the Romans (note that emperor Trajan's army captured Dura during his Parthian campaign), who kept it for about a century until the fateful siege of AD 256.  Then the Sassanian warrior-king Shapur's forces captured the fortress and thus ended its history and because it was left as a ruined site then the sands of time covered the ruins and preserved its rich culture to our times, early XX century.
Interesting scholarly article on the siege's technical aspects, including the death of some Roman defenders and how it came about.
On a lighter side you could travel to Dura during the siege via some historical fiction eg British writer Harry Sidebottom wrote his series' first novel Fire in the East )Warrior of Rome)   about the siege of Dura Europos, although he changed the name of the fortress and some topography.
Also, you can get a glimpse of Dura art and culture from this short museum exhibit film
A student made mini-documentary

At Dura,  during the previous rulers and under the Roman governance, there were various temples and religious sites -  Roman, Greek, Palmyrene, Jewish and even a small Christian church and one of them was the Mitraeum - excellent site here - place of worship of Mithraism. There, during the excavations, several paintings were discovered, including a painting of Mithra on horseback, circa AD 200.
In that linear painting, Mithra, the hunter, is riding a horse, hence a horse archer -  hippotoxotai. He is painted wearing a standard Parthian costume (well, he is not wearing the typical Median coat or kantus, like the two personages at the Dura Synagogue are painted wearing. )

My own quick sketch of the original mural painting 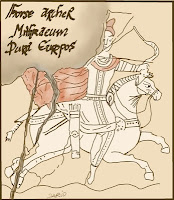 A sketch, in progress, of a warrior with his horse 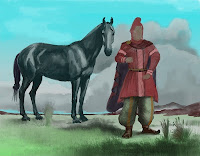 A horse - that will eventually carry the shooting hippotoxotai, just shooting at some wooden target etc. .. 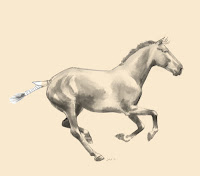 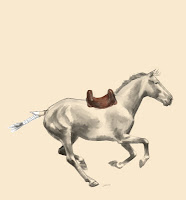 Salve amici and fellow travellers,
a quick sketch of a Scythian/Saka with a horse, somewhere on the  plains of Eurasian Steppe
...

...
Also, a sketch in progress, one abandoned a while back , and now I am going to work on it some more - these are Saka of the Altai's Ukok Plateau etc, 400-200 BC (after the Pazyryk finds etc) 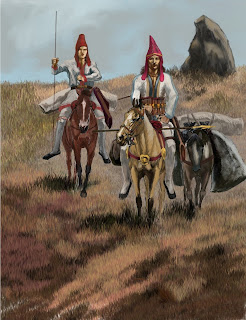