Salvete Omnes,
German Empire of the Holy German Empire was famous for many things in the XVI century, book publishing & print making being the most famous of all of them.
Costume Books were extremely popular, it seems, and some have been surviving in their full glory in the museums and library collections around Europe and other places.
One of these costume books is Habitus - produced by Hans Weigel from Nuremberg, then the 'mecca' of book and printmaking &  publishing in the Holy Empire and Christian Europe of XVI century.
French National Library on line or Gallica provides us the easy access to this magnificent volume.
Auriga or a German carraige, wagon, basterna or cart 'driver' - tough character dressed for the task which was to drive a wagon pulled by a team of hitched horses while seated in a saddle astride one of the cart horses.
He is armed with what appear to be a 'langes messer 'or a 'long knife' (kord in Polish).
His long, leggings like-boots (perhaps going back to the Eurasian Scythian long boots-trousers ) are of interest.
whether walking along his horse team/s or riding astride they were in need to protect themselves from the cold and rain, and in the age of scarce & sparse means and rather very few belongings they would protect their regular pants from the elements and their mounts sides (be it muddy or dusty etc), and thus such leather boots must have been of great help and protection. Rooster's(?)  feathers adorn his sturdy hat. 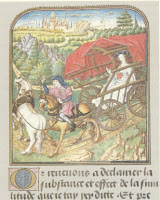 Holy Roman Empire - border town of Gorlitz/Zgorzelec - this is perhaps a freight wagon with a trader with his dog resting on top of his merchandise? 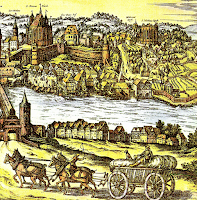 town  of Przemysl - Polish-Lithianian Commonwealth - driving what appears to be a 'kolaska' or light open carriage used by the gentry and well-to-do burghers for short trips to and from a town - be it church-going, shopping & business or sightseeing. 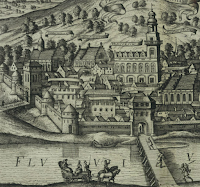 European military and nobility relied on use of wagons and horse-drawn carriages to move and carry persons, supplies, 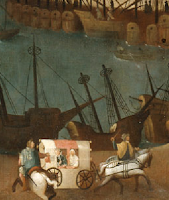 and thus wagon drivers were to be found in every army and entourage of the period in rather large numbers.

Salvete Omnes,
this January will be ending shortly
I have some links for you - via prof. Katarzyna Maksymiuk's page on academia.

- Crowns, hats, turbans and helmets The headgear in Iranian history volume I: Pre-Islamic Period
Edited by Katarzyna Maksymiuk & Gholamreza Karamian, Siedlce-Teheran 2017
excellent collection of scholarly articles, from the conference that took place at the University in the Fall of 2016

Salvete Omnes,
just three good morning images -  oil on canvas paintings by the preeminent British animalist Edwin Henry Landseer - beautiful Arabians, the pride of the Bedouins and noble stables in the XIX century Europe .
Nota bene Polish nobleman and scion of the Polish Borderlands family  Waclaw Rzewuski, Krzywda Coat of Arms,  made his famous and fabled first trip to the Bedouin tribal breeders in  1810s, on behalf of the Russian Tsar Alexander I and other royal patrons,  and brought back finest quality Arabians from the desert upon his return. Eventually he owned almost more than 80 Arabian blood mares, more than any other private breeder in Europe at that time. 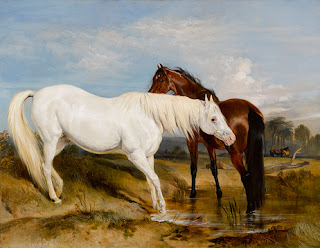 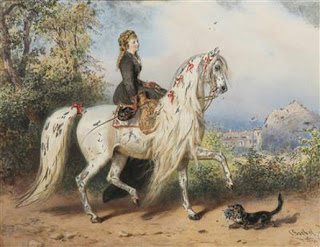 Carl Goebel - Viennese Austrian painter, watercolorist, who depicted genre scenes of the XIX century Europe, especially of the Austrian empire (remember that since 1849 it became Austria-Hungarian Empire).
Below it is Belgrade in the XIX century, true that there are very few horses visible, but the colorful scenery and human types are present, giving this capital of Serbia a very Near Eastern character (more than 400 years of the Ottoman domination would have done it).
I have been to Belgrade a few times, great city. 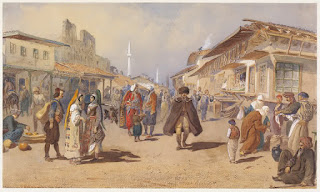 A peasant stable with a peasant horse and its working tack 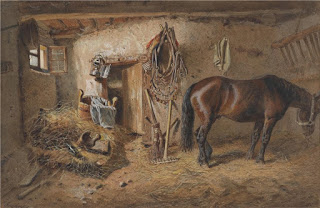 Carriage horses getting a break with a grey getting a new set of shoes
The nomads of XIX century Central and Eastern Europe - the Gypsy (today it is used more politically correct their own name  Roma or Romani , which is kind of strange, since e.g. in the English speaking world they use  names like Poles or Polish for the Polish people, instead of using our own name Polacy/Polki - :) , nota bene I love the old name they used for us - Polonians, just lovely) - one of their traditional occupations was trade in horses, but also the art of horse stealing and illicit trade across the international borders.
In the Polish legal history annals there are tons of stories about Gypsy banditry, thievery and mischief, but we also have a saying <kowal zawinil cygana powiesili> Blacksmith committed a crime but they hung the Gypsy; a little proverb about the scapegoat who was sacrificed for the sins of others . Nota bene love this saying by Mark Twain - There are many scapegoats for our sins, but the most popular is providence. 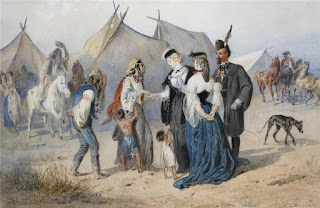 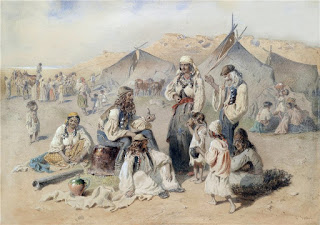 Sables with some Oriental looking horses 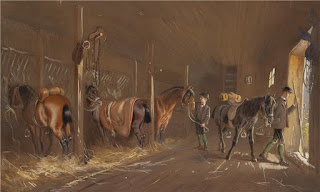 In Poland 'cyganska muzyka,'   Gypsy music and song, is popular, and some of the artists hold national acclaim and popularity.

and back to less exotic XIX century Europe, just this little delightful rendering of an Alpine water mill, with women doing laundry in the creek 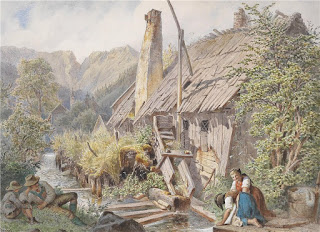 enjoy
ps
one of my most favorite films of all time - Табор уходит в небо or Gypsy wagon camp escapes to Heaven -   (release title in English is odd, isn't it? - Gypsies Are Found Near Heaven  )  it is about the Gypsy passion for horses, women, music (eg Евгений Дога - Яблоко (Табор Уходит В Небо) - look for it on youtube) and love.

Salvete Omnes,
Sunday morning and here we can enjoy some wonderful XIX century paintings where the horse is the very subject, sort of in the tradition of Carl Vernet and Theodore Gerricault . 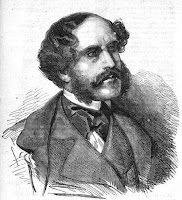 Master-painter, from Fra nce,  Alfred de Dreux's works are for the first time presented separately on my blog; sadly, the prolific author died in his prime, depraving the world of his talented brushwork.
So here we will look at some of his oli on canvas works showing Oriental, North African horses - be it Arabians or Barbs.
Below, clearly an Oriental bay stallion, with two grey stallions in the back of the pasture - European setting. 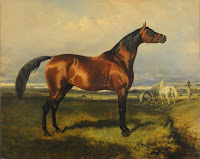 and two paintings that show the same Arabian? bay horse and his owner? groom? 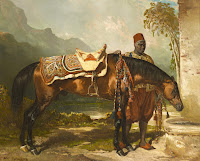 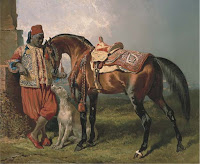 clearly the same horse and and this time clearly a groom in this painting, for it is titled Horses of Abd el Kader, and emir  Abd el Kader was the famous religious and military leader of the  Muslim resistance against the French invasion of Algeria in the first half of the XIX century.
So perhaps the black man in the other paintings is the groom of emir's horses. Presumably this Hassan was taken as a slave, perhaps in Sudan or Niger etc. Note that Abd el Kader was taken with the ruler of Egypt, famous Albanian Mamluk warrior Muhammad Ali, and perhaps this Algerian emir had some Egyptian Arabs in his stables, as the grey horse is clearly an Arabian stallion. 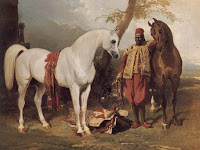 An African groon with a blood horse on the beach - Arabian or Barb steed. 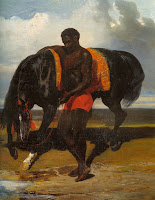 and a Sudanese groom  mounted on the white Arabian? stallion

Enjoy the beautiful brushowork of this talented Parisian artist.
Posted by Dario T. W. at Sunday, January 21, 2018 No comments:

Salvete Omnes,
ecuyer Arne Koets added a video of the famous Italian master of the European martial arts messer Fiore de Liberi and his Mounted Techniques (part I) on his youtube channel - in the past I linked Arne's videos to my blog. Presumably there will be more parts to come in the future.

study and enjoy
Valete
ps
Fiore at Gallica or the National Library of France
Posted by Dario T. W. at Friday, January 19, 2018 1 comment:

Salvete Omnes,
back to blogging from a little hiatus  - :)
Medieval manuscript painting, very beautiful as usual,  is back,

and we are back in the XIV century Les Grandes Chroniques de France,continuing from my  last post.
This time I am sharing with you more images of tack and riding technique - details of the page illuminations*

*each image has a title after its manuscript page number
Posted by Dario T. W. at Friday, January 19, 2018 No comments:

Salvete Omnes,
just a short entry this early morning:
Jean le Bon (John II, king of France) when he was the Duke of Normandy (1332-1350) commissioned a manuscript that became part of  Les Grandes Chroniques de France, today the codex is  kept at the British Library - Royal MS 16 G VI - information here, viewing on line here,
Within the wiki commons collection there are several larger photos of the illuminations from this codex showing riding horses of the period, these are palfreys or pacing horses of the nobility. 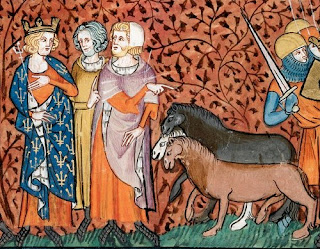 I will be returning to these manuscripts from time to time, I hope.
Valete

ps
nota bene - there is this petition to save the wild horses and burros from removal and slaughter in the US; as the Bundys have been cleared (dura lex sed lex - the Bundy affair - Cliven Bundy speaking here - have been monitored by the environmental groups eg here , the voice on the wild horse & cattle grazing from 2014), so this is the matter of the America public lands (managed by BLM, US Corps of Engineers, US Department of Defense, Forrest Service etc), rights of ranchers and citizens, taxpayers' subsidized  cattle (cow and sheep ) grazing on public lands (fees have been lowered), and the fate of  constitutionally protected (Idaho LawReview article) Wild Horse and Burro in the American West.
also a rather hostile to wild horses article from the Smithsonian
Posted by Dario T. W. at Tuesday, January 09, 2018 3 comments:

Happy Epiphany or the Magi have arrived

Salvete Omnes,
and so we have arrived at the end of the Journey of the Magi, and today we have the Feast of Epiphany.
For this occasion I selected this illumination from an East Anglian codex titled Carrow Psalter presently held at the Walters Art Museum in Baltimore, USA.
It was created during the mid-century and is very important in many ways, including the depiction showing the murder and martyrdom of Saint Thomas Becket by 4 knights (with their retainers) of king Henry II of England inside the Canterbury Cathedral.
The Magi are shown riding at the flying gallop (?), or with the front and hind horses' legs extended as in a jump, a traditional way to show fastest gait of the horse before the XIX century. They are following the Bethlehem Star with their gifts shown a bit in right hand, while guiding their mounts with the left, or at lest the two Magi are doing this.
The mounts are presumably stallions as their sex is shown, and again are grey, just the middle one is shown to be a steel grey for the sake of contrast I presume.
The monk painting this illumination created flying tails which is perhaps another indication of the fast speed.
Horses have multicolored tack, their bridles have no curb-bit but what appear to be a snaffle and a single set of reins. Perhaps they are riding in full collection, as their heads are elevated etc. The bridle has no throatlatch but a browband.
The saddle of the front Magi has black color covering the saddle skirts and shabraque or just longish skirts, extending and tapering to the back, and light brown high arches, typical of the period saddles.
Whether the saddle skirts were in fact this long or painted & dyed black, or dyed some other color we will not know, but the single cinch is also typical, note its width and the criss-cross pattern on it most likely indicating that it was made out of  woven fabric.


There is also a typical for the period breast collar strap, simple and without any additional adornments

The foremost Magi is riding with his legs fully extended forward, feet in stirrups and spurs indicated,
Adoration of the Magi - detail from the illumination 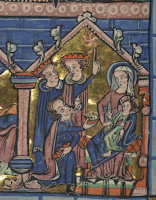