DNA studies of the Ancient Aegyptians

Salvete omnes,
when I was studying at the university I had to read the already very controversial book title Black Athena - it was a required reading and studding its content was like reading the Soviet or Gender Communist works: convoluted, often contrary to reason and fishing for evidence, finally bending it all to the ideological thesis presented by its author.

So finally there is some respite from the racist nonsense of Mr. Berbal and his ilk,  these are newest DNA studies of the material taken from the ancient Egyptians mummies -

An international team of scientists, led by researchers from the University of Tuebingen and the Max Planck Institute for the Science of Human History in Jena, successfully recovered and analyzed ancient DNA from Egyptian mummies dating from approximately 1400 BCE to 400 CE [New Kingdom to Roman Period], including the first genome-wide nuclear data from three individuals, establishing ancient Egyptian mummies as a reliable source for genetic material to study the ancient past.

The study found that ancient Egyptians were most closely related to ancient populations in the Levant, and were also closely related to Neolithic populations from the Anatolian Peninsula and Europe. "The genetics of the Abusir el-Meleq community did not undergo any major shifts during the 1,300 year timespan we studied, suggesting that the population remained genetically relatively unaffected by foreign conquest and rule," says Wolfgang Haak, group leader at the Max Planck Institute for the Science of Human History in Jena.


so they belonged to the Western Asian and European stock... 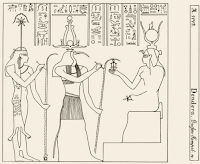 http://www.britishmuseum.org/pdf/Kobusiewicz.pdf Neolithic pastoralist from the Egypt western Desert (near the Sudanese border)

https://www.realmofhistory.com/2017/06/20/reconstruction-nebiri-ancient-egypt-dignitary/
''the reconstruction of Nebiri, an Ancient Egyptian dignitary who lived during the time of the 18th dynasty, corresponding to the reign of Pharaoh Thutmoses III (1479–1425 BC)''

Very nice info, thanks for all the things you have done :-)

Hello Unknown, you are very welcome - :)