Salve,
eagle feathers are forever the symbols of American Indian warriors, especially the feather bonnets of the Plains warriors. I finished reading an essay, published as bilingual book English-German, by Colin F. Taylor Wapa'ha. ''The Plains Feathered Head-dress, Die Plains-Federhaube'' (1994), a short but succinct analysis of the history, type and ceremonialism of the feathered bonnets of the Northern Plains warriors during the per-reservation period. Inspired by the book I decided to cite here some XIX century information on the golden eagle , then called calumet eagle, the principal source of the feathers for the warriors. 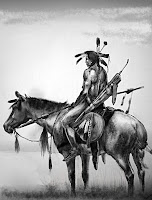 I will start with George Catlin, who is the most prolific of all the observers, for he drew and wrote down his observations... 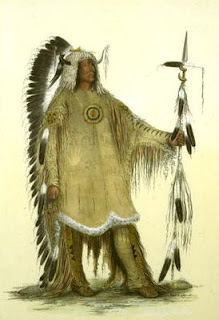 George Catlin (circa 1832) on eagle feathers (when visiting the Mandan Indians on the Upper Missouri)
[...]''and a part of our labours were vainly spent in the pursuit of a war-eagle. This noble bird is the one which the Indians in these regions, value so highly for their tail feathers, which are used as the most valued plumes for decorating the heads and dresses of the warriors. It is a beautiful bird, and, the Indians tell me, conquers all other varieties of eagles in the country; from which circumstance, the Indians respect the bird, and hold it in the highest esteem, and value its quills. I am unable to say to what variety it belongs; but I am sure it is not to be seen in any of our museums ; nor is it to be found in America (I think), until one gets near to the base of the Rocky Mountains. This bird has often been called the calumet eagle and war-eagle; the last of which appellations I have already accounted for; and the other has arisen from the fact, that the Indians almost invariably ornament their calumets or pipes of peace with its quills. 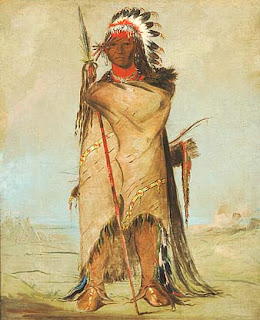 Some 30 years earlier US Government official explorers Lewis and Clark noted: The Calumet eagle sometimes inhabits this side of the Rocky Mountains. . [.. . ] descends to the plains only in the fall and winter seasons. The natives are at this season on the watch, and so highly is this plumage prized by the Mandans, the Minnetarees [Hidatsa], and the Ricaras [Arikara], that the tail feathers of two of these eagles will be purchased by the exchange of a good horse or gun, and such accoutrements. Amongst the great and little Osages, and those nations inhabiting the countries where the bird is more rarely seen, the price is even double of that above mentioned. With these feathers the natives decorate the stems of their sacred pipes or calumets, from whence the name of the calumet eagle is derived. The Ricaras have domesticated this bird in many instances, for the purpose of obtaining its plumage. The natives on every part of the continent, who can procure the feathers, attach them to their own hair, and the manes and tails of their favorite horses, by way of ornament. They also decorate their war caps' or bonnets with these feathers.

Circa 1831 nature encyclopedia on British America (''Zoology of the northern parts of British America'' by Sir John Richardson, William Swainson, William Kirby) described this bird in relation to the native inhabitants of the Great Plains and provides an anecdote too : ..it is held by the aborigines of America, as it is by almost every other people, to be an emblem of might and courage; and the young Indian warrior glories in his eagle plume as the most honourable ornament with which he can adorn himself. Its feathers are attached to the calumets, or smoking pipes, used by the Indians in the celebration of their solemn festivals, which has obtained for it the name of the Calumet Eagle. Indeed, so highly are these ornaments prized, that a warrior will often exchange a valuable horse for the tail feathers of a single eagle* (from Lewis and Clark). The strength of vision of this bird must almost exceed conception, for it can discover its prey and pounce upon it from a height at which it is itself, with its expanded wings, scarcely visible to the human eye. When looking for its prey, it sails in large circles, with its tail spread out, but with little motion of its wings; and it often soars aloft in a spiral manner, its gyrations becoming gradually less and less perceptible, until it dwindles to a mere speck, and is at length entirely lost to the view. A story is current, on the plains of the Saskatchewan, of a half-breed Indian, who was vaunting his prowess before a band of his countrymen, and wishing to impress them with a belief of his supernatural powers. In the midst of his harangue an Eagle was observed suspended as it were in the air directly over his head, upon which, pointing aloft with his dagger, which glistened brightly in the sun, he called upon the royal bird to come down. To his own amazement, no less than to the consternation of the surrounding Indians, the Eagle seemed to obey the charm, for instantly, shooting down with the velocity of an arrow, it impaled itself on the point of his weapon! 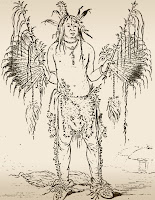