Salve,
while visiting Römisch-Germanisches Zentralmuseum (RGZM) in the ancient city of Moguntiacum aka Mainz I came across this interesting Sassanian plate, allegedly from VI-VII century AD, and an example of the Sassanian metal art  - frankly I have never seen one like that before I think 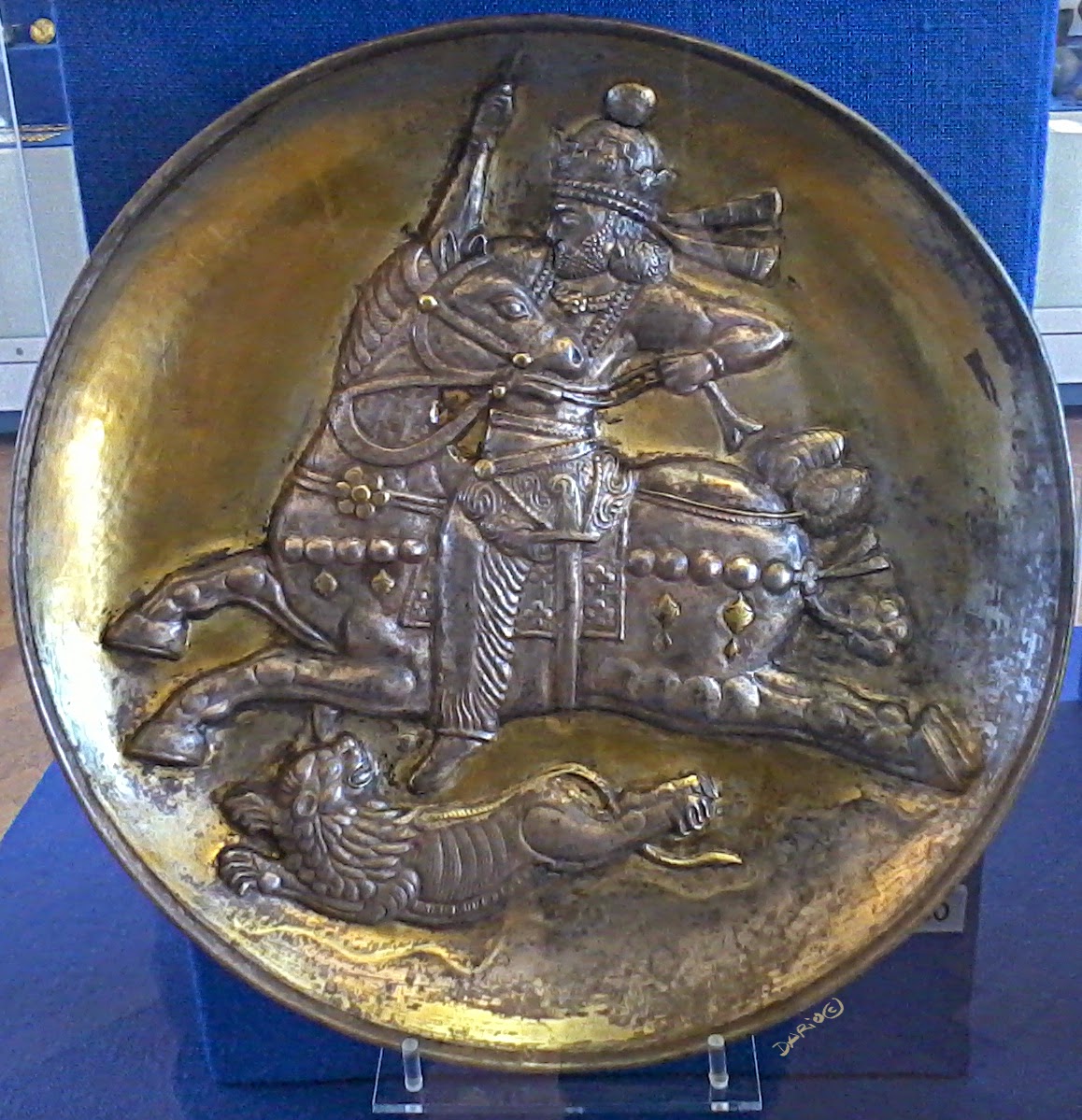 Any ideas?
enjoy
ps
nota bene the Mainz museum has some amazing artifacts from the Late Antiquity and early Middle Ages, a true gem and its is free to enter...
Posted by Dario T. W. at Tuesday, April 21, 2015 5 comments:

Salve,
I happily blog about horses and their riders in history and art, mostly about my corner of the woods, the pre-XX century Central Europe and Polish-Lithuanian Commonwealth in particular.

However, from time to time I will add something about the current events or ideas, naturally dear to me, like the fate of the American wild horse aka mustang, or Polish modern history, or the Holocaust and German 'new history.'

So, when I read an article by not a small player in world's law enforcement and thus someone perceived possessing higher education  and rather high ethical and moral standards (including absence of lying and falsehoods), namely FBI director James Comey, at the Washington Post page, I was flabbergasted and insulted.
This top-official of Obama administration said in his text:
''In their minds, the murderers and accomplices of Germany, and Poland, and Hungary, and so many, many other places didn’t do something evil. They convinced themselves it was the right thing to do, the thing they had to do. That’s what people do. And that should truly frighten us''[ Washington Post ]
President Obama himself is not a stranger to this calumny - as evidenced in his speech in 2012.

Diplomatic intervention was needed and US ambassador was summoned in Warsaw responding with apology to Comey's mishmash of lies, but nothing beats a piece written by brave Anne Applebaum who had stepped in and had her short piece published responding to the Nazi-invented myth of Germany and her mythical Polish and Hungarian accomplices - a fragment:
There are a number of problems with that pair of weak sentences, starting with the vast difference between Germany and the rest. During the war, Germany had a state policy of exterminating the Jews. This policy involved not “accomplices” but hundreds of bureaucrats, tens of thousands of soldiers, train schedules and plans. Germany also encouraged the creation of collaborationist governments in other countries – Vichy France, for example – some of which used their own police officers to send their Jewish citizens into the German death camps.
Germany also occupied Poland, but there was no Polish “Vichy.” During the war, there was no Polish state at all. Indeed, it was the absence of the Polish state that enabled the Germans to create a lawless, violent world, one in which anyone could be arbitrarily murdered, any Jew could be deported — and any Pole who helped a Jew could be shot instantly, along with his entire family. Many were. Millions of others died too – Polish intellectuals, priests and politicians were all Nazi targets.
In the course of the war, most of Poland’s infrastructure, industry and architecture were destroyed. In that atmosphere, many people were frightened by or indifferent to the fate of the Jews, and some murdered in order to avoid being murdered. But that doesn’t mean that “in their minds” they “didn’t do something evil.[...]
If the FBI director wants to take some lessons from Washington’s excellent Holocaust museum, that’s very admirable. But first he should make sure he’s understood what he’s seen”

Why I say Nazi-invented, well Reinhard Gehlen, German Nazi intelligence officer who after the Germany's defeat was taken prisoner and was working for the Americans leading the so called Gehlen Organization, and then since 1956 had been the director of the German Federal Intelligence Service,  i.e., a true spy-master,  employed former Nazis as his staff and as agents eg Klaus Barbie, Konrad Fiebig and Walter Kurreck etc. Amongst other tasks, these semi-secret agencies were working hard to dispel the negative image of post-Nazi Germany in Europe and the rest of the world. (good Polish article on the subject) .
One of these German intelligence officers and also a former Nazi Alfred Benzinger, accidentally :)  a chief  of Agency 114, is credited with the invention (probably with his good officers) of the term 'Polish Concentration Camps.'
The rest is history and our, Polish people (wherever we might reside), continuous nightmare... especially in the US, eg in the past I wrote to and called NY dailies like NY Times, NY Post and NY Daily News protesting their use of the term Polish Death Camps etc.

Therefore I am happy that Ms. Applebaum wrote her piece...

By the way let us not forget that between 1939 (August)-1941(June 22) Nazi Germany and Soviet Union were close allies, amongst other 'deeds' invading Poland, dividing the country and her peoples, and thus setting the stage for the Holocaust... 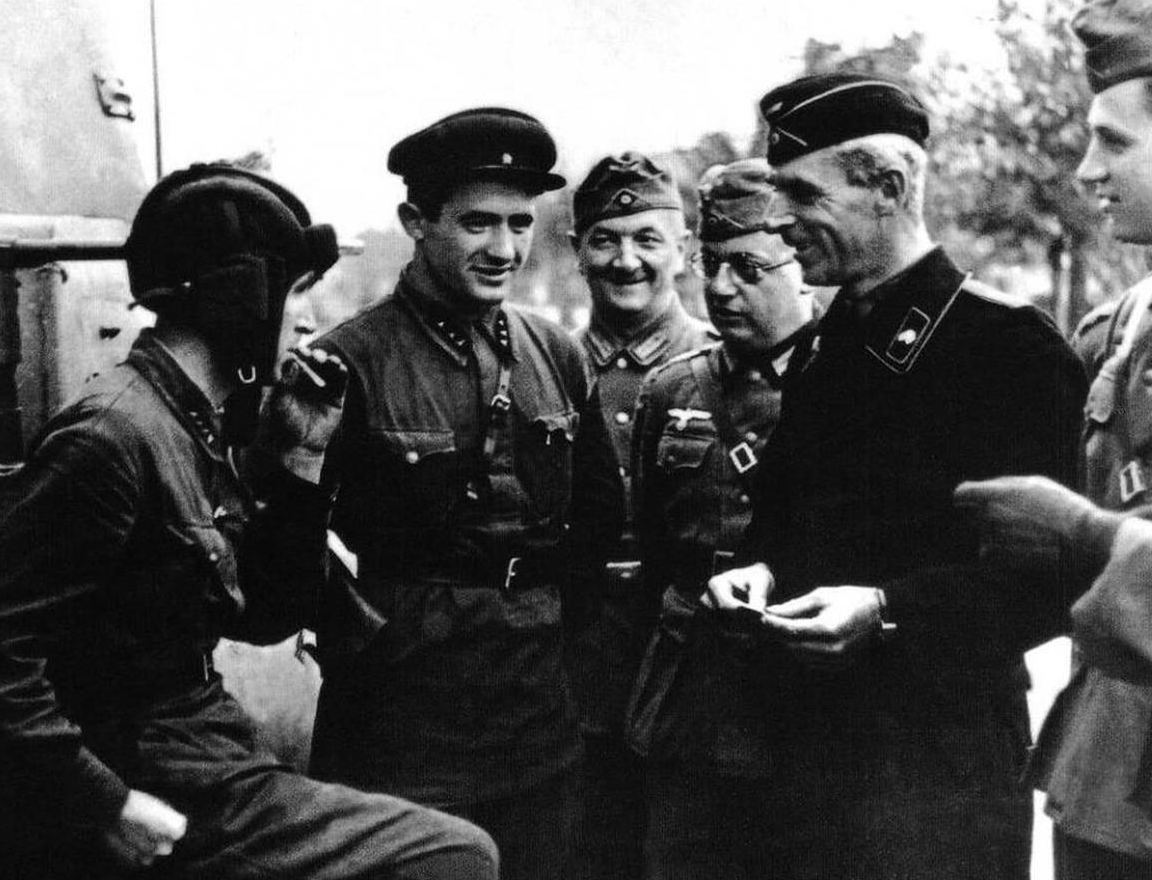 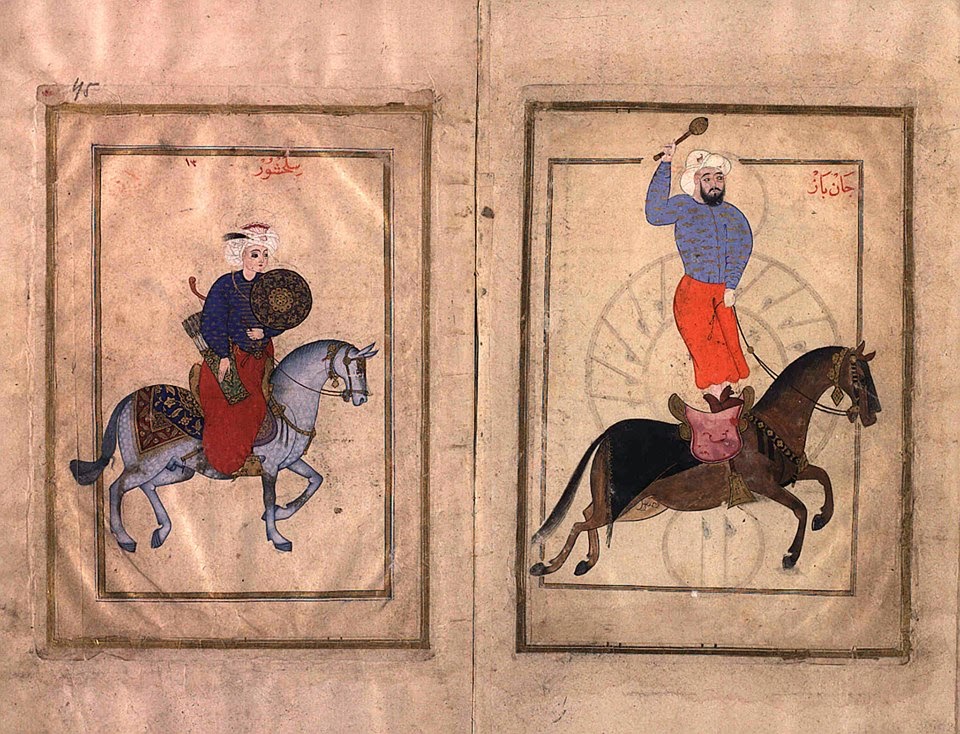 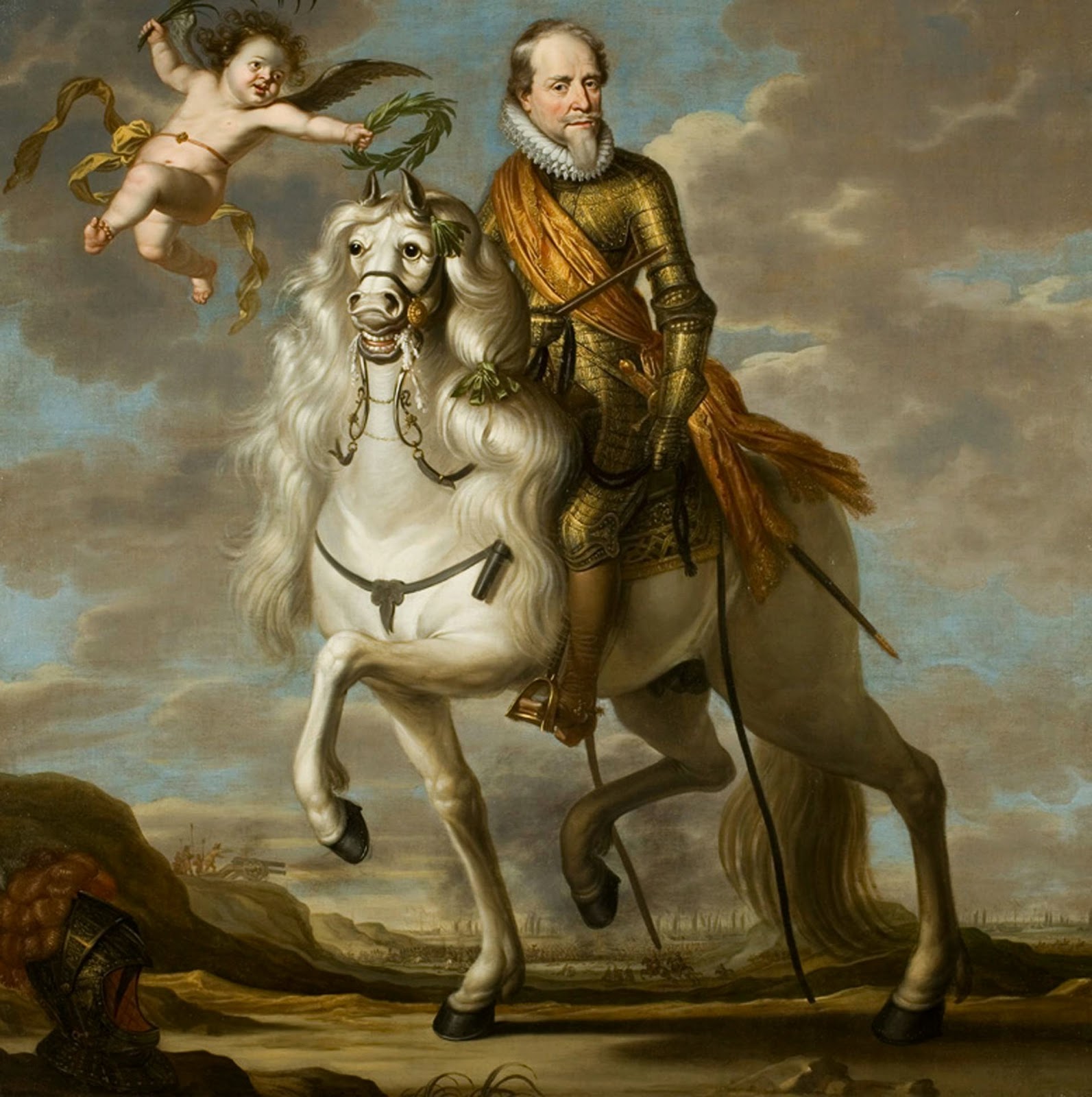 Salve,
I do like the images of Baroque horses preserved in so many Dutch paintings and engravings.
Many of those can be found on Wikipedia or museums' pages (eg here), freely accessible for us to view and study, or simply for our feast and enjoyment - :)
Now, mostly on Wikipedia Commons they have 'corralled' a number of paintings showing prince Maurits (Maurice) van Oranje and his war stallions, mostly grey Dutch and Spanish (jenet) horses.

So let's corral them here too :) 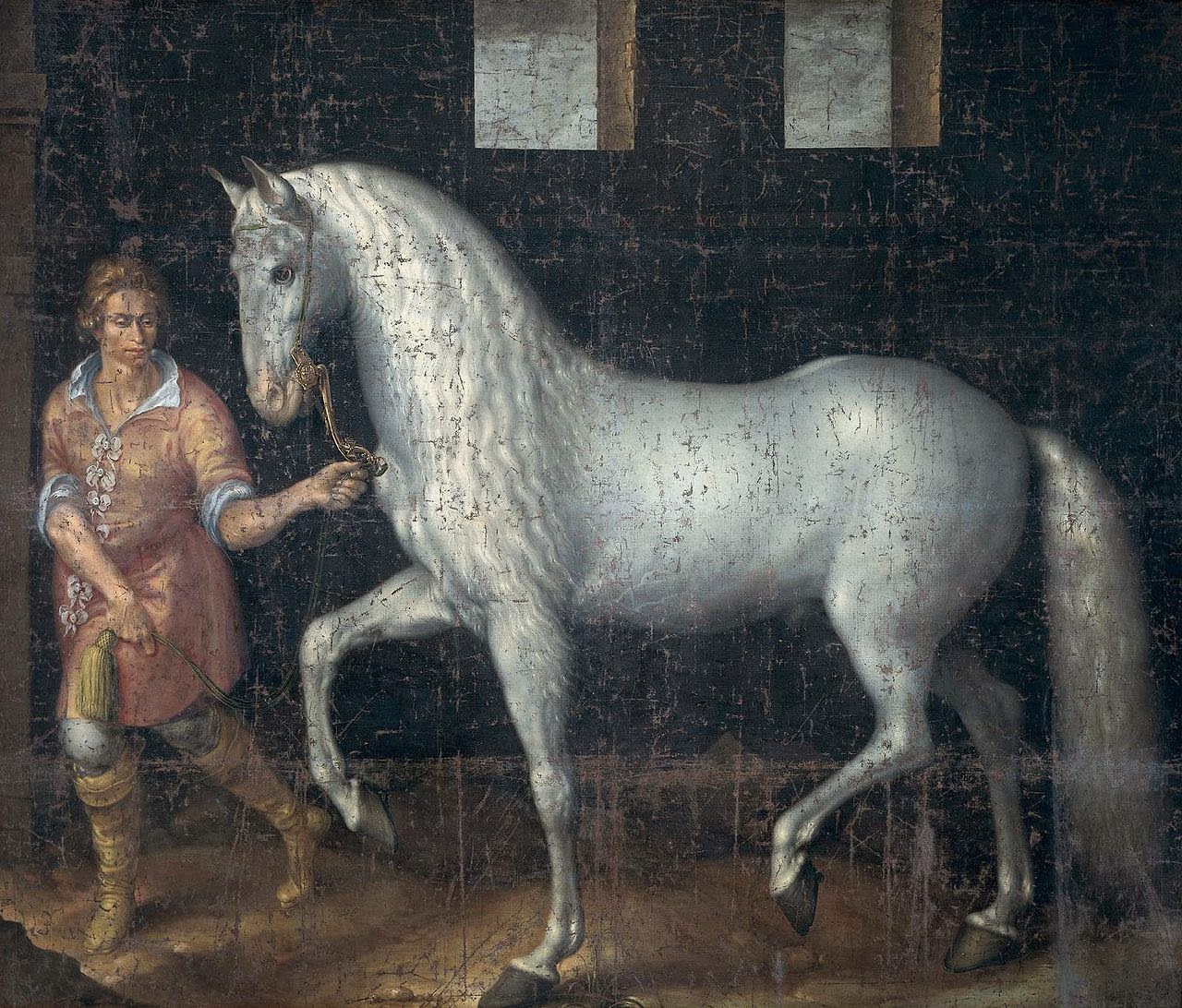 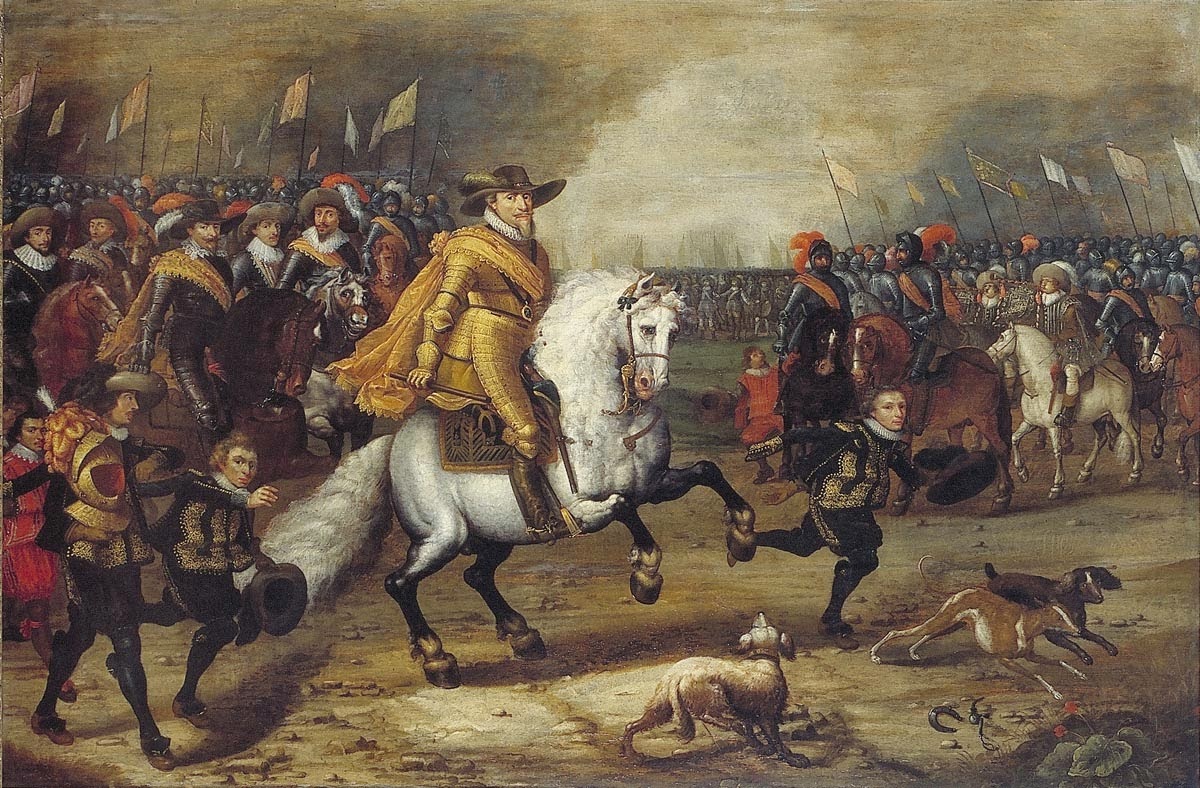 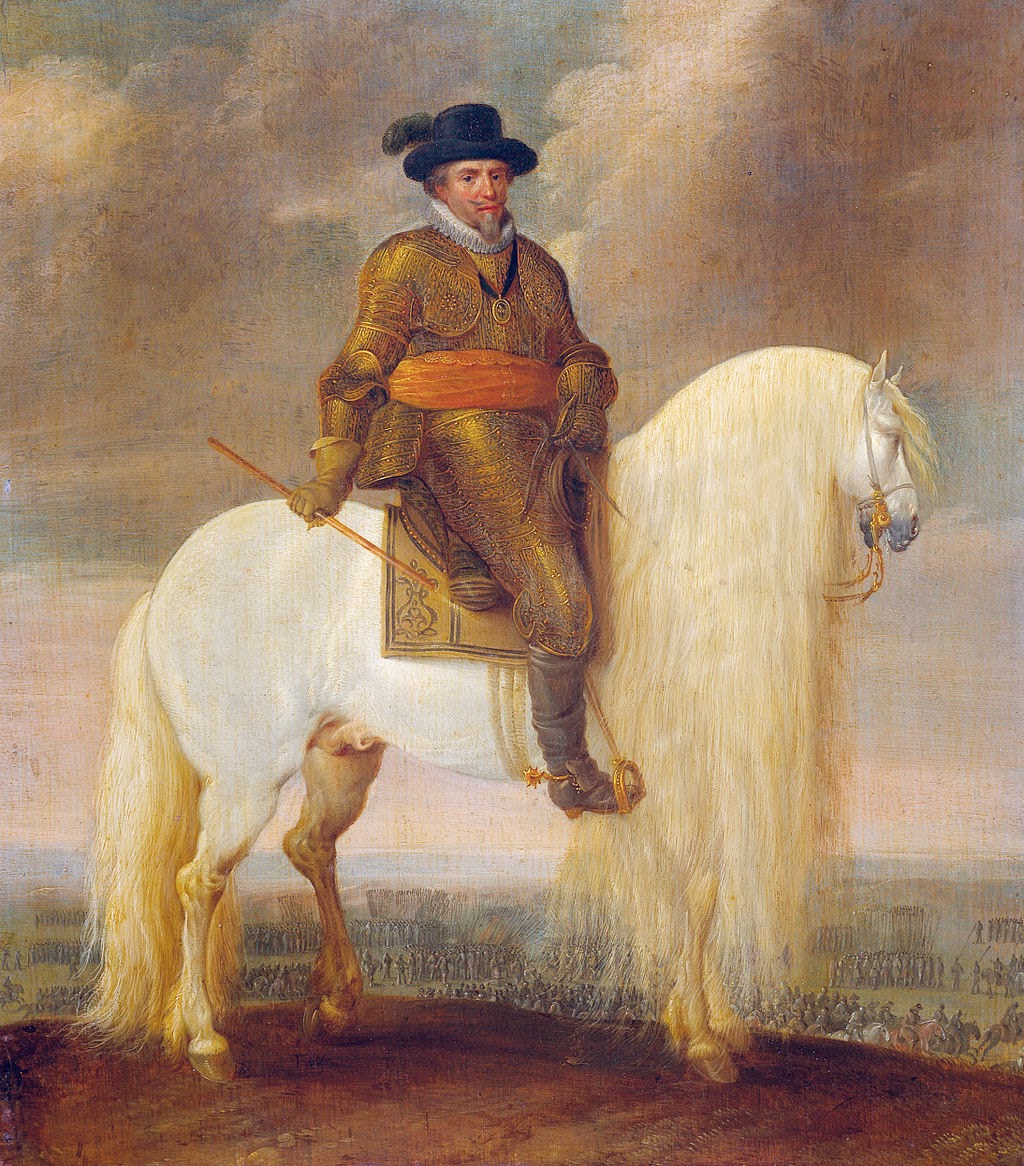 enjoy
ps
by the way, the type of  3/4 gilded armour prince Maurits is wearing could have been also worn by the Polish winged hussars and magnates, as seen in some funerary monuments and paintings. The Spanish hose was prized and sought after in Polish lands at that time, as evidenced in the surviving paintings and written accounts etc.

Salve,
I hope your enjoyed your Smigus Dyngus day :)

- :)
* * *
this year Easter Tournament at the Royal Armouries Museum at Leeds is over, but you can always train for the next one  -
before you do,  here  there is a clip showing jouster Jan Gradon, team Poland, striking another knight Ben van Koert, team Burgundy, ending in  'pan' Jan scoring a direct head strike while 'ser' Ben a shield one, and no injuries....
Greatly trained horses, I must add .. 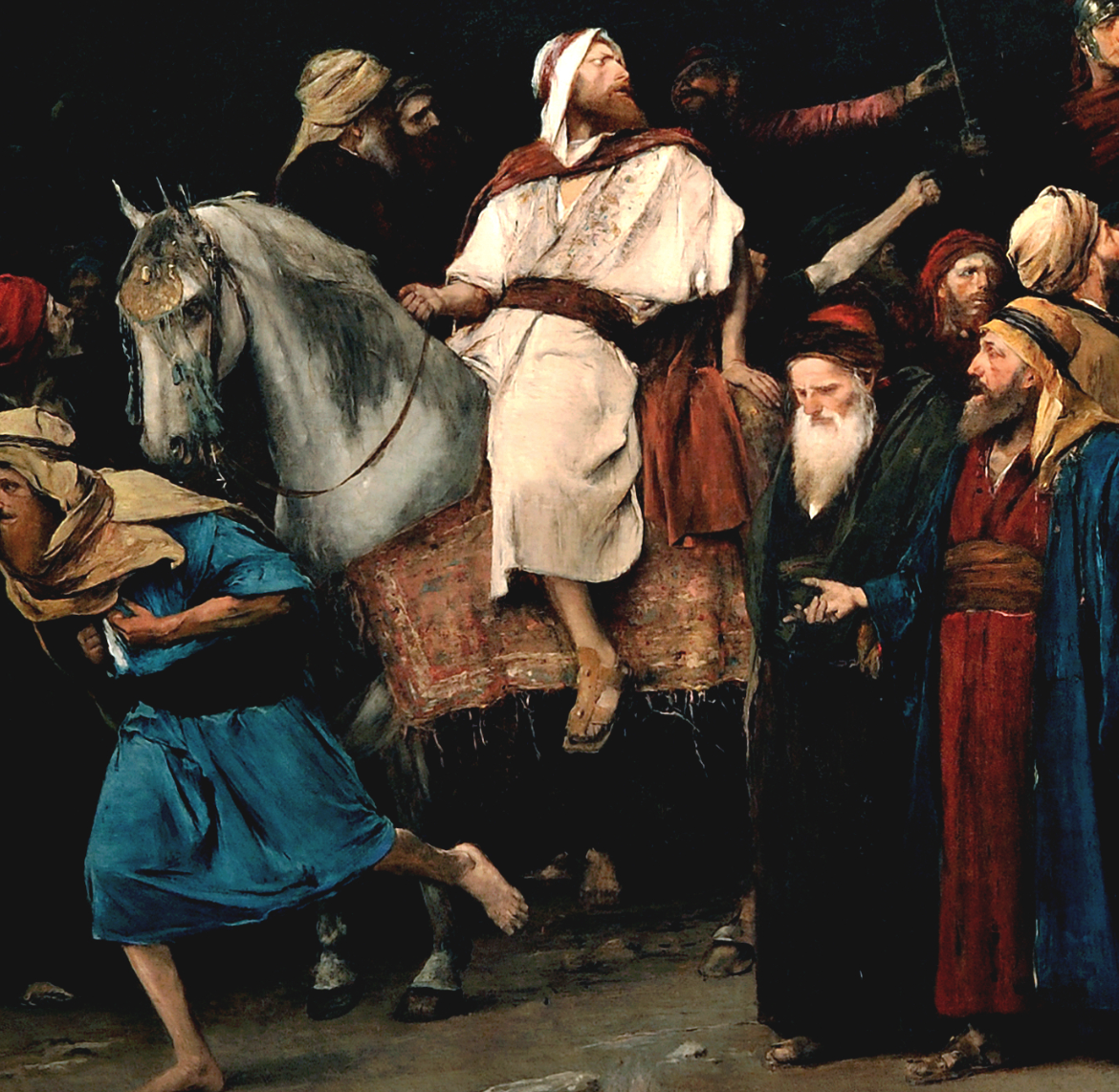 Salve,
quickly taking this opportunity to bring to you yet another aspect of Mihaly Munkascy's art - his genre paintings  and horses

historical painting showing the settling of Hungary by the Magyars

the end of the Great Eurasian Steppe or the Hungarian puszta 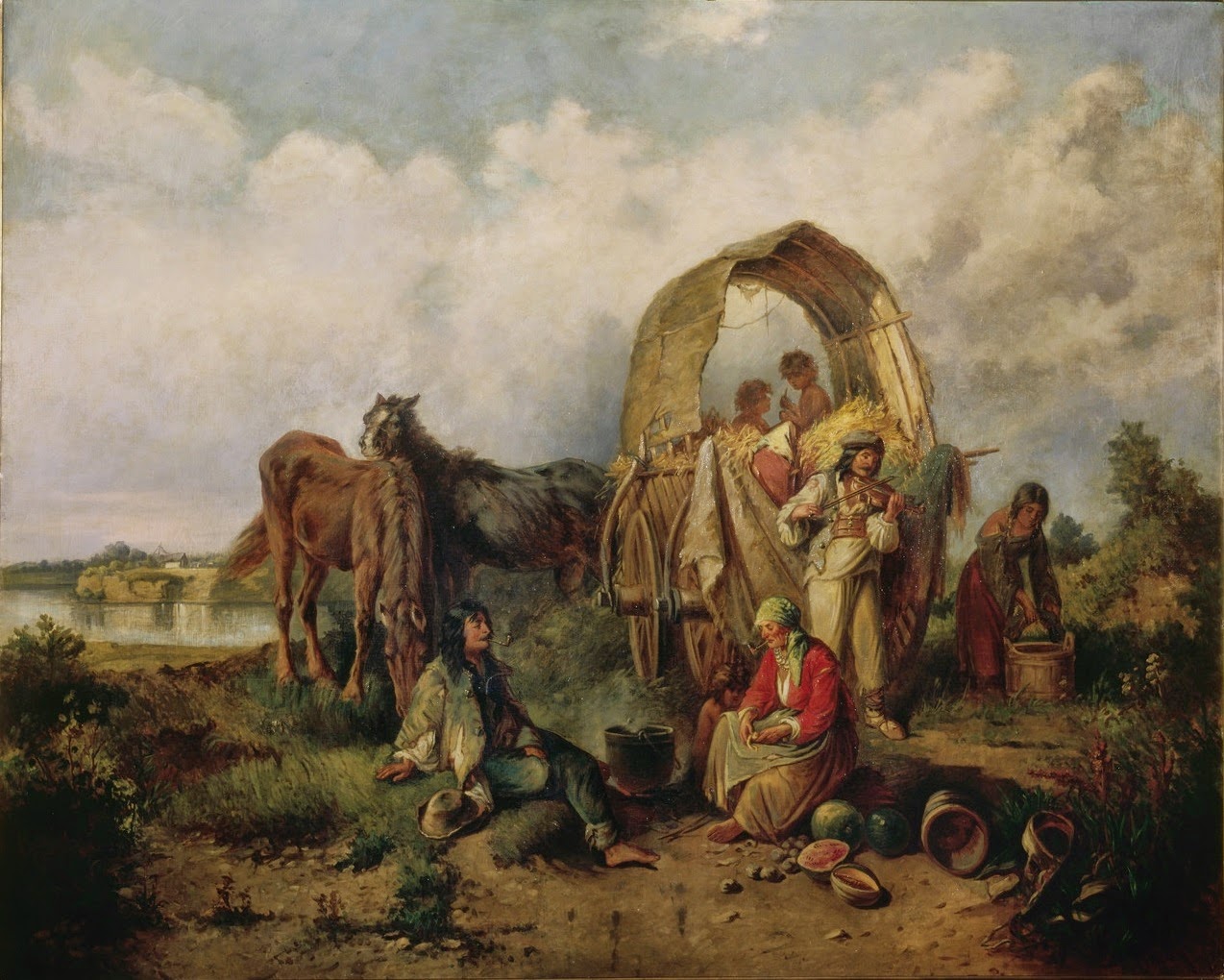 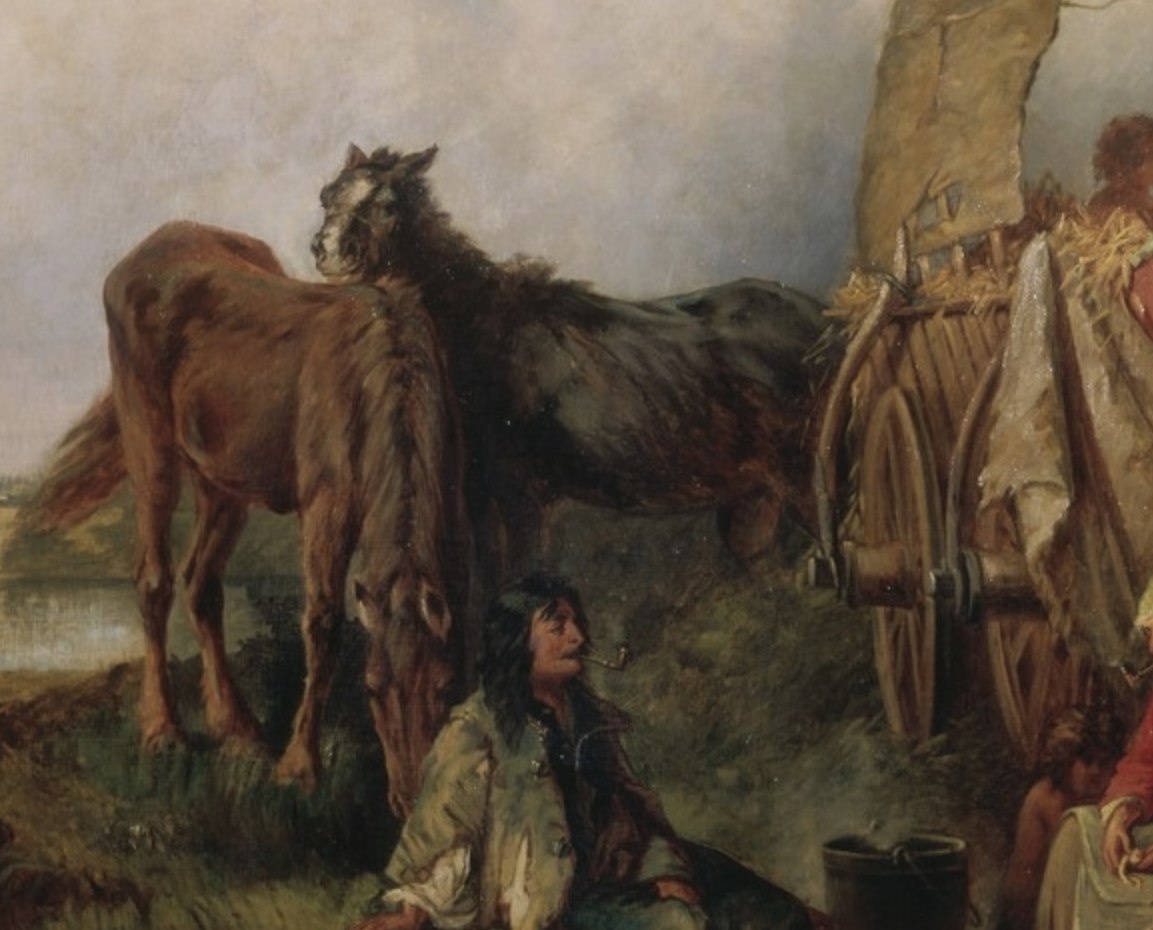 Salve,
Easter's eve, and with this occasion I would like to bring to your attention these three paintings  painted by one of the giants of the Hungarian art: Mihaly Munkacsy.


Christ before the Pilate

I wish you a very Happy Easter this year

* * *
to all my Jewish friends and their families:  Happy Passover
ps
interesting and quite short intro into the Munkacsy's art and life on this blog
ps'
it calls for watching Passion  again....