Salve,
again our good ecuyer Antoine de Pluvinel  and Crisspin de Passe's images from Pluvinel's treatise on horsemanship.
This time it is all about training horse for the tournament and eventually for war; in the final duel the rider must show chivalry, sensible deliberation and firmness in saddle (Piero Monte),  lightness of movement, cool head and loyal and courageous horse with strength and easy gait (Jean de Bueil), grace, courage, and strength, while playing with  lancework at the tilt  . 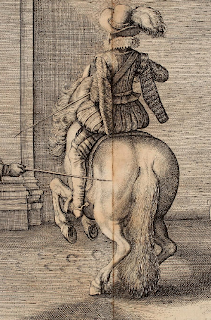 Salve,
again I ma going to continue in the thread of ecuyer Antoine de Pluvinel  and Crisspin de Passe's images from Pluvinel's treatise on horsemanship.

Today's batch consists of curb-bits, including the so called 'morisco' bit (two versions)

and the perfect cavalier on a perfect baroque horse

all images under Creative Commons Licence, so enjoy

Salve,
so as you can see I just 'corralled' a good number of  better quality images from the Antoine de Pluvinel's treatise on horsemanship, in png format - I wrote about the copy available at gallica.fr on my blog   in May - images by the Dutch artist Crispin de Passe.
The selected images  are showing work at the pillars, horse attached with a 'rope cavesson'(from gallica copy of the book)

Nota bene these prints are very valuable source of information on the period, including the costumes, side arms, and appearance of the noble riders and their servants, as well as of buildings in and around XVII century  Paris, including the Louvre castle.

Salve,
American historian, traveller and military man, Col. Theodore Ayrault Dodge wrote many interesting books  - the list from modern equivalent of  Alexandrine library collection - archive.org; and from his book 'Riders of Many Lands' comes a description of a bronco or horse of the US plains before coming of the Quarter Horse et al.
Well, let us read: