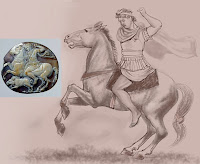 Salve,
I would like to share with you two sketches related to the Macedonian history and horse culture of IV century B.C. 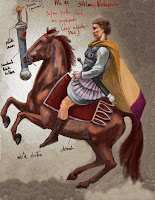 The very symbol of that culture is Alexander the Great,  the conqueror of Greece, Achaemenid Persian Empire (a film link), Illyrians and Thracians.
Here you can read the story of Alexander written by Plutarch, one of the four most important ancient  writers writing on young basileos* (king) life, Q. Curtius Rufus and L. Flavius Arrianus and Diodorus Siculus
Alexander was one 'hell of a rider' and a warrior without equals during his lifetime or ever, and he is often portrayed on horseback, the most famous is  this one, from Alexander Mosaic:

His most famous horse, Bucephalus, (for he had many more) is subject of many legends and stories , including a very nice book for children written by a Polish historian professor Anna Swiderkówna titled ''Koń, który trafił do historii'' (''Horse that landed in history books'').


* The second image has been inspired by a photo and description of an ancient stele showing a Macedonian horseman I saw in an article written by professor Nicolas Sekunda on the Ptolemaic guardsmen - Dress of the Ptolemaic Guard Cavalry. By the way,  I have  many books by professor Sekunda and they will come 'handy here,' as well as a book by professor Marek Olbrycht on Alexander and Iranian world, and I shall make use of them when talking and drawing more Macedonians, Greeks, and Iranians.
Posted by Dario T. W. at Tuesday, July 26, 2011

Daruisz check out this book , it has a lot of interesting images:

hello,
thanks for visiting and nice comments - you do have a very interesting blog - always interested in Ancient Hellas