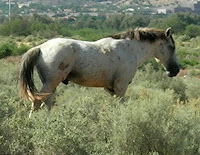 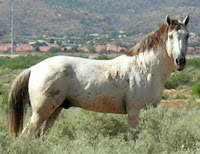 Salve,
today's post will be about politics and lack of respect for horsebreeding, history and traditions rather than art, unfortunately.
US government decided that wild horses that inhabit the fringes of the Western US are too much for the environment and too much for the government (too expensive). Bureau of Land (mis)Management and Secretary of Interior, one mister Salazar, decided to remove all the wild horses from their herd management areas to private ranches in the Eastern US, the horses being sterilized etc. This is in spite of what US Congress said in 1971 (after many years of reckless and brutal campaign to eradicate the wild horses from the public lands in the Old West):
An Act Of Congress
"Congress finds and declares that wild free-roaming horses and burros are living symbols of the historic and pioneer spirit of the West; (and) that they contribute to the diversity of life forms within the Nation and enrich the lives of the American people ..."(Public Law 92-195, December 15, 1971). I guess these horses no longer enrich the lives of the American people..
Dr Dan Phillip Sponenberg pioneered the study of wild horse genetics and he wrote many articles on the subject (eg “ Evaluation of Pryor Mountain Herd Area BLM Horses” Aug 1993) including the proper management of the wild mustang herds as direct descendants of the Iberian horses that were brought to the Americas from the Caribbean Islands http://www.horsequest.com/bredshow/mustang/mustg.htm He was aided by dr Gus E. Cothran from Kentucky who analyzed the wild horses from the Pryor Mountains as per their ancestry, and found them the direct descendants of the Iberian horses. Many other studies confirmed the historic and genetic uniqueness of these wild horses in the remote areas of the Western US.
Therefore these wild horses in the Pryors, Cerbat and Kiger BLM areas are as indigenous as they can be – they are actually more American than most of today's human Americans. The ancestors of these wild horses first appeared here millions of years ago on this North American continent and from there they migrated to Eurasia, only to return in 1519 AD. They’re living on the fringes of their natural habitat, and their numbers are a tiny fraction of what it used to be in the 19th century (one million in Texas alone). They are part of the Western natural habitat, unless one is talking about restoring the pre-1600 AD natural habitat of the West, with all plants and animal life. But I do not see large herds of bison, elk and pronghorns followed by the prairie wolves and peregrine doves etc appearing outside the few preserves etc – last time federally protected bison herd tried to walk out the Yellowstone Park the FEDS themselves shot them point bank. This type of horse as in the Cloud series by Kithrens – the Spanish mustang – exists nowhere in the world and should be protected as any endangered species in the Americas.

The BLM http://www.blm.gov/wo/st/en/prog/wild_horse_and_burro.html is not doing the job, they have not been protecting the herds or the wild life in general – especially the genetic viability of the so called special herds – Pryor, Cerbat, Kiger etc. The are protecting ranchers (lately almost exclusively corporate ranchers, as family ranching is a dying species out West) interests and Wall Street money invested in those cows and their calves grazing on the public (our) lands where they are paying next to nothing for the grazing fees. And it is our tax money that is paying for these ludicrous policies and practices. ON top of it the overgrazing leads to tremendous losses, both in monetary value (one billion a year) and damage to the range.
I cannot believe the stupidity and shortsightedness of the people involved in the mismanagement of the mustangs...
I saw wild horses several times during my trips to the West, in Nevada and Arizona mostly - in fact the pictures above was taken in Arizona.. on the Tohono O'dham reservation south of Phoenix, where about 2000 wild horses rescued from BLM clutches roam freely :)

Hope Ryden has been the foremost defender of the wild herds and she has written many books
A good book to read will always be a classic by Frank Dobbie titled 'Mustangs' http://books.google.com/books?id=ogEoCDJbX68C&pg=PA84&dq=wild+horses+mustangs&ei=FyDrSuODNp6WyASB4sTlAQ&client=firefox-a#v=onepage&q=&f=false but another that I strongly recoment will be Nobody's Horses http://books.google.com/books?id=-5v5hFJv2yUC&pg=PA16&dq=wild+horses+mustangs+white+sands&ei=qCDrSqSiB5vWNJ3x8LsJ&client=firefox-a#v=onepage&q=&f=false which is the story of the dramatic rescue of the wild herd of White Sands, New Mexico.
On film nothing is better that the Ginger Kathrens' saga about the wild horses of the Arrowroot Mountains of Montana - with a stallion aptly named Cloud as a chief protagonist - on PBS http://www.pbs.org/wnet/nature/episodes/cloud-challenge-of-the-stallions/video-full-episode/5297/
Ms Kathrens own website - "http://www.thecloudfoundation.org/index.php/home"
some links to more info
http://americanherds.blogspot.com/
href="http://www.pryormustangs.org/
Posted by Dario T. W. at Friday, October 30, 2009 No comments:

Saka and Skuda in one steppe dwelt

Sketches of the 1st millienium BC steppe horse masters - I know the ladies are missing, they should come shortly :) patientia virtutem est, amici mei.
Posted by Dario T. W. at Wednesday, October 21, 2009 No comments:

working.. the Parthians of sorts 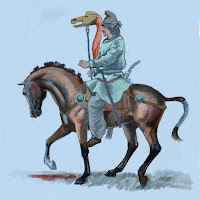 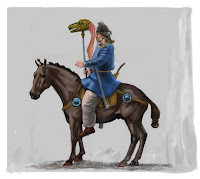 ...some sketches of proverbial Parthians, in various stages of 'undress' :)
Posted by Dario T. W. at Wednesday, October 21, 2009 No comments: