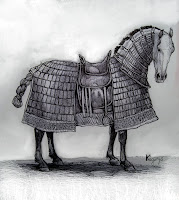 Salve,
Let us return to China and its nomadic heritage and equine past, to the time of the IV-VI centuries AD.
When in the western Eurasia and around the Mediterranean Sea classical Antiguity was slowly dying under assault of the Germanic barbarians and new religion, and where her direct heirs, Eastern Roman (Byzantine) Empire and Sassanid Persia, were locked in series of never ending wars, in the eastern Eurasia Chinese Han, eg a Han rider from Cernuschi_Museum , empire  Han_Dynasty collapsed amid fighting and corruption, and rivalry amongst the ruling clans. China rulers and conquerors  divided the Han empire into  Three_Kingdoms , while some parts went back to the nomadic peoples as they were restless and seeking their own empires, and soon, in the VI century AD,  almost the entire steppe was to be united under the Turkuts (ancient Turks) gumilevica.kulichki.net   beautifully reconstructed in this Russian article http://history.novosibdom.ru/node/31  or on this page ancient Turks articles ,  future arch-enemy of the Tang Dynasty and Sassanid Iran.

Three Kingdoms eventually collapsed and in the south of China we then have a leading Jin dynasty Jin_Dynasty 280-420 AD, but  their rule in the north was challenged by the nomads during the  IV century AD.  Because  in Han's wake the northeastern nomadic peoples of the Eastern steppes were bound to create their own smaller and bigger kingdoms, and  one group of proto-Turkic nomads seemed to distinguish itself -  Touba Xianbei xianbei . They absorbed  exhibit/nwei   former masters of the eastern steppe, multiethnic polity of the Xiongnu  xiongnu image002  (wonderful reconstructions  on this Siberian archaeology page history.novosibdom.ru/?q=node/45  ) that were chief enemies of Chin and Han dynasties empires until Han armies destroyed their might  xiongnu.atspace.com     xiongnu.atspace.com/art
article Xiongnu mutliethnicity archaeology
xiongnu belt plate
xiongnu silkroadfoundation.org
Toba/Touba Xianbei northern wei essay were most likely Mongolian/Turkic nomads, that came southward from the Manchurian steppe, and upon taking over the Inner Mongolia moved further south, and eventually in concert with Han Chinese elites created their own empire known as Northern Wei (386-534 AD), becoming sinicized towards the end of their rule over the Han populations.  Their steppe enemies were Turkic juan_juan  , some scholars believe they were know as Avars in western Eurasia.  Slav-Avar belt plaques/mounts
more images of steppe art, in this article associated with ancient nomadic Bulgarians bolgnames.com/text/Treasure.html
But Northern Wei was just one of the kingdoms or empires in China of that time Southern and Northern Dynasties, before the first reunification of Han China by the short lived Sui dynasty  Sui_Dynasty


In the history of the development of war horse harness this period II-VI century AD , within the eastern Eurasia milieu, had been the most  fertile ground  for revolutionary changes - it was the time of the development of solid  'treed' saddle (with pommel and cantle) from Saka/Sarmatian saddle eg saddle sibir_181 , curb-bit, stirrups, horse armor. Naturally some of these inventions were made within the Eastern Eurasia by the  various nomads and Han Chinese, and some came from the West, from the Sassanid Iran (Persia) etc.

in the western part of the 'Chinese' steppe, in today's Chinese Turkestan, lived Tocharians, Indo-European people of the eastern part of the Silk Road,   Tocharian Qizil Cave Donors Their towns and fortresses will become of part of the Tang Empire, and from there Tang China will clash with oncoming Arab conquerors of Central Asia, in the battle on river Talas

Some literature on war, Iranian influences in China, 'Chinese' nomads, Chinese miltiary during the end of I milenium BC and fist 500 years of I milenium AD time frame etc:
Article on iranica.com articles chinese-iranian influences
Nicola di Cosmo, Ancient China and its Enemies http://books.google.com/books?id=va-IUoQTNCQC&printsec=frontcover&source=gbs_atb#v=onepage&q&f=false
works of  Albert Dien - very intresting article on the preTang armor in China, while another one -  on Chinese, Korean and Japanese horse armor - is also a very interesting article, and here link to his very interesting book on the lifes and arts of   six dynasties
Chris Peers, and Michael Perry work for  Osprey,  for this period the vol I of imperial China  Imperial China
and  another rather Osprey, badly needing rewriting but with beautiful iconography and illustrations by late Angus McBride, Atilla and Nomad Hordes, by dr Nicolle attila and hordes
For reconstructions of the nomadic warriors you can look for  "Warriors Of Eurasia, from the VIII century BC to the XVII century ad" by Mikhael V Gorelik, Montvert Publications, 1995.
For the nomadic Bronze and Iron Age art in China nomadic heritage best are the  books by art historian Emma Bunker , eg Ancient Bronzes of the Eastern Eurasian Steppes or Nomadic Art of the Eastern Eurasian Steppes

but this article written by two art galleries, Janssens and Wace with Emma Bunker help, on the Bronzes is also easily accessible via net nomadic bronzes
Interesting book by Davis -Kimbal, Bashilov and Yablonsky Nomads in the Early Iron Age
Orlat belt palque  - found by Galina Pugachenova,  these are some of the most important images of Central Asia nomadic warriors and warrior lore, perhaps  Xiongnu warriors in this article  with detailed drawings Mode Orlat and Russian language version by messers Nikonorov and Khudiakov Nikonorov Khudiakov orlat
...and so many others, one only needs to starts searching the net...

In China equine-military history overview treads on my blog, next I think I am going to tackle the Tang China and her marvelous horse.
And here is a very interesting site with reconstructed images of Chinese warriors' arms and armor throughout the history china-ancient-armours

ps
I hope to cover some of the subjects mentioned above  in more specific blog entries with my own reconstruction etc.
ps'
little sketch of a Sui or Korean caparisoned horse, drawn without a bridle nor bit - on purpose :)
Posted by Dario T. W. at Sunday, August 15, 2010

Wow , thats some extensive research you've put into this entry!

Though China and eastern Eurasian steppe are outside of my interest (just for now anyway!), the bit about the development of the horse tack intrigued me the most. During your research didn't you perhaps came across any books/scholarly articles in English (or perhaps Polish) on the subject ? ( I am especially interested in the context of middle ages-European or otherwise; I have always been intrigued on the debate of short vs long stirrups , the development of high knightly war saddle, riding with spurs vs whip etc.)

Anyway , thanks for the fine article !

thank you Samuel!
well, there are books and articles on the subject eg, the Army of Tang Army by Karl Ranitzsch, Imperial China - Bill Cooke editor et al, and I intend to use them in future entries on my blog. But you can read the phd thesis from Penn State I attached to my other entry on the Tang Taizong horses - http://dariocaballeros.blogspot.com/2010/07/china-i-tang-taizong-and-his-steeds.html it talks about the saddles, stirrups etc. There are many Russian language articles on the nomadic saddles - Sovetskaya Archaelogia magazine has some of them - check the listing of all its titles here http://annals.xlegio.ru/sbo/contens/sa.htm
once again, I am very happy that you find it informative

Thanks for the info Dario , much obliged!

my email is dario( then right behind my name write numbers ninesixsix without any space in between) 'at' gmail.com

Not my normal field of study but very interesting topic Dario, nicely done!

Dario, Excellent work! You have obviously spent a lot of time researching this extremely interesting topic. I have also written on this subject with the
view that the very distinctive Asian saddlery styles appear on the
extant saddles of Native Americans.
My observations can be viewed at
chinesediscoveramerica.com