Hello again,
we, Polish people, celebrate Christmas with 3 days of eating and bonding,  especially reestablishing family and friendship bonds, and it is a very joyous time of the year. 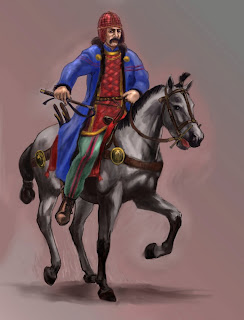 However, in today's little entry I would like to  return for a moment to the time of the other great Jewish (and a bit Arabian) king of Judea  known to us a  Herod the Great , whose dynasty ruled, solely with Rome's nod and approval,  the last independent Jewish kingdom in the Holy Land (ending with the death of  Agrippa II circa 100 AD) The other independent Jewish state was the  khanate of  nomadic Chazars of the Pontic-Caspian steppes, but  more than a millennium after the last Herodian ruler.
I just received, as a Christmas gift, this little Heracles (so much good info0 of a book published by British Osprey, titled 'The Army of Herod the Great,' written by Samuel Rocca and nicely illustrated by Christa Hook.  It is a book about the military of the Jewish-Hellenic client-state  existing on the borders of the Roman Empire.
There are many interesting figures in this book,  especially Hatrene warriors,  or the Thracians and Galatians in Herod's service.  But my first 'love' is another cavalryman mentioned in the book and painted there along with his commander. It is the 'Babylonian. '

I sketched this horseman out off the plate F in the book, sort of coping it and changing some.
He is a member of  this so called Babylonian light horse archers unit, created by one Jewish nobleman named Zamaris and hired by Herod. Zamaris  at some point of his adult life moved from the Parthian kingdom, where Jews had lived and prospered for centuries,  to the Herod's realm and entered Herod's army as commander. Mr Rocca, after Shutzman, says that from Mesopotamia our Zamaris emigrated along  with his entire retinue and  initially must have created this 'Babylonian' unit of horse archers for  the Herod's army out of his retainers. Jospehus Flavius, the Jewish_Roman ancient historian, wrote about Zamaris and his riders (AJ XVII , 24).

He wears Parthian ridding coat with fur trimming (slit from the hem to hips to allow easy mounting and ridding horses), quilted tunic, quilted hat,  Leather belt covered with gilt-metal plates,  and tied with laces. His weapons are the two unstrung composite bows, with a tubular quiver (unseen as covered by his coat), and long sword (unseen), suspended from the second belt, and his horsewhip, quite a weapon itself - eg just read the Tyrant novels by Mr Cameron.
Horse has a typical horned and stuffed leather saddle, secured with broad breast and croup straps, adorned with bronze pahalerae (medallions),  while his saddle is covered with a cloth...  His horse' snaffle bit has long psalion bars for stability etc. I drew  his horse's tail tied as the Iranians used to do, and its forelock is also tied up with leather thong, in the same Iranian  martial fashion ( this sketch and info  pertaining to the cavalryman are based mostly on the Mr Rocca's book).

I did my sketch entirely on my Linux computer, using GIMP and MyPaint drawing with the Wacom tablet.

Merry Christmas...
ps
I found more info on the Babylonian horsearchers unit - according to Jonathan P.  Roth, Zamaris came to Judea around 20 BC, possibly having defected from the Parthian service. He and his followers (500 soldiers and 100 relatives) were taken by Herod into his service as horsearchers, and settled in town called Bathrya, in Batanea. This military colony under Zamaris was organized in such a way that Zamaris' unit performed military service in exchange for freedom from taxation (what a great king Herod was!  the next tulers tired to change this approach).  The unit survived Herod's and Zamaris' deaths, and was commanded, according to Flavius Josephus,  first by Zamaris' son  Jacimus or Jakimus (who trained soldiers in arts of horsemanship and horse archery, and provided king's bodyguards)  and then his grandson Philip Ben Jakimus, who was of strong hands and friend of Agrippa.   The Babylonian archers unit size also increased over time, from 500 to several thousands, again according to F. Jospehus who claimed that this 'Babylonian' unit was as large as the rest of king Herod Agrippa forces. Most likely Philip as strategos  was the commander of the 2000 cavalry that king Agrippa II sent to quell the budding Great Uprising in Jerusalem  (66AD )which failed but they were allowed to retire from the city. Then they fought alongside the Roman army during this long and difficult war, with Philip fighting and surviving the large Roman defeat at Beth Horon, later being most likely the commander of the entire Herodian army   (Roth,  Jewish Forces in Roman Service p.  6 - 23,  Flavius Josephus  on Zamaris and his unit  p.210-11 here  http://books.google.com/books?id=II5DAAAAYAAJ&pg=PA209&lpg=PA209&dq=zamaris+flavius+josephus&source=bl&ots=H9JP4VC6Tm&sig=t8tGSt48OOOvIQUf-0HJrY6MNy4&hl=en&ei=ZmI2S7eLJ861lAfB4dzdBg&sa=X&oi=book_result&ct=result&resnum=1&ved=0CAoQ6AEwAA#v=onepage&q=&f=false )
Posted by Dario T. W. at Thursday, December 24, 2009 2 comments: 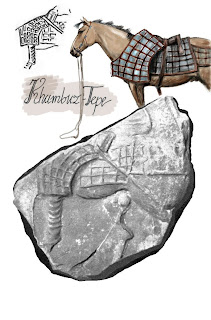 This is the famous Khumbuz-tepe ostracon from southern Chorasmia (Uzbekistan), dated from late IV to III century BC.
I included my own ad hoc conceptual representation of the armored saddle as suggested by Philip in his commentary to the Massagatean warrior...
Posted by Dario T. W. at Wednesday, December 09, 2009 No comments: 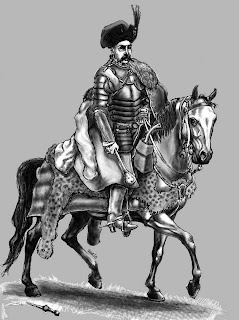