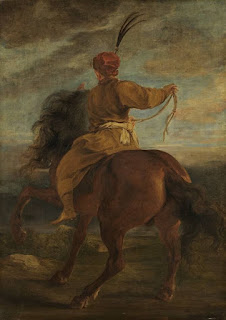 It is located in the Bavarian State Painting Collections.

Salvete Omnes,
8 years ago I posted this entry about Wladyslaw Szerner.
well, nowadays there is a short page about this painter on Wikipedia and even a gallery - therefore I will coral some paintings from that gallery: 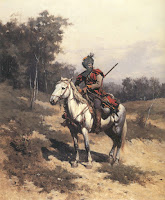 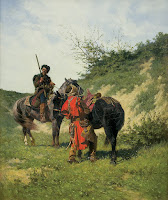 and three paintings by his son Wladyslaw Karol Szerner 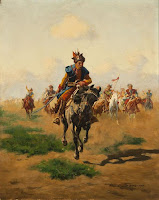 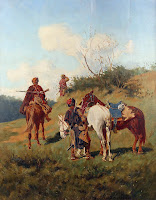 Salvete Omnes,
back to my favorite Baroque period in equestrian history and some very fine equestrian portraits of the first half of the XVII century.
do note the horses, their color, tack (long shanked curb-bit) and riding aids like spurs, armor, and finally the rein holding hand's position as well as the seat and legs. 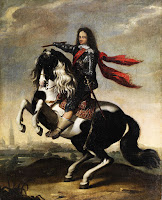 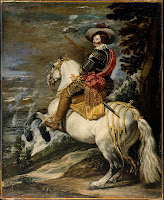 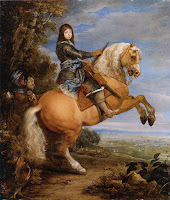 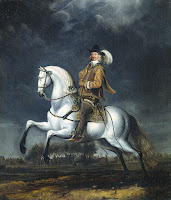 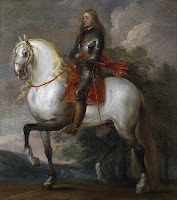 Valete!
ps
the identities of the men portrayed is given in the titles of each painting - all works come from wikimedia commons 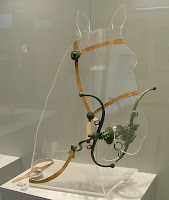 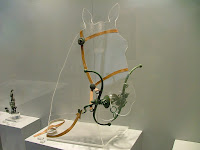 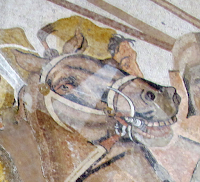 Salvete omnes,
Columbus Day or the day of discovery of the Americas by the Europeans is tomorrow although in the US its celebration's changes the date and actually hoovers around the 12th of October (this year it was the 8th).
On wiki commons there is a gallery of extraordinary works from circa AD 1700, showing the American Indians, flora and fauna of New France or the France held lands in North America.
The collection is called Codex Canadensis and was perhaps drawn by Luois Nicolas,  one of the Jesuit priest-missionaries in la Nouvelle-France.

Among the drawings there are two plates showing horses.
I am not sure about the early horse history in present day  Canada.  So let's put some faith in the writing that says that the drawing shows one of the stallions sent (along with 60 fine mares) to New France in 1660s. And that from these horses more fine horses were bred in French Canada.
Canadian horse breeders association put on their webpage that the French horses were sent in 1663 and that there were 12 of them, but more shipments followed.
Perhaps this horse is a spotted one,

Dr Deb Bennett in her book Conquerrors states that this horse is of Breton horse ancestry. (page 390).
Francis Parkman in his book - Count Frontenac and New France Under Louis XIV - writes about the horses in Quebec a bit - first, that the stocking of the country with cattle, sheep and horses was done with the royal shipments and at king's expense and distributed gratuitously among the settlers, and no youngones were to be killed until there was enough stock to replenish itself (p.212-13). So perhaps horses had been arriving yearly for some time, eg one books claims period of 1665-1671, first shipment being 2 stallions and 20 mares.
Parkman writes more about the curious horse history in Quebec, namely circa 1710AD that the inhabitants engaged in horse breeding on  such large scale that this horse husbandry worried so much the royal governors (in true paternal fashion - he, he, the French absolutism) that the royal governor  proclaimed a new law forbidding the possession of more than 2 horse and 1 foal. Excess had to be removed away or killed  - presumably for meat and skin- in the ensuing harvest year (p. 279).
The second drawing shows a horse of the New Holland (New Netherland) or the Dutch colony in North America - although circa 1700 AD there were not Dutch colonies on the American continent, only in the Caribbean, and of Virginia of the Atlantic coast. Perhaps the Dutch imported those from the Spanish colonies or their holding in South America (Portuguese colonies there).

What is even more interesting those Canadian horse were being spread west and southwest from Quebec by French traders and their native trading partners. Deb Bennett wrote in her book that perhaps as early as 1675 Pierre Moreau known as La Taupine was trading horses to the Indians of the Illinois country (p. 384). Perhaps especially after the Montreal proclamation of 1710  that those French horses made their way onto edge the Great Plains, spreading from Ontario west to Saskatchewan and south to French outpost of St. Louis (present day Missouri). There they met the Spanish horses coming from the New Spain. During the XVIII century the Indian ponies and wild mustangs became a product of this mixing of Spanish and French-Canadian horses.

I think I have to get The Epic Journey of the Canadian Horse: History and Hope from Louis XIV to the Present in order to learn more
Valete!
Posted by Dario T. W. at Thursday, October 11, 2018 3 comments: 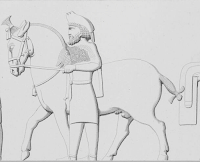 Salvete Omnes,
I have not been to ancient Persia lately, hence there is this opportunity revisit, via Coin Archives .
In particular, there is this set of coins from Tarsos related to the period of 450-400 BC when a number(?) of  Syennesis of Cilicia (Cukurova, modern Turkey)  or the rulers of the Achaemenid satrapy, were important, perhaps semi-independent lords of that important satrapy during the tumultuous V century BC.
The coins contain plenty of detailed information - horse type, horse tack, tied forelocks and tails, arms and armor of the horsemen and king-divine figures etc.
1.fabulously detailed coin with a horseman typically armed with a bow and wearing kyrbasia
2. a horseman wearing a Median coat or kantus
3. another horseman wearing a kantus
4. horseman wearing kyrbasia
and more Cilcian satrapy coins - more or less damaged - but still amazing 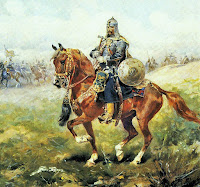 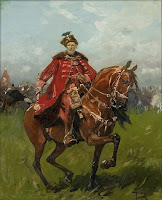