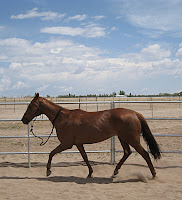 Salve,
last four weeks I have been learning to work with a problem horse - namely barn sour mare of some 10 years of age, that did not want to leave her barn, saddle up, bucked when rider sat on her back, broke from walk  into pell-mell gallop when ridden, and showed other signs of aggression. This has been a very rewarding experience for me. The picture above shows here - Kiowa - at the second week of round pen training (at Fair View Farm). ( I have some interesting observations regarding the use of the famous buńczuk (horse hair tug) used by the Turkish people - and after them by the Tatars, Hungarians, Polish-Lithuanian Commonwealth riders, and yes,  American Indians of the Great Plains- after this experience that I will share with you in the future)
Upon doing plenty of reading prior to the training and talking to people I decided to use a rope halter for groundwork and then traditional hackamore (rawhide bosal, mecate-horsehair- reins etc) fro riding. This picture shows her on the 1st day I put the hackamore on her, and ever since we have been switching between hackamore and rope halter when ridding using a standard A-fork western saddle - done 8 one-hour rides, plenty of bareback, and many, many hours of ground work and just simple walking the prairie with a leadrope, while plentiful black-tail prairie dogs, occasional coyotes, pronghorns, ubiquitous cottontails and ground squirrels, and funny jack-rabbits run and falcons and hawks fly above.  No bit - snaffle & curbit nor mechanical hackmore has been used this far.. 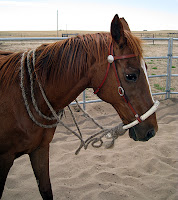 Some example of reading I have been doing:
Rarey
Ed Connell's Reinsman of the West-Bridles and Bits
Ed Connell's HACKAMORE REINSMAN
Marty Marten Problem-Solving
Pat Parelli, Natural Horsemanship
Ray Hunt, Think Harmony with Horses
Bill Dorrance, True  Horsemanship through Feel
and some others, including the videos available via youtube etc 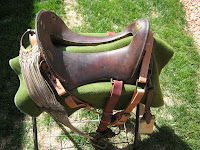 In between I have got myself a nicely preserved US cavalry  11 1/2 '' seat McClellan saddle from 1904, we had to rebuilt the straps (done by fine artist and master leather maker Mort Fadum from Latigo tack shop in  Elbert, Colorado)
Also we bought this nice 1900-20 saddle by Frasier Co from Pueblo, Colorado - 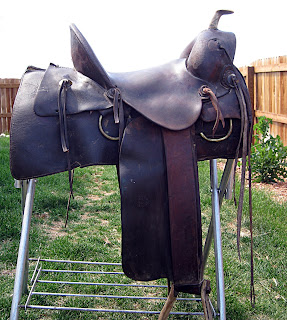