Progress and corrections on the King of Kings hunting 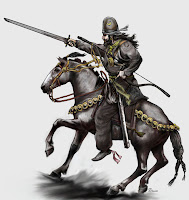 hello,
summer is about to hit us with some warm weather in NYC, so definitely there will be less work to be done at home :)
Some little corrections (his bow mainly as I was advised on the great forum for ancient world military history enthusiasts and reenactors romanarmy.com http://www.romanarmytalk.com/rat/viewtopic.php?f=25&t=26749
I did on the famous Sassanian King Bahram Gur, and started adding some color.
Plus I started working a little on some older images of the Sassanian knights... so they will make their appearance here sooner than later ;)
pa ka
Posted by Dario T. W. at Friday, June 26, 2009 No comments:

czolem,
this time I am showing you a little drawing that I did long time ago and recently changed a bit (computer canvas :) ). Done in the fashion of the Stockholm Roll's winged hussars, but with a pistol in the holster hung at the pommel.
At this excellent and highly recommended site you can find pictures of the entire painting known as the Stockholm Roll (it is called Stockholm because when in 1655 AD Swedes captured Poland's capital - Warsaw - they stripped all the city palaces, including the Royal Castle, of any and all valuables whether these might have been movable or just works or architecture, stone work, murals attached or paintings glued to the walls, and our Roll depicting the ceremonial entry of the king's bride into the old royal city of Cracow was one of such painting attached to the walls in the Royal Casttle.
The Swedish robbers took the painting off the walls and carried it to Sweden and there it remained until it was returned to Poland in the 1970s.
Yet many thousands of Polish cultural treasures remain in Sweden's collections, probably never to be returned - somewhat like the Elgin marbles http://www.kismeta.com/diGrasse/StockholmRoll.htm
Posted by Dario T. W. at Thursday, June 18, 2009 No comments: 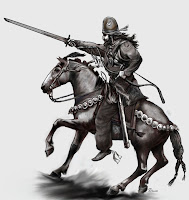 Hello again,
I am working on many different sketches of the past (reworking them from drawing and watercolor paintings into the digital 'paintings'), but at this time would like to share with you something that is a curious (to me) combination of several persons efforts.
The story goes like this - the initial sketch was done based on my friend Kaveh's drawing - he did it for late Angus Mcbride so this famous illustrator could paint the plates for Kaveh's Osprey book on the Sassanian heavy cavalry, the particular plate depicting death of Julian Apostate battling Sassanian cavalry- then I did a sketch based on Kaveh's and then my friend Patryk - a scholar of the Ancient Iranian military, eg author of the Sassanian cavalry article for the Ancient Warfare Magazine vol.1, issue 4 - made many suggestions on how to improve and how to arrive closer to the probable historic appearance of such Sassanian rider wielding both a pistol grip Sassanian sword (the forerunner of a sabre grip) and short Sassanian bow.
Why the title - well, Patryk had suggested that this could be a depiction of Bahram Gur during hie famous campaign against the White Huns or Hephthalites - http://en.wikipedia.org/wiki/Bahram_V and I liked his title so it will stand...
Many thanks to Patryk :)
to be continued
Posted by Dario T. W. at Wednesday, June 17, 2009 2 comments: