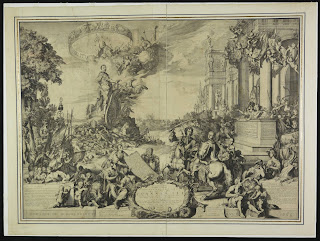 Salve,
king Jan III Sobieski is one of my personal heroes, between his achievements as a king, statesman, commander, family man, famous lover of women and excellent writer (letters to his beloved wife Marie ). I must add he was also our most Oriental monarch, embodiment of the Sarmatism, excellent administrator, horse owner and breeder, fine horseman and warrior (started his military career with the battle of Zborow, he was at Beresteczko of 1651 where he was seriously wounded, and perhaps because ofthat wound he escaped the fate of his  brother Marek murdered at Batoh a year later, nota bene  Beresteczko- in Polish: interesting discussion here and current state of the battlefield in this article).
Here are some horseback portrayals  of our famous king, victor of many battles, unfortunately he had to fight the Ottoman Turks (spoke Turkish) and Crimean Tatars (he spoke their language too), while he wanted and should have fought the Prussians, Russia and the Hapsburg Austria. One image shows the king at his triumph at Chocim - this is my bit longer entry on that painting and the battle.
I have plans to draw some images involving the king :) , God willing
Kossaks' paintings of Sobieski Vienna 1683  Before battle  Entry into Vienna Sobieski's Hussaria Vienna 1683 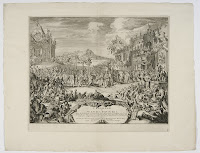 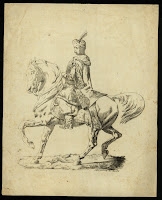 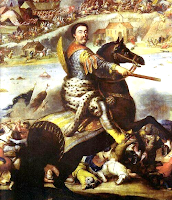 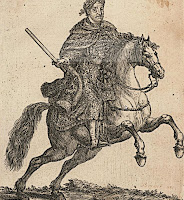