Salvete Omnes,
just a little news
I finally received the Bison Book edition of the Ledger Book of Chief Joseph White Bull (1849-1947) - eg the NPS Little Bighorn Battlefield entry devoted to the great warrior and storyteller (unfortunately a very small photo of our chief). The 1968 edition, published by the University of Nebraska Press , also appears to have been available on Amazon etc.

Pte San Hunka  or White Bull, a nephew of Sitting Bull,  had a very long life, adding Joseph to his name  during the reservation life. During the 1932 his stories were told in the series of interviews to a historian and writer Stanley Vestal (nota bene Oklahoma Historical Society entry on the author is easy and quite informative and has a photo of Stanley Vestal with White Bull), then who worked them over a bit (or so they say) and in 1948 published White Bull's  lifestory in a book titled Warpath : the true story of the fighting Sioux told in a biography of Chief White Bull , that you can borrow the later edition from Archive, upon registration etc.

So I am looking forward to read this autobiography,  meantime you can read the Stanley Vestal's article from 1957- The Man Who Killed Custer - at the American Heritage website. 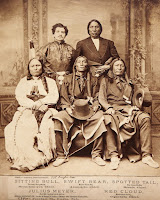 this event - meeting between general Miles and Sitting Bull - was described by White Bull in his recollections.

ps
the photo of various 'Big men' of the Lakota just for illustration purposes
Posted by Dario T. W. at Sunday, January 26, 2020