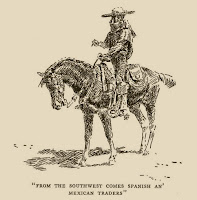 Salve,
I admit I love looking at the paintings and ink drawings by
Charles Marion Russell (own two books on his paintings) but often I have to remind myself that he also was a great sculptor...and a writer, e.g. his fine book "Trails Plowed Under" - with many of his own illustrations - is accessible here.

The very spirited piece depicts one of the most dangerous evolutions that some unhappy horses could engage in while being 'gentled' no-so-gently into a remuda (working horses' string) by the cow-puncher or cowboy. In this photo below one of the rare historic depictions of a horse throwing himself backward.

Before I go to the depiction of that sculpture as told by maestro Charlie himself, let me quote his own lines describing what a cow-puncher was, the varieties of cow-punchers and their equipment etc:
"[cow-puncher] ranged from Mexico to the Big Bow River of the north, an' from where the trees get scarce in the east to the old Pacific. He don't need no iron hoss*, but covers his country on one that eats grass an' wears hair. All the tools he needed was saddle, bridle, quirt, hackamore, an' rawhide riatta or seagrass rope; that covered his hoss. 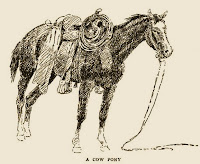 "The puncher himself was rigged, startin' at the top, with a good hat not one of the floppy kind you see in pictures, with the rim turned up in front. The top-cover he wears holds its shape an' was made to protect his face from the weather; maybe to hold it on, he wore a buckskin string under the chin or back of the head. Round his neck a big silk handkerchief, tied loose, an' in the drag of a trail herd it was drawn over the face to the eyes, hold-up fashion, to protect the nose an' throat from dust. In old times, a leather blab or mask was used the same. Coat, vest, an' shirt suits his own taste. Maybe he'd wear California pants, light buckskin in color, with large brown plaid, sometimes foxed, or what you'd call reinforced with buck or antelope skin. Over these came his chaparejos or leggin's. His feet were covered with good high-heeled boots, finished off with steel spurs of Spanish pattern. His weapon's usually a forty-five Colt's six-gun, which is packed in a belt, swingin' a little below his right hip. Sometimes a Winchester in a scabbard, slung to his saddle under his stirrup-leather, either right or left side, but generally left, stock forward, lock down, as his rope hangs at his saddle-fork on the right. 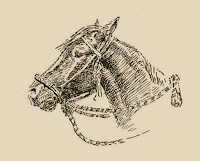 "By all I can find out from old, gray-headed punchers, the cow business started in California, an' the Spaniards were the first to burn marks on their cattle an' hosses, an' use the rope. Then men from the States drifted west to Texas, pickin' up the brandin' iron an' lass-rope, an' the business spread north, east, an' west, till the spotted long-horns walked in every trail marked out by their brown cousins, the buffalo.

"Texas an' California, bein' the startin' places, made two species of cowpunchers; 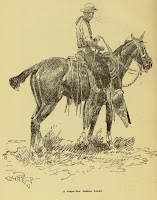 those west of the Rockies rangin' north, usin' centerfire or single-cinch saddles, with high fork an' cantle; packed a sixty or sixty-five foot rawhide rope, an' swung a big loop. These cow people were generally strong on pretty, usin' plenty of hoss jewelry, silver-mounted spurs, bits, an' conchas; instead of a quirt, used a romal, or quirt braided to the end of the reins. Their saddles were full stamped, with from twenty-four to twenty-eight-inch eagle-bill tapaderos. Their chaparejos were made of fur or hair, either bear, angora goat, or hair sealskin. These fellows were sure fancy, an' called themselves buccaroos, coming from the Spanish word, vaquero." 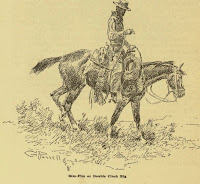 "The cowpuncher east of the Rockies originated in Texas and ranged north to the Big Bow. He wasn't so much for pretty; his saddle was low horn, rimfire, or double-cinch; sometimes 'macheer.' Their rope was seldom over forty feet, for being a good deal in a brush country, they were forced to swing a small loop. These men generally tied, instead of taking their dallie-welts, or wrapping their rope around the saddle horn. Their chaparejos were made of heavy bullhide, to protect the leg from brush an' thorns, with hog-snout tapaderos. 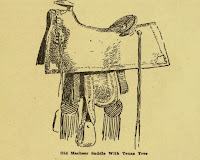 "Cowpunchers were mighty particular about their rig, an' in all the camps you'd find a fashion leader. From a cowpuncher's idea, these fellers was sure good to look at, an' I tell you right now, there ain't no prettier sight for my eyes than one of those good-lookin', long-backed cowpunchers, sittin' up on a high-forked, full-stamped California saddle with a live hoss between his legs. 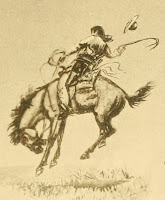 Now to the sculpture, in Charlie's own words (from  Charles M. Russell Sculptor):

"The old-time cow-puncher knew his horse and it was often a battle of wits when he was “breaking" him to ride. This horse is making a fight and is figuring on landing on his riders. This rider being of the best, is thinking too. As he steps off his fighting horse he will be standing besides him when he lands and having a hold on the cheek piece of the hackamore, will help the horse bump his head a little harder when he hits the ground. As the horse comes up the cow-puncher will grasp the horn and will be in the saddle when he gets on his feet again. [...] most horse think twice before they throw themselves a second time."

+All drawings by Charles Russell - in public domain+
---
*hoss - horse
ps.
I have been reading Charlie's biography - quite an interesting read. By the way his illustrated letters have been published too - fascinating material in there :)
Posted by Dario T. W. at Sunday, April 29, 2012