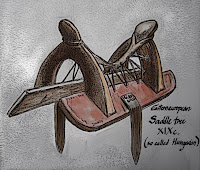 Salve,
let me turn to a book by an Austrian Hussar officer of the 1860s, who wrote extensively on horse riding, saddles and bits , and his work was very popular with the cavalry, printed several times throughout XIX century.

By Francis Dwyer, hussar officer of the Austrian cavalry

Firstly I want to share this excerpt from his book dealing with light cavalry saddle tree - or so called Hungarian saddle (equally Polish saddle as it was Hungarian, except that Poland ceased to exist in 1795 when these saddles were already popular in England under the name Hungarian)

''With the light cavalry (or Hungarian) saddle, it will not do to put a man into it as it comes out of the saddler's hands, and order him to sit in a particular manner ; it is just as necessary, or more so, to make the saddle fit the man's seat, as to make his coat or boots fit his body or feet; and this is done, after careful observation of the seat, by shortening or lengthening the bearing-strap of the seat, or by altering the lacings, till the seat comes right of itself, when you don't need to correct it in the riding-school.'' 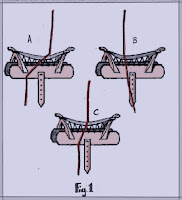 ''Fig. [1] shows the outlines of those Hungarian saddles. At a the bearingstrap of the seat is laced down so as to have its lowest point towards the rear of the saddle, the consequence of which is to throw the rider's seat back on the '' Monboddo bone'' (tail bone), bringing the thigh forwards and the knee towards the horse's shoulder, wash-ball fashion. At b the reverse is the case; the bearing-strap being laced down in front, its hinder part throws the rider altogether into his fork, and the thigh and leg come too far back, muff fashion; a bends his neck and shoulders somewhat forward in order to get his balance, whilst 6 strains them backwards. At c the lowest part of the bearing-strap is in the middle of the saddle, all of which variation depends on the lacing, supposing the length of the strap itself to be the same : c therefore sits on his triangle with his body upright and his legs coming down in their natural fall, his whole weight being spread over the entire under-surface of the saddleblades ; whilst it is evident that the weight of a, being far to the rear, will press down the hinder ends of the saddle-blades into the horse's back, tilting up the front ends; b, on the contrary, drives the saddle-blade ends into the horse's withers : a's saddle will probably run forward, &'s horse run through the girths.
The place of the stirrup and its influence on the seat is here altogether left out of consideration. It should be made to accord with the seat, and not the seat with it, otherwise the rider is always " contending against" his stirrups, instead of " depending on them."''

''How the bearing-strap* of the saddle should be exactly laced will depend altogether on the " plenitude " or " poverty " of the seat of honour of each individual rider. A very full-sized sitting part requires the lacing to approach that shown at a in order to make the rider sit like c; a very spare man, on the contrary, will require something like b for the same purpose : for most young men it will do best as at c''

* The bearing-strap of the seat is best made of a piece of good girthing-web, doubled together so as to form, with its central portion, a collar to embrace neatly the hinder knob of the saddle, the two branches being sowed by their edges together down the middle of the seat, and ending, the one with a strap, the other with a buckle, which, when united, form a corresponding collar for the front knob. Brass eyelet-holes stamped into the outer edges at  certain intervals should be an improvement. Of course a movable strap covers this bearing-strap, the lacings and the side plate of the saddle, as far down as the tops of the girth at each side, but it is on the length of the hearing-strap, and the way in which it is laced, that the form of the seat will depend. Of course all the edges of these wooden saddles must be nicely bevelled off.


''The hunting man rides his own horse for his own pleasure, and does not mind spoiling a steed or two for the sake of maintaining his character as a forward rider. Cavalry soldiers must ride together almost always: what regulates their speed is the average of a whole regiment, and not the swiftness of a single animal. The Oriental national cavalries won't understand this, and get beaten by riders who, taken singly, are very inferior. Again, the hunting man's proper work is all done at full gallop; cavalry does at least five-eighths of its work at a walk (route marching), perhaps twoeighths in trot (manoeuvring), and certainly not more than one-eighth at full gallop (in charging). The conclusions to be drawn are, that even supposing the so-called " hunting seat" to be the best for high speed, no Government can afford the waste of horse-flesh it involves, nor would there be the slightest use in doing so. On the contrary, this style of riding can only lead to loose and broken charges, or to a voluntary abandonment of full gallop in charging. Further, the fox-hunter does not require sharp turning, and he has both his hands at his disposal; whilst the cavalry soldier's life depends to a great extent on his horse being able to 'turn suddenly and rapidly with the aid of one hand. The poise or equilibrium of horse and rider taken together can never be too perfect or too permanent in his case. One of the great mistakes committed is the supposing that what is called a balance-seat is the one thing necessary. The whole machine must be in balance, and not the rider alone.
But the greatest difference is in the absolute weight or load to be carried. A hunting man buys a horse up to his weight; cavalry can do nothing of the sort, for their horses are compelled to carry any load we please to inflict on them. People rig out a soldier with everything that combined bad taste and absurdity can suggest—put him on a horse that must not cost over a certain price, and call him a hussar, dragoon, or lancer, according to the cut of his coat; and so it comes that what is called heavy cavalry sometimes rides lighter, and is altogether lighter, than what people are pleased to consider light cavalry.''

On Hungarians and surcingle
''The Hungarian Puszta rider, or cattle-herd, and most Orientals, never use anything but a surcingle, the great advantage of which is that, having loosed it to let their horses graze, they can tighten it with one pull, and are in the saddle and well under way whilst one of us is still fumbling at a multiplicity of straps: and moreover, his saddle remains where he put it; ours seldom does so except by chance.''


On stirrups and instructions -

''Should we give our first instruction in riding with or without stirrups - The advocates of beginning without stirrups say, you must first give the pupil a seat, and then -when he has acquired balance and a hold of his horse, you can give him the additional assistance of the stirrups. Now the most difficult thing to attain is balance, and the stirrup was devised for the purpose of assisting in acquiring and maintaining it; and it is therefore just as reasonable to act in this manner as it would be to set a boy to learn swimming without corks or bladders, and when he had learned to support himself in the water give him these artificial aids—and this is seldom thought rational. But there is another objection —namely, that the pupil first acquires one seat, and afterwards is expected to change it for another and better one. Why not begin at first with this ? Every practical cavalry officer knows that it is much easier to teach a man that has never been on horseback than one who has acquired methods of his own, which give the instructor the double work of unteaching and teaching. Of course if the people ride at home nearly in the same way and in the same kind of saddle that they are required to do in the ranks—as, for instance, the Hungarians, Cossacks, and others—this does not apply; but with all western nations of Europe it does. It is highly probable that the English system of hanging the stirrups far forward in the saddle has been adopted, partially at least, for the purpose of adapting these instruments to a seat acquired without them—that is to say, to a purpose they were not intended for. Long experience in training recruits has resulted in the conviction that it is much better, and in the end more expeditious, to give the young rider stirrups from the beginning; and when he has acquired a certain amount of confidence and balance you may take away the stirrups to perfect the latter, without running the least risk of destroying the former.
...
On leg and bareback riding:
The leg, from the knee downward, is much less fitted for holding or grasping than the thigh is; moreover, it has other functions to perform that interfere with this. The best hunting, steeplechase, and military riders we have ever seen, all agreed on this one point at least—that of depending on the thigh, and not the " under-leg," for their seat; and hence is derived the grand cardinal rule for a good seat: " From the hips upwards movable, in order to enable the rider to vary his balance, or use his weapons ; from the knee downward movable, for the use of the spur, and the control of the horse's hind legs; and between these two points, hip and knee, fixed, for the seat." According to this rule, the middle of the rider adheres, both by weight and muscular action, to the middle of the horse; according to the other system, the lower third of the rider clings, by muscular action alone, to the horse's shoulders, aided, perhaps, to a certain extent, by the stirrup.
But this brings us to the stirrup. Riding was certainly invented and practised before saddles existed; and it is nearly equally certain that the first saddles, pads, or whatever they were, had no stirrups, these contrivances having been subsequently invented for the purpose of giving the rider further aid in addition to that derived from balance and friction. Even nowadays many a man can ride bare-backed to hounds or in the melee without stirrups ; and this very short statement of facts ought, we think, to go far to prove that stirrups are very subordinate in value to balance and friction taken together, which is precisely why we have used the term stirrup-riding in an opprobrious sense.''
Posted by Dario T. W. at Wednesday, August 03, 2011

Do some reading. This saddle is asian, namely mongolian before it was polish. 9th c hungarians used it as well, pper archaeologicaal finds. Also huszars are originally hungarian not any other european military unit huszar is derived from the word húsz meaning 20, since

20 men belonged to a unit. Just to clarify

per the above, that is all your opinion -
Hussars are Byzantine per first historic references, and then Serbian/Bulgarian and perhaps Greek and Albanian in origin .
read carefully - this is 19th century account