one of the most interesting artefacts of the Yamnaya period in the Pontic steppe  is the stele/stelae or stone slab from Kernosovka (a village in Ukraine).

the stela is about 1,2 m high stone slab carved and sculpted; in its front there is a face, presumably of a man, with arms and a phallus under his belt. 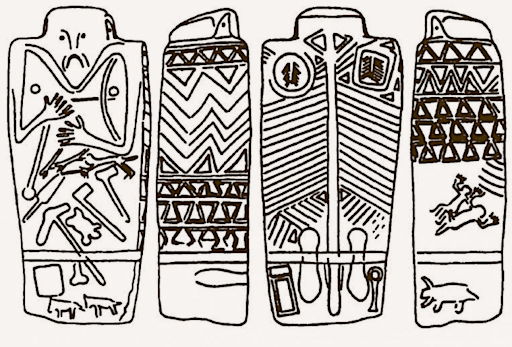 Man's face has a deep-set eyes, pointed long nose, a chin or pointed downwards beard, with a long drooping mustache. The figure has two arms bent, between the left shoulder and bent arm there is a bow with an arrow notched.  He has a belt, single one.
Under the arms and in the back of the stele there are other weapons and tools -
a battle ax

a 'spoon' for metal casting

At the bottom  there are two horses carved, and also there is an ox or bull and a turtle? .

The backs of the stele has various ornaments - perhaps representing his garments like a cow hide painted with lines ?  - and under the belt there are his spare? shoes.

Is this an image of a powerful chieftain ? The tools of metallurgy arts exemplify the  Indo-European skills with metal working, including probably the oldest iron smithing, from a meteorite iron, in Eurasia, thousand years before the Hittite ironworking in the II millennium BC.

There is this article by J.P. Mallory and D.Y. Telegin, The Anthropomorphic Stelae of the Ukraine: The Early Iconography of the Indo-Europeans, Journals of Indo-European Studies, Washington DC 1994 - but I do not have it nor have not read it. 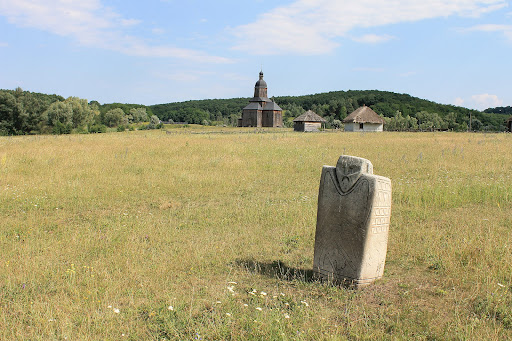 *literature for this little post -
J.P. Mallory- In Search of Indo-Europeans.
D. Anthony - The Horse, the Wheel and Language.
you can read both on archive.org