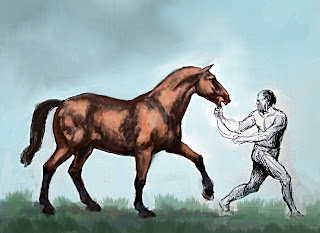 Salve,
let us return for a moment to that time  less than 2,400 years ago, of the IV century BC,  when Athenian hippeis, adventurer, philosopher and writer Xenophon (Ξενοφῶν ) wrote his famous On Horsemanship ( Peri hippikés) treatise, and I am going to 'publish' here the most relevant parts of that ancient work since this work seems to sum up the ancient  Indo-European (North Iranian, Thracian, Greek, Persian and Median) knowledge  on horses in war and parade. 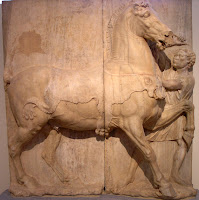 1.In regard to a colt not yet broken, it is plain that we must examine his body ; for of his temper a horse that has never been mounted can give no certain indications.

2. In respect to his body, then, we assert that we must first examine the feet; for as there would be no use in a house, though the upper parts were extremely beautiful, if the foundations were not laid as they ought to be, so there would be no profit in a war-horse, even if he had all his other parts excellent, but was unsound in the feet; for he would be unable to render any of his other good qualities effective.
3. A person may form his opinion of the feet by first examining the hoofs ; for thick hoofs are much more conducive to firmness of tread than thin ones ; and it must also not escape his notice whether the hoofs are high or low, as well before as behind ; for high hoofs raise what is called the frog ' far above the ground; and low ones tread equally on the strongest and softest part of the foot, like in-kneed men. Simon says that horses which have good feet may be known by the sound; and he says this with great justice, for a hollow hoof rings against the ground like a cymbal.
4. Since we have commenced with this part, we shall ascend from it to the rest of the body. The bones immediately above the hoofs, then, and below the fetlocks, must be neither too upright, like those of a goat (for then, being too unyielding, they shake the rider, and such legs are more subject to inflammation), nor ought those bones to be too sloping; for the fetlocks will in that case be denuded of hair and galled, if the horse be ridden either among clods or over stones.

5. Of the legs the bones ought to be thick ; for they are the supports of the body ; but it is not in veins or flesh that their thickness should consist, since, should this be the case, they must, when the horse is ridden over hard ground, be filled with blood, when hard tumours will arise, and while the whole leg is swollen, the skin will widen ; and when the skin is loose, the small bone of the leg4 often gives way, and renders the horse lame.
6. If the colt, as he walks, bends his knees freely, you may conjecture that he will have supple legs when he is ridden; for all colts in the course of time acquire greater freedom of motion in their knees ; and supple joints are justly commended, for they render a horse less likely to stumble and grow tired than stiff joints.
7. The forearms under the shoulders, if they are stout, appear stronger and more graceful, as is the case with those of men. The chest, if somewhat broad, is better adapted both for beauty and strength, as well as for keeping the legs, not so as to touch, but wide apart.
8. The neck, as it proceeds from the chest, should not fall forwards, like that of a boar, but should grow upwards like that of a cock, and should have an easy motion  at the parts about the arch. The head should be bony, and have a small cheek. Thus the neck will be directly in front of the rider,' and the eye of the animal will see what is before his feet. A horse of such a shape would be less able to do mischief, even though he be extremely vicious ; for it is not by bending, but by stretching out the neck and head, that horses attempt to be mischievous.
9. It is necessary to observe, however, whether both the fates * (On account of the smallness of the jaw, which will not obstruct his sight. Weiske ) be soft or hard, or only one of them, for horses which have not both the jaws alike are generally obstinate. To have the eye prominent gives an air of greater vigilance to a horse than to have it sunk, and a horse with such an eye can see much further than another.
10. Wide nostrils are not only better adapted for breathing than those which are contracted, but make a horse appeal more terrible; for when one horse is angry at another, or is excited in being ridden, he dilates his nostrils.
11. When the top of the head is somewhat large, and the ears rather small, they render a horse's head more like what it ought to be. The point of the shoulder being high renders the seat of the rider more secure, and makes the shoulder appear more firmly attached to the body. A double spine is both much softer to sit upon, and more pleasing to the eye, than a single one.
12. The sides being somewhat deep, and swelling towards tin belly, render a horse in general more easy to ride, and stronger, and make him appear better profited by his food. The broader and shorter the loins are, the more easily the horse raises his fore parts, and brings forward his hinder ones; and in so doing, his belly will appear smaller, which, if large, partly disfigures a horse, and renders him also weaker and less able to carry weight.
13. The haunches should be broad and well covered with flesh, that they may correspond to the sides and the chest; and if these parts are compact, they will be lighter for running, and render the horse much swifter.
14. If a horse has the thighs under the tail broad and not distorted, he will then set his hind legs well apart, and will by that means have a quicker  and firmer step, a better seat for a rider, and will be better in every respect. We may see a proof of this in men ; for when they wish to take lip anything from the ground, they try to raise it by setting their legs apart rather than by bringing them together.
15. A horse should not have large testicles; but it is impossible to tell what will be the size of them in a colt. With regard to the pasterns of the hind legs, or shins, as well as the fetlocks and hoofs, we may make the same remarks as we made concerning the fore-legs.
16. I wish also to show by what means \ person will be least likely to be deceived in regard to the probable size; for any colt that has very long legs when it is foaled will become a very large horse, since in all quadrupeds the shank-bones do not grow much as time advances, but the rest of the body, that it may be symmetrical, grows in proportion to them.
17. Those who judge in this way of the shape of a colt seem to us most likely to get a horse that has good feet, and is strong, fleshy, and of a good figure and size. Even though some horses change as they grow up, yet we may still have sufficient confidence in these observations to form a judgment; for far more horses, from being ill-shaped, become well proportioned, than grow deformed after having once been well-shaped.
The above translation is by Rev. J. S. Watson, published in 1891
link to a Spanish language scholarly article (from Gladius magazine) on the Ancient Greek riders and their 'echo' amongst the Iberians http://gladius.revistas.csic.es/index.php/gladius/article/download/29/30
ps
at the top my own little sketch of a warhorse, I hope :) and a photo of a  Hellenistic spirited war horse covered with a leopard 'schabraque' (sort of like Alexander the Great before and Hungarian, Polish and Ottoman Turkish riders during the XVI-XVIII centuries)
Posted by Dario T. W. at Saturday, August 14, 2010