How kola (Lakota greeting),
my little sketch of what various horse trainers of the XIX century perceived as  the 'Comanche war bridle'   ( the Lords of Southern Plains texasindians.com/comanche   ), just a rope  and nothing else... 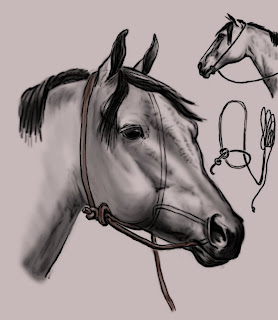 and in  Catlin's words:  ....one of their party galloped out in advance of the war-party, on a milk white horse (look at the rope trailing behind him, this was a typical arrangement, in case of falling off), carrying a piece of white buffalo skin on the point of his long lance in reply to our flag  (and a large buffalo hide shield on his back, and a rifle in a beaded holster hanging from the horn of his saddle, horned saddle with stirrups ). This moment was the commencement of one of the most thrilling and beautiful scenes I ever witnessed. All eyes, both from his own party and ours, were fixed upon the manoeuvres of this gallant little fellow, and he well knew it .  The distance between the two parties was perhaps half a mile, and that a beautiful and gently sloping prairie; over which he was for the space of a quarter of an hour, reining and spurring his maddened horse and gradually approaching us by tacking to the right and the left, like a vessel beating against the wind. He at length came prancing and leaping along till he met the flag of the regiment, when he leaned his spear (my note, look at the length of it, Catlin gives more details below)  for a moment against it, looking the bearer full in the face, when he wheeled his horse, and dashed up to Col. Dodge with his extended hand, which was instantly grasped and shaken...my eyes were fixed upon the gallant and wonderful appearance of the little fellow who bore us the white flag on the point of his lance. He rode a fine and spirited wild horse, which was as white as the drifted snow, with an exuberant mane, and its long and bushy tail sweeping the ground. In his hand he tightly drew the reins upon a heavy Spanish bit, and at every jump, plunged into the animal's sides, till they were in a gore of blood, a huge pair of spurs, plundered, no doubt, from the Spaniards in their border wars, which are continually waged on the Mexican frontiers. The eyes of this noble little steed seemed to be squeezed out of its head ; and its fright, and its agitation had brought out upon its skin a perspiration that was fretted into a white foam and lather. The warrior's quiver was slung on the warrior's back, and his bow grasped in his left hand, ready for instant use, if called for. His shield was on his arm, and across his thigh, in a beautiful cover of buckskin, his gun was slung—and in his right hand his lance of fourteen feet in length. Thus armed and equipped was this dashing cavalier; and nearly in the same manner, all the rest of the party ; and very many of them leading an extra horse, which we soon learned was the favourite war-horse (the practice of leading the war horse along, saving it for  the battle or chase only  ); and from which circumstances altogether, we soon understood that they were a war-party in search of their enemy..