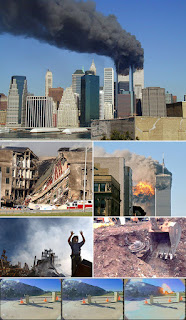 Salve,
another anniversary, and nothing has improved since that fateful date, or even it is getting worse as we speak, albeit mostly in the bloody Near East and the most confused European Union, wide open to the new Völkerwanderung. 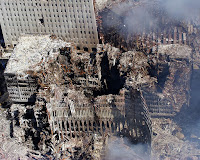 Pacem aeternam to all who perished in the Twin Towers in the morning of September, 11, 2001.

I first heard about the attack while sitting at my desk in Astoria Queens, NY and listening to the morning program at the WBAI radio station (my favorite station as for the news, health talks and computer/telephone shows etc). I ran over to the window and from this window on 5th floor I saw the second plane hit the South Tower. From then on it was between listening to the radio stations and watching the towers burning and finally collapsing.
About noon I reached Greenpoint and Williamsburg shore in Brooklyn, the streets were deserted as if the city came to a stand still, and while I was driving and then walking I watched the millions of burned paper debris in a snow-like fashion cover the streets and the shore.  There were some people there, the Williamsburg was not yest as popular as today, and we all watched in silence the heavy smoke, already miles long clod of it,  coming from beyond the East River.
My relatives and friends who worked in Manhattan were safe enough but had to walk from the Lower Manhattan to the Queensborough Bridge in order to cross into Queens and Brooklyn.
It was a mayhem.. it was a tragedy ... and travesty of ineptitude (he, he, Rudy Guliani, the 'best' mayor city could have), soon followed by looting of the stores and vaults by the looters that came on their boats and jet-skies from Brooklyn, Queens and New Jersey...
Daniel Pipes - on the volatile Near East and his predictions as to the future - here

For my Polish-speakers - a good and interesting program with prof. Franciszek Bocheński - on Radio Wnet - about the wider context of Al-Qaeda  and Daesh.

Also, in Polish , a raging issue of migrants and refugees from the wars and poverty of Western Asia and Africa  - from the Polish Parliament,    Łukasz Warzecha on media and misinformation, Witold Repetowicz on migrations,  Rafał Ziemkiewicz on the Polish (and Central European) problem with the EU leadership, especially old good Germany's drive to do away with the member states's sovereign powers.

ps
What I find most curious is that this present EU elite sentiment embodied in the German government calls for the stricter censorship of the political speech, by tightening speech controls and punishment on the social platform Facebook - and any vocal opponents of the resettlement of these migrants and few refugees within EU are called Neo-Nazis, right-wingers, hate-mongers and in general the enemies of the human race... most curious.
But then the present political system of the European Union is more akin to the corporate-bureaucratic oligarchy with socialist undertones and gender socialism flags in the background...
ps'
images from the Wikipedia Commons

There seems to be a secret war on Kurds, the ancient Medes the breeders of the Nisean/Nesean horse, carried by the Turkish government http://time.com/4030838/turkey-kurdish-rebels/ as the Kurds are the largest and most vibrant minority in Turkey, and the largest nation without its own state.

meantime in the Arabian Peninsula
http://www.independent.co.uk/news/world/europe/saudi-arabia-offers-germany-200-mosques--one-for-every-100-refugees-who-arrived-last-weekend-10495082.html

In the Polish Sejm http://www.kresy.pl/wydarzenia,polityka?zobacz%2Fsejm-posel-ryfinski-zablokowal-mownice-przywoluje-pania-marszalek-do-porzadku-video

on Sweden and their quest for racial and cultural diversity in the name of... well, whatever
http://www.theglobeandmail.com/globe-debate/swedens-ugly-immigration-problem/article26338254/