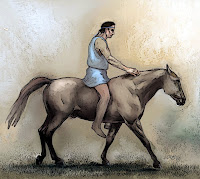 CHAPTER VII.
Of the proper mode of mounting and riding a horse. Of exercising a horse.

1. We shall now show how a rider must act, when he has received his horse for the purpose of mounting him, so In the first place, then, he must take the rein,1 which is fastened to the lower part of the bit, or to the chain that goes under the chin, in his left hand, in a convenient manner, and so loosely, that he may not, either as he raises himself by grasping the mane near the ears, or jumps on the horse's back with the assistance of his spear, pull the animal back. Then, with his right hand, let him take hold of the bridle  at the point of the shoulder, and of the mane at the same time, that he may not in any way, as he mounts, twist the horse's mouth with the bit.
2. When he has set himself at ease for mounting, let him draw up his body with his left hand, and, stretching forth his right, let him lift himself with that also (for, mounting in this way, he will not present an ungraceful appearance behind), and let him do this with his leg bent, and not rest his knees on the back of the horse, but throw his leg across at once to the right side ; and when he has passed his foot clean over, let him then seat himself on the horse's back.
3. It seems to us also very proper, in case a rider should happen to be leading his horse with his left hand, and to be holding his lance in his right, to practise mounting on the right side ;1 but for this he has nothing more to learn, than to perform those movements with his left hand and foot which he had previously performed with his right. 4. We commend such readiness in mounting for this reason, that the rider, as soon as he is seated on the horse, is in every way prepared for action, if it should be necessary to encounter an enemy on a sudden.
5. When he has taken his seat, whether on the horse's bare back or on the cloth, we do not like that he should sit as if he were on a carriage seat, but as if he were standing upright with his legs somewhat apart ; for thus he will cling more firmly to the horse with his thighs, and, keeping himself erect, he will be able to throw a javelin or to strike a blow on horseback, if it be necessary, with greater force.
6. But it is necessary to allow the leg, as well as the foot, to hang loose from the knee ; for if a rider keep his leg stiff, and strike it against anything, it may be broken ; but if the leg hangs easy, and anything strikes against it, it will yield, and yet not move the thigh from its position.
7. A rider should also accustom himself to keep the parts of his body above the hips as flexible as possible ; for he will by this means be better able to exert himself, and if any person should drag or push him, he will be less likely to be thrown off.
8. Let it be observed, too, that when he is seated on the horse's back, he must first teach the horse to stand quiet, until he has drawn up his mantle, if necessary, and adjusted the reins, and taken hold of his lance in such a way as it may most conveniently be carried. Then let him keep his left arm close to his side, for in such an attitude a rider appears most graceful, and his hand has the greatest power.

9. As to reins, we approve of such as are equally balanced, and not weak, or slippery, or too thick, so that the hand which holds them may be able also to hold the spear when it is necessary.
10. When the rider gives the signal to the horse to start, let him begin to advance at a walking pace, as this pace is least likely to disturb the horse. Let him hold the reins, if the horse is inclined to hold down his head, rather high ; but if he is more disposed to carry it erect, let him keep them lower, for thus he will best set off the horse's figure. After a little, if he trots at his natural pace, he will find his limbs become pliant without inconvenience, and will come with the greatest readiness to obey the whip. Since too, it is the most approved practice to set off towards the left side, the horse will most readily start on that side,1 if, when he lifts, as he is trotting, his right foot, the rider then give him the signal to gallop.
12. For, being then about to raise the left foot, he will thus start with that foot; and just at the moment that the rider turns him to the left, he will make the first spring  in his gallop; for a horse, when he is turned to the right, naturally leads off with the right foot, and when turned to the left, with the left foot.

13. As to the mode of exercising a horse, we approve of that which is called the 'pede' (Volte according to G. Hermann), for it accustoms a horse to be turned by both sides of his mouth ; and it is good to change the direction of his course, that both sides may receive equal stress in the different directions.
14. We approve, too, of a place of exercise of an oblong form, in preference to the round; for in the oblong the horse may be turned with the greater ease, when tired of going straight forward, and he will be exercised at once in running in a direct course and in turning.
15. It is proper also to pull in the reins as the horse turns ; for it is not easy for a horse, nor safe, when going fast, to turn in a small space,1 especially if the ground be rough or slippery.
16. But at the time that the rider pulls him in, he ought to sway the horse as little as possible with the bit, and to sway himself also as little as possible; for if he sways himself much, he may be well assured that a very small impulse will be sufficient to stretch both him and his horse on the ground.

17. When the horse, after having turned, looks straight before him, the rider should then excite him to greater speed; for it is plain that turnings are made in war either for pursuing or retreating, and hence it is good to accustom a horse, after he has turned, to increase his speed.
18. Also, when the horse appears to have been sufficiently exercised, it is useful, after having let him rest a while, to excite him on a sudden to his utmost speed, as well away from the other horses as towards them; and, after he has been put to his speed, to let him rest somewhere as near as possible, and, when he has stood still awhile, to wheel him about and urge him again to a gallop; for it is certain that occasions will offer when he will have need to practise both.
19. But when it is time to dismount, the rider should never alight either among other horses, or amidst a concourse of people, or beyond the exercise ground; but in the place where the horse is obliged to exert himself, there let him also begin to rest.