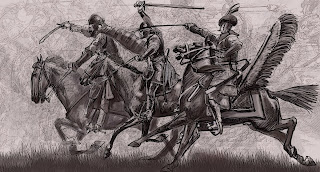 salve,
while in Poland,  and having taken the opportunity of purchasing Polish books at some much lower prices than in the US, I did buy some and now I have been reading 'Od Starduba do Moskwy', by Andrzej G. Przepiorko, published by inforteditions, a  Polish language book on military history  during the time period from after the death of the Tzar Dimitri II (known in older Russian historiography as False Dimitri I), Bolotnikov uprising against the Shuisky 'usurpation,' and  appearance of  False Dimitri II with his Polish military commanders, and  the fully blown civil war in Muscovy known as Time of Troubles - Wielka Smuta, Смутное время, that would eventually led to Polish and Swedish wars against the Muscovy etc.
What interests me during the time period of 1607-1608 is the military career of the scion  of the old Gediminid (Ruthenized Lithuanian princes) family and Polish military officer Roman Rozynski, and his brilliant military victories against  Tzar Shuisky armies.

From my perspective this time period of 1607-1608 is very interesting because of the participation of Polish mercenary  cavalry (hussars, petyhorski and cossack banners)  in these struggles, emergence of the Lisowski light cavalrymen (famous in the 30 Years War as 'Lisowczyks') and for the Polish and Lithuanian history emergence several low level  Polish cavalry officers as military leaders who would distinguish themselves as able commanders of these motley crew armies  that carried  False Dimitri II to his final capital/camp in Tushino etc.
In this context military leadership of Roman Rozynski is quite remarkable, especially during his quite amazing victory  during the two day-long battle of Bolkhov in May 1608 between the forces of legitimate Zar and Zar-pretender, or impostor if you will.

The actual battle took place some 21 km  south of Bolkhov, in the vicinity of the rivers Kamenka and Sukha, and author Andrzej Przepiorko concludes  that actual battle took place in the swampy valley  of Kamenka. The actual commander of the False Dimitri army Roman Rozynski was preparing his battle plans in face of rather overwhelming enemies. God of war Ares was sharpening his tools...
Posted by Dario T. W. at Monday, August 09, 2010

Welcome Dario
I cannot agree here with Your praise for Rozynski's skill. He was average cavalry commander, solid but without any great deeds. Lacked experience in commanding larger number of troops, his victories were mostly due to fact, that he was fighting against poorly led enemies.
He was able to win at Bolchow mostly due to better quality of his troops and really poor leadership of Muscovites armies.
Look at his next battle - at Chodynka. He have sound plan but wasn't able to execute it as planned, in effect his army, although victorious, took heavy losses, especially within Polish troops.

thanks for your comment
allow me to finish the description of the battle and then we can discuss it away, so to speak. the battle of Khodynka is not on my list though.
As per leadership and strategy - well, in war it has always been about able command, morale, bravery and planing, but luck always plays very important role.