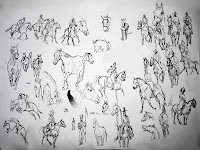 Horace Hayes in his book 'Points of horse,' published in the 1897, presented his very learned opinions regarding what a particular type of horse should have been, his description was based in his extensive travels and experiences as cavalryman, scientist,  horse trainer, equine historian etc. I am giving his horse conformation description and views here, because I think,  H. Hayes gives us a very sound opinion on what a war horse should have been built like prior to the XX century, and I think it applies to horses throughout their use in human warfare since North Iranians on the great Eurasian Steppe first took to mounted warfare,  at least 3000 years ago. Note his insistence on the trooper and officer horse's height when in war conditions, very important! The shortness of legs, and his stoutness in general, in cavalry trooper horse brings to my mind the Mongol-Tatar bachmats of the Pontic-Caspian steppe.

The Cavalry Trooper.—The ideal cavalry horse should (if price has not to be considered) be of the heavy weight (Fig. 433) or thick-set (Fig. 322) hunter type. His chief requirements as regards conformation are as follows :—
1. That he should be up to the weight he has got to carry, which is usually about 18 stone. But he should on no account be too heavily topped for his legs, or for the work he will be called upon to do. His loins, therefore, should be strong, his shoulder-blades long, and his legs should be as short as is compatible with the possession of sufficient speed for military purposes.
2. His legs and feet should be particularly sound and well able to stand work. As he will be called upon at times to go fast and to leap ; his back tendons should be more or less parallel with the cannon bone, and he should have no tendency to undue width of fetlock (p. 282, et seq.).
3. His fore-hand should be light, so that his legs and feet may continue sound, and that he may be able to do his school work properly.
4. He should have a good carriage of the head and neck, so that he may be obedient to the rein.
5. He should be a " good doer," and have a strong constitution, which will usually be the case with a horse that has a bright eye ; soft, cool skin ; deep rounded barrel (pp. 232 to 236); full flank ; firm, prominent anus; and is well ribbed up.
6. In times of peace, the height will usually vary from about 15.1 to 16 hands; but for war purposes, when endurance is of paramount importance, the height should not exceed 15.2, and may be as low as 14.1, especially if Arabs are employed.
The Officer's Charger.—A cavalry officer's first charger, with all the useful points of the cavalry trooper, should have undeniably good looks, and a showy carriage of the head and tail, which should not be docked. As he will have to carry less, and will cost considerably more than an animal in the ranks, he should be well bred, and, with a rider of ordinary weight, he should approach the type of a handsome thorough-bred hunter. A second charger should have all the useful points of a first charger ; but need not be so good-looking. The colour will, as a rule, depend on regimental regulations. Speaking generally, he should not be less than 15.3, during peace time, because a man at the head of a regiment of cavalry, or of a battery of Horse or Field Artillery, looks best on a tall horse. On a campaign, the height should be the same as that advised for a cavalry trooper.

The Artillery Horse.—Artillery horses are divided into those for Horse Artillery and those for field batteries. As the teams of the former have to manoeuvre with cavalry, and also drag their guns, they require to be exceptionally strong, smart horses. The latter, as they are supposed not to go faster than a trot, are stronger and slower horses than those of light cavalry. The wheelers are active, light-built cart-horses. For their work, they need to be somewhat thick in the shoulders, short on the leg, and of considerable weight to stop the gun when the order to halt is given. Their hind-quarters, loins, and hocks should, therefore, be particularly strong. The riding horses of the Nos. 1 and markers of field batteries should be of the light cavalry type.
The Mounted Infantry Horse should be of the same type as the cavalry charger, and should be about 14.2 high. Fig. 437 shows a good specimen of a remount, which did excellent service during the late Boer war. The pony in Fig. 438, though small, was of a useful kind, and also served in South Africa during 1900 and 1901.

The Polo Pony.—Handiness and speed, with sufficient staying and weight-carrying power, are the two chief requirements of the polo pony. Consequently, he should be light in front, should carry his head and neck well, have sloping shoulders, strong hocks, and his hind legs well under him. The fact of his being rather " goose-rumped " will be no detriment. These views are strengthened by the remarks made on pages 310 and 311 about the conformation of the zebra; for the polo pony, like his striped relative, requires great ability of suddenly stopping, turning round, and galloping off in the opposite direction. This turn has to be done chiefly on the hind legs, which in this case will be more or less bent, and will then have full power to project the pony in the new direction. The best English polo ponies, such as the once matchless Dynamite,  are animals which, but for an accident of breeding, would have been high-class hunters or brilliant chasers.
source:
Points of Horse pp392-95

another horse so called Hack  pp389
The Hack.—The chief points about the hack are that he should be " light in front," have sloping shoulders, and sound legs and feet, so that he may be sure-footed and able to stand work ; and he should be rather high in front (pp. 177 and 178). The conformation of his head and neck should be such as to allow him to bend readily to the rein. The action of the hack should be somewhat " high" and should be " true," so that, when viewed from behind, the near pair of limbs, in the walk, trot and canter, should move in a line parallel to that of the off pair. Action, good looks, and a showy carriage of the head and tail are essentials in the high-priced hack.
According to hipologist Juan Carlos Altamirano, great historian and specialist on the Pura Rasa Espanola or Spanish Horse,  the XVI century nondescript  hacks or 'haquas' imported from England, Northern Europe and Poland were foundation horses along with particular Barb, Neapolitan and Andalusian stallions and Marismenas mares when king Felipe II (Philip II) ordered creation of the breeding program at the Yeguada Real in Cordoba, Spain in 1567 AD.

H. Hayes' entire book can be read here, but my text belongs to 1904 edition and the  photos of the horses given in the text as well   http://books.google.com/books?id=P1sCAAAAYAAJ&printsec=frontcover&source=gbs_atb#v=onepage&q&f=false
ps
at the top some old sketch of mine
Posted by Dario T. W. at Friday, August 13, 2010