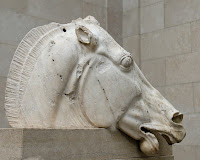 Salveos,
today we're going to continue with the most famous equestrian treatise,  Xenophon's "On Horsemanship,"  already started several days ago on my blog : http://dariocaballeros.blogspot.com/2010/08/xenophon-on-colt-young-stallion-male.html

Xenophon on  buying a horse and caring for the steed:

When buying a horse
1. When a person would buy a horse that has been already ridden, we shall subjoin some admonitions which he ought to bear in mind, if he would not be cheated in his purchase. In the first place, then, let it not escape his notice what the age is; for a horse that has no longer the marks in his teeth neither delights the buyer with hope, nor is so easy to be exchanged.
2. When his youth is ascertained, it must also be noticed how he takes the bit into his mouth, and the head-piece over his ears; and this cannot fail to be observed, if the bridle is put on in sight of the purchaser, and taken off in his sight.

3. It is also necessary to see how he takes the rider on his back ; for many horses reluctantly receive on them anything which it is plain to them that they cannot receive without being compelled to work. It must likewise be observed whether, when he is mounted, he wishes to separate himself from other horses, or whether, if he is ridden near horses standing by, he carries off his rider towards them. There are some horses too, that, from bad training, run off from the places of exercise to their stalls' at home.
5. As for horses whose jaws are not alike, that sort of riding which is called the pede3 exposes them, and, still more, a change in the direction in which they are ridden; * for many horses will not attempt to run away with their riders, unless a hard jaw, and their course directed homewards, concur to stimulate them. We ought to ascertain, also, -whether the horse, being put to his speed, is readily pulled up, and whether he submits to be turned about.
6. It is good for a purchaser not to be ignorant, moreover, whether a horse is equally willing to obey when he is roused with a blow; for a servant and an army, if disobedient, are useless, but a disobedient horse is not only useless, but ofter: plays the traitor.
7. But when we take upon ourselves to purchase a warhorse, we must make trial of him in all things in which war will make trial of him; and these are, leaping across ditches, springing over walls, jumping on to mounds, and jumping down from them; and we must try him in riding up and down to steep places and along them; for all such efforts show his spirit, whether it is bold, and whether his body is sound. 8. Yet we must not at once reject a horse that does not accomplish all these feats perfectly ; for many fail, not from being unable, but from want of training ; and if they are taught, and used, and exercised in such performances, they will execute them all well, provided they are sound in other respects, and not wanting in spirit.

9. We must however be cautious of having anything to do with horses that are naturally shy ; for horses that are excessively timorous will not only not allow the rider on their back to harm the enemy, but will often take him by surprise, and expose him to great danger,
10. We must also learn whether the horse has anything of vice either towards other horses, or towards men, and whether he is averse to being handled ; for all such defects are troublesome to his owner.
11. As to any reluctance to being bridled and mounted, and other tricks, a person will much sooner discover them, if, when the horse has been thoroughly exercised, he attempt to do to him what he did before he began to ride him; since horses that, after having been exercised, are ready to submit to exercise again, give sufficient proofs of a mettlesome spirit.

12.- To sum up all in a few words, whatever horse has good feet, is mild-tempered, sufficiently swift, is willing and able to endure fatigue, and is in the highest degree obedient, will probably give least trouble to his rider, and contribute most to his safety in military occupations. But horses that from sluggishness require a great deal of driving, or, from excess of mettle, much coaxing and care, afford plenty of employment to the rider, as well as much apprehension in time of danger. 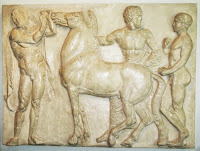 CHAPTER IV.
Attention necessary to be paid to a horse by its owner.
1. When a man has purchased a horse that he admires, and taken him home, it is proper that his stable should be in some part of the premises where the master may see him most frequently ; and it will be right for him to construct the stall in such a way that it may no more be possible for the horse's food to be stolen from the manger than the master's from his cellar. He that is neglectful of such precaution appears to me to be neglectful of himself; for it is evident that in danger the master trusts his personal safety to his horse.

2. A secure manger is not only serviceable to prevent the food from being stolen, but to let it be seen when the horse scatters his food out of the manger ;l and if a person perceives that such is the case, he may be sure, either that the horse, having too much blood in his body, requires veterinary attention, or that, from fatigue having affected him, he needs rest, or that indigestion or some other malady is coming upon him ; and it is with horses as with men, that all diseases are more easily cured at the commencement than after they have acquired strength, and mistakes have been made in the treatment of them.
3. As attention must be paid to a horse's food and exercise, that his body may be vigorous, so must care be likewise taken of his feet. Damp and smooth stable floors injure even naturally good hoofs; and to prevent them from being damp, they ought to be sloping; to prevent them from being smooth, they should have stones inserted in the ground close to one another, similar to a horse's hoofs in size; for such stable floors give firmness to the feet of horses that stand on them.
4. The groom must also lead the horse out of the stable to the place where he is to comb him ; and he should be tied away from the manger after his morning's feed, that he may come to his evening meal with the greater appetite. The ground outside the stable may be put into excellent condition, and serve to strengthen the horse's feet, if a person throws clown in it here and there four or five loads of round stones, large enough to fill the two hands, and about a pound in weight, surrounding them with an iron rim, so that they may not be scattered ; for, as the horse stands on these, he will be in much the same condition as if he were to travel part of every day on a stony road.
5. A horse must also move his hoofs when he is rubbed down, or when he is annoyed with flies, as much as when he is walking; and the stones which are thus spread about strengthen the frogs of the feet. And as we must take care of the hoofs, that they may be hard, so we must take care of the mouth, that it may be soft; and the same treatment softens the flesh of a man and the mouth of a horse.
Posted by Dario T. W. at Friday, August 20, 2010