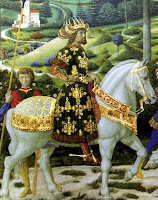 Salvete,
In my previous one  entry on the Medieval dextrarius and his lesser friends war-horse-dextrarius-opertus , I attempted to introduce the subject  of the so called  knightly 'great horse.'  I gave links to plenty many illuminations and paintings form High and Late Middle Ages showing  those artists impressions of their great horse, palfrey, courses etc.
So let us now turn the the one of the most important equestrian artwork of the XV century - the Cappella dei Magi in Florence Itally Magi_Chapel  Gozzoli_magi . Painted by Benozzo_Gozzoli one of the most gifted 'equine' Medieval painters (and disciple of the famous Florentine painter of angels, Fra Angelico)  for our purposes this series of frescoes  is a cornucopia of images of a great horse and his lesser equine friends (because the true theme of the artwork is the glory of the Sforza family with some famous characters of the era Sigismodno Pandolfo Malatesta - below on a bay horse next to Galeazzo Sforza on white one,  John VII Palaiologos on a grey horse above and in these sketches by Pisanello Sketches_of_John_VIII_Palaiologos Florence_in_1438 Pisanello  ).

Please note that both horses have bridles without a noseband, heavy curb-bit (but with short and curved shanks) and heavy, single reins. Galeazzo Sforza horse has jeweled pendant hanging from his browband.


Here another Sforza rides a roan horse with a Eastern (Turkish or Byzantine) shabraque on his steed croup. The purpose of the shabraque is clear - it is to give support and protection to a wild cat sitting there. I daresay it is a cheetah and not a leopard, as these trained felines had been used exactly for that purpose - showy and fearsome display and for going hunting while riding to the spot behind his master. This tradition of employing 'horsed' cheetah is very ancient, being used by the nomads and rulers of  Central Asia, spreading to Tang China in the east of Eurasia and to Islamic lands in the Northern Africa in the West.  This  collected roan horse and his comfortably mounted rider show high degree of schooling predating by more than a 100 years the world of Grisone and Renaissance manege schools,  and they are intentionally performing for a viewer. Again no nose band on the bridle, single heavy reins and a curb-bit with glided round 'cheekpiece'.


Here we have a great view of a croup and crouper position. The tail on this black horse is not docked, perhaps following the advice of Xenophon :

13. The haunches should be broad and well covered with flesh, that they may correspond to the sides and the chest; and if these parts are compact, they will be lighter for running, and render the horse much swifter.
14. If a horse has the thighs under the tail broad and not distorted, he will then set his hind legs well apart, and will by that means have a quicker  and firmer step, a better seat for a rider, and will be better in every respect. We may see a proof of this in men ; for when they wish to take lip anything from the ground, they try to raise it by setting their legs apart rather than by bringing them together.
15. A horse should not have large testicles; but it is impossible to tell what will be the size of them in a colt. With regard to the pasterns of the hind legs, or shins, as well as the fetlocks and hoofs, we may make the same remarks as we made concerning the fore-legs.
This rider sits comfortably, relaxed and in full control of his black horse, that has one white marking on his left hind hindleg. The one to this left, holding a chalice (?) uses one hand to control his bay horse, and  his horse's bridle set follows the other horses. Note that this horse has a star on his wide forehead and one sock on his left foreleg.

Finally white steed of Lorenzo il Magnifico,  performing a parade walk or perhaps he is pacing. Guided with one hand and rather relaxed  single but heavy reins, this horse has the most elaborate bridle and long-shanked gilded curb-bit. Stallion is looking at the road and does not appear to be in any way constrained nor fighting for control against the rider as in many modern dressage competitions. It is a beautiful view of a proud and powerful horse.
One may ask what kind of horses are ridden here? Well, the issue of horse breeding in XV century Europe, here in Italy,  is a bit complicated. Simply put we have no records of stud books and very few books on horse training written during this period. The Medieval Islamic world preserved many books of horse breeding, training and  veterinary practices, but we cannot say that about the Christian Europe. It seems that ancient Roman works and later Byzantine copies of these works were copied by hand (no printing yet) and used.  Yet from written sources and painting and illumination we can gather that  in the early XV century Italy there was a type of horse that make constant appearance in the period paintings, eg Uccello etc. Later on the name used for the Italian horses was Neapolitan horse, extolled by many writers of Renaissance and Baroque. But as we know the Kingdom of Neaples wiki/Kingdom_of_Naples was a Spanish (Aragonese) realm from the end of the XIII century, and many already famous for their beauty and spirit Iberian horses/stallions must have been brought to the kingdom by the new rulers, along with Barb stallions imported from North Africa. By breeding Iberian and Barb stallions with the southern Italian mares, famous from antiquity and during the earlier Middle Ages,   this Neapolitan horse was bred and then spread throughout the Italian Peninsula (in the early 1500 Italian prices Bona Sforza brought her husband, King Sigismund of Poland and Lithuania, many of these horses) and beyond.  We know that from the ancient times all the way through late medieval  period Northern Italy bred good horses ( eg. from Henry VIII of England records), and  that later during the XV century  northern city of Mantua was a great area of horse breeding in Italy. But the straight profile of Gozzoli's  horses is different from more Roman-nosed profile ascribed to Neapolitan horse ( cited below by  Blundeville),  so as much these stallions are some of the greatest examples of Medieval Great Horse in art,  we cannot say with certainty that they are of  of Neapolitan 'breed'  or horses of Neapolitan type bred. They actually  do resemble the famous Roman or Greek  horses of Saint Mark  and a bit different from Ucello's ones, eg Paolo_Uccello_027.jpg  ,  thus perhaps represent then existing  Northern Italian type of great horse, bred by Sforza dukes and their allies in the Northern Italy.  Last note should be on their size: none of these painted horses is taller than what 400 years later Cpt Horace Hayes prescribed for a war horse, no more than 15 hands (150-152cm) at withers. They are muscular and powerful but not tall in height. Their dimensions and relationship to their riders, painted by this Italian master, who most likely was very preoccupied with 'right' proportions and 'correct' perspective in his work,  are in agreement with archaeological finds and surviving equine armor measurements. Therefore, in my opinion these horses, as presented in frescoes of the Cappella dei Magi,  are true representation of the Great Horse of the first half of XV century..
I am going do a separate entry on the horses of Uccello, the painter of Medieval war horse.

Let us part with Thomas de Blundeville 's description of one of these Neapolitan steeds:
" being both comelie and stronglie made, and of so much goodnesse, of so gentle  a nature, and of so high a courage as anie Horse is, [...] a long slender head, the nether part whereof, taht is to say, from eies downward, for the most part is also somewhat bending like a Hawke's beak, which make him to rein with a better grace."
.

Good info, although you're clearly not schooled well in modern riding.
"Stallion is looking at the road and does not appear to be in any way constrained nor fighting for control against the rider as in many modern dressage competitions."
Proper dressage riding is not about force; in order for the horse to be correctly on the bridle, they must be light and willing through their whole body. There is no "fighting for control" as the feeling between a good dressage rider and horse is completely mutual. Horses are light on the bit because they want to be and they are allowing the rider full control in their movement. Clearly you have never ridden upper-level dressage or were never trained properly for it.

thanks for the comment -
I do not deal with so called post-Carpilli /post 1945 ridding because it has nothing to do with military riding, traditional nomadic riding, warriors and knights etc. From time to time I make references to what I see as the 'entire ocean of modern dressage folly' - and that must suffice for my comment on your comment regarding my riding and dressage - but perhaps you are right, I should stick to history and leave preset state of horsemanship alone. But I will make comments on Xenophon, Turkish-Muslim schools of the Middle Ages, Italian school of XVI century, French School of XVII and XVIII centuries, terrible injury to horses of Napoleonic period, US post 1865 cavalry, XIX century cavalry and military riding etc Ciao

Salve,
I find this comment by a equine specialist Lee (Ludvik) Stanek quite an appropriate addition to this topic of dresage : '..because horses are ridden off balance by most riders, many horses will learn to pull, especially in dressage, and for this reasons the dressage people must use all these kinds of restrains like nosebands and amplified aids like curbs and spurs in order to get done the circus stuff they call dressage.'' from his article on nosebands http://horsemanpro.com/article.htm
and here is his entire article on the so called 'classical dressage' - http://horsemanpro.com/articles2/classical-dressage.htm
pa ka

Thanks for giving such a great information about horse
waoo its amazing.. your stories are quite unique and these pictures collection just ineradicable
I'm very crazy about horses
keep doing well
horse equine tack