Polish-Lithuanian warrior with his Polish sighthound 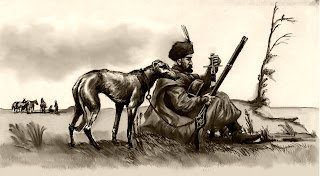 Salve,
during the XV century  through first half of  XX century Polish chart/ plural charty/  (sighthound   chart_polski/  ) was a close companion of the Polish-Lithuanian noblity, especially during their military campaigns and hunting excursions into the vastness of  our steppes and forests.

These beautiful dogs, often called wolf-hounds, as they were great against wolves,  are often present in the paintings  and memoirs (most accessible in English famous  Pasek Memoirs   page 255 )  of this bygone era.
In more modern literature, in the Polish writer Bohdan Krolikowski's cycle of fantastic and beautifully written trilogy on the Swedish and Muscovy wars of the mid XVII century, the main hero Blażej Siennicki had a near death experience while hunting with his companions and their Polish charty in the vicinity of the Swedish army, forgetting that the war was all around them.
Hunting in spite of  war all around the hunters always brings to my imagination the famous chase that Scythian nobles undertook after a hare that had appeared between their own lines and the Achaemenid Persian of Darius the Great army arrayed for battle - or so wrote in his Ἱστορίαι  Herodotos (Book IV).
Our Polish chart is a close cousin of Russian borzoi (nice little book on borzoi observed in the early XX century here  observations on Borzoi ). Nota bene Polish sighthound was often called 'Polish borzoi' (swift or fast) dog in the XIX century, and belonged to the great Asian family of  borzoi dogs (sighthounds), for  it was also a cousin of a dog from southern Ukraine called Crimean borzoi, bred by both arch-enemies and sometimes friends of their northern neighbors-  the Crimean Tatars, and the Central Asian borzoi that was bred by the Central Asian nomads from time immemorial :); also a cousin of Moldavian sighthound, Caucasus sighthound, Persian sighthound etc. 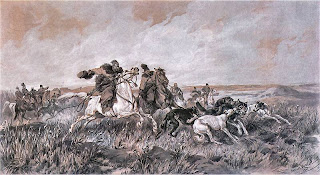 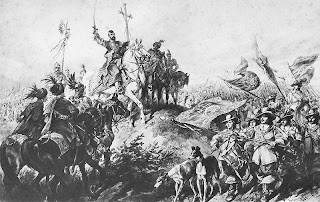 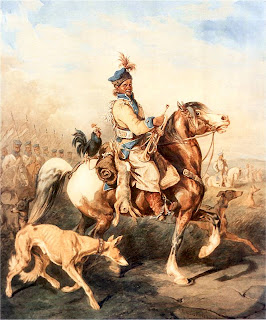 My drawing was done with a 'F' size  Rotring Artpen and watercolor brushes, and then I worked it a little bit  with GIMP Paint Studio and Wacom tablet.
Posted by Dario T. W. at Sunday, July 18, 2010

So maybe, as another idea, picture of king Jan Kazimierz and his beloved Irish wolfhound ;)

I wonder what kind of dogs (2 chart-sighthound like dogs) are in this picture - surrender of Muscovy forces at Smolensk http://upload.wikimedia.org/wikipedia/commons/1/1f/Capitulation_of_Russian_garrison_of_Smolensk_before_Vladislaus_IV_Vasa_of_Poland_1634.png

Sadly there'is incomplete link so I can only assume that You mean that (with at 4 dogs in fact...)
http://upload.wikimedia.org/wikipedia/commons/1/1f/Capitulation_of_Russian_garrison_of_Smolensk_before_Vladislaus_IV_Vasa_of_Poland_1634.png

in this picture of our most beautiful French-born queen Maria, wife to the most Sarmatian King Jan III Sobieski :), she rides with soem dogs, and a sighthound at her horse's side is rather prominent, I daresay http://upload.wikimedia.org/wikipedia/commons/b/bb/Mariakasimira1641-2.jpg

...and yes, sir, in the Smolensk painting there are four dogs, and what appears to be 2 sighthounds.
On the painting depicting queen