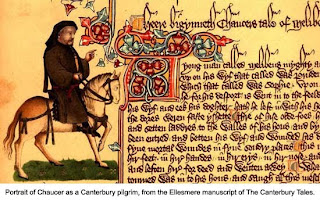 Salve,
I recently had  my son Jasio read  the kid's version by Marcian Williams   Chaucers-Canterbury-Tales-Marcia-Williams and then watch BBC series for kids  canterburytales   , versions of the  original   Chaucer's 'Canterbury Tales.' Note that an early 1900s edition of this book can be read and downloaded here - (Canterbury Tales from google)

By the way, we should remember that word 'canter' to denote a 'slow gallop' in today's  English actually comes from the ambling pace of the Canterbury pilgrims' horses - where canter is an abbreviation of word Canterbury.  Hence Canterbury gallop or Canterbury pace* were phrases applied to the easy, ambling pace at which horse ridding prilgrims went to the shrine of St. Thomas a Becket at Canterbury. As these pacing horses were gradually forced out of the breeding and training in England by the growing numbers of trotting and galloping English thoroughbreds, the term 'canter' or 'easy gallop' of these Throughbres was adopted into the English language hippological vocabulary and on vernacular vocabulary, at end of XVII century and beginning of XVIII century.

And now I found this paper by that is examining horses in Chaucer's tales Mounted Menagerie
Intriguing reading into the medieval horse world, I daresay.

Please find Chaucer's horses as described in the Tales: from the Prologue by Nevill Coghill, Penguin Classics, 1951:
The Wife of Bath
Easily on an ambling horse she sat
Well wimpled up, and on her head a hat
As broad as is a buckler or a shield;
She had a flowing mantle that concealed
Large hips, her heels spurred sharply under that."

The Merchant
There was a Merchant with a forking beard
And motley dress; high on his horse he sat,
Upon his head a Flemish beaver hat
And on his feet daintily buckled boots."
The Plowman
"He wore a tabard smock, and rode a mare."
The Reeve
"The stallion-cob he rode at a slow trot
Was dapple-grey and bore the name of Scot."
The Monk
"A monk there was, one of the finest sort
Who rode the country; hunting was his sport.
A manly man, to be an Abbot able;
Many a dainty horse he had in stable.
His bridle, when he rode, a man might hear
Jingling in a whistling wind as clear,
Aye, and as loud as does the chapel bell.....
His palfrey was as brown as is a berry."
The Skipper (sailor)
"He rode a farmer's horse as best he could."
the text above comes from this website fellpony
some images of the Tales personages
the Manciple rider I
wife of bath  rider II
rider III
knight rider IV
Posted by Dario T. W. at Monday, July 26, 2010

Very nice! I noticed in one of your links a link to the wanax bookstore. From what I could read, there's a lot of info on the 17th century that should be translated in English. it looked very good. And quite cheap as well, but unfortunatly my knowledge of Polish is almost zero.

salve,
as you correctly observed the 17th century Polish warfare has achieved lately remarkable level of notoriety via new publications. Most of these books are scholar works, master and doctoral thesis. Also medieval Polish history has been tackled, and plenty of books published on personages, arms and weapons, political history etc. It is too bad they are only in Polish, for topics are probably very interesting to many scholars and enthusiasts in Europe and Americas. But at this moment books are translated from other languages into Polish and not the other way around.
for this blog I have almost finished translating a section on the battle of Bolkhov AD 1608 between the armies of Vasiliy IV of Muscovy and False Dimitri II (his army commanded by prince Roman Rozynski), one of the more spectacular battles of the Time of Troubles... where 'private' Polish winged hussars companies fought for the Muscovy Tsar throne pretender.