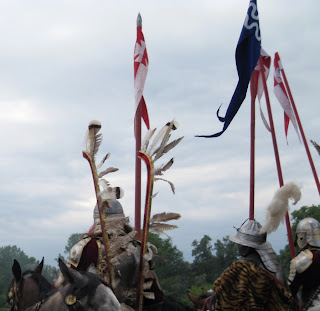 Salve,
400 anniversary of the Klushino battle took place this past weekend in Warsaw, Republic of Poland. For me this was the very first historical reenactment that I participated as a reenactor.
Many things could be said about the event and people participating in it, but definitely for me this was one very interesting meeting with the 'living history from a saddle etc. From cavalry to infantries of various nations - Czechs, Russians, Poles, Ukrainian etc - one could see how much work and passion had been dedicated to the reconstruction of the period costumes, arms and armor, camps, cooking utensils, food etc, in order to present to the modern, technology-driven world palpable and historical reconstruction of the XVII century life. There were also female camp followers and noble ladies, some dressed in  splendidly reconstructed courtly dresses etc.
Finally, the horsemen of husaria were there, in greatest numbers ever, with lances, wild pelts of animals, splendid horse tack on mostly well trained mounts, fancy weapons and armor - lovely and yet menacing sight to behold. 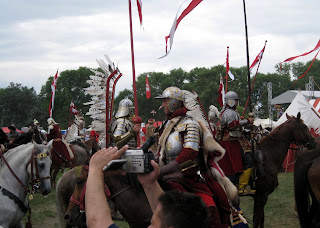 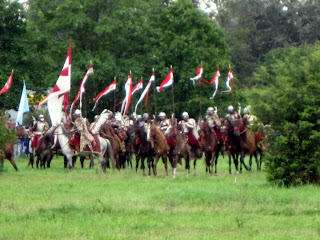 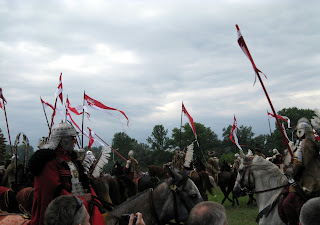 Many good people were there, eg  in the above photo Polish writer Jacek Komuda  www.samozwaniec.info/archiwum.php , wearing a delia with a fur collar over  hussar armor and nice shishak, ridding his dapple grey mare.
The principal organizer Bartek Siedlar  http://www.hussar.com.pl/13063/kluszyn-1610-2010-wasze-zdjecia-i-filmy ) was the spiritus movens of the event  and actual director of the event - that was also filmed - while I would like to especially thank Agnieszka for providing me with a nice Anglo-Arabian steed  Emir so I could ride on the battlefield and participate in some action on Sunday July 4, 2010.
I was especially impressed with  'Jareks' of Gniew Husar Banner  http://www.zamek-gniew.pl/index.php?mod=more&idsel=77 - their hussar spirit and splendid reconstruction of  husaria. 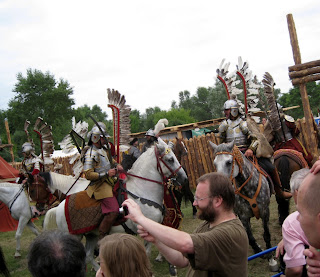 My friend Karol, Napoleonic reenactor and passionate propagator of historic riding, came to observe and we had a very interesting discussion on riding long, Xenophon, gaited horses of the past and Old Polish horsemanship with Tara and Rick Suligowski, US premier hussar, from California [sic!]
Polish, Ukrainian, Muscovite (Russian) and Czech infantry provided necessary firepower, and powder smoke at times was covering the field while cannon shots were thundering across the Vistula River meadow, where lots of debris from the Nazi Germany ruined and destroyed the Warsaw's medieval Old Town had been deposited during the post war reconstruction. Thus this past Sunday we accidentally walked and rode over some Old Warsaw stones and fragmented bricks that husaria might have walked many hundreds years ago.

Pictures posted here were taken by my niece Pati... with some help from my little son Jasio - :)
Please find linked galleries of photos taken there by various people and participants. Pictures will speak by themselves
do enjoy :)
http://picasaweb.google.com/spottheweb/2010070304BitwaPodKUszynem#
http://picasaweb.google.com/108881231175947834151/Obchody400RocznicyBitwyPodKUszynem03072010#