hello,
In the Polish and Muscovy XVI-XVII century sources the so called Turkish horses  were listed as the most splendid and notable steeds fit for the kings, magnates and noble ''rycerstwo'' (knights, chivalry, noblemen).

Being curious about the Ottoman Turkish horse origin, some time ago when I was at the McGill University Library special book collection, where one cannot use any writing tools but for their own short pencils,  I found a very interesting book.

Let's talk about the book first. At the library  I perused - in two days 1-2 hours each - this absolutely splendid and awfully overpriced book in two volumes (one text  and one fine photographs of some horse-related Islamic  artifacts) titled 'Furusiyya' - http://openlibrary.org/books/OL17608339M/Furusiyya
There I found many articles written by noted scholars on the subject of the horsemanship and horse ridding related to the present Islamic land, no matter how deeply into the pre-Islamic history, e.g. Seleucid heavy cavalry.

One of the articles written by J.M. Rogers titled 'Ottoman Furusiyya' (pages 176-183 in the vol.1) deals with XV-XVIII (15-18th) century Ottoman Turkish horses and horsemanship.
Thus I copied some information on the Turkish horses from his article:
Rogers states that the proper Turkish horses were bred in Cukurova Plain (southern fringes of the Taurus Mountains in the South-eastern Turkey or better put on the wikipedia   http://en.wikipedia.org/wiki/%C3%87ukurova ) first, and later on the rest of Anatolia became the breeding ground, while Epirus and Thesally, historic ancient Greece horse breeding grounds, continued to serve as such for the Ottomans overlords.  I can add my own thought here that this area was part of the medieval Armenian Kingdom of Cilicia, divided into ''Cilician Trachea'' and ''Cilicia Pedias.'' Cilicia Pedias became the Ottoman tributary during  XV century  perhaps as a result of wars between the Ottomans and the Mamluk Egypt, and thus Cilicia would continue in a semi-autonomous existence until her annexation by the Turks circa 1515, thus it would  seem reasonable to think that Cilician Armenians were the actual breeders of the so called 'Turkish horse.'  In my opinion (absent from the said article by Rogers) this horse breeding area and its people also  seem  to fit  nicely with  the ancient horse-breading traditions of the Armenians under the Achaemenid Persian kings and before [Urartu], and their horses are shown on the Apadana Staircase in Persepolis, Iran (via Livius  livius.org apadana armenian delegates   ). It also seems to me that great ancient traditions of the Iranian and Turkish peoples with Greek (Byzantine ) input produced this treat stead of the XV-XVII centuries.

Continuing with Rogers' article - other breeds: Arabian, Tatar and Hungarian were less numerous, but by 1650AD excessive demand for Turkish horses virtually exhausted the Anatolian breeding grounds and this led to actual replacement of the Turkish horse by the horses from the north of the Danube Basin (for the Ottoman military).
Rogers cites Busbecq ('Turkish Letters of Ogier P. de Busbecq,' 1554-62 AD)) and Marsigli ('Strato militare dell'Imporio Ottomano' Hague Amsterdam 1732 AD) as his best sources. Marsigli in his famous book stated that Turkomanian horses were very valued in the Ottoman Empire, and that the best war horses came from Hungarian, Transylvania, Polish and Moldavian stocks. Horses from Dobruja (   wikipedia.org Dobruja   )  were esteemed as parade horses (due to their size, for they were tall). According to conclusions drawn by Rogers from his sources the Arabian horses were not used for war, as they could not withstand cold and damp conditions of Turkish northern campaigns, and also were difficult on the battlefield  because were extremely afraid of the gunfire.
I could add that we known from the records that during the Vienna Campaign of 1683 AD victorious Polish commanders and noble cavalry 'towarzysze' (companions) captured some very fine Arabian horses [including mares] from the taken Turkish camp after the famous battle. Perhaps those were parade  favourites of the horse-loving Turkish commanders and warriors etc (similar to the way many men nowadays own luxury cars without really driving them daily).

Rogers also writes that Turkish horses were shod  with shoes that were continuous and solid (so no stumbling and damage to the frog etc). According to his sources Turkish horses were used up to 28-30 years of age, fed on hay and barley, while their straw bed was made from dried horse manure (similar to the Persian Turkoman traditions).

The rest of the article dealt mostly with the  different Ottoman warrior and soldier types eg voynuks , akinjis, sipahi etc,  the cavalry of the standing armies of the Ottoman state - Kapikulu  Corps (eg sipahi in reconstruction ) - and its  cavalry branch, subject that I will indulge more in the future. Also I will introduce the writings of a Polish and Ukrainian writer and ' un caballeros supremo' Michal Czaykowski (Sadyk Pasha aka  Mehmet Sadık Paşa   books.google.com Czaykowski biografia )  who while being a Turkish cavalry commander in the mid-XIX century wrote about the pitiful state of the regular Turkish cavalry of the late Ottoman period, but was extolling Balkan horses and Circassian and Turkoman horses...
pa ka

ps
aha, I am working on this sketch of a saddled XVII century horse, it is not finished yet  ... GIMP and MyPaint :) 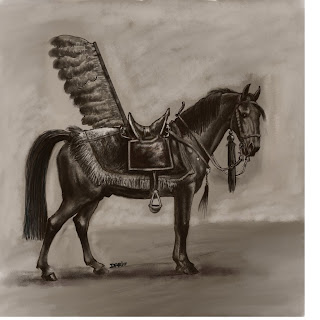 Splendid article and intriguing research ! You mentioned "Ottoman Furusiyya"... does Rogers in his article say something about the infamous Balkan Deli (Zatocnici) cavalry ? ("Ottoman Hussars")

thanks!
well as per Balkan Deli nothing out of ordinary - I would say the most interesting part of his article was the section on horses. I have to peruse Zdzislaw Zygulski Jr works - he has written several books dealing with the Ottoman Turkish military - to see if he goes any deeper into this subject, i.e. Delier.

Is there any information concerning the structure of horse breeding under Ottomans? After reading Halil Inalchik I've got the impression, that it should be coducted primarily by a sort of specialized breeders, possibly from nations and families used to it, as Turkmenian nomads settled within the Empire, possible Armenians as you write (albeit how it could be if they remained Christians..? Already in Crusades times Armenians were reknown food soldiers, not cavalryman. Even in Armenia proper, in Karabach region, it was local Muslims who breed their higly vlued mountain breed...) or some others group. This should be structured somehow. In a form of local gildes? Is there any reference to some sort of archives?

Jacku,
I do not know that yet - my 'research' is not completed. But from different scholarly works I have read it seems that many aspects of the Ottoman Empire are still under-researched and in need of study, particularly the gigantic Ottoman archives in Istanbul that have been very lightly 'touched' by scholars.
as per Cilician Armenians as horse breeders it was my guess based on their ancient and medieval history... The Armenians of the later Ottomans (XVII and XVIII centuries) they are a completely different folk, de-militarized it you will.
I daresay the Ottoman horse breeding in Anatolia in XV and XVI centuries could have been probably done based on an individual estate owner bases and by the peasant 'serfs' who owed tribute to him, as part of the tribute owed to the Emperor (Sultan), initially quite similar to inherited timariot Byzantine system. I am not sure how Turkoman tribes paid their tribute, i.e., in life stock, money or military service. It should noted that XVI century wars with Safavid Persia and subsequent conquests of eastern Anatolia most likely added more Turkoman and Persian ( heavier )horses to the Turkish stocks... But also the wars in Anatolia caused depression and wide spread unrest (and frequent revolts) in Anatolia amongst the tribute paying land owenrs and peasants and most likely severely disrupted the horse breeding etc. I am reading more on the subject so I shall return to the Ottoman horse and its breeding. In this post I wanted to note the absence of the Arab horse in the context of the XV-XVII century Ottoman military, and reasons for it..
There is a curious anecdote from the later times - XIX century - on how good horse breeding grounds were chosen - namely, many pieces of meat would be hung in various places of a valley etc, and the area where there was the least amount of flies on this raw meat was chosen for a new horse breeding farm...