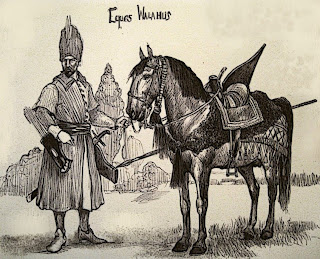 Salve,
early this month  I did some travel across the Big Pond and while on a plane I was working, with  a ball pen, on my quick sketch done after  the  plate 111 in the  monumental work 'Zolnierz Polski,' vol 1 (Polish Soldier) by colonel Bronislaw Gembarzewski.

In the original plate mosci Gembarzewski drew two Wallachian ( Wallachia  ) warriors after 1581 print by Abraham de Bruyn.
I drew the horse and some of its tack after the Gembarzewski's Figure A, in turn  itself  based on de Bruyn's one  titled 'Eques Walachus'. The rider's costume is done after the Figure B from the same de Bruyn's plate, titled 'Militis ex Walachia vestitus' (knight/warrior dressed in the Wallachian fashion).
Bows and arrows. short lance, horse curb-bit, the saddle etc are my own additions. I drew the Balkan shield attached on the the right side behind the saddle in order to show more saddle etc. The stirrup probably should be rounder, and I will change that on my color version of this drawing.
I run my drawing through the GIMP Paint Studio cartoon filter to give a bit of a woodcut look.
I hoping to draw more horse and rider figures after mosci Gembarzewski's work in the coming months.
Posted by Dario T. W. at Sunday, July 18, 2010