China I - Tang Taizong and his steeds 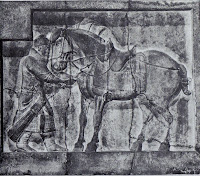 Salve,
I am planing to start blogging more about the Eastern Eurasian Steppe, the Altai Saka, Xiongnu, Tocharians of Eastern Turkestan, Turkic empires, Mongolian and Chinese cavalry and horsemanship. While I am not planing to abandon European knights and horses, I think I must devote much more space and time to these splendid cavaliers of the Ordos Steppe and Orkhon River plains.

Actually, I am very fascinated with the early nomads of the eastern Eurasia, especially the Upper Altai of South Siberia during the Bronze Age and in the first millennium BC . And in the light of their development in the arts of horsemanship and horse tack, their ( Saka and Xiongnu) influence on their southern neighbours - the Chin, Han, Sui and Tang Chinese, and the Koreans and Tibetans.
I have been working on some illustrations showing Tang and Sui Chinese horse tack based on their art, especially the famous sculpted horses. We shall revisit writings of Karl Hrinz Ranitzsch, Albert Dien, Di Cosmo, and other scholars studying Han, Sui and Tang Chinese cavalries (that were not necessarily Han Chinese per se, but included Saka, Tocharians, Xiongnu, Persians, Uigurs, Turks, Tibetans etc).
So let us treat this entry as a introduction to the subject or perhaps rather an announcement. And in order to put some cream on this bland cake :) let me provide you with a link to the fascinating subject regarding my most favorite emperor of the Chinese history - Tang Taizong http://en.wikipedia.org/wiki/Emperor_Taizong_of_Tang - and his six horses.
This link comes via Facebook from Penn State and it is the entire dissertation of Xiugin Zhou on the Tang Taizong mausoleum to himself and his six steeds - tang taizong horses
http://www.facebook.com/note_redirect.php?note_id=115480258202&h=b0fb8c794d67ba8b6b81c9cdfb099f60&url=http%3A%2F%2Fwww.sino-platonic.org%2Fcomplete%2Fspp187_taizong_emperor.pdf

In addition there is this essential work on the Eastern Eurasian horse warriors and their swords during the ancient and early medieval periods - titled 'The Long Sword and Scabbard Slide in Asia'by William Trousdale, profusely illustrated with period images smithsoniananthropologyTrousdale
http://www.sil.si.edu/smithsoniancontributions/anthropology/SC_Abstract.cfm

ps
for some reason my links did not want to display themselves properly so I am attaching them for a 'copy and paste' 'linking'
Posted by Dario T. W. at Tuesday, July 20, 2010

Glad to see you are going to cover these peoples.
Can't wait to see your Sui and Tang drawings!!
Sadly Tang cataphract warriors are often pictured wearing Sui armour. In the beginning they did, but soon they had their own typical lamellar armour.
I hope you won't forget to do the Xianbei/Hsien-pi nomads who brought the cataphract armour to China and founded the Northern Dynasties (see Osprey book Imperial Chinese armies 200BC-589AD, plate F: cataphract warrior)It's a pitty though the cataphract in the picture is wearing a leather hood instead of a leather or metal neck collar. These collars clearly can be seen in many Northern Wei terra cotta figures (grave guardians).Armoured boots, which was a Xiongnu practise and probably adopted by the Xianbei,also would have been better than the shoes pictured.This practise was also adopted by the later Tang.

As for Taizong, a while ago there was a great documentary about his necropolis on ARTE tv. It's a pitty I was too late to tape it.

I have problems with copying and opening the Smithsonian-link. Are there pictures of armour to see here and what do I have to do to get on the site?
Thanks
Hope to see drawings soon.
Greetings

hello Philip
I am working on them,mostly by drawing different Tang and Sui sculptures etc
The link to Trousdale is adapted, it will open as pdf if you click on it.
It is one great book on the swords and military of Central Asia, you should enjoy it.
I have the Osprey book and I will pay close attention to these figures. I will look closer to look to these neck collars - by the way the Kizil cave drawings are particularity interesting.
Hsien-pi and Northern Wei are a must, but I am sort of short on their images, as my research is not done yet for those illustrations
thank you for the comments, as usual very insightful and thought provoking,

Don't know if you have this book by Albert Dien. On page 226 you can see a reconstruction of a Xianbei mounted warrior. The neck collar is clearly visible here.
Compare the helmet with the one in the Osprey book (plate F). It's also of metal plate construction, but has 2 rows of lamellar scales attached to it! These scales are missing in the Osprey drawing.
In her work on Korean and Japanese armour, Gina L. Barnes also regards this helmet as a true Xianbei helmet.
The armoured chaps reaching till just below the knees are also clearly visible.
Greetings

hi Philip,
I do have this one, unfortunately, and the free preview ends on page 161, but thank you very much!
perhaps you could email me some of these dario966 (at sign) gmail.com

it appears that the link to the Tang Taizong and his horses phd thesis by Xugin Zhou is not working http://www.facebook.com/note_redirect.php?note_id=115480258202&h=b0fb8c794d67ba8b6b81c9cdfb099f60&url=http%3A%2F%2Fwww.sino-platonic.org%2Fcomplete%2Fspp187_taizong_emperor.pdf I hope this is only temporary. I will monitor this issue and hopefully this link will be made available again. I have the missing thesis in pdf so I can discuss it here some time later. the Penn State repository is here http://repository.upenn.edu/dissertations/AAI3309533/