I have read this interesting article on Buskashi and Polo http://www.cambridgeblog.org/2009/04/buzkashi-and-polo/ written by dr Pita Kelekna, anthropologist and author of the forthcoming book 'The Horse in Human History.'
In the article, which is a part of series of articles on the horse theme & the forthcoming book  presented as a series of blog entries (quite clever and nicely introducing her book to the wider world), dr Pita writes about  the two other most ancient equestrian games Buzkashi and polo, since the first and foremost horse 'games' were obviously: horse racing, horse breaking, target shooting from horseback, and communal hunting.
Mounted warfare was the culminating and glorious end-result of all these games.

Today I just wanted to post some information about the ancient history of the Iranian game of Polo.

Actually, 'Gu-u-Chogan' is the Iranian name for Polo, while name 'polo' is a Tibetan name for a polo ball made from a willow root. 'Gu' means a ball and 'Chogan' means a stick, so it is a game of ball and stick played while ridding a horse  that after all is a player too :) 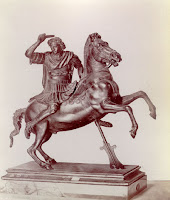 Polo is as Iranian (whether Persian o North-Iranian - Scythian and Sarmatian - is unknown) as a Persian carpet, or a Kantus (Median cloak that had become nomad attire for thousands of years, and in the 16th century ended up in Poland as a part of national costume known as Kontusz)) or a meydan (polo field).

Actually, the first accounts of the existence of chogan or the stick and ball game came from the time of Achaemenid Shah (king) Darius (Darayavaush) the Great (522- 486 B.C.).
And 2 centuries later his namesake & of the same dynasty, Darius III  sent Alexander of Macedon a polo mallet (chogan) and a ball (gu) with an invitation to play polo match instead of fighting battles. As we have learned in 5th grade (at least in the Polish elementary schools' history class) this particular handsome & chivalrous  invitation did not work and Alexander took his lance and galloped on ( a Thracian, Tessalian or Nissean stallion Bucephallas, as seen in this image from the Naples Museum in Italy) across the Achamenid Empire and eventually did conquer the whole Achaemenid world and beyond. As result the Greeks and Hellenic culture spread as far east as northern India and Afghanistan while eastern (Buddhism etc) influences filtered west into the Hellenic thought and culture.
I will write some day on Eummenes of Bactria, Ghandara, Indo-Sakas, Kushans and other equestrian rulers of that part of the ancient world.

Ad rem, there are other numerous mentions of the chogan/polo in the ancient Sassanian Persia, starting with the reign of Ardeshir, the first of Sassanian kings.
The slayer of Romans and builder of cities shah Shapur I (r. AD 226–241 and I will write about him soon, there are images of him ridding his stallions, he was a dashing warrior) when a young boy, he  was tested whether he was the real son of the already mentioned king Ardashir by use of his daring and courage during a game of polo.
Shah Shapur II (AD 309 to 379), another Sassanian ruler of Persia, learned to play the game of polo at the age of seven.
Finally, at the Sassanian courts the noble women played polo in the 'meydan' as well. The most famous of these aristocratic women was beautiful princes Shireen who played many a prince.
Also, the ancient Pehlevi text and later Persian chronicler al-Tabari confirm that when the future hunter-king Bahram V Gur( r.421–438)
http://upload.wikimedia.org/wikipedia/commons/0/01/Bahramv.jpg
was growing up he received three tutors in the arts of: reading, hunting, and polo along with skills of weapons.

So going forward just a little bit we end up with the most masterful Persian epic Shahnameh that was composed in the late 10th century.  The native Persian court poet Ferdowsi wrote into the Shahnameh plenty of references about the chogan game, by then played already in the courts of imperial China, Japan, Central Asia courts, and the Arab caliphate etc but we should remember that he wrote his epic 1500 years after the first mention of the game, as I have shown above. 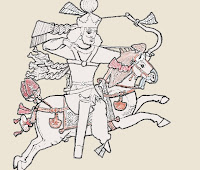 Along this little introduction of the ancient polo, I am adding my own 'tracing' of one of the prime examples of the Sassanian sumptuous art - in form of metal plates with etchings or etchings and relief inside the metal plate - this website has many of them http://www.cais-soas.com/CAIS/virtual_museum/sasanian/Artifacts/metalwork.htm I am going to do a separate post about this plate and many others, God willing.
But note this king rides a stallion, the horse's mane has been crenelated in a manner most ancient to the Iranian nomads, his tail tied and adorned with ribbons (swallow tail shape, perhaps to represent the swiftness of that bird to  give a horse more swiftness as in the American Indian belief), there is an early curb-bit along with a metal cavesson muzzle and no forehead strap or nose band (cavesson replaced it), but there is a strap under the mandible in the same fashion as seen on the Persepolis relieves(5th century BC) . The cinch seems to be of some fabric and not of leather. Discs adorn breastplate and crouper, similar to the Roman and later Hunnish horse harness styles. There may be a tamga - horse owner mark - on this stallion chest. I did not concentrate on the rider so he is rendered rather elementarily.
enjoy
Posted by Dario T. W. at Sunday, April 19, 2009

Very cool. I am currently fascinated by Polo. An acquaintance was working on a documentary about the origins of polo in Manipur. I saw some rough footage, but not sure what happened to that project.

Love your more-frequently updated blog! Your art is brilliant!

Girasol,
thanks again for your visits and comments :) dziekuje,
merci, gracias, dziekuje Спасибо

UNESCO has recognized the team sport of polo, played on horseback, as Iran’s intangible cultural heritage during a session held in South Korea on December 7.
https://kavehfarrokh.com/uncategorized/unesco-recognition-of-polo-chogan-as-a-sport-originating-in-iran/