Neo-Assyrian kingdom and her neighbors equids

Salve,
Neo-Assyrian Kigdom ( List of Assyrian kings  ) and its  art ( wiki/Neo-Assyrian_Empire   books.google Arts of Assyria  ) always invokes the strongest feelings because of a degree of brutality shown (in this XIX century book there are many images taken from Assyrian sculptures showing that side of their art  Assyria  ).
But at the same time their art is the best place where to find images of fabulous horses, horse tack and ample evidence of horsemanship for the period between 900 to 600 ( I millennium) BC (BCE).
From the cuneiform tablets we can learn that the best breeding ground for the  horses were in Mannea, east and south of Lake Urmia (  wiki/Lake_urmia  ).  Their horsemen were allegedly the first non-steppe cavalry organized in the so called civilized world of Western Asia, and their art gives ample proof of gradual changes in the horse tack, seat and weaponry and armour for these horsemen.
Paintings from Til Barsip, strategic Assyrian stronghold  located along the eastern bank of the Euphrates River, c.100km northeast of Aleppo, Syria, provide beautiful examples of Assyrian horses and their tack eg til barsip chariot  some originals at Louvre and Aleppo Museum, many paintings copied by Lucien Cavro (I got mine from Andre Parrot, The Arts of Assyria Arts Assyria Parrot  )
Assyria had many enemies, including Egypt, Syrian princedoms, Elam  iranica.com elam , desert nomads, Medes, Persians, Anatolians, Babylonians to name a few. War was essential to their survival and wealth, while a mighty stallion, whether mounted or pulling a chariot, was the symbol of it.

'Horse' books to read : 'Selected writings on chariots and other early vehicles, riding and harness' Littauer et al    Hyland Horse in the Ancient World   Azzaroli
Finally, from Assyria we get the very first image (during the reign of Ashurnasirpal II or Shalmaneser III  - palace at Nimrud, ancient Kalhu) of so called 'Parthian Shot,' a tactic of turning around in the 'saddle' and shooting arrows,  from one's bow while  sitting astride a cantering or  galloping horse, at the pursing enemy.
Here, the  Assyrian royal chariot is pursuing these most likely Iranian Skuda mounted riders and one of  them is about to fire his arrow at the chariot crew. 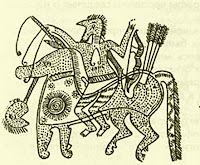 attacked and wrecked the kingdoms of  Assyria's enemies from Anatolia -   kingdom of Urartu and Phrygia  and  Mushki, but then next wave of these horsemen  lent their hands and bows   (in alliance with the Medes, who had finished off Urartu iranica.com/articles/media ) to the final destruction of  Assyria herself, at the end of the VII century,  and  the fall of the city of Harran marks the end of the Neo-Assyrian empire. Assyrian art would later surface in the Persian arts of the Achaemenid Empire etc.
Posted by Dario T. W. at Friday, July 23, 2010