Salve,
I have not written specifically yet about the history of the Polish-Lithuanian Tatars but here and there I have been making references to their presence in our Polish history and culture.

''Risâle-i Tatar-i-Lech'' or the "Treatise on the Tatars of Poland" (not Lithuania!, mind you -:) ) is a Turkish language manuscript written in 1557/8 by an anonymous Polish Tatar pilgrim (bound for the Holy City of Mecca) for the Grand Vizier Rustem Pasha Opukovic (minister to greatest Ottoman emperor Kānūnī Sultān Suleimān). I re-discovered it (for you and I ) and now would like to share with you ( examples of English language  books that mention this work - Muslims in Poland , Religious Language of a Belorussian Tatar Kitab) - caveat - you need to read Polish or translate it word for word for it is a Polish XIX century translation:  Antoni Muchliński, ''Zdanie sprawy o Tatarach litewskich,'' published in ''Teka Wileńska,'' vol 5, 1858 printed by Marcinkowski Print Shop (Wilno -now Vilnus - was one of the centres of Polish culture in XIX century, and our scholar and famous XIX century Orientalist pan Antoni saw no reason to write Polish Tatars in his translation since Polish and Lithuanian were synonyms at that time for one nation - see Adam Mickiewicz, Invocation to 'Pan Tadeusz,' starting O Lithuania, my fatherland! You are like health; , unfortunately the most cruel XX century changed that)
I will try and translate a few portions of the manuscript as it is an early portrait of our Tatars - and for me, this has more significance because my wife is of the Polish-Lithuanian Tatar ancestry.
+++

But allow me use this happy moment of re-discovering this book and let us turn for a moment to the term ''Lipka Tatars''  as you will find no mention in the 'Risale Tatar-i-Lech' of Lipka (Turkish name for Duchy Lithuanian) in the ''Risâle-i Tatar-i-Lech'' and throw some light on the history of the term - so generously used by Nobel prize winner Henryk Sienkiewicz in his 'Trylogy.' - epic adventure novels set in XVII century Polish-Lithuanian Commonwealth.
*
The most esteemed Polish-Lithuanian Tatar scholar Stanisław Kryczyński [Radwan Coat of Arms)wrote in his groundbreaking monograph on the history of the Lithuanian Tatars (Warsaw 1938) that the term ''Lipkowie'' (plural for Lipka Tatars, singular is 'Lipek'/Libek') was a loan word from the Crimean Tatar/Ottoman Turkish diplomatic missives  (starting in the 1520s AD) to the Polish Kings [who at them sam time were Grand Dukes of Lithuania], where amongst others  when referring to the history of diplomatic relations between the parties the Turkish clerks called  'Libkanum beyi'  the famous (and quite treacherous but he was playing 'big politcs' with the Holy Roman Empire , Teutonic Knights, Golden Horde and his cousin our king Władysław Jagiellon's treacherous cousin Lithuanian prince Witold Kiejstutowicz (Vitold/Vytatuas but ''Wattad'' in Crimean Tatar), and 'Libka' was the name the Ottoman Sultan and/or the Crimean Khan chanceries used for Duchy of Lithuania .
Thus during the course of XVI century the Ottoman/Crimean writers in their diplomatic letters to Kings of Poland changed the name 'Litva-Tatari' to ''Libka Tatarlar'' and continued using it alone in the correspondence until in the 1650s when the Polish-Lithuanian chancery adopted the Turkish name for out Tatars and finally started using it as well. With the mutiny and rebellion of the Tatar and 'Czeremisi'/Cheremiss companies/banners in 1670s and these rebels crossing over to the Ottomans, the term Libkowie or Lipkowie was adopted into our everyday language denoting these turn-coat Tatar soldiers at first, and then all our Tatars  (variations are 'Libka,' 'Lipka,' 'Łubka,' 'Łupka Tatar')  - said Pan Kryczński.   But this only happened in 1670s and after.
Balkan historian and Ottoman politician Demetrie Kantemir in his "History of Ottoman State" published in 1745 (in German) wrote about this etymological transformation and thus introduced this term to the Western historiography.
Prior to this period -1670s-1740s, our writers, chroniclers, heraldry researchers and diplomats, court documents and private correspondence [ starting in XV century  until the 1650s-70s] used name ''Tatarzy Litewscy'' Lithuanian Tatars (to name a few more famous writers of the XV- mid XVII century period - Jan Długosz, Kromer, hetman Tarnowski, rotmistrz Pretwicz , Bielski, Heidenstein, Strykowski, Paprocki, Pasek, Sobieski, hetman Żólkiewski , Fredro  Łoś etc).

Another noted Polish-Lithuanian Tatar history scholar pan Piotr Borawski, in his monograph (Warszawa 1986) ''Tatarzy w Dawnej Rzeczypospolitej,'' goes even further and states that term ''Lipkowie'' was used for the Tatar/Cheremiss (Mari)/Cherkiess settlers who settled around castles of Bar (Podolia) now in Ukraine  and Ostróg (Volhynia) now Ostroh in Ukraine and in general around Podole/Podolia abd Wołyń /Volhynia during XVI century about and after Volhynia  became part of the Kingdom of Poland, so technically they were not part of the old , duke Vitold's Lithuanian Tatars, but rather new arrivals from the steppe, from the defunct Golden Horde, the Volga steppe and the north Pontic steppe [one day I will go into the various Tatar entities around the Pontic). He states further that term 'Lipkowie' was used for the Cheremiss settlers (who around 1610 reverted back to pastoralism across Polish Ukraine and further south once again) exclusively  in the Polish primary materials during the period, and later, during the Lipków's Rebellion this generic name  was transformed to the entire Commonwealth Tatar population; and that he is not sure, as sure was Kryczński before him, where the name comes from.   Please note that the majority of the rebellious companies some (3000 soldiers with families) that crossed over to the Ottomans  in 1671/72, came from the Polish Kingdom i.e., Volhynia and Podolia, and not from settlements further to the north, i.e., Duchy of Lithuania.  Also, in light of the  state of historiography in the German states (that prior to Jan Sobieski's reign German language writers had the most knowledge and info on Poland) between XV to mid-XVII centuries regarding Polish Kingdom and its inhabitants, one would be really fishing in the desert expecting that the German chroniclers and writers, contemporary to Jan Dlugosz or Marcin Bielski, or eg  works compiled in Sricptores Rerum Prussicarum, to have used name 'Lipka/Libka' for the Lithuanian Tatars during the XV or XVI centuries.
*
Hence, using term Lipka (again the German variation of our Lipkowie/Lipek) for the  Lithuanian Tatars prior to the Lipka Rebelion of 1671/2 is not consistent with the historiography and it's use for Poland and Polish-Lithuanian Commonwealth, unless it will be used when writing from the position of the Ottoman/Crimean Tatar historiography, and even then it would be appropriate to use it only for the period after 1520s. Especially use of the term 'Lipka' for the Polish-Lithuanian Tatars (often found in the English language books and articles) when referring to XV-XVI century and Polish-Teutonic Order wars is anachronistic and inappropriate. 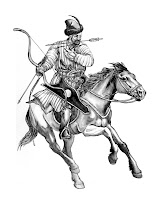 Perhaps you know, that an outstanding Tatar historian-scientist D. Iskhakov wrote in 2000: “the real history of Tatars, of the people in every respect historical, is not written yet”.
However, recently was published an above mentioned book by Galy Yenikeyev, about the unwritten (hidden) real history of Tatars.
There are a lot of previously little-known historical facts, as well as 16 maps and illustrations in this book.
This book presents a new, or rather "well-forgotten old" information about the true history of the Tatars and other Turkic peoples.
It must be said, that there are many pro-Chinese and Persian falsifications of the "wild nomads" etc. in the official history.
Therefore, primarily we should know the truth about the meaning of the names "Mongol" and "Tatar" (“Tartar") in the medieval Eurasia:
the name "Mongol" until the 17th-18th centuries meant belonging to a political community, and was not the ethnic name. While “the name "Tatar" was “the name of the native ethnos (nation) of Genghis Khan …” , “…Genghis Khan and his people did not speak the language, which we now call the "Mongolian”…" (Russian academic-orientalist V.P.Vasiliev, 19th century). This is also confirmed by many other little known facts.
So in fact Genghis Khan was a Tatar and a great leader of the all Turkic peoples. But with time many of his descendants and tribesmen became spiritually disabled and forgot him and his invaluable doctrine and covenants... Tatars of Genghis Khan -medieval Tatars - were one of the Turkic nations, whose descendants now live in many of the fraternal Turkic peoples of Eurasia - among the Tatars, Kazakhs, Bashkirs, Uighurs, and many others.
And few people know that the ethnos of medieval Tatars, which stopped the expansion of the Persians and the Chinese to the West of the World in Medieval centuries, is still alive. Despite the politicians of the tsars Romanovs and Bolsheviks dictators had divided and scattered this ethnos to different nations...
About everything above mentioned and a lot of the true history of the Tatars and other fraternal Turkic peoples, which was hidden from us, had been written, in detail and proved, in the book "Forgotten Heritage of Tatars" (by Galy Yenikeyev).
There are a lot of previously little-known historical facts, as well as 16 maps and illustrations in this book.
This e-book you can easily find in the Internet, on Smashwords company website: https://www.smashwords.com/profile/view/MIG17