the tilt at Quintain in the early modern England

Salvete Omnes,
a short post or perhaps not so short - :)
one of the great and rather fundamental exercise to learn and to hone one's  skills with a lance while on horseback was the tilt at the 'quitain.'
Samuel Johnson (1805) in his A Dictionary of the English Language has this definition -
Quintain - a post with a turning top, and the he tells us to look up a Quintin -
An upright post, on the top of which a cross post turned upon a pin; at one end of the cross post was a broad board, and at the other a heavy sand bag: the play was to ride against the broad end with a lance, and pass by before the sand bag, coming round, should strike the tilter on the back. 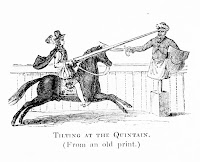 I have been perusing the Wiki Commons collections and came across this image of a quintain: 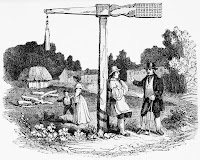 Apparently this Kentish village's quintain is quite old, as the ancient   lance exercise - tilting at the quintain - had been alive into the early modern or even post-Puritan revolution (aka English Civil War) period.
well, I say that because it appears that during the later part of  XVII century there was still some practice with lances (ok, strong poles or staves) in the countryside.

For evidence we have this interesting description taken from 'The Natural History of Oxfordshire' (Robert Plot, 1677):
''They first set a post perpendicularly into the ground, and then place a slender piece of timber on the top of it on a spindle, with a board nailed to it on one end, and a bag of sand hanging at the other; against this board they antiently rode with spears. Now, as I saw it at Deddington on this county, only with strong staves, which violently bring about the bag of sand, if they make not good speed away, it strikes them in the neck or shoulders, and sometimes knocks them off their horses; the great design of this sport being to try the agility both of horse and man, and to break the board, which whoever does is for that time accounted princeps juventutis. It is now only in request at marriages, and set up in the way for young men to ride at as they carry home the bride, he that breaks the board being counted the best man.''

In 1813 J.N. Brewer (Topography of Oxfordshire) remarked that ''the sport is now  entirely disused, and the oldest man in the town does not remember to have heard his father mention the custom in any other than a traditional way.''

Curiously, during the Peninsular War the British and Spanish forces were truncated more than a dozen times by the Polish lancers in the French service.
In 1816 some of the British cavalry regiments (eg 12th  Royal Lancers, 16th Queen's Lancers  ) became lancer regiments, and tilting must have resumed as part of the training.

a photo of modern reenactment from the famous Malbork castle in Poland (naturally famous for the Teutonic Kinghts, but also the seat of the Malbork voivodeship in the Polish Kingdom AD1466-1772)

I have "tentpegged" with lance and sword when I was in my teens and early twenties in competition in Australia, I rode a very intelligent horse who would naturally line up with the pegs, after many hours of practice I could release the reins and guide him with my legs, we became very proficienct and I won a indivual trophy "golden lance" when I was 21. Later in my forties I again started riding and a friend was learning to joust, I helped her build a Quintain from a few images, she later became the Australian female jousting champion.

Hi Matt,
thank you for reading and commenting on my blog!
all the best to all Down Under horse riders
- :)
I will provide, hopefully, more sources of the quintain etc and the English 'speare', (naturally the Polish and Crimean Tatar or Ottoman Turkish too )